Emmy-winning Hollywood makeup effects artist John Vulich, who had credits on television shows such as Buffy and The X-Files, has passed away. 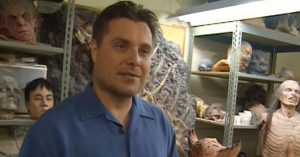 Mr Vulich came into the film and television industry in the 1980’s, working on projects such as Romero’s Day Of The Dead, Richard Donner’s The Lost Boys, and horror films such as Troll and Fright Night.

Among his television work, Mr Vulich created many award-winning effects for shows such as Babylon 5, Buffy The Vampire Slayer (and Buffy spin-off series, Angel), while contributing his talent to over twenty episodes of The X-Files. Recent film credits include Being John Malkovich, The Texas Chainsaw Massacre 2, and Christopher Nolan’s The Prestige.