Runaway Train is so unashamedly 80’s, you can almost taste the testosterone they used to develop the film stock during production. As muscular and brainless an action film the era ever produced, it’s a film so manly-man driven by adrenaline and confounding hilarity (in a B-movie fun way, that is) you can help but find yourself grinning like an imbecile with just how silly it all is. Sure, there’s better “escaped convicts on the run” films out there, but this ain’t O Brother Where Art Thou by a long shot. This is your archetypal winterbound thriller, an electrified ticking-clock of thundering steel and iron blasting through the snowy Alaskan landscape with gritty, overacted characters and a potboiler plot delivering cheesy action and – and I can’t believe I’m saying this – a duo of Oscar nominated performances from Voight and co-star Eric Roberts. Yeah, Eric Roberts. 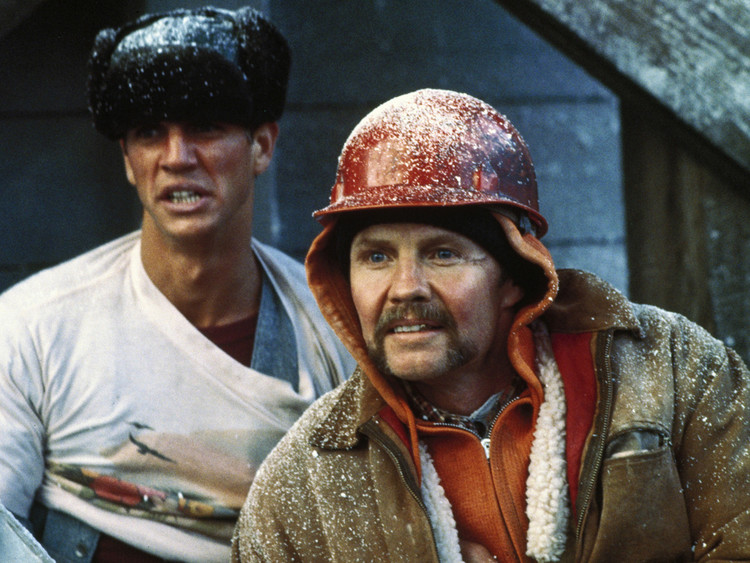 After being locked in solitary confinement for three years, hardened convict Oscar “Manny” Mannheim (Voight) breaks out of a deep Alaskan prison alongside chatty fellow inmate Buck McGeehy (Eric Roberts). Making it to a nearby railyard, Manny and Buck hop aboard a train, unknowing to the fact that at that precise moment, the driver has a heart attack, destroying the brakes and accelerating the train into an unstoppable run across the country. They’re tracked by the railway company’s central office, including engineer Frank Barstow (Kyle Heffner), associate Dave Prince (TK Carter), and company manager Eddie McDonald (Kenneth McMillan). As their plight becomes more dire, Manny and Buck realise they’re aboard the out-of-control monolith with an interloper – rail-worker Sara (Rebecca DeMornay) – and as they struggle to bring the train under control, it becomes apparent that their escape might be extremely short-lived.

As a survivalist thriller, Runaway Train works in buckets. Note for note, pound for pound, the film equals that of any other B-movie genre piece from the decade, in spite of overheated scripting and fatuously preposterous acting, Runaway Train simply reeks of electric-guitar-infused 80’s cliche, to the point it’s now more cheesy than electrifying. Based loosely on a story by, of all people, Akira Kurosawa, Runaway Train’s credited screenwriters have delivered a film that’s light on character depth and heavy on careening, pulse-pounding narrative wrangling. Neither Manny nor Buck are compelling characters – hell, they’re escaped convicts, immediately making the audience conflicted as to whether they should survive or not – while Rebecca DeMornay’s Sara isn’t in the film long enough to develop beyond tokenism and expositional redundancy. 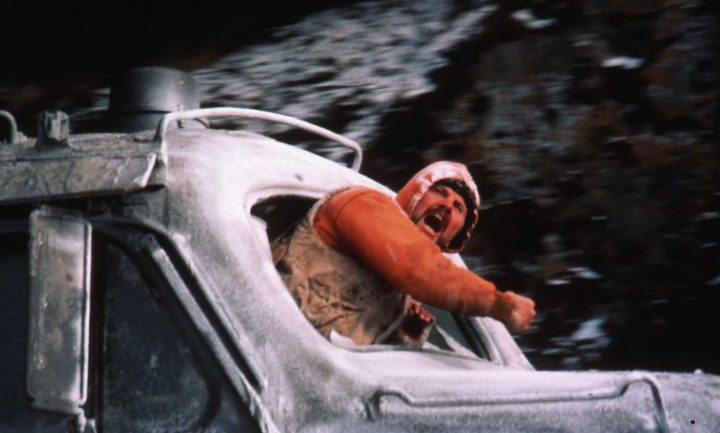 Given most of the film involves characters simply screaming at each other in fear, it’s surprising to find both Voight and Eric Roberts snagged Acting nominations at the Academy Awards for this: in the cold light of reflection they’re one-note performances that offer very little depth or emotional involvement, which is disappointing considering the talent involved. Kyle Heffner’s bludgeoning performance as Frank, and Kenneth McMillan’s handkerchief-sweating company man are pure 80’s cliche, modern Narcissus’s sure of their own technology forced to contemplate human carnage in the view of potential chemical catastrophe – the train is heading towards a chemical plant which, if damaged, could cause countless casualties. Their hilariously clunky performances counterbalance the inherent tension in the core plot device – the runaway train, four engines of iron barrelling through the arctic landscape, unstoppable – and provide unintentional chuckles. Then there’s sadistic prison warden Ranken (John P Ryan), whose pursuit of Manny feels a distant echo of Ahab and his Whale, and through whom the film’s finale jags from thunderous action to stygian reflection on human decency within the space of two minutes. It’s a thankless role, but Ryan gives it his best steely-eyed-glare shot.

As clunky as the plot is, and as contrived as the hurdles and near-miss sequences feel, Runaway Train is still thoroughly entertaining. Perhaps not in quite the serious tone originally envisioned, but surely through sheer energy and solid execution. This looks like a film shot as real as it possibly could – there’s very little matting or “green screen” of the actors aboard the train; the actors look like they’re actually on a speeding, out-of-control behemoth and this realism adds to the urgency of the plot. The film looks like it was shot inside a blizzard – nary a frame goes by where we’re not reminded of the cold and isolation of the scenario – parallel to Manny’s desperation and begrudging inhumanity, methinks, and after 90 minutes of snowy, windy, freezing cold visuals I have to admit to skin prickles every so often myself. 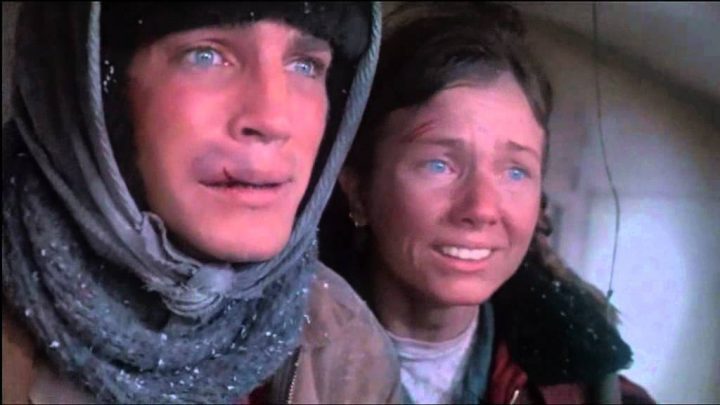 Runaway Train was helmed by Russian-born Andrei Konchalovski, who would go on to direct Tango & Cash a few years later, as well as 2003’s The Lion In Winter, which saw Glenn Close win a Golden Globe. Konchalovski’s use of ADR is jarringly obvious, perhaps due to the technical limitations of the time and also the location filming done for the bulk of the movie, but his editing (Henry Richardson, who cut the film, was nominated for an Oscar as well here) is sublime, and his framing, lighting, and refusal to glamorise the movie in any way is just brilliant. As I said at the top, this film looks, feels, and sounds exactly how I remember the 80’s.

Deliriously subversive and at times starkly melancholic, Runaway Train is a schlocky, exceptionally broad pulp action thriller that shows its age but still keeps entertaining. In spite of Jon Voight’s crazy-eyed portrayal of Manny, Eric Roberts’ shouty, weirdly-accented voyage as Buck, and DeMornay’s insufficient Sara, Runaway Train is both a terrifying journey into human madness against the odds and a hilariously overheated buddy movie (of sorts) that works in spite of its raggedy edges. A ripping plot overcomes limits within the film’s scripting, and remains an enduring Hollywood classic.

For more train carnage, check out our review of Tony Scott’s UNSTOPPABLE.