It’s fair to say that for every Stephen King story turned into a film that’s good, there’s a half-dozen that aren’t. While Shawshank Redemption, The Mist, Misery and The Green Mile remain definitive, there’s a swathe of drek with King’s name aboard that is, well, risible. The single question facing King fans who enter Cell’s clutches is whether or not it’s at the Stand by Me end of the spectrum, or if it’s more a Langolier. Truthfully, it’s a little somewhere in between; similarly to King’s most popular novel, The Stand, Cell tells of a great human apocalypse witness by a smattering of survivors who must band together to… well, survive it, only without the operatic verve of The Stand. 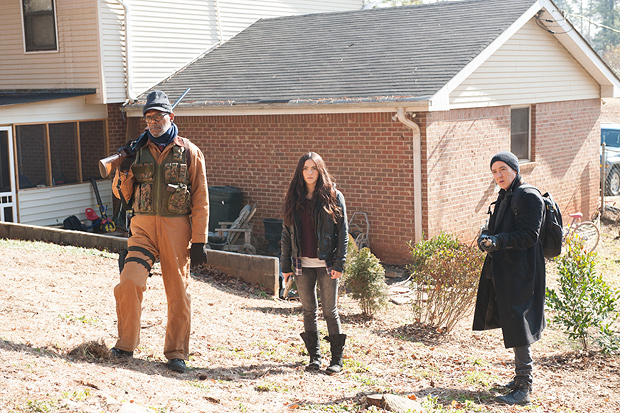 Cell stars John Cusack as typical King narrative Everyman Clay Riddell, an artist who’s just arrived at an airport when a mysterious signal, transmitted through the mobile phone network sends everyone listening to their devices into a murderous frenzy. Escaping imminent death, Riddell stumbles upon subway driver Tom McCourt (Samuel L Jackson), and together they escape to relative safety. However, Riddell needs to find out if his estranged wife and young son are safe, and sets about on a quest to locate them. Accompanied by McCourt, fellow survivor Alice (Isabelle Fuhrman), and local schoolboy Jordan (Owen Teague), Riddell makes his way north to find his family, slowly piecing together the puzzle of how everyone was affected by the strange signal from their phones. As they progress, it becomes apparent that everyone not effected is having similar dreams while asleep: dreams involving Riddell’s graphic-novel creation of a man in a red hoodie.

There’s moments of abject horror in Cell. Betwixt, there’s moments of low-grade human drama, the kind that’s enough to give Cell momentum into “compelling” without tipping into “great”. Fans of zombie horror, sci-fi and the End Of All Things movies will find much to enjoy about Cell’s simple style, directed with considerable workmanship by Tod Williams. If that sounds condescending, it ought not; Williams has fine films such as The Door Under The Floor, and crap like Paranormal Activity 2 on his resume, which isn’t exactly a convincing mixture, but a director unwilling to venture out of his wheelhouse isn’t a brave storyteller at all.

Conventional set-pieces of typical apocalyptic cliche do abound here, but rising above that is halfway decent characterisation that mitigates the prosaic manner in which King’s mystery unfolds. Kudos to Williams for mixing the spine-tingling chills of the plot’s mysterious arc with the brutal violence King often depicts in his writing, as well as the diversionary kooky characters he infuses within his stories. Cusack’s character, Riddell, is appropriately intellectual and cerebral, and as the violence and zombie-fication of the human race escalates, he is driven by an increasing desperation to find his son. It’s a bleak role for Cusack, although he manages to make Riddell somewhat empathetic even though I could swear he’s utterly crazy for throwing himself into harms way. Jackson, with whom Cusack appeared in another King story-slash-film, 1408, restrains his usual histrionic pitch for a more measured, accommodating performance as McCourt, a man with his own sad history who, perhaps through the film’s focus on Riddell, doesn’t quite get the depth I would have liked. For what is essentially played as a buddy movie, Jackson’s role is considerably reduced comparative to the rest of the cast. 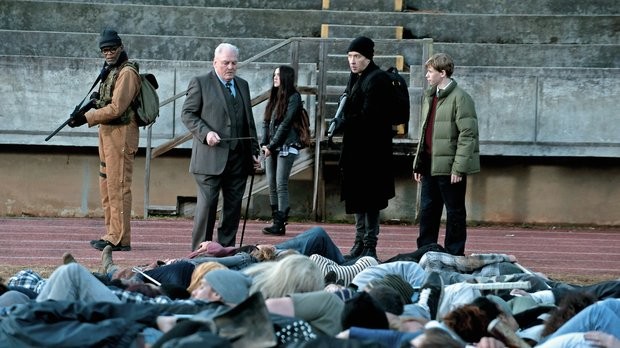 The supporting roster is mainly bulked by a roster of new talent (one caveat: the always wonderful Stacey Keach, who plays the headmaster of a school visited by Riddell and McCourt), including The Orphan star Isabelle Fuhrman, as Alice, whose role in the film is largely inconsequential other than to offer tangential conversations between people other than Riddell and McCourt. Owen Teague’s role as a young schoolboy is equally inconsequential, albeit offering up a plausible scientific explanation for what’s going on, and then there’s blink-and-miss-it roles to Alex ter Avest and Catherine Dyer, the latter of whom appears as a character I’d loosely describe as “flirty bar-cougar”.

Cell does very well with its reduced budget and minimises collateral damage from shoddy CG by cutting away quickly when explosions or significant “epic” stuff needs to occur. This doesn’t cheapen the film in any way, but rather give it a more imagination-driven sense of energy, because we’re filling in the blanks a lot ourselves. Sure, a lacrosse field full of sleeping, burning corpsicles looks a bit dodgy, and a few of the massive explosive moments within the film do have a degree of fakery about them (a plane crashing into the airport terminal is well done, though) but if you squint enough it’s barely noticeable. Also working well are the creepy makeup and prosthetic effects on the “zombie” characters in the film; gory without being specifically graphic, Cell does what it needs to to produce an emotion and then pulls back from pornographizing itself (yeah, I just made that word up – so what?). Somewhat problematically, though, the “attack” scenes involving the hordes of phoners (as they come to be called) are in that typical handy-cam, shaky-frame style which tends to ruin a lot of modern films, so be aware. 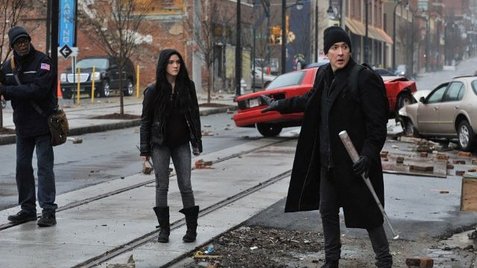 I’m loathe to spoil Cell’s mystery for those of you haven’t read the book (or seen this film), but I can’t vacate this review without first critiquing the worst aspect of the movie: the ending. Typically, these supernatural horror films involving “one man’s supernatural journey” end with some kind of downbeat, gut-punch conclusion reveal that brings either shock or outrage depending on its success. The Mist, for example, achieved what I consider to be the single-finest shock ending to any film ever, a literal cinematic sledgehammer to the temple of everyone who sees it. The Mist earned that downbeat gotcha moment through carefully building up the characters in the film to be people we want to see win, to escape, to emerge victorious. Cell, in trying to do something similar, doesn’t have enough firepower up it’s what-the-hell-is-going-on ending to make up for just how confusing and awful it really is. Not to mention, we never really get to know Riddell all that well, other than he’s a man desperate to find his son, which is as generic a character plot as they come. So the film’s twist ending (at least, I think it was a twist, because I’m still not sure what the hell was going on) undoes all the good work Williams (by way of King) do to build up the mystery and suspense.

Which isn’t really far from King’s oft-described fault, I suppose. The man can deliver a set-up and character arc like nobody’s business. Often, however, he can’t stick the landing. Too often, his endeavour to inflict suspense and surprise aren’t given the climax the audience deserves or expects. Cell suffers from a similar malady, a disappointing, disjointed, entirely WTF ending that will have most people scratching their heads in disbelief. I know I was.

Cell is a film of two distinct energies. On the one hand, it’s a semi-successful supernatural “Chase The Devil” film with an obligatory satanic central villain overriding the phones-drive-people-crazy umbrella plotting, while on the other it’s a weird, kinda-Walking Dead zombie flick that works as a cross-country chase/search movie. On a sliding scale of goodness, Cell begins with a bang, and soon dissolves into a generic, somewhat formulaic ensemble piece that stumbles and crawls when it has plenty of room to fly. And that ending – oh, the sense of what might have been had it been good. Oh, what a missed opportunity. In spite of its egregious flaws, Cell still entertained me for the time I was watching it, and if you’re a fan of either Cusack or Jackson I can recommend it based solely on their performances, but as a Stephen King-based film, it’s entirely mediocre.