The second of 2015’s “drone” films, behind Andrew Niccol’s Good Kill, this Helen Mirren-led feature captures the tension and precision of modern intelligence gathering and operational activity with all the nail-biting lustre Hollywood can produce. Chilling, hugely engaging (no pun intended) and boasting terrific performances from all involved, this tech-heavy thriller is enthralling viewing for not only the psychological toll this kind of warfare takes on those behind the screens, but the complex decisions that are made to take lives from afar. 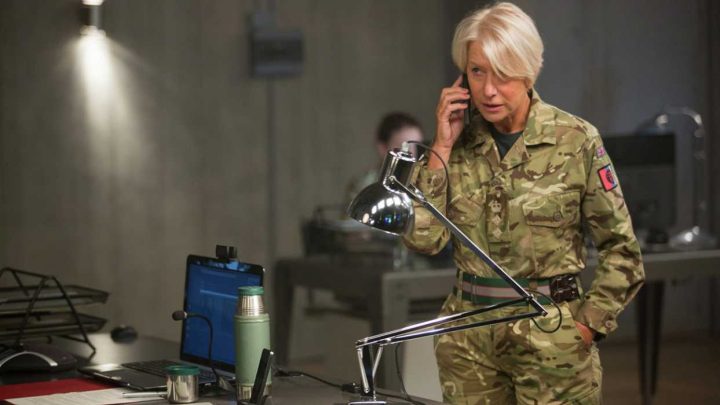 Mirren plays Colonel Katherine Powell, a British intelligence officer tasked with capturing several high value African militant targets, including two former British nationals, and a former American citizen. The mission is jointly run by British commanders, including Lieutenant Frank Marshall (Alan Rickman), government minister Brian Woodale (Jeremy Northam), and other members of the parliamentary cabinet. Aided by USAF drone operators Steve Watts (Breaking Bad’s Aaron Paul) and Carrie Gershon (Phoebe Fox), and local Nairobian intelligence operative Jama Farah (Academy Award nominee Barkhad Abdi – Captain Phillips), Powell directs the mission to strike a missile at the location where the targets are hiding when it becomes apparent that a suicide mission is about to develop. However, just when all seems set to go, a young local girl (Aisha Takow) innocently places herself directly in harms way – provoking the ultimate question of the needs of the many outweighing the needs of the one.

Director Gavin Hood, the man better known for giving us a voiceless Deadpool in the abysmal mess that was X-Men: Origins – Wolverine, was also responsible for the terrifying political thriller Rendition (if you haven’t seen it, check it out, because Reese Witherspoon is tremendous in it) and that film, alongside Eye In The Sky, do much to obfuscate the man’s missteps in projects choice (ahem, Ender’s Game, anyone?). The film isn’t the big-end action blockbuster the trailers might have sold it as, and for much of the film we’re just watching a bunch of (admittedly really good) actors watching the Google Map version of Nairobi’s Soweto-approximate, but Eye In The Sky offers much more than simplistic bomb-from-above thrills and bombastic Military-speak technobabble. Told from four perspectives – Powell’s operation base in the UK, Marshall’s office in Whitehall, the USAF base in America, and around a token slum in Kenya’s largest city – Eye In The Sky covertly begins to question the methodology and ethical implications of “taking out” targets with the possibility of innocent civilian casualties, and whether the ends justify the means. 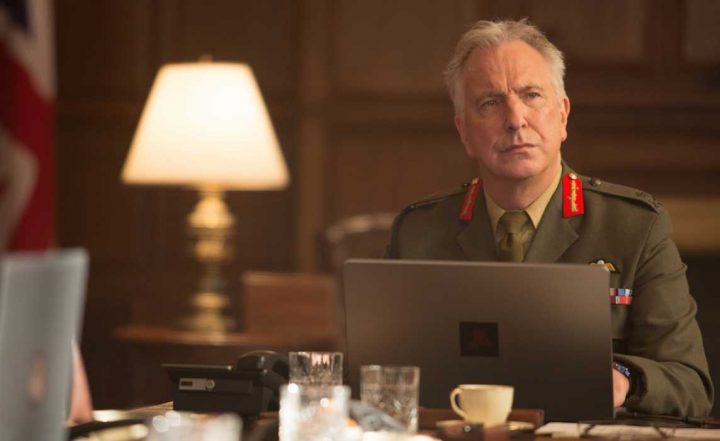 Guy Hibbert’s enthralling screenplays juxtaposes the legal and political wrangling involved in covert operations such as that depicted in this film, and the real-world consequences thereof including, but not limited to, the toll it takes on the chain of command who perform these tasks. As with any mission, authority is derived from one higher than oneself, with Colonel Powell seeking approval at almost every turn to go from a capture mission, to a kill mission, to eventually a collateral-damage-averse mission to take out people who might kill hundreds, at the expense of one innocent life. Much of the film’s plot involves people in charge getting the go-ahead to commit a possible act of illegal killing from the people above them in the chain of command (the film’s working title was “The Kill Chain”) and although one might think this would make for tedious, eye-rolling drama, Gavin Hood’s methodical direction and expert interweaving of the film’s quartet of plot-lines ensures at no time to we feel the film drag.

Rickman’s Frank Marshall, who spends the film sitting at a desk berating the political spectrum surrounding him – all of whom offer competing perspectives and willingness to grant approval in the face of the mission’s fallout – delivers one of his final performances with iron-willed strength and a sense of the macabre: Marshall is an old-stager at war, and knows that when the clock is ticking, decisions need to be made, regardless of consequences. Rickman offers yet another reason as to why the late actor will be so missed, with a commanding performance (particularly a brutal bow-out line at the very end) that might not define his career, but certainly put his supreme talent on the highest possible pedestal before he left us.

Mirren’s exasperated Powell feels decidedly ambiguous in motive – she’s not above taking out one child to accomplish her mission, although she seems hell-bent on finding justification even when there might not be any. Her behaviour towards the targets and her borderline creepy methods of worming the information out of her subordinates to do what needs to be done is given weight by Mirren’s performance, as close to an authoritarian figurehead in this film as we’re likely to get. Somewhat emasculating the men around her, Powell struts about her command post with an urgency and belief in her own motivations, even though getting the job done might take more than some are willing to give. 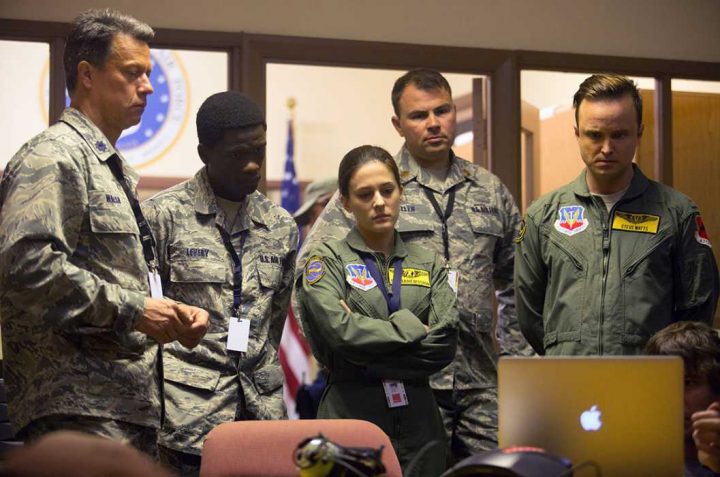 Aaron Paul is given the job of being basically the same character as Ethan Hawke in Good Kill – he’s the dude who pulls the trigger on the drone to fire its missile, and although we’re given virtually no backstory or depth to his character, we really feel Watts’ anguish at being ordered to fire upon an innocent girl. Paul is terrific with very little, the anger and incredulous rage inside him buried deep down but still bubbling away as he must overcome his personal issues with the command to carry out his job. Phoebe Fox, as his drone’s technical operator, is limited but still does a lot with what she has. Sharp-eyed viewers will also spot Gavin Hood himself as the USAF Commander under whose authority Watts resides.

Half a world away, in Nairobi, Barkhad Abdi gives a terrific performance as Jama, who has to get up-close-and-personal with the target area in order to provide the visual intelligence for Powell to make her decisions. Abdi’s role is largely designed to provide an “in” for us to see what’s happening on the other side of the drone ‘scope, and even though it’s a minor arc for the film Abdi is solid in it, delivering some moments of scintillating terror as he comes close to being found out by the militants. The girl at the center of the film’s final half, who literally decides to sell bread outside the house where the terrorists are prepping a suicide attack, is Aisha Takow, a young actress who spends a great deal of time on the screen but almost none of it doing anything other than providing an archetypal “picture of innocence” around which the ticking-clock premise revolves.

Finally, it would be remiss of me not to at least mentioned Iain Glen, the Game Of Thrones actor who appears here as British Foreign Secretary James Willet, spending the entire film suffering a bout of gastroenteritis and sitting about in a bathrobe looking into a laptop. Given the role is intended for Colin Firth at one point, I’m guessing in years to come Glen might feel a tad underrepresented by what is a humourless gag sequence. The smattering of sidebar actors around the main stars are all competent as well, including Monica Dolan, as the only other woman in the cast of any note, who provides a more maternal skew to the film’s hot-button topic of the cost of war.

Eye in The Sky is slick, well filmed, arguably insanely tense political thriller skirting the boundaries of war commentary disguised as propaganda. Tellingly for the film, the issues inherent to the scenario are discussed and dissected almost every way from Sunday, and yet no real resolution is offered other than that it’s simply the cost of modern day warfare. Boasting superb performances from Mirren, Rickman, Paul and Abdi, and directed with a pulsating, edge-of-the-seat vigour by Gavin Hood, Eye in The Sky is contemplatively prescient and riveting in its abject depiction of one of modern times’ most objectionable moral grey areas. Well worth a look.