I approached my first viewing of Ingmar Bergman’s classic film about religious ponderings with a sense of trepidation. Not because I’m not a fan of Swedish biblical exploratory cinema (if that’s even a genre, I’m not sure) but because highbrow art-house cinema usually goes right over my head. I struggle with subtext, pure and simple. And The Seventh Seal is entirely subtext. With a plot straining to cohese throughout, linked only by Bergman’s admittedly stunning camerawork and direction, The Seventh Seal’s appeal as one of those “greatest films ever made” incumbents seemed to me to be a little overblown (much the same way some people think Citizen Kane ain’t all that), and I left my viewing of the movie was far more questions and confusion as I began it. Instead of a straight-up narrative story, The Seventh Seal is more a series of vignettes and religious motifs brought to life, negating emotional investment and replacing it with intellectual pontification.

The film is a stark appropriation of imagery and iconography from the Book Of Revelation – the title explicitly refers to that – and although framed through a weird, anachronistic medieval setting, sets about with its infatuation with death from the very outset. A knight (Max Von Sydow) lies on the beach, in a world riddled with the Black Plague, and sees Death (Bengt Ekerot) come to take him; in order to stave off his end, the knight makes a deal with Death over a game of chess – if the knight wins, he gets to live, and if he loses…well, he doesn’t. As the knight and his squire (Gunnar Bjornstrand) travel across the country, they meet a troupe of actors (Nils Poppe, Bibi Andersson and Erik Strandmark) who have difficulties of their own. One of them has visions of the Virgin Mary and Jesus, but his wife is disbelieving.

I would be lying if I told you I didn’t struggle with this film. It’s an incredibly film for me to adequately describe, in the sense that it’s easy to appreciate as either a story or a visual statement. I found Bergman’s film is almost impenetrable, a confusing mash of period fantasy and not-so-subtle questions about faith and religion, delivered with the skill of a master artiste lacking the audience to appreciate his work. Even as open-minded to all forms of cinema as I am (yeah, even that shit Eli Roth wants to inflict on us) I did struggle with this one. I tried to understand what was going on, I really wanted to have my mind blown by some delightful piece of screenwriting or acting or something to stimulate me, but all I felt was… disillusionment. Make no mistake, I’m no dummy, and I really wanted to appreciate this film like so many of my critic idols do, but for much of the film I felt a little like a third-grader trying to understand theoretical physics. 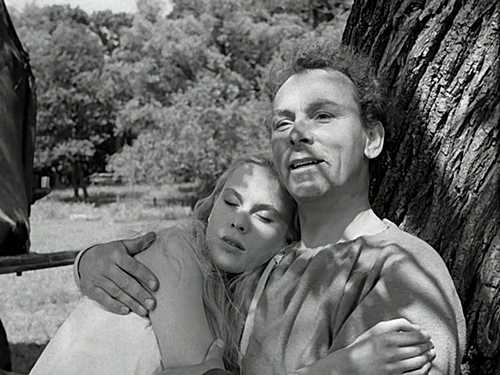 Juxtaposing the Swedishness of it all with a distinctly European melancholy is an interesting visual aesthetic, I’ll grant it that. Von Sydow’s haggard knight looks hewn rather than born, his Roman haircut bringing his features to the forefront of any close-up – specifically, his piercing eyes – and there’s a sense of jarring disorientation in hearing him speak in his native dialect instead of English like I’m used to, but he’s lost within this pile of verbose, confusing, obscure referential story points. Bibi Andersson is smoking hot as the wife of Nils Poppe’s Jof, while Bengt Ekerot is menacingly creepy as the personification of Death – although, looking closely, there’s no way that Ian McKellan comes close to resembling him like he was supposed to in The Last Action Hero.

On first blush, The Seventh Seal is a tremendously visual film; beautifully shot in crisp black and white photography, the film has a vibrant Arctic feel to it that cannot be dulled. The cast are incredibly Aryan to the point I half expected ABBA to prance across the screen in the background, with the women almost impossibly beautiful (even a supposed witch strung up on a courtyard early in the film looks like a Versace model) and the men suitably masculine even in tights and strumming mandolins. As with much cinema of the era, the gruesomeness and hideousness of medieval tines is… er, whitewashed a little to scrub the gore away, but Bergman doesn’t seem to shy from cruelty or barbarity as I expected. Instead, the film depicts true hardship when required (yay!) and as bleak an outlook as the film has, in many ways it’s strangely beautiful. The cinematography is credited to Gunnar Fischer, who gives the location-shot footage a deep-focus sharpness, while the interiors are often filled with shadow and menace; The Seventh Seal is a beautiful film visually, even through it stumped me intellectually.

I’m not entirely sure what to make of The Seventh Seal. If expectation is trumped by intellectual confusion in spite of visual splendour, does this make the film one to recommend in site of my inability to understand it? Maybe it’s too Swedish for me to appreciate? I don’t know: it’s a film that deserves further inspection and understanding, and I’ll ensure I do some reading up on it to further my appreciation for what Bergman was trying to accomplish. After all, the thousands of film fans who’ve seen it and appreciated it can’t all be wrong, can they? Therefore, my provisional rating for The Seventh Seal is: