Eddie The Eagle is exactly the kind of film you expect it to be, almost right from the outset. It plays its hand early – as a period biopic about an underdog amateur who dreams of being an Olympic athlete, Eddie The Eagle has a huge Cool Runnings vibe about it that it simply cannot shake. Unless it isn’t trying to shake it; perhaps it’s revelling in its formulaic story and hokey characterisations, and in most reviews I’d probably eviscerate the film-makers for not trying to elevate the material. But Eddie The Eagle is a simple story, a genuine underdog story, and it plays with the boisterousness of a very hop-a-long soundtrack and cheer-worthy moments of elation, without the significant angst or sense of jeopardy to accommodate the central character’s journey. 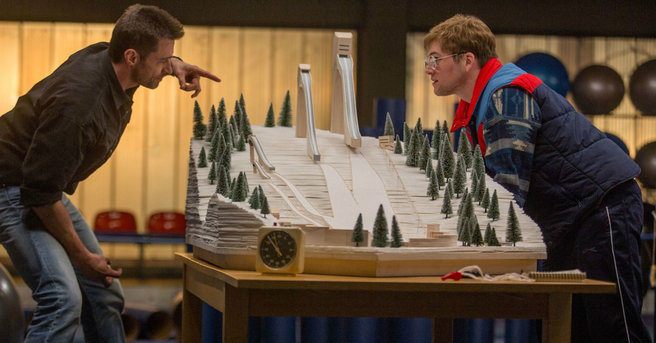 Taron Egerton plays Eddie Edwards, a young man who has dreamed his entire life about becoming an Olympic athlete. With his disapproving father (Keith Allen) wanting him to give up his dreams and join him in the plastering trade, Eddie summons the courage to become a Winter Olympic athlete in the dangerous sport of ski jumping, following failure at almost every other sport he tries. Eddie meets former jumper, now snow-plough driver Bronson Peary (Hugh Jackman, playing the role in full Wolverine style), who offers to teach him just enough so he doesn’t kill himself in competition. To the derision of fellow ski jumpers of varying nations, and to the horror of the British Olympic Team Selection Committee (led by a fabulously odious Tim McInnerny), Eddie manages to qualify for the Winter Olympics in Calgary, Canada, where he becomes a minor celebrity, and has to overcome his personal demons to live his dream and become an Olympic hero.

Based on the true story of the real Eddie Edwards, Eddie The Eagle is a film skirting the edges of blandness and rising occasionally into the realms of very good. Directed with perfunctory style by Dexter Fletcher, who makes the ski jumping sequences truly breathtaking amid a backdrop of insufficient dramatic urgency, the film does just enough to pass the time and entertain, without being particularly memorable. Kingsman star Egerton, as Eddie, is workmanlike in a role without depth, striving to give Eddie some kind of motivation or hook on which to generate empathy in his plight, but lacking a crucial ingredient to do so – good writing. That’s not to say he doesn’t do well, because he does, even if he sports a wilfully awful facial tic the entire film (the real Eddie Edwards has a distinctive visage, but Egerton’s attempt to mimic it comes off as… well… some kind of deformity); it’s the kind of performance that borders on parody, and were it not for Fletcher’s rose-tinted direction for the character, one might suspect this of being an outright comedy.

The film is obviously one that considers its subject sacrosanct. In this way, the film never really gives Eddie any genuine challenge other than that derived from the British committee working against him. Eddie himself is never personally challenged by much at all, blithely going about dreaming his dream and never really feeling the weight of burdensome angst those around him endure. Eddie’s father, Terry, is played by a terrific Keith Allen, the kind of father who brooks no silliness and thinks the blue-collar life is all his family is cut out for – fair enough, I guess, but while Allen sells the role with conviction, Egerton isn’t asked to complement that in any way. Allen’s chief sparring partner is actually his on-screen wife, played by a wonderful Jo Hartley, who really bears the lion’s share of the film’s emotive content as she overtly supports her son in his frankly ludicrous endeavours. 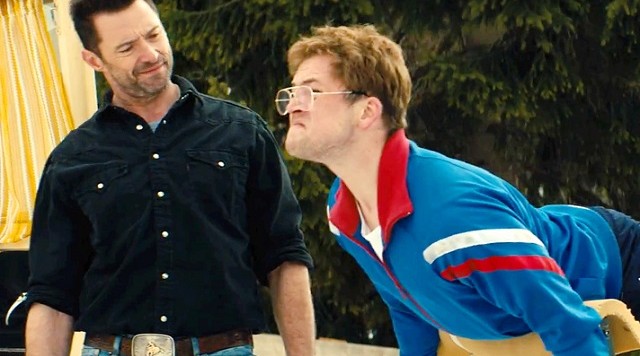 Even Hugh Jackman, playing the fictional Peary, feels limited to what he can do opposite the dream-a-little-dream joy of Eddie’s pursuit of conquering the ski slopes of Calgary. Jackman’s performance also borders of parody: a cigarette chewing, overly masculine rendition of the hard-bitten, bitter former champ who “threw it all away because of blah blah blah”, which is where the film’s most pointless backstory comes in. Christopher Walken’s cameo performance as Warrne Sharpe, a former ski jump instructor (who trained Peary, and subsequently had a falling out with his former protege) who wanders into frame with the narrative requirement of thin air. Exactly what this subplot does for Eddie’s personal story is something I’m still wondering, because Walken is associated with Peary, not Eddie – is this Eddie’s story, or a fictional character’s? Huh.

In the end, though, it’s all about Eddie’s triumph against adversity as he jumps for his country at the Winter Olympics. Affably genteel, arguably languid, and assuredly loving to a fault, Eddie The Eagle won’t find itself in many year-end best film lists but neither should it be overlooked as simple entertainment that demands little of the viewer other than simply the effort in watching it. Egerton is good, Jackman is laughable, Walken is negligible and the cheesy, soft-focused look back at a moment in history is like easy-listening music for the screen. In and of itself, it’s not problematic, and although it might read like I’m tearing this film apart, I did enjoy it. Forgettable, soufflé-fare that won’t linger long, Eddie The Eagle is middle-ground stuff that delivers minor laughs and some scrounging performances.