As an effective psychological thriller, Hush works wonders with its small budget and cat-and-mouse narrative. Sure, it’s hardly a revelation in terms of the number of genre cliches it throws at the viewer, but director Mike Flanagan (Oculus) manages to give the film a solid B-movie sense of gravitas, led mainly through  the performance of Flanagan’s real-life wife, Kate Siegel – who looks incredibly like a sister of Famke Janssen – in the lead role of Maddie, a deaf writer living an isolated life in the woods who is tormented by a psychopathic killer stalking her. Flavours of Panic Room, The Strangers and even The Purge abound in this film, as Flanagan wrings every ounce of tension and low-rent horror from Maddie’s predicament; given the character’s inherent disability (her hearing), it immediately informs on us an opinion on her ability to put up a fight, but her resourcefulness and “basic common sense” actions (unlike many a horror heroine before her) mark her as a compelling, altogether different protagonist. 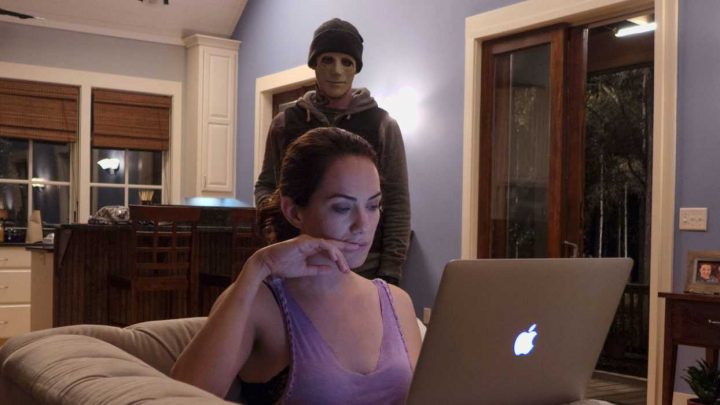 Single-setting horror films tend not to deviate much by way of creative inspiration. Typically, in a fight-or-flight film such as this, a character trapped by an evil force will initially seek to bargain for their freedom, then assert their knowledge of their habitat, encounter limitations preventing their escape, and inevitably undergo some physical or emotional torture in order to overcome their adversary and see out the closing credits. In this case Hush plays pretty much by the rules, joining the obvious dots and offering recognition to tropes of the genre itself – wifi and cell service chief among them – but with its razor-wire sense of no-nonsense vignettes and claustrophobic tension, there’s enough to make the film feel at least thrilling even though you can kinda see where things will end up.

Key to a good horror is a decent villain, and John Gallagher Jr’s unnamed psychopath is right up there. Instead of being some all-powerful supernaturally enhanced uber-killer, Gallagher’s Man (he’s credited as such) is basically some redneck dude out for vicarious thrills hunting and playing mind-games with Maddie as she tries to stay alive. He’s not blessed with some overriding agenda beyond making Maddie’s life a living hell – he cannot be reasoned with, bargained with or otherwise “talked out of” killing her, making him an antagonist you simply have to kill or escape outright from. Gallagher Jr does a solid job of giving the Man a sense of vindictive assholery without coming off as a Scream-esque caricature, his weapon of choice a crossbow and his main agenda to simply continue marking notches on the weapon’s stock.

Bit parts to Michael Trucco and Samatha Sloyan (currently a regular on Grey’s Anatomy) as neighbours of Maddie’s give the Man’s brutality added weight when it comes to the film’s final act, a bloody showdown between the two leading performers. Kate Seigel’s performance anchors the film as a solid leading lady, although aside from her obvious physical disability isn’t entirely bereft from her intellect, which is all she can use to defend herself. Seigel works her way through the gamut of Sudden Heroine emotions, ranging from abject fear to possibly-out-of-her-depth resolve, hardly a revelatory arc for a thriller but still commendable in line with the film’s independent tone and low key, but deftly handled set-pieces.

Hush won’t make many year-end Top Ten lists for great horror films, but that doesn’t mean it’s by any means a poor showing. At times bloody (Maddie’s poor dang hand cops a beating) and gory without being overly graphic, Hush’s slow-pulse war of attrition is amplified by Flanagan’s direction and The Newton Brothers pulsing electronic score, as it thunders to its gritted-teeth conclusion. Rather than deliver a histrionic genre entry Flanagan’s visceral use of sound and lighting provides ambiance to an otherwise tightly-wound B-flick that delivers, and that’s all anyone really ever asks for.