My viewing of Sunrise came following a Twitter conversation regarding silent cinema and its enduring legacy on modern Hollywood, and thanks to this recommendation, I can now unveil the full scope of my awe and surprise at just how good this film truly is. Released in 1927, Sunrise: A Song Of Two Humans is an incredibly visual film from acclaimed German director FW Murnau (best know to audiences as the man behind the world’s original vampiric hit, Nosferatu) following an invitation by Fox Studios to travel to America to make a film in his own inimitable style. Laced with Murnau’s incredible eye for detail and iconography, coupled with amazing in-camera effects and superb cinematography, and featuring a can-do list of Hollywood’s favourite visual-shorthand tricks of the trade, Sunrise is not only one of the greatest silent films I’ve seen to-date, it’s also one of the greatest films I’ve seen to-date. Without exception, everything about Sunrise screams perfection; well, except for the story, which is perhaps the most by-the-numbers dramatic thing about what is a superlative movie.

At the 1st Academy Awards, Sunrise won the Oscar for Unique & Artistic Picture, considered to be equal to that of the winner for Outstanding Picture, Wings (also released in 1927). Retrospectively, the Academy has since considered Wings to be the “Best Picture” of 1927, removing the Unique & Artistic category the following year. According to the internet, the original print of Sunrise was lost in the infamous Fox film vault fire of 1937, the current HD version is taken from a second generation negative following the accident. It is from this version our review is derived. 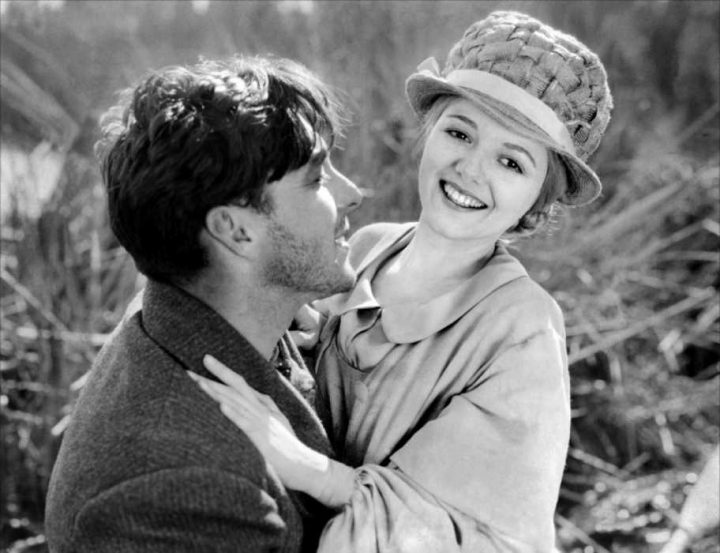 Sunrise is, ironically, the very antithesis of a light-hearted film. You’d think with a title like that it’d be a frothy, calming film about love or life or romance or something… but it isn’t. Instead, Murnau works incredibly dark here, with a husband (George O’Brien) planning to murder his wife (Janet Gaynor) so he can be with a sketchy, precipitously “modern” woman from the city (Margaret Livingston); inside the opening ten minutes, the husband has ditched his wife at home with their infant child so he can canoodle with the city woman in the reeds by the river. It’s a sequence played not for laughs but almost as a horror film, even a dark thriller, and it’s as effective as hell. The Man’s desire for the City Woman is so great he agrees to murder his own wife by drowning her in a “boating accident” – the tension precipitating the fateful deed is as good as anything modern film-making can throw up, drawn largely by the performances of the cast and the accompanying score – a ferocious, appreciably dirge-like thing that encapsulates the shadowy nature of the Man’s inner thoughts. 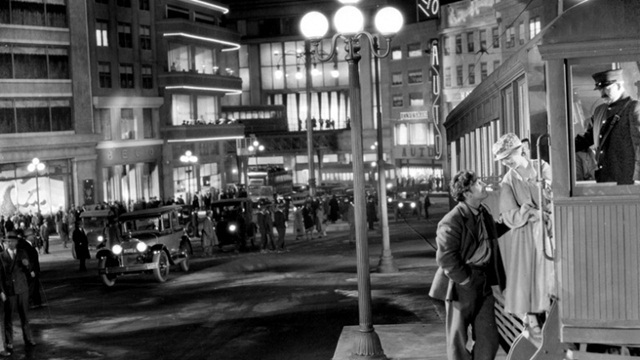 Setting aside the story for a moment, Sunrise works just as well as an eye-candy cornucopia of visual flair and sublime perspective. In what I picked as a precursor to Peter Jackson’s use of “forced perspective” in his Lord Of The Rings trilogy, Murnau’s use of foreground and mid-ground information to accentuate the telling of his story is just amazing to see, the shifting radiance of the rural scene and the metropolitan cityscape as both the Man and his Wife venture into the hurly-burly of the city allows Murnau’s camera to deliver some of the most astonishing narrative imagery I’ve ever seen. Ever. The gigantic landscapes and interior sets feel like vaults of empty space filled with tiny people in them (I’ve tried to use the best examples in this review), the slow draining of emotion over the course of the film relegating the characters to the bottom third of the frame (referenced by the “rule of thirds” in standard camerawork technique) as a way of solidifying their inherent minimalisation. Not only does Murnau work with perspective to capture the darker side of human nature, he also abounds in experimenting with the normality of cinema as an art-form to that point, pushing the boundaries of what people (myself included) might expect from a technology still in its relative infancy. 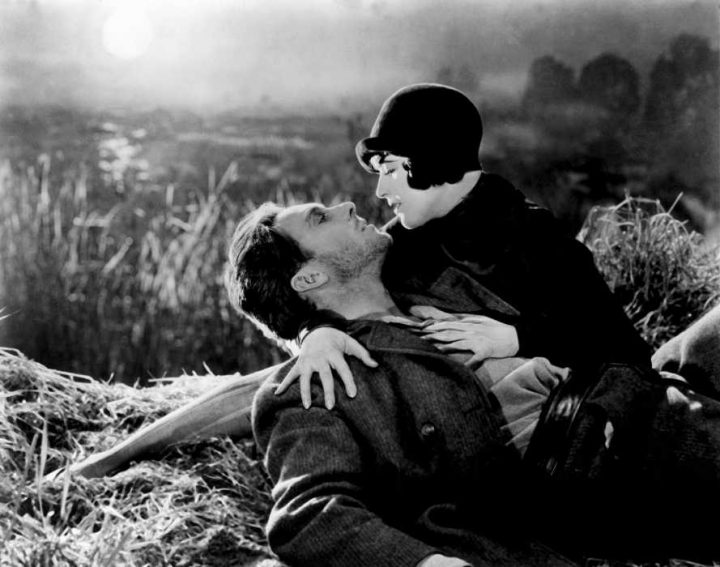 There are shots in Sunrise that, to my eyes, are just jaw-dropping for their how-in-the-f@ck-did-they-pull-that-off-ery, and some that just sparkle with Murnau’s clinically potent approach to the subject matter. I’m not a great one for subtext and side-eye narratives, but Sunrise has so many themes and supercharged ideologies within it that it begs for multiple viewings. The question of fidelity, marriage, of lust and envy, of the rigidity of social acceptances and of the restrictions of men (humanity) in their emotional entanglements is all wrung from the simple storyline, wrapped within Murnau’s scathing indictment on infidelity. Alternating between angrily vituperous, to laconic and virtuous, to incredibly tragic – and man, that wonderful ending – oh wow, Sunrise runs the gamut of emotional conniption for the sake of its admittedly threadbare plotting. 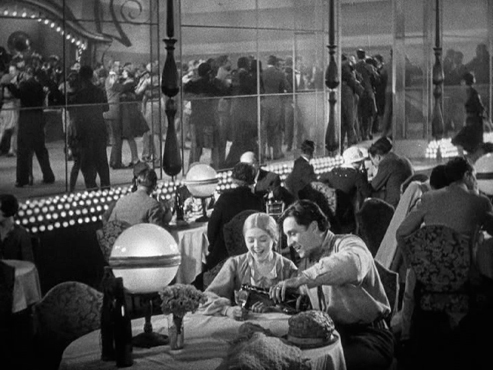 There’s a shot midway through Sunrise that, considering the film’s vintage, is just mesmerising for how well it’s achieved. The Man and Wife, reunited following his mea culpa in a cathedral during somebody else’s wedding, walk through the city streets, oblivious to the cars and hustle around them, before their surroundings transition to the rural landscape they’ve lived in until now. Just when you think it’s a traditional rear-projection effect (akin to our green-screen technology today), you suddenly realise that some of the cars they’re narrowly missing are actually passing between the actors and the camera, a shockingly cool effect that I had to re-watch numerous times to make sure I was seeing what I thought I was seeing. I’m not entirely sure how this effect was achieved, but it literally stopped me in my tracks. So there’s that. Consider Murnau’s use of fades and double-exposed sequences where different imagery is laid atop others, his brilliant use of lighting during night sequences (especially early in the film, and during the film’s climactic boating sequence) to depict not only the actual night, but the darkness of the Man’s emotional state, or even his terrific use of focus and depth of field to accentuate the contrast between the “farmers” and the “City folk”, a statement on class from which we can draw much about Murnau. There’s always something happening in a Murnau shot, be it the foreground or back, and it’s the kind of film you’d spend hours just watching the periphery to capture the delirious joy of it all.

Sunrise, whether you buy into its murderously dark characters and storyline, is a technical marvel and a legit tour-de-force of visual accomplishment. 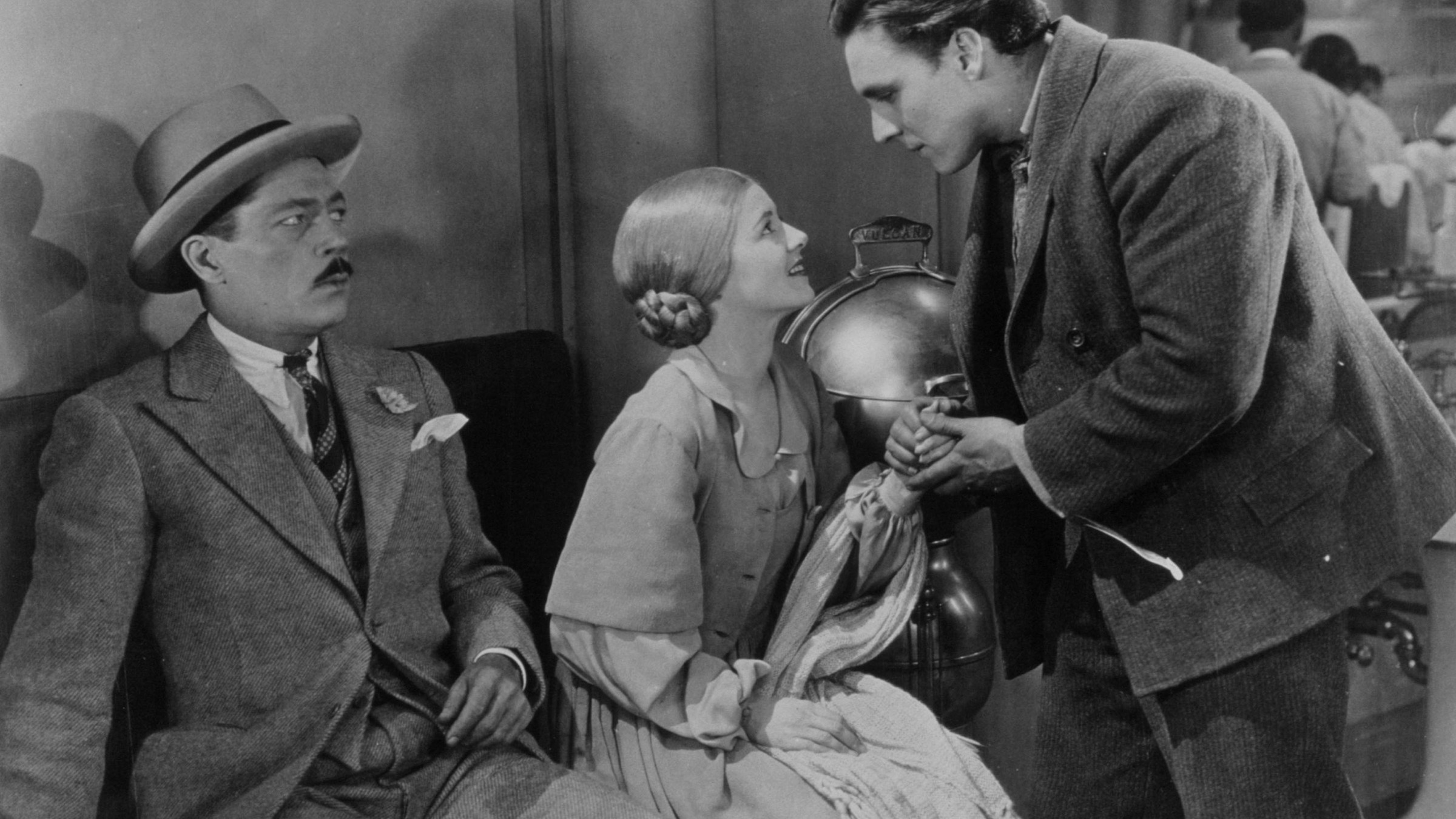 Not only is Sunrise endlessly inventive visually, it also features the earliest use of the “sound on film” technology (a precursor to talkies, in a way), in that both music and a sound-effect track were layered onto the film stock, providing synchronised music and numerous effects such as train toots, crowd noises, whistles etc (a scene involving piglets has the tiny animals “squeak” but not “oink”, which is cute and all but hardly accurate), but still no distinct human voices to speak of. Sunrise must have astonished audiences of the day, almost as much as it astonished me today, accomplishing wordlessly what many films struggle with even using the latest cinematic advances. Wordlessly, the actors perform their roles admirably; Janet Gaynor, as the somewhat cuckolded wife, and who looks suspiciously like Game of Thrones actress Maisie Williams, is hardly ravishing in the true sense of the word, but has a homely, wholesome and devout look about her. She’s appealing, though, and her smile lights up the screen. Poor George O’Brien, as the husband, is rugged and charming but his motivations for being such a douche early in the film are kinda overlooked way too easily for my liking, making any feelings of remorse for him hard to bear – but he earns the film’s ending like you would not believe. Staggering performance. And Margaret Livingstone’s slatternly cougar role is relatively short-lived, even though she makes it count whenever she’s on the screen. Smoking hard, the City Woman is the perfect foil for Gaynor’s rurally inclined safe-harbor role, and it’s probably the most memorable role in a film filled with so much to enjoy. 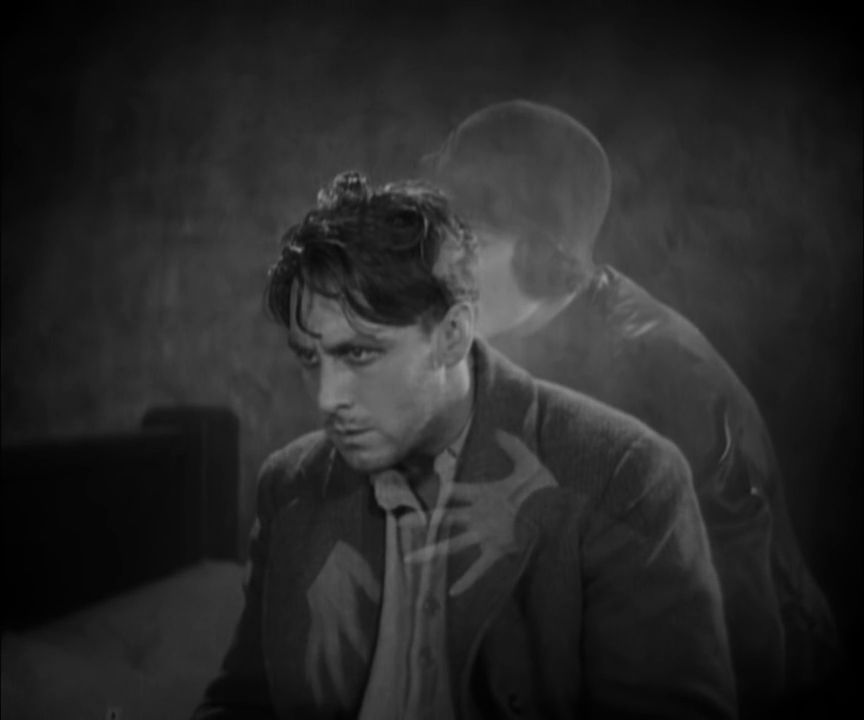 Sunrise: A Song Of Two Humans might be encumbered with a silly title, but as a film is a visual, sonic and narrative-arc triumph. While the characters within the film may encompass the archetypal literary convulsions of hubris, love, rage and human emotion and feel a tad underdeveloped, it’s the way Murnau uses them in the film that works so well. Tinged with nice humour, but undeniably working from a chasm of darkness, Murnau’s tableau is a masterclass of framing, editing, lighting, angles, perspective, and timing. If you’ve yet to appreciate silent film as an artform, or find it a difficult genre to get into, may I humbly suggest Sunrise as a starting point. It elicits some chuckles, has plenty to offer the visual cineast, and cannot be overstated for its impact in modern cinema even now. Superbly made, Sunrise is one of the best silent films I’ve ever seen (as if that recommendation means anything) and quite simply one of the best films ever made. Period.

If you’d like to watch Sunrise, you can do so below! It’s in the public domain on YouTube in glorious HD!