Sitting down to watch High Fidelity recently I came to the conclusion that it’s exactly the kind of film that changes perspective alongside the viewer watching it. I remember thinking back when I saw it in cinemas during Y2K that John Cusack’s character, the downtrodden and emotional recidivist Rob Gordon, was the lone-wolf character trying to make sense of the women he’d encountered through his life, and that it kind-of approximated my own relationship journey to that point. I admired Rob in a way, empathised with his continued confusion and sense of helplessness with women. Now, though? My wife and I both thought Rob Gordon was pretty much a giant dick for most of the film, meaning either my reminiscence of the film is warped or I’ve grown as a person enough to recognise the kinds of misogyny and self-absorption I’d grown out of since the year High Fidelity was released. 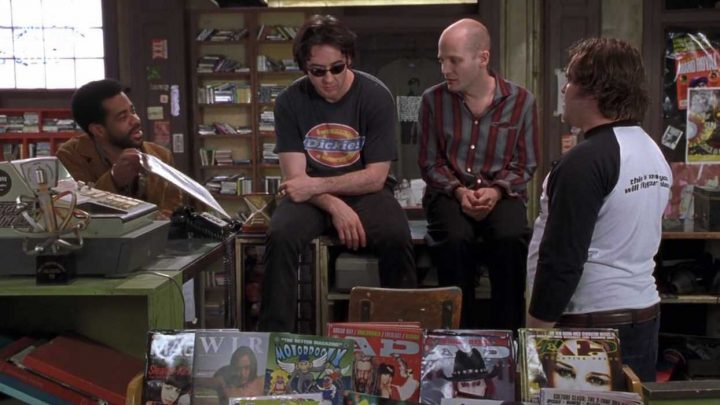 Rob Gordon is the owner of run-down Chicago LP record store Championship Vinyl, where he spends his days putting together “top five” lists about his favourite albums and singles with employees Barry (Jack Black) and Dick (Todd Luiso). His relationship with beautiful Laura (Iben Hjejle) has just ended badly, and as he tries to come to terms with this turn of events, and reconcile that relationship with those of his past, he decides to revisit the wreckage of his glorious past breakups to understand why he continues to fail with women. Among those past conquests are the emotionally insecure Sarah (Lili Taylor), the uptight and frigid Penny (Joelle Carter) and the beautiful, unattainably princessy Charlie (Catherine Zeta-Jones). Laura, in the meantime, has shacked up with Rob’s upstairs neighbour, the zen-loving, probably-vegan, entirely-annoying Ian (Tim Robbins), and has confided all of Rob’s flaws in his sister Liz (John Cusack’s real-life sister, actress Joan Cusack), much to her disgust.

I have to confess to never having read Nick Hornby’s novel on which this film is based, even though it remains an albatross around my neck of “things I wish I could do before I die”. Although Hornby’s book is set in England and features a central character by a different name, the author gave the film his tick of approval largely because it captured the tone and timbre of his book in spite of the creative differences. Rob Gordon’s underlying nature, in that he’s not maliciously unwilling to commit to a relationship moreso than he is simply scared of what commitment actually mean is central to the film’s plot, something you’d think he’d have figured out by the time High Fidelity kicks off, and also something he’d have worked out considering the majority of music he listens to deals with exactly this kind of thing. 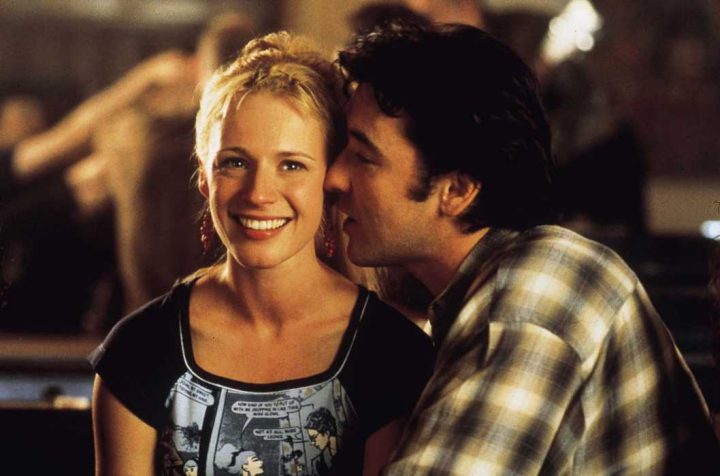 Relationship wrangling is a difficult thing to achieve with realism in film – too often, films drift into melodrama or the romantic-comedy tropes of convenience and contrivance, while a comedic film such as this can often come across as un-serious or muddled in its point: suffice to say, director Stephen Frears and his writers, DV DiVincentis, Steve Pink (Gone In 60 Seconds, Con Air) and Scott Rosenberg (director of Hot Tub Time Machine) have crafted a film that straddles both the dramatic weight of Rob and Laura’s problematic relationship, and the sparkling “musical snobbery” of Rob and his record-store posse’s elitist behaviour to those who wander through the door. In finding the humour in Rob’s humanity, even if he acts like a total douche almost through the whole film – he meets up with Laura at one point and comes away with the sense that they could get back together, and then goes straight out and sleeps with a local singer, played by former Cosby Show star Lisa Bonet – we come to realise that life is a messy, complex series of events that have little pattern, a chaotic confluence of hormones, music, tears and more music. At least, that’s the way Rob Gordon approaches it.

High Fidelity would easily slide into my “top five” films about music: although not really a musical film in the sense the plot revolves around it (like Almost Famous, for comparison), there’s a passion for music threaded throughout the film’s dime-store philosophising that hums along in the background even when things get “serious” in the latter third. The conversations between Rob, Dick and Barry are both exceptionally funny and snobbishly elitist, to the point one of Rob’s friends even calls them out on it, but at the heart of their banter and constant arguing is a sense of mutual loyalty. Not to each other, but to the music. Rob’s leather-jacket wearing, five day growth kinda feel is as worn down as the store in which he tries to disappear from the world in a way, a knockabout business with no real prospects until a duo of skateboarding punks come along and demonstrate decent musical acuity. The journey of Rob from cliffhanging man-child to emotionally flexible adult is the core of High Fidelity’s mantra, alongside some wonderful vignettes and character work (the cameos by Lili Taylor, Tim Robbins, Bruce Springsteen and Joan Cusack are just wonderful, and add a dash of panache to the film) and it’s to Frears’ credit that he makes it all work so wonderfully well.

That’s not to say the film doesn’t have some problems. Firstly, it would be remiss of me to suggest that Laura, played by Danish actress and model Iben Hjejle (go on, see if you can figure out how to pronounce it… I’ll wait.) wasn’t a key problem for me, because as an actress she makes a better model. Hjejle is beautiful, I’ll give her that (that smile… My god, the stars) but alongside an actor of nuance and timing like John Cusack, she’s out of her depth. Not to mention wooden, grinding the gears of her dialogue at times so badly it’s cringe-worthy. But hey, she’s nice to look at and isn’t awful by the longest margins, just comparatively weaker than those acting around her. 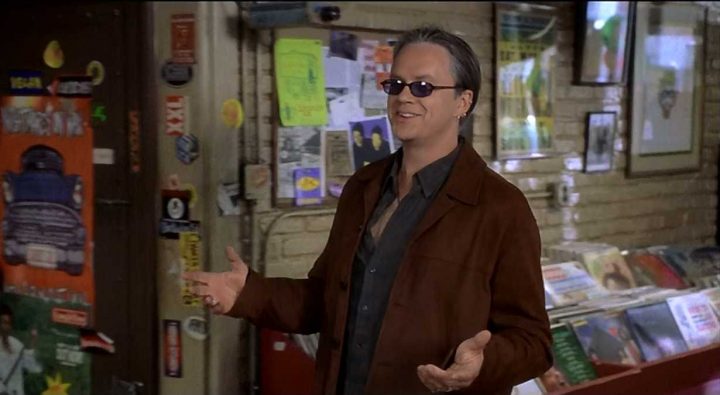 Secondly (and this isn’t so much a problem as it is an observation), the film cannot restrain Jack Black, in the role of Barry, no matter how it tries. Easily my favourite of all Black’s performances to-date, his Barry is an obnoxious, irrepressibly insulting, and entirely lovable. Barry isn’t the kind of guy you’d ever like to meet in real life (the way he berates store customers is jaw-dropping in audacity and fingernail-chewing in hilarity), but on screen Black nails the goofy, grindr aspect of Barry’s nature, and shows off his skills with a dynamite vocal performance to round out the film; this moment surprised is held back as a legitimate surprise for the audience and the cast, and you can feel the rug being tugged from beneath your feet as it plays out. Barry’s chemistry with Rob and Dick is wonderful, the kind of thing I could imagine a sitcom being made out of and a very Sienfeld-y “show about nothing but music talk” flavour about it all. Luiso’s Dick, a reserved, almost painfully shy and utterly boring character who appears to have fallen into something akin to idol-worship of Rob, takes a while to warm up, but Luiso’s performance is indelible to the film’s overall chummy aesthetic.

Part of the film’s charm is Cusack’s constant stream-of-conciousness discussions to camera, breaking the fourth wall more than any film before or since (to my knowledge). It’s a film technique that works its best when the on-screen talent is capable enough (Matthew Broderick’s work in Ferris Bueller perhaps being the prime example) or the writing is excellent, and here Cusack is working with both. He’s disarming, infuriating, arrogant, hopelessly romantic and decidedly egomaniacal; basically, he’s a man, and the comfort in watching him jabber away at his innermost feelings is drawn out of the screenplay’s absolute faith in the material, and Cusack’s ability to deliver it. And he does, really well.

Revisiting High Fidelity again is like flicking the light switch on in a room you haven’t been in in a while. You remember it, but it feels different somehow; the film speaks to me on a different emotional level now than it ever did, which echoes the growth I’ve had as a person rather than anything different about the film. High Fidelity’s themes are universal in their urban grittiness, and its wit and ability to transition seamlessly between laughs and tears is a testament to Frears’ skill as a director to hone the actors to deliver what’s needed. Although ropey at times with some tangential subplots (the Laura/Ian running gag thing does feel like it goes on too long at times, although it does generate one of the film’s biggest laughs) High Fidelity is a well made, generally well acted humanist drama-comedy subverting emotional constipation with a sublime musical soundtrack and deft, kooky humour.