Director :   Michael Moore
Year Of Release :  2015
Principal Cast :  Michael Moore, Various.
Approx Running Time :   120 Minutes
Synopsis:  Michael Moore travels to various countries around the world to look at everything from education, lifestyle, crime and punishment, and an 8 hour work day to see why the rest of the world lives better than America does.

As a raconteur of controversial documentary material, there’s perhaps none larger (literally or figuratively) than American filmmaker Michael Moore. After tearing apart the US military machine in Fahrenheit 9/11, the US medical clusterf@ck in Sicko, and America’s greatest problem – guns – in Bowling For Columbine, Moore ventures outside of his country’s borders to “invade” other countries and investigate why his countrymen have not only shorter lifespans than the majority of the developed world, but also poor records on education, work/life balance, and a general dissatisfaction with living in what is arrogantly described as the “greatest country on Earth.” 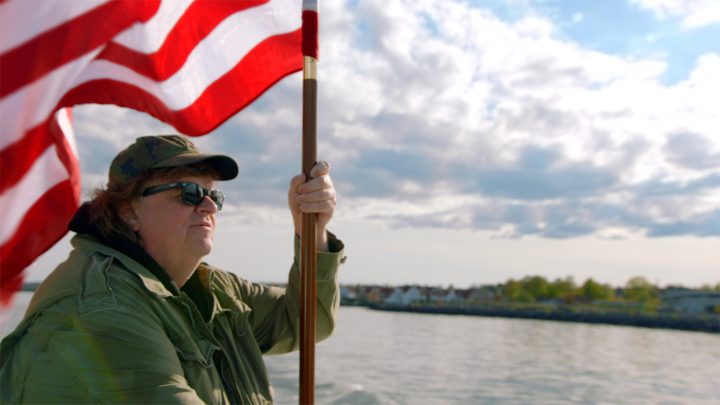 Where To Invade Next? is the kind of film that really only plays well inside of the United States Of America. Externally, I watch this film and just nod my head at what Moore “uncovers”; the majority of countries he visits to “steal their ideas” are liberal European ones, such as Finland, Italy, Iceland and even Slovenia, although he does venture southwards to the North African nation of Tunisia as well. These countries have vastly different ideas on combating social ills than the USA – Moore, appropriating a vaguely rotund Columbus, “discovers” the Finnish approach to education involved almost no homework (or at most, a minuscule amount), while Slovenia offers free university education for all, even visiting nationals; at home their compatriots are encumbered with thousands of dollars of debt. Moore also takes aim at American “justice”, serving a slice of irony in his look at Iceland’s vaunted imprisonment of big bankers who ruined that nation’s economy – while almost nobody in America was jailed for the collapse of the world economy following the GFC in 2008.

In terms of health and wellbeing, Italy offers up a significant alternative to America’s model of horrific “minimum wage” conditions and having to work two or three jobs just to make ends meet; companies and employees are given around five weeks of paid annual leave, on top of any annual public holidays (also paid) and one of the worlds best maternity leave opportunities. For those of us living outside of America, we see this kind of thing and just take it for granted (the Australian workforce has something very similar to this, in any case) and as an outsider it simply reinforces just how lucky many of us are that we don’t live in America.

Moore’s film makes it patently clear to Americans that the American Dream is, for many, just that – a dream, and an unattainable one at that – as he uses other country’s opinions on his country to lambast the stupidity of American greed. For it’s just that that prevents America being the progressive country it could be: greed prevents people getting universally available health care, greed and capitalism prevents American kids being given a better, healthier and more humane education (Moore’s visit to some of France’s early years schools shatters the American myth on what food and nutrition, as well as educational demands are placed on both educators and the children alike), while progressive ideas such as women having equal say in a country’s political and social structure (as established superbly by Iceland’s mandated balance of corporate employment) don’t seem like some far off fantasy as simple common sense. A trio of Icelandic women blast American culture for the self-absorbed, me-me-me ideology that it is, effectively ruining a country thanks to the attainment of wealth and “power” for what… a more comfortable bed? They have a great point. 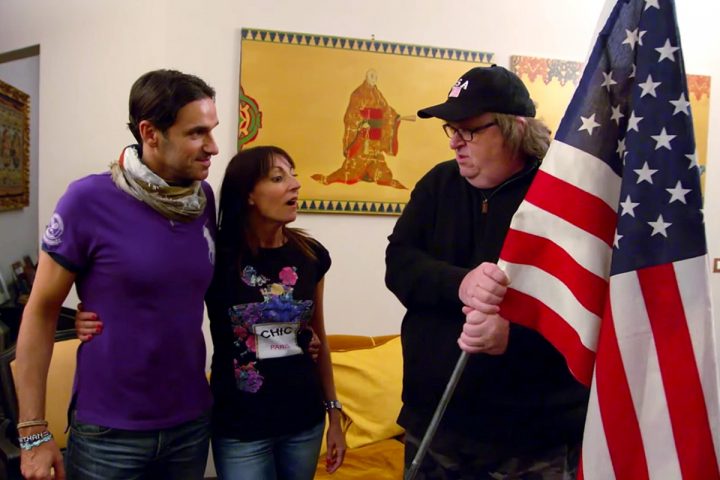 Moore’s direction involved his typical hyperbolic imagery mixed with that patented droll voice-over, the kind of thing that suggest he’s almost resigned to American stupidity when tackling issues other countries have long since sorted out and moved on with. There’s a brief sidebar into Germany’s continual remembrance of the Nazi regime, a sojourn into Moore’s personal reflection on the fall of the Berlin Wall (which I admit is a bit of a stretch to warrant inclusion here) and a gamut of interviews with businessman, maximum security inmates and the Average Joe on the street, who continually remain aghast at how bad Americans have got it. An Italian couple are simply agog that America doesn’t have a mandated paid vacation system in place – this couple travel the world nearly a month and a half a year thanks to the Italian Government’s mandated leave system – and cannot understand why America hasn’t implemented something similar.

America might claim the title of “the most powerful country on Earth”, but that doesn’t mean it’s the greatest. In many areas America falls well short of being not just great, but even simply competent. Like a kid who peaks in highschool, America’s has been left to pick up the garbage while the rest of the world has progressively gone on to bigger and better things. Having all the nuclear weapons in the world doesn’t mean squat if your population is increasingly disenfranchised, maligned, marginalised and beaten into submission by a corporatised social structure bereft of humanity or inclusiveness. Michael Moore’s Where To Invade Next? might seem to Americans as some far-fetched fantasy, but as somebody who actually lives in a country where we have a lot of the benefits implemented in this film, I can assert that I’d rather live here, than over there in the land of the free.

5 thoughts on “Movie Review – Where To Invade Next?”