Great horror films come along every so often. Great Christmas horror films come along as rarely as Gremlin shit. Based on the mythological anti-Santa, the ancient Bavarian folklore legend of Krampus, who arrives on Christmas not to give, but to take, Krampus is a holly, jolly Christmas horror film that delivers chilly fun and a bloody creepy time for everyone’s favourite holiday season. It feels weird saying a seasonal horror film is actually a bunch of fun, but Krampus delivers just that with its twisted take on losing the Christmas spirit. Filled with B-movie exuberance, a delicate touch of implied violence and horror (don’t worry moms and dads, the film is surprisingly light on blood and gore, except where essential to the story) and a nice humorous streak threaded within it, Krampus‘ is the kind of film you should rug up with, turn off all the lights, kick back with some egg-nog, and enjoy. 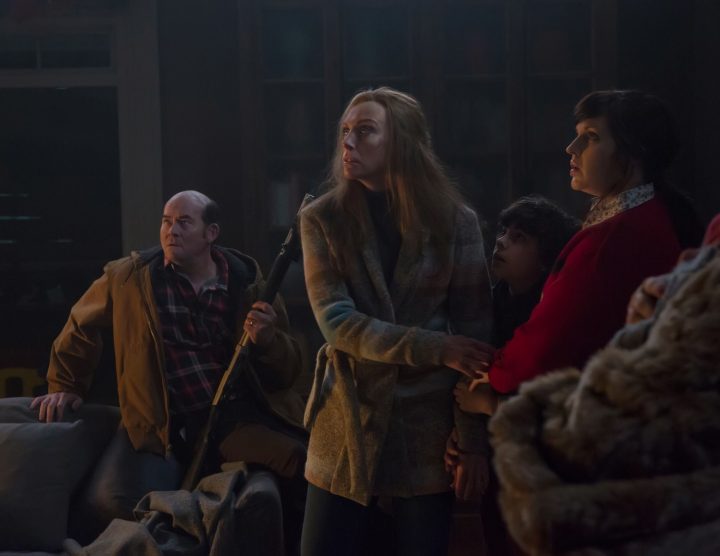 Plot Synopsis courtesy Wikipedia: On December 22, a suburban family gets together to celebrate the holidays—Tom (Adam Scott) and Sarah (Toni Collette), their children Beth (Stefania LaVie Owen) and Max (Emjay Anthony); Sarah’s sister Linda (Allison Tolman), Linda’s redneck husband Howard (David Koechner), their odious children Stevie (Lolo Owen), Jordan (Queenie Samuel), Howie Jr. (Maverick Flack), and their baby daughter; Sarah and Linda’s aunt Dorothy (Conchata Ferrell); and Tom’s Austrian mother, who is affectionately referred to as “Omi” (Krista Stadler). Max wants to continue the family’s Christmas traditions, but tensions between various members of the family keep everyone from having a good time and the family lose their Christmas Spirit. Shortly afterwards a severe blizzard appears and cuts out power in the entire town; as the night wears on, sinister events begin to take place, with the children of the family going missing, snatched up by the evil Krampus and his grotesque minions. 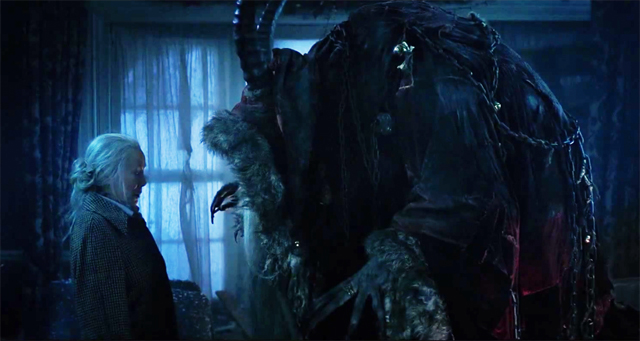 In years to come, I’m hoping Krampus will become a kind of seasonal mini-classic in the same way Gremlins and It’s A Wonderful Life have. I doubt that’ll happen, but here’s hoping. Krampus is a hugely enjoyable creature-feature, starring some delightful live-action animatronic designs and delicate CG work. It’s a kind of darker “kid who loses his belief in Santa” fable than we’re used to, given that most film-makers approach Christmas a joyful, aww-shucks romanticised notion to be built upon; even the most dire Hollywood comedies have a streak of love about them. Krampus eschews the warmth and bucolic approach to Christmas in favour of a dark, fabulously sinister evocation of one of the world’s most hitherto unknown seasonal myths – I had to Google the backstory to the legend of Krampus, which is an electrifying little premise designed to terrify young children; I’m only surprised a film hasn’t come along about it until now! – and under the steady hand of director Michael Dougherty (co-writer on films such as Superman Returns and X-Men: Apocalypse), the film’s ensemble-in-a-box aesthetic works superbly well.

Krampus harks back to the days of a film’s monster being a practical effect, rather than a poorly rendered CG one. Remember Jeepers Creepers, with the Creeper being a Man In Suit? Remember all those 80’s fantasy films like Neverending Story and Labyrinth, where most of the creatures were either puppets or some manner of real practical design work? Krampus gives off that vibe in spades, with its titular monster a truly frightening visage of claws, horns, clanking chains and cloven feet. Krampus is like a reverse Santa, the chain’s a minor-key version of your typical Christmas bells, and the use of Elves and other grotesque seasonal aberrations – deadly dolls, murderous gingerbread men, a gluttonous jack-in-the-box, et al – making for a considerably chilling conceit for a film to enjoy. The Krampus himself has a solid presence within the film, a mix of great sound design, clever lighting and editing, and a terrific impact visually overall. His arrival on the rooftops of the neighbourhood’s snowbound landscape is skin-prickling stuff indeed. 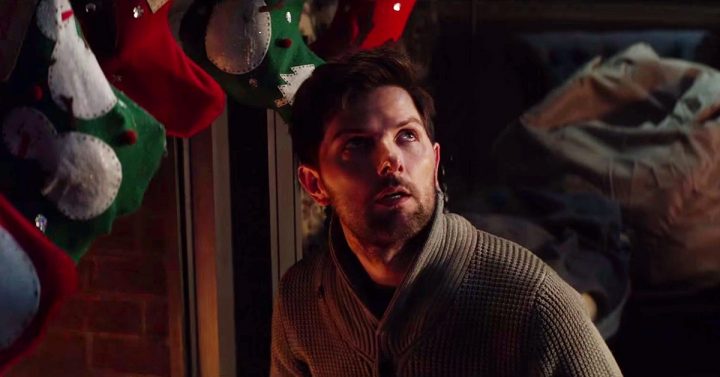 The film’s core element of success is its cast, notably Emjay Anthony as Max, and (somewhat surprisingly) Toni Collette as Adam Scott’s uptight but loving wife Sarah. Although suffering a deficit of time in which to really cohese with the viewer as a legitimate family unit, both Tom, Sarah and their family, and Howard and Linda’s abrasive and repellent gaggle of offspring engender a lot of empathy from the audience as the film’s plot unravels into a screaming race. Emjay Anthony provides the film’s real anchor of emotion; he’s the kid who’s on the cusp of no longer believing in Santa, so much so that he gets into a fight with a kid during a school production of the Nativity (from what I could tell), and writes a letter to Big Red wishing he could go back to the time when Christmas was so much better. Toni Collette is the exasperated Sarah, juggling a husband who works a bit too much with a pair of children dealing with the growing pains of adolescence and loss of innocence, and she is brilliant in the role. Seeing Collette handling herself amid the film’s riotous puppet monsters and ludicrous narrative hurdles with such aplomb and dedication is pure delight, a gilded frosting on a fabulous cake you have all to yourself.

The supporting cast are also great, from David Koechner’s wide-shouldered man’s-man Howard, to Two And A Half Men’s Conchata Ferrell as the alcoholic and entirely judgemental Aunt Dorothy, to the relatively brisk younger actors playing the various children in the film. Front-end heavy on building the film’s antagonistic links before unspooling into a fearfully spooky series of increasingly menacing encounters with supernatural Krampus and his minions, Krampus engages with full force once it becomes apparent the gradual build-up has waned and the audience is looking for creepy things in the shadows. 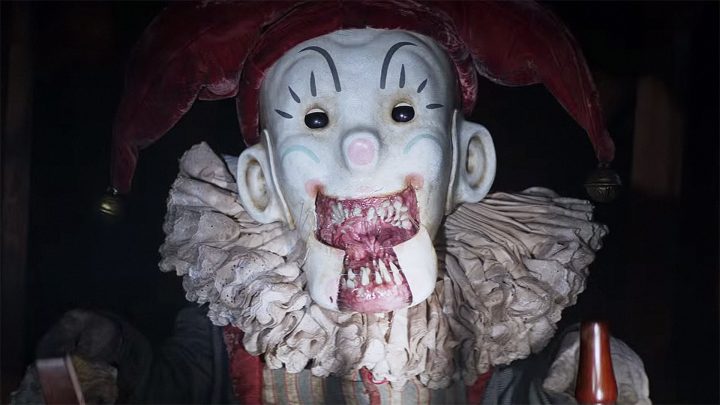 Michael Dougherty’s direction is commendable as well, mixing well-worn horror tropes into a fresh feeling sense of modernity; he holds back on giving us the full Krampus until a key moment at the end, and maintains an air of mystery over all that transpires. Indeed, had I not read up a bit on Krampus’ history much of the film’s iconography would simply be cool stuff to look at rather than expository mythology motifs (the chains, for example, are a supposedly Christian-themed way of the Devil binding Krampus to Hell) and with multiple viewings I think this film is only going to grow on me. There’s an omnipresent sense of the macabre and melancholy infused into the film’s dark design, from it’s hellish “Christmas Shopping” opening credits montage to its allegorical horror-sting final shot, making the cautionary tale genre a little confusing in its actuality – having said that, if you enjoy a decidedly adult sense of humour with your horror films, Krampus will deliver some decent laughs too.

Krampus delights in an almost sadistic toying with the viewer in the delivery of its monstrous activities. Nightmarish tones brush against a childlike glee in scaring the pants off audiences, and as a mix of B-movie horror and A-level production value it’s a real crackerjack of a film. Solid production design, equally brilliant direction and sporting a heavy throwback to practical effects over CG, Krampus is the kind of up-loud, in-your-face monster horror that’ll keep you covering your eyes beneath the bed covers. A perfect roaring-fire view, Krampus is thor-ghouly entertaining.