To be honest, I’m not sure which I’d prefer more. If (when) aliens ever attack, will they come down Independence Day-style and just blow us all to hell in a matter of moments? Or will they – as depicted in The 5th Wave, gradually unleash ever-increasingly destructive elements onto our planet in what I think is the equivalent of pulling wings off a fly and waiting for it to die a slow, painful death. The 5th Wave is neither logical, nor intelligent, and becomes another in the waning parade of Young Adult films revolving around a plucky female protagonist up against the end of humanity as she knows it. Casting Chloe Moretz in your film shows at least a modicum of respect for an audience, and I’ve generally found her a competent actress when given material suited to her acting style – wide eyed and breathless – but here, taking a heavy sci-fi opus on her own shoulders, she does feel a little out of her depth. 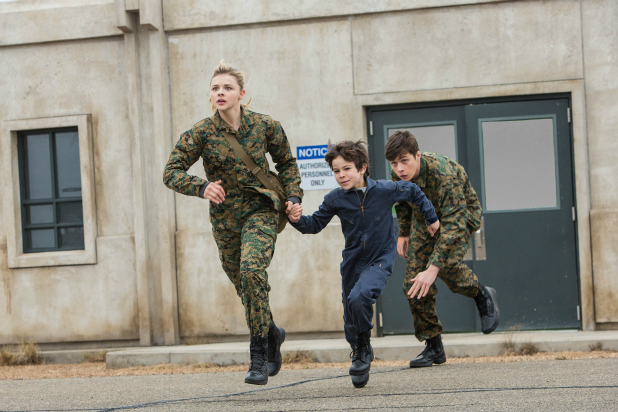 The 5th Wave opens with an on-the-run Moretz accidentally murdering some poor injured man in a shattered gas-station. Talk about your major downers, right? Moretz plays Cassie, a sweet-natured party girl caught up in the end of the world when Aliens arrive in our atmosphere and commence eradicating humans with the slowest, most drawn out series of “waves” of disaster in cinema history. Cassie and her brother Sammy (Zackary Arthur) become separated following a bloody massacre at a refugee camp sees their father killed; as she treks towards the military base to which Sammy has been taken, Cassie encounters a variety of obstacles, including Evan (Alex Roe), who may or may not be an alien in disguise, and the omnipresent threat of discovery.

It’s fairly obvious from the outset that The 5th Wave takes a lot of its End Of The World aesthetic as a poor man’s Independence Day – the kind of energy and brouhahah Emmerich’s blockbuster had in swathes is utterly absent here. The film tries for a grim-n-gritty take on the alien attack genre, but it’s neither grim nor gritty enough to warrant attention beyond mere effects-driven destruction. And even that feels strangely inert, as if the production budget forgot to carry the one when tallying up the available funds for CGI.

There’s a point early in the film when Moretz’ Cassie directly questions why the aliens don’t “just get it over with”, why all the waiting and time between waves. Her father, a morose Ron Livingston, replies that the aliens must need Earth relatively intact, trying to kill us off without actually making the planet uninhabitable to anything. So I guess the aliens are engaging in a tender apocalypse, then? It’s laughable, truly, but the film takes itself so seriously by this point you feel sorry for the actors having to deliver lines of dialogue so risible it’s painful. Also painful? Having to watch Moretz run in slow motion, which occurs a lot in this film.

The 5th Wave is a confusing mixture of horrific imagery (a barn full of dead people), teen angst, alien invasion “terror”, and Moretz traipsing through the woods a lot, but it can’t seem to muster any energy to really attack its source material with any vigour. Instead, the film feels just generic, a join-the-dots action adventure masquerading as teen-centric sci-fi and offering little compensation for any audience paying to see it. It’s okay to throw a bunch of large-scale set-pieces at the screen to give a sense of “epic-ness”, but when the emotional core of the film rattles around like a pebble in a glass jar, all the explosions, destruction and grandstanding on earth won’t fix your film. 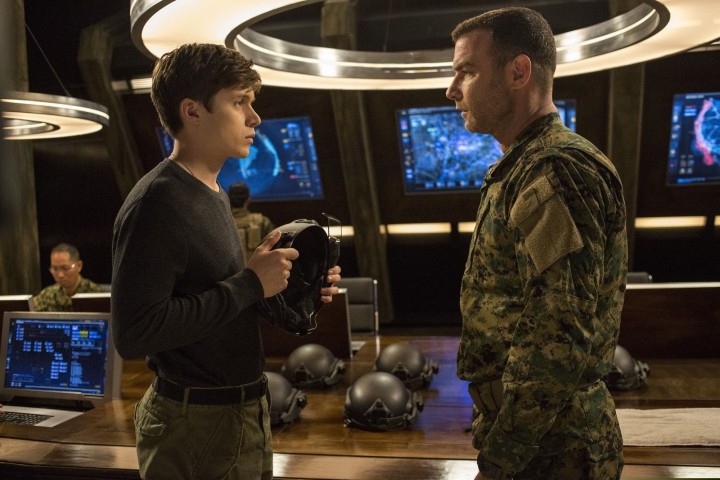 In leading the film, Moretz does a workmanlike job, but ultimately can’t salvage much. Her character feels bland, the kind of mix-up of teen bravery and television-learned survivalist skills that enable her face to become smeared with dirt and her breathy, tremulous escapades to allow personal growth of some kind. Only, the writing on this film isn’t strong enough to give us an arc for Moretz that’s worth following. Sure, she looks pretty, and handles the acquired machine gun with an assured posture probably echoing back to her Hitgirl days, but the film’s central demand that she simply encounter levels of destruction, human tragedy and animosity as she goes searching for Sammy feels more like a hard-core paintball skirmish than any legitimate threat.

Moretz is encumbered with the lion’s share of drama, but alongside her are old stagers like Liev Schrieber, as a military commander set out to rid the planet of aliens using surviving children (hence the YA brief of the film), a shockingly elderly Maria Bello as Sergeant Reznick, and, well, that’s it. The cast of young actors provide ballast to a wide ensemble, but nobody outside Nick Robinson, as Cassie’s love-interest Ben Parish, offer much in the way of compelling drama. Struck by turgid direction and haphazard editing, and staging that feels more like an afterthought than a well concieved plan, The 5th Wave struggles towards its boring, yawn-inducing ending in a provincial, low-key way that strikes fear into the hearts of those considering possible sequels.

No, The 5th Wave is not a good film. It’s passable at best, the kind of film pretending to offer a lot but instead meanders to cliché and generic plot points that any hardcore sci-fi fan can see coming a billion parsecs away. Moretz does a solid job in an undemanding role, while J Blakeson’s direction lacks precision when it should strike hard. The 5th Wave won’t set the world on fire, and it won’t do much for you other than bring about an unshakeable coma.