As a film buff, it’s taken me a while to get around to Gilda; it’s been something of an albatross for me, ever since it was featured in Frank Darabont’s film version of The Shawshank Redemption. Seen as a classic – classic enough to feature in a film set in the period at least – is stars the luminous Hollywood icon Rita Hayworth, and remains probably her most famous role. Featuring a duo of hummable songs, a sizzling performance by Glenn Ford, and some terrific cinematography in gorgeous black and white, Gilda is the personification of film noir. 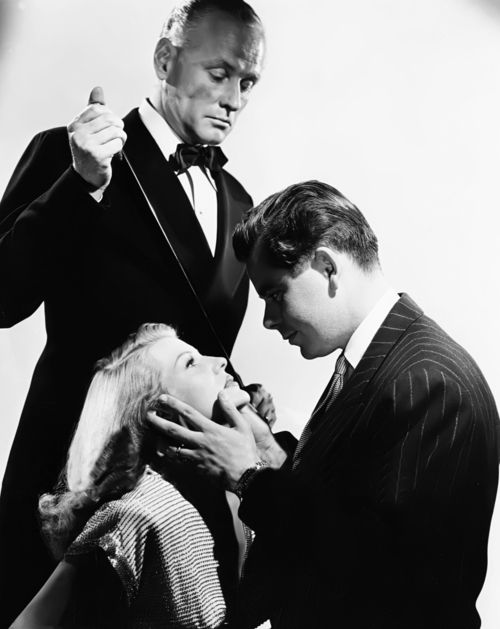 Small-time casino cheat Johnny Farrell (Ford) is saved from a probably burglary by mysterious stranger, Ballin Mundson (George Macready), who as it turns out owns a casino in the Argentinian city of Buenos Aires. Initially, Farrell tries to swindle Mundson’s establishment, but is caught, and Farrell offers to work for Mundson in return for not being arrested. As Farrell works for Mundson, he climbs his way up into the businessman’s good graces, eventually becoming his right hand man. So when Mundson returns from a trip married to a former lover of Farrells, the beautiful Gilda (Hayworth), with whom Farrell now has an acrimonious, tempestuous relationship with. Initially suspicious of her motives, Farrell and Gilda engage in a subversive tete-a-tete, their attraction mutual but inevitably impossible while she remains married to Mundson. However, when Mundson apparently kills himself following the murder of a German business associate, it would appear the dice are finally rolling Farrell’s way, as he assumes control of the casino and marries Gilda almost immediately.

Gilda simmers with a raw sensuality; strike that, a raw sexuality, redolent of the limitations of the Hays Code at the time, nothing is overt. Instead, Rita Hayworth’s sexuality is explored via her aggressive, seductive, musical, coquettish behaviour throughout the film, a legitimate screen siren giving Glenn Ford the biggest blue balls ever, I’d wager. Hayworth’s performance as Gilda is the very model of femme fatale, a woman who draws men into her world involving – usually – violence, or sex, or drink, to achieve her ends. The exact reason for her marriage to Mundson is never explicitly revealed, although it’s heavily implied she’s doing it to get at his money, while her failed previous relationship with Farrell is also mysterious, leaving only their overt animosity to draw a conclusion from. As she prances and lopes through the film, director Charles Vidor makes the absolute most of having her in front of the camera – Hayworth is both stunningly beautiful and tremendously sexy (those eyes, dammit!) and the moment she appears in the film (which is the scene we saw in Shawshank – nice job, Mr Darabont!) Gilda arrives as a force to be reckoned with. 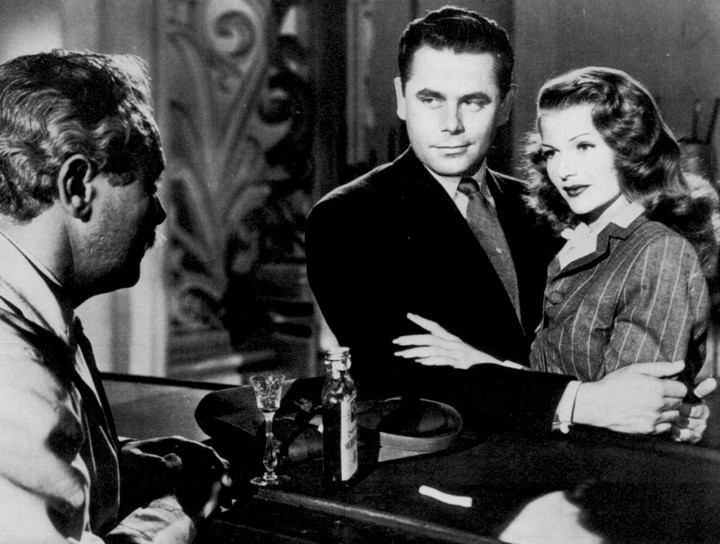 The underlying criminal narrative, through which both Farrell and Mundson commit illegal acts within the Argentine territory, feels almost secondary at times: apparently, Mundsen is the head of a cartel monopolizing tungsten, a precious mineral through which Mundson hopes to exert control over the world’s supply, and although this eventuates into something of a MacGuffin, it does provide some nice character moments for both Farrell, as he sways between loyalty to his employer and his own moral fortitude, and Mundson, whose harsh visage indicates a kind of cinematic villainy or untrustworthiness inherent in the narrative. Where the film languished in this part of its narrative, it strengthened whenever Hayworth and Ford are paired on screen, and thankfully that’s quite a lot. The chemistry they have with each other is sizzling, although their words – they appear to “hate” each other quite a lot – belie their characters’ true feelings. Ford makes a great leading man, going toe-to-toe with Hayworth in the acting stakes here. Sure, she’s top billed, but Ford is her equal within the film’s story.

While the film obviously belongs to Hayworth, Ford, and somewhat less to Macready (who suffered a car accident years earlier and had a permanent facial scar ever since, making him ideally suited to villain roles thereafter), the supporting cast are also in top form. Steven Geray provides minor chuckles as Uncle Pio, the dude who works in the casino’s washroom, and who always tells it like it is, regardless of sex or station in life, and Joseph Calliea spends a great deal of time just skulking about the movie until the final reel, when he reveals his true motivations and provides a nice pivot for the climax to occur, as an Argentinian investigator. Joe Sawyer plays one of Mundson’s goons, who lacks smarts, and he’s also rather funny here and there, and Mark Roberts, who is better known as the star of the short-lived television serial Black Arrow (1944), appears in a small role as a suitor for Gilda’s affections midway through the film. 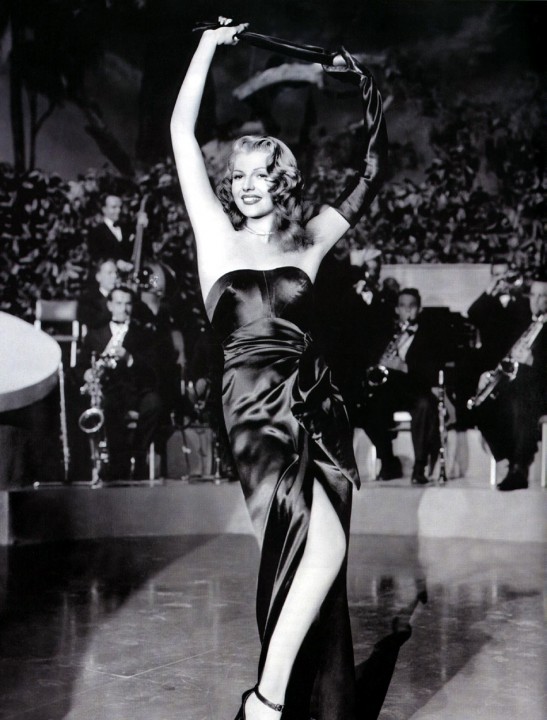 The most striking thing about Gilda is the way it’s shot; instead of crisp black and white, there’s a glowing softness to the film (although that might be the print the BluRay I watched was sourced from…?) and it’s really rather lovely. B&W films always have a stark menace to them at times, particularly films shot indoors in dim lighting, and Gilda’s cinematography covers all bases in both tone and style. Lensed by five-time Oscar nominated cinematographer Rudolph Maté, who worked with Charles Vidor two years previously on Cover Girl, Gilda looks stunning, with the use of light and shadow, and forced shadow (a second-act shot involving Ford in bright light and Macready in almost silhouette works magnificently), just a film fan’s dream to look at.

The framing of the film is also interesting, in that the camera really does move about the movie a lot, and not just with hip-height shots too. Vidor uses overhead, low-slung and the occasional Dutch angle to achieve a specific look to Gilda, although the way he shoots Rita Hayworth, in soft shadow with some nice backlighting to accentuate her hair, just made my jaw drop. One of the film’s most famous scenes, in which Hayworth attempts to perform a public strip-tease for Ford’s character, simply highlights what a true movie star can do in front of the camera, and Maté uses his framing, together with some terrific editing, to build the sequence’s frisson to the point it’s fit to burst.

Gilda is incredibly sexual, although nobody takes off any clothes (even Gilda’s strip-tease is just her removing some gloves…) and the tension between the characters is ripe with innuendo; here, it’s more about what isn’t said than what is, and I take my hat off to folks working during the Code Era to make these films work as well as they did considering the restrictions placed on them by The Law. Gilda’s smoking hot Argentinian story lacks the magic of actually being in Argentina (the film is largely studio bound, with only a couple of moments genuinely filmed outdoors, and even then probably somewhere in California) but more than makes up for it by having the legendary Rita Hayworth sizzling up the screen in her most enduring role. Watching her act, watching her with Ford on the screen together, I lament the loss of legitimate Hollywood A-list superstars of that era; nobody working today could hold a candle to the class of the women of Hollywood’s Golden Age. Gilda is the very definition of class, and a brilliant film to boot.