For the very longest time, the depiction of Frankenstein’s monster, parodied in cartoons and television series such as The  Munsters, was associated by the definitive portrayal of the creature by one Boris Karloff, a studio player in 1931 at the time Frankenstein was released. Directed by James Whale, Frankenstein is based on Peggy Webling’s popular stage play, which itself was derived from Mary Shelley’s original text. Instantly popular, and heavily censored in some quarters for several blasphemous lines of dialogue (and a controversial scene in which the monster kills a child), the film has become an iconic moment of horror cinema, and, alongside Dracula, Dr Jekyll & Mr Hyde, and other notable productions in the years to come, paved the way for Universal becoming the home of horror films. 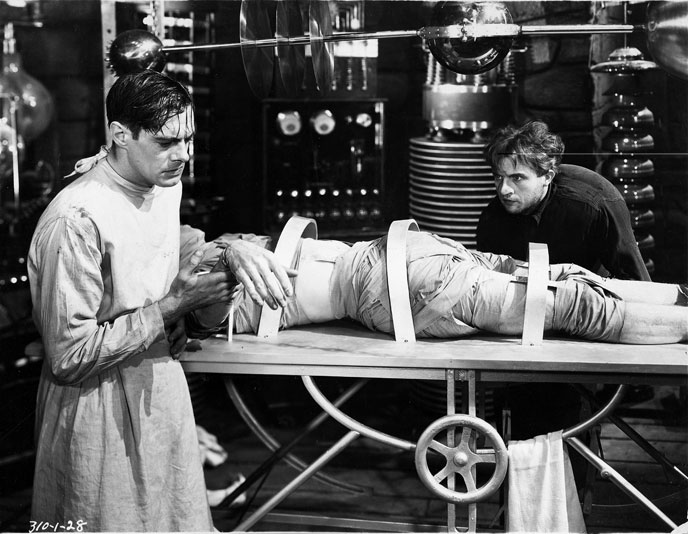 Henry Frankenstein (Colin Clive) is a scientist working on bringing life to the recently dead. After leaving his University to further his controversial study, Henry and his hunchbacked associate Fritz (Dwight Frye, who also played Renfield in the studio’s release of Dracula) dig up bodies and steal parts (including brains) to use in his hideous experiment. Henry’s fiancée, Elizabeth (Mae Clarke) and her friend Victor (John Boles) are concerned with Henry’s reluctance for human company, and beseech him to stop his experiments and return home. Henry’s former collegiate professor, Dr Waldman (Edward Van Sloan, who played Van Helsing in Universal’s Dracula the same year) exhorts him to stop, but Henry continues, giving life to a childlike brute of an abomination (Boris Karloff, under Jack Pearce’s extraordinary and iconic make-up), a monster which breaks free and begins to terrorise the local townsfolk.

Casual conversation with folks regarding Frankenstein as a concept will often consider it to be a Monster or Horror genre entry; personally, I’ve always felt Shelley’s cautionary tale to be a tragedy first, with horror overtones thrown in. The creature itself is only monstrous through Frankenstein’s hubris, through cavalier, insane God-complex frustration, and its very nature, being of childlike mentality, is as sad and achingly haunting. The film itself, on first watch, is equally haunting, notably thanks to some terrific cinematography by prolific lenser Arthur Edeson, who gives the film a vaulted, chasmic feel with the stark black and white photography. Largely studio bound, Frankenstein evokes all manner of eerie, macabre tones as Henry and Fritz not only dig up bodies (in the first scene, which sets the tone for the film, basically) but raise a corpse of assembled limbs and organs into the sky to bring it to life. Henry’s proclamation that “It’s alive!” is followed by the hugely controversial “Now I know what it feels like to be God”, was seen as a blasphemous statement (even by pre-Code 1931 Hollywood) and was cut in many territories, but is back in the fully restored version available today. 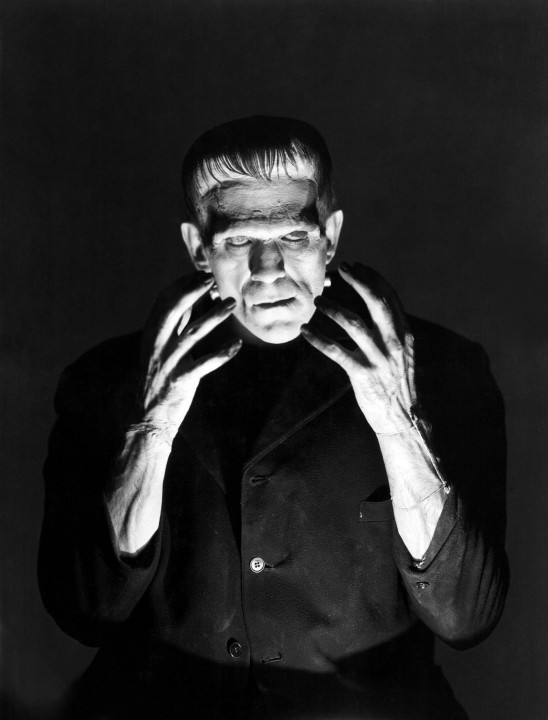 For a film broaching its 85th birthday in 2016, Frankenstein is eminently entertaining and thoroughly modern in its timing of prescient social climes. Ideology of thought, that whenever somebody questions the order of things they’re considered insane, is a trumpet-call of social progression here, layered in Henry’s obviously skewed belief that man ought to replicate God, rather than whether he should. It’s a classic science-versus-nature argument, and one handled extremely well by Frankenstein’s opening half. The second half of the film becomes the oft-replicated torches-and-pitchforks chase of irate townsfolk through the mountains after the creature, so it lapses with subtext into a fairly generic pursuit narrative, but thanks to Karloff’s mewling performance as the object of Henry’s fascination, the film never pulls back in honouring the legacy of Shelley’s tragic, magical fable.

Indeed, Karloff is terrific beneath his monstrous makeup. More knowledgeable people than I can advise if this was the first time the creature was depicted in his classic “flat head, neck-screwed, lean-forward” stumbling version, but if it was then it’s little wonder people simply imitated it for decades afterwards. Although the creature is horrific by nature, and Karloff’s makeup effects are indeed matchless in simplicity of design, there’s an elegance and a beauty to what Jack Pearce achieved in striking an immediate visual image audiences could associate with. Karloff doesn’t utter much beyond grunts, groans and hissing, in his performances opposite those he encounters, giving the creature a newborn mentality mixed with inhuman strength and a fight-or-flight reaction that provides much of the film’s latter-half plotting.

Colin Clive is wonderful as the charismatic yet fatally flawed Henry Frankenstein, a suave, obsessed scientist to whom even the barrier of death holds no fear. Clive’s monologue to Dr Waldman about pushing the boundaries of science almost had me believing his justification for what he does, even though we know it to be wrong. Waldman, played by Dracula star Edward Van Sloan, is a larger role than I predicted when I started watching (the actor himself “fronts” the audience before the opening credits, to warn them that what they are about to witness may horrify some of them…. it’s a fun little gimmick that has been parodied countless times since), and provides a paternal voice of reason against the absurdity of what Henry is asking. Comparatively, Henry’s father, Baron Frankenstein (Frederick Kerr), is a blustering old blunderbuss of a character, the wobble-chin type who thinks their son ought to marry early, produce children, and not fiddle-faddle with silliness like “science”. Kerr’s massive goyter is pronounced, his acting is wooden and forced, and the character strikes me as largely pantomime amid a film of generally serious tone. 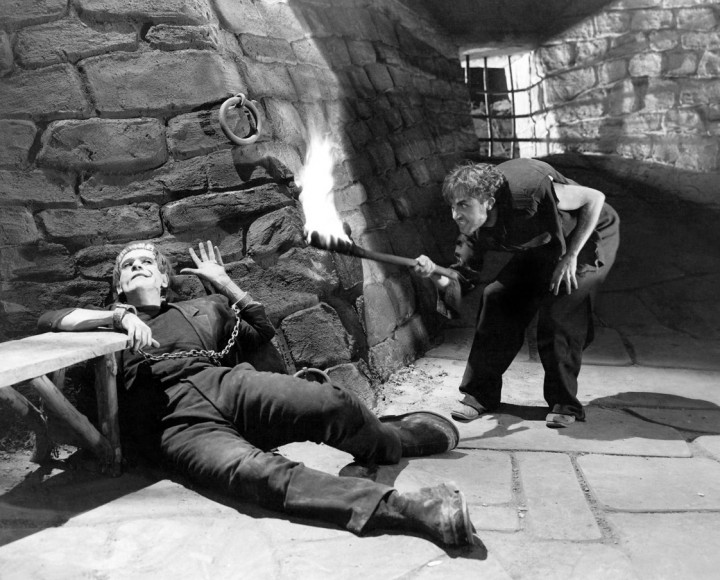 Enabling the film to work outside of Henry’s immediate vicinity is Mae Clarke, as his fiancée, and John Boles, as a possible love-rival to Henry but one which never eventuates. Both Clarke and Boles have a definite chemistry together, a platonic friendship that works as they try to understand what it is Henry is doing. Dwight Frye is suitably hunched as Fritz (no, not Igor, which I was expecting, so I’ll have to find where the Igor derivative comes from), and in one of the film’s more sombre sequences, Michael Mark plays Ludwig, whose daughter Maria (Marilyn Harris) is accidentally killed by the creature, whereby Ludwig carries her lifeless body through town. Again, tragedy rather than horror, although the iconography the film plays with has cemented itself in the horror firmament through popular culture’s usurping of it through misremembrance.

As a technical exercise Frankenstein hits its straps early and doesn’t let up, a briskly paced (75 minutes, really quick!) running time allowing for very few pauses in the narrative. Dialogue is largely excellent, although the acting sometimes isn’t, and the film’s centerpiece of design, the monster itself, is both impressive and endearingly empathetic. Although seen by the film’s denizens as a monster, the creature is simply a tragic aberration trying to find itself in a world born to hate it, which is why I’ve long been dubious about the Frankenstein legacy sitting in the “horror” section. Setting the bar for sequels and remakes to come, Frankenstein is as atmospheric and palpably tangible as legend would have you think it. Defined by a remarkable creature design, the film’s legacy as an outright classic is assured.