Suspenseful, atmospheric, iconic: the original Dracula, starring Bela Lugosi in the title role, is everything fans of the character and horror films could hope for. Featuring brilliant production design, engaging cinematography and a real sense of dread, this early sound film might feel clunky around the edges but stands up as both a product of its time and befitting its legacy. Of course, the film would be nothing without Lugosi in his signature role, his dulcet intonations and charismatic, now-iconic portrayal of Transylvania’s most famous resident has become the definitive archetype ever since. While Bram Stoker’s original novel, and the German-made film Nosferatu, portrayed Dracula as a horrifically disfigured monster, Legosi and director Tod Browning turned the Count into a debonair, smooth-talking man of nobility, with charm to spare; it made 1930’s audiences squirm, and hell if it isn’t a remarkable performance even today. 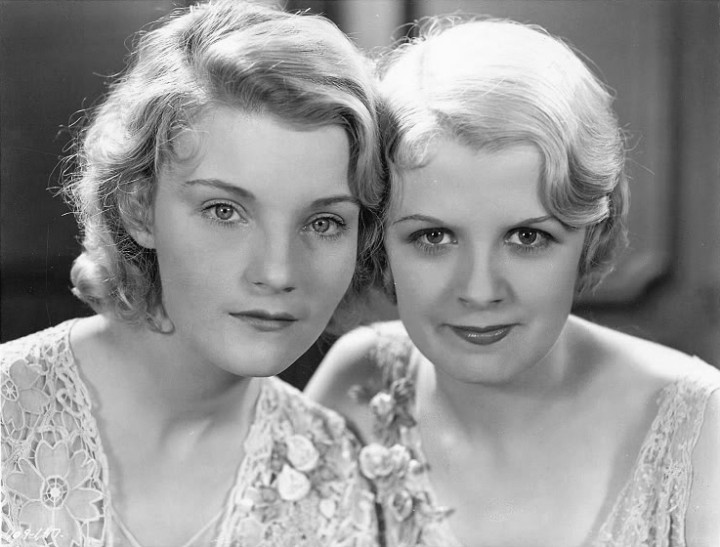 Young solicitor Renfield (Dwight Frye) travels to the Count’s (Lugosi) Transylvanian castle to go over a contract to purchase property in England. Although locals exhort him not to go, Renfield’s methodical nature and inbuilt curiosity causes him to fail to heed the warnings – he is initially met with kindness by Dracula, but is eventually attacked and turned into a slave by the vampire. Trabvelling to England to inspect his new holdings, Dracula meets a local mental hospital doctor, Dr Seward (Herbert Bunston), who introduces the Count to his daughter Mina (Helen Chandler) and her finacee Jonathan Harker (David Manners), as well as Mina’s friend Lucy (Frances Dade). 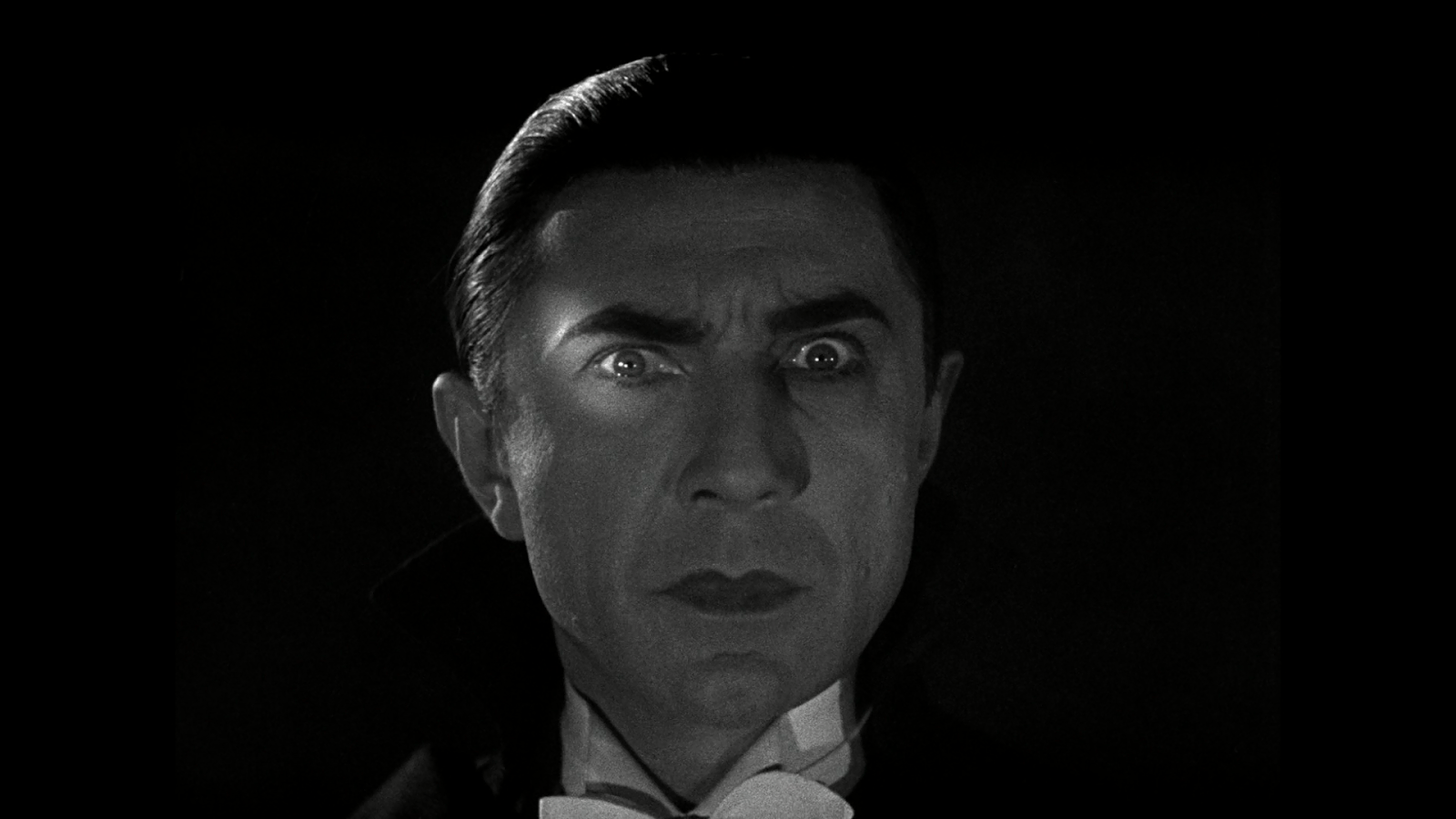 Watching Dracula with the benefit of some ninety-odd years of cinematic history since its release, it’s amazing to finally understand just how much impact this film had on the character borne on the pages of Stoker’s turn-of-the-century novel, and which has seen countless sequels, remakes, variations on a theme and parodies ever since. Casting aside the depictions of the character which deviate from Stoker’s text, which excludes almost all save for Francis Coppola’s Gary Oldman-starring effort from the 90’s mini-monster revival period (a period which also saw Shelley’s Frankenstein remade around Robert DeNiro), Lugosi’s portrayal of Dracula has become the template by which all others are judged. 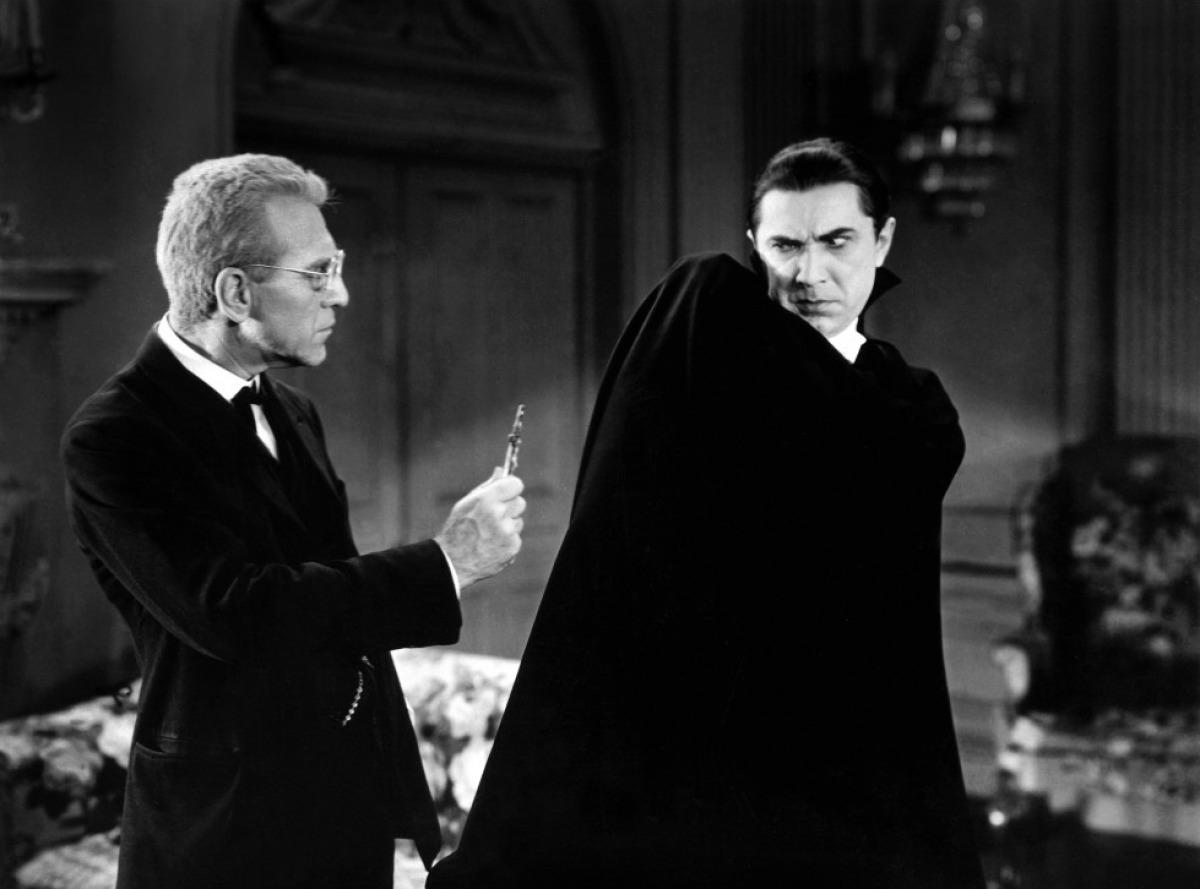 Giving Count Dracula an air of sophistication makes him less a monster in the sense that he’s “ugly” or “deformed” physically, but more deviously charming with the power of his hypnosis making him a truly potent screen villain. Lugosi’s slicked hair and round face, accompanying his deep baritone delivery with punctuated pauses for effect (an accent now almost entirely associated with the character) and his creepy, leering mannerisms whilst attacking his victims, personified evil in a way that could usurp itself into modern society – Dracula was the noble villain of the silver screen. Lugosi’s performance is indeed hypnotic, his screen presence can still be felt even though the relatively bloodless, non-violent camerawork and stagey, theatrical performances style by those involved. 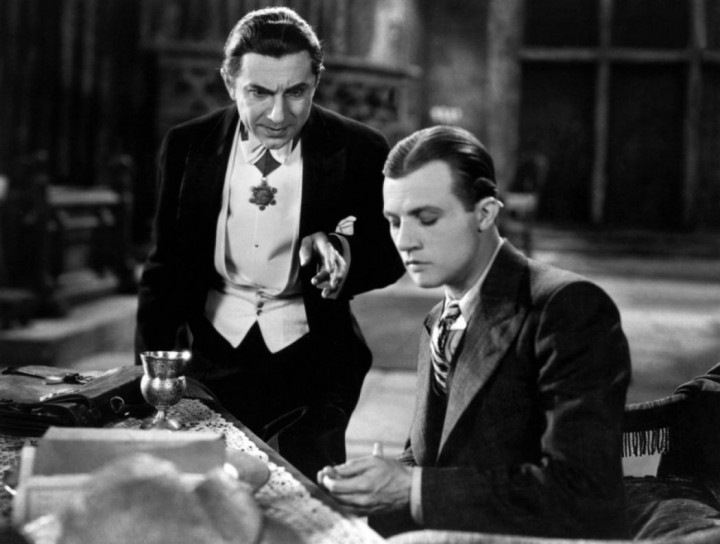 One of the remarkable things about Dracula is just how brisk it all is. Compare this film to Coppola’s similarly plotted version; both films hit specific beats exactly, and the genetics of Stoker’s novel is lodged firmly in the front of the audience’s eyes by both films’ adherence to the source text. Yet where Coppola’s film goes expansive and widescreen with iconography and lavish visuals, Tod Bronwing’s version eschews complexity for brevity and concise storytelling arcs. Dracula isn’t so much a film in which performance is key, but rather the look and feel of the film generates the sense of dread for the audience. One of the more prominent production design elements I appreciated was the film’s constant use of vaulted ceilings, in both Dracula’s castle, and in many of the London-set locales. This allows the actors to almost disappear into the frame, surrounded by a depth of field that draws the eye upwards, “towards the light”, maybe? The film’s set design is exquisite, particularly within the walls of the Count’s castle, which has since become an archetypal depiction of musty, crumbling architecture designed to elicit a sense of death and malignancy from audiences. Lugosi’s opening scene, in which he awakes from slumber with his three wives beneath the floors of his castle, is just mesmerising. 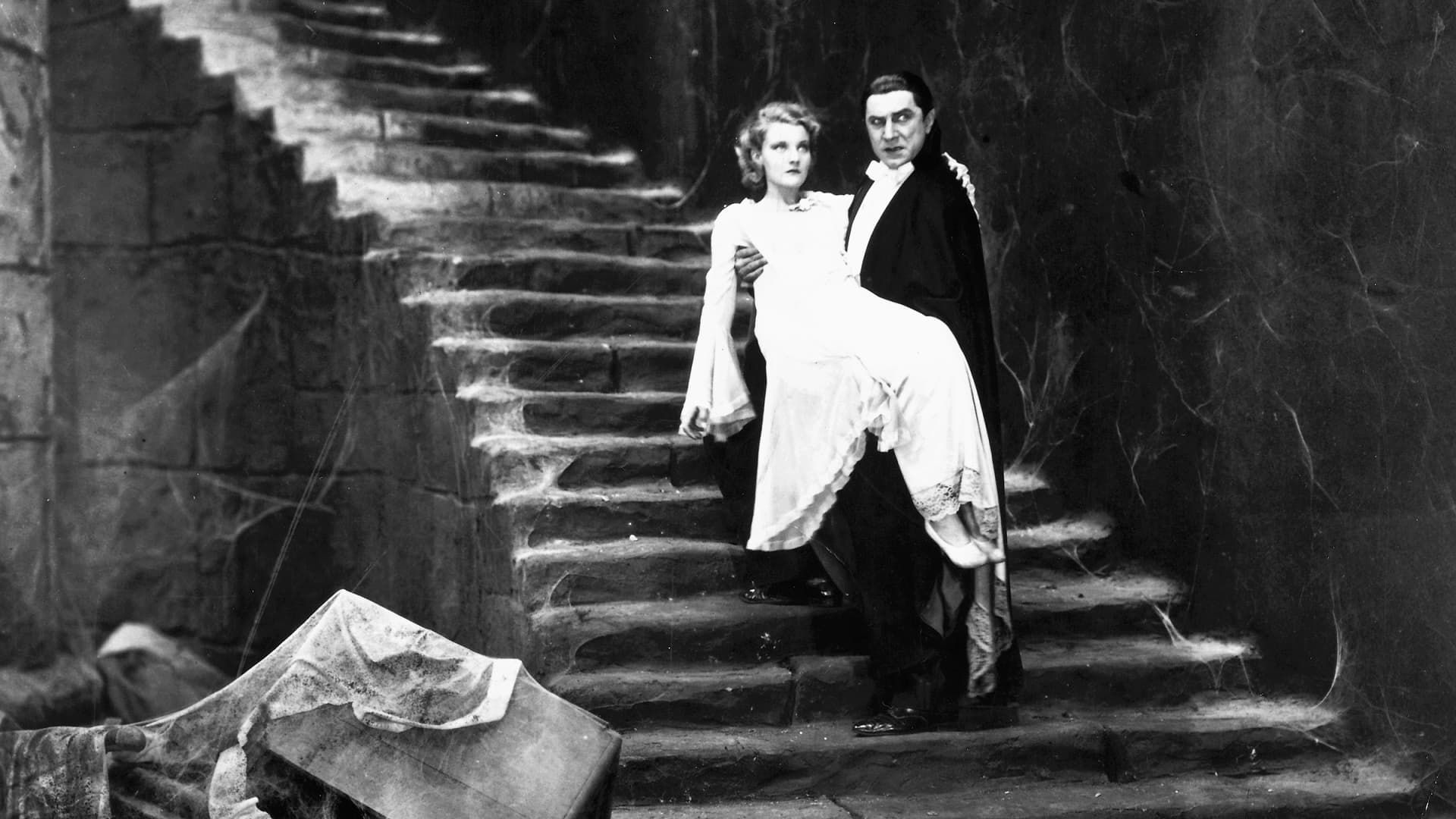 Contrasting the film’s technical merits, the actors aside from Lugosi are largely wooden, overly theatrical, or insipid in their performances. Dwight Frye’s Renfield is probably the most egregious proponent of overacting in an underdeveloped role – his “madman” antics are less mad and more just overblown pantomime, although one could argue that 1931 acting styles really only allowed a certain kind of mental insanity to be depicted. Helen Chandler’s Mina is suitably attractive, but her character lacks depth and the actress does very little to imbue her with much beyond superficial beauty. David Manners’ performance as John Harker (a role given laughably bad life by Keanu Reeves in Coppola’s production) borders on effeminate, as straight-up a leading man as a film could ask for, but with the personality of cardboard. To be honest, I never really found Harker all that engaging in any depiction, so it makes sense that Manners can’t conjure up much else either. 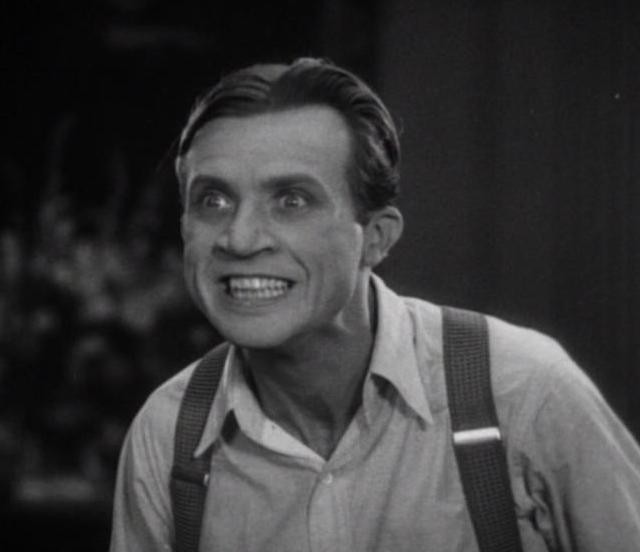 Even Edward Van Sloan’s portrayal of the Count’s nemesis, Van Helsing, feels somewhat subdued. Van Sloan’s performance seems overly theatrical, positively verbose without actuating narrative propellant; indeed, much of the film’s “action” occurs off-screen or between scenes, which is more to do with what audiences were able to accept (and what the censors would allow…LOL) – a by-product of fading to black before we see ol’ Drac take a bite of Mina’s neck, or any other violence, is that it makes the audience fill in the blanks, which for some is way more effective.

The film struggles to give any of the actors aside from Lugosi any real impact – Browning’s refusal to give anyone other than his star a close-up or much beyond a mid-shot is telling, by keeping the supporting cast at a distance it makes his lead role a more prominent one both literally and cinematically. Although his choice of shots and sense of staging for the dialogue sequences is rather staid by modern standards, there’s a real effort to make the film feel off-kilter and creepy. Much of that is to with the dialogue, which imparts much of the rules of Dracula mythology simply by characters deducing what the dickens is going on; again, it’s tell, don’t show, which can be a bit maddening when all you want to do is see Lugosi take a swan-dive into a nest of willing nubile concubines and sate himself on their bodily fluids – instead, we must make do with that kind of thing happening off-screen. I should also note Browning’s use of shadow and light on Lugosi’s face in close-ups – the character’s “hypnotic eyes” effect is achieved with utter simplicity, yet the end result is super creepy to a degree I had not expected. In spite of its limitations technologically, Dracula’s atmosphere and sense of class are always at the forefront of the film’s visual aesthetic. Simply put: it’s little wonder the nuances and character traits depicted here have lasted through the decades since. 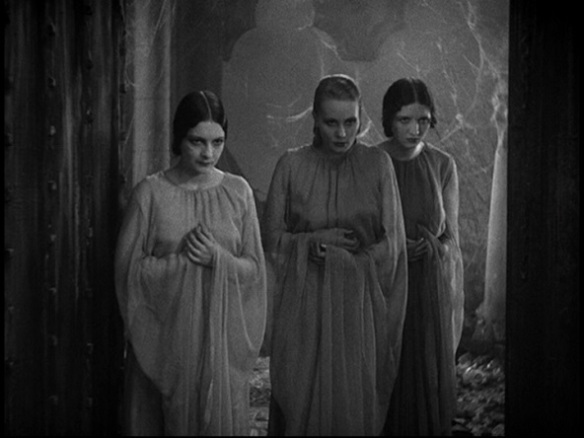 Dracula is a pure, simple product of its time. Briskly paced, lacking considerable depth for most of its characters but giving Lugosi a superstar-start in his film career, and defining a single character almost for all time (modern vampiric re-imaginings have done much to unclasp the Lugosi-depiction from being the pre-eminent pop-culture representation today), Dracula is a legitimate classic in every sense of the word.