Horror films typically work best when dealing with aspects of humanity considered taboo; in Dracula, it’s an eternal man drinking human blood. In Frankenstein, it’s a “man” brought to life from death. For the Wolfman, and The Mummy, the horror is derived from animalistic or afterlife themed body torture. Robert Louis Stevenson’s classic work, The Strange Case Of Dr Jekyll & Mr Hyde, partitions its themes from the idea of split personalities: schizophrenia wasn’t a diagnosed condition at the time Stevenson wrote his book in 1886, with medical thinking of the time calling it a “split-personality disorder”, whereby a person exhibited two or more distinct personalities. The book was a sensation, naturally, and inevitably cinema would come calling for the famous story – although filmed previously numerous times, including John Barrymore’s 1920 silent version, the 1931 film starring Frederic March in his Oscar-winning turn as Jekyll came to be the most popular and memorable of the versions to date. 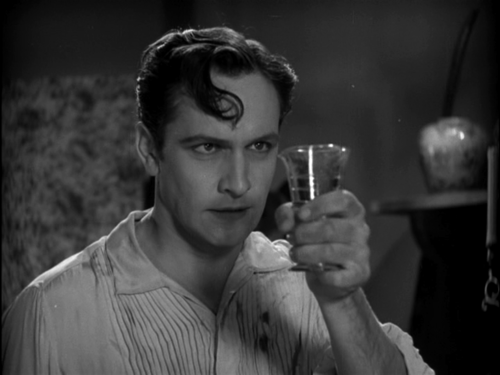 Dr Henry Jekyll (Frederic March) is a doctor of high repute, who is courting one Muriel Carew (Rose Hobart), daughter of Brigadier General Danvers Carew (Halliwell Hobbes). His work consists of concocting a potion which will unleash the “evil” side of human nature – naturally, Jekyll decides to test it upon himself, transforming into a hideous, deformed human creature names Hyde, who is violent, evil and murderous. Hyde imprisons a local prostitute, Ivy Pearson (Miriam Hopkins) in an amaprtment, eventually murdering her to prove his own superiority. Conflicted between his Hyde and Jekyll persona’s, the good Doctor eventually becomes a hunted man following several brutal attacks upon Muriel and her father.

Dr Jekyll & Mr Hyde alludes to a number of all-too human failings: scientific discovery and, ultimately, addiction. Jekyll’s addiction to his potion, to his life as Hyde, in which he feels free of the constrictions of society’s expectations, is given surprisingly short thrift in the end. But it’s there – Jekyll’s gradual fascination with his own alter-ego is delivered with skill and conviction by March’s brilliant performance, essaying both the up-straight Doctor and the hunched, malformed Hyde with startling complexity. Not to mention some terrific make-up effects, performed on début by Wally Westmore (who would go on to work on films from Double Indemnity and Shane, through to Breakfast At Tiffany’s and The Odd Couple, among many others), which give March’s clean-cut looks a substantially grotesque revision and really make him disappear into the Hyde character with ease. The “transformation” sequences are clunky by today’s standards (although still cool anyway), but at the time were revelatory for their intricacy and detail.

Indeed, the film’s cinematography is perhaps a key reason I enjoyed this film so much. As one of the earliest real proponents of “first person viewpoint”, a lot of the film is shot with the camera “being” the character of Jekyll or Hyde, reacting to their surroundings and fellow cast members and offering plenty of “trick” shots for the viewer to enjoy. There’s a duo of “looking into a mirror” moments, achieved with duplicate sets to facilitate the effect of the camera being the one to cast the reflection (see the GIF to the left for the effect), and for 1931 technology the way it looks is remarkable. It woulda fooled many an audience member back in the day. The cinematography is credited to Karl Strauss, who had previously worked on Charlie Chaplin’s The Great Dictator, and the foggy, sensual backstreets of London, and the statuesque, upper-class mansions of the nobility in which Jekyll circles, are brilliantly rendered through the man’s keen lensing and framing. Camera tricks aside, Strauss’ work is sublime here, offering a starkly beautiful, if often malignant visual canvas for director Rouben Mamoulian to draw his horrifying tale upon. 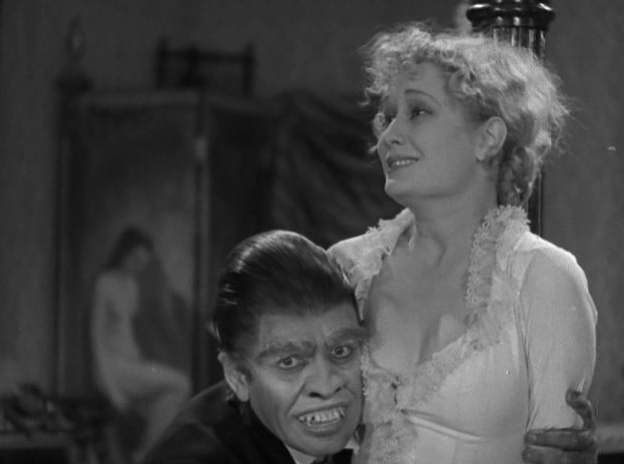 Mamoulian’s direction is magnificent – the film skirts sexual controversy with a number of sequences involving Miriam Hopkins’ Ivy, a prostitute very similar to that of Nancy from Oliver!, with a big mouth and somewhat oversized notion of herself and her position. Ivy isn’t afraid of showing some leg to suggest sexual promiscuity, and Mamoulian’s direction doesn’t shy away from the risqué material (for 1931, that is – it’s rather tame by today’s standards); it gives the film a sense of shock, something the material suggested anyway but diverted into suggestive evocation thanks to convincing and esoteric direction. Truly, the film looks and feels dynamic, certainly containing a frisson missing from a lot of the era’s contemporary output.

Of course, much has been made of Frederic March’s stellar Oscar-winning performance as Jekyll and Hyde. Is it warranted? Yes sir: as Jekyll, March is chisel-jawed and upstanding, convincing without offering any underlying madness inherent in “mad scientists” and their ilk. Instead of the mad scientist motif, the story works in an addiction angle by making Hyde a creature Jekyll can’t resist, no matter how morally upright he pretends to be. The difference between the two men is stark, ably acted by March as he undergoes the horrific make-up design that accentuates his brow, gives him a pronounced top row of teeth (must have been a real bitch to work out how to enunciate properly with those in) and vulgar mannerisms – hissing, growling etc – that give Hyde an approximately ape-like, wolf-like visage. March’s work as Hyde isn’t so much the stretch you expect because he simply needs to behave like an ass the entire time, as he chokes Ivy to death following her exhorting Jekyll to protect her earlier in the film. It’s a tragic, awful encounter but strikingly performed (by Hopkins as well, who gives her all in the role as the poor prisoner of Hyde’s wrath). 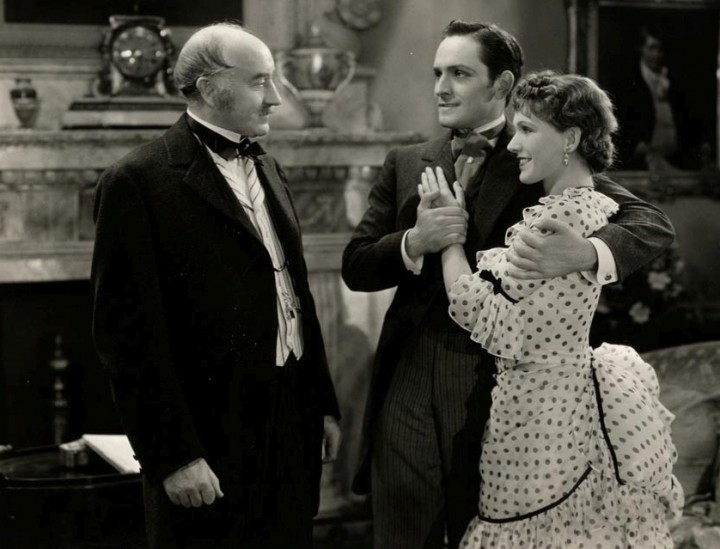 Less striking is the work of Rose Hobart, as poor Muriel Carew, Jekyll’s love-interest in the movie. Hobart is given little but 1-dimensional romantic tripe to spout as his intended, a superfluous role designed more as a workbench of Jekyll’s development as a character than anything maternal or influential in her own regard. Muriel’s father, the garrulous Danvers Carew, is at least antagonistic towards Jekyll enough to warrant some objection or protestation, and the wonderful Halliwell Hobbes provides a nice sparring partner to both his on-screen daughter and her fiancée. Holmes Herbert does a nice enough job as Jekyll’s doctoral confidante, Lanyon, providing a nice contrast between the slow descent into addictive hell and those forced to watch from the sidelines. There’s a nice parallel between Lanyon in this film, and Edward Van Sloan’s Dr Waldman in Frankenstein, in that they’re the “voice of reason” amid the madness, albeit unfortunately impotent against the raging tide.

Ultimately, Dr Jekyll & Mr Hyde (pronounced in this film Jee-kl, rather than Jek-l, which is the way I grew up delivering it) is a tremulously magnificent version of one of Horror’s great works of literature. Gothic in nature, the film’s startling visual effects and above-average prowess with cinematography, not to mention worthy leading performances from March and Hopkins, make this film’s iconic status indelible to the history of the medium. Violent, kinetic, tragic, operatic: there’s nothing amiss in this man-vs-himself fable of our inner evil lurking just below the surface.