Bumpy but in a good way.

Based loosely on RL Stein’s series of kids horror books of the same name, Goosebumps is a rumpus-tumpus adventure flick that harks back to Jumanji by way of Steven King and those cool 80’s classics like Neverending Story and Goonies. I admit to thinking the trailer for this I saw before The Force Awakens made the film look kinda goofy and stupid, the film itself is kinda goofy and stupid but somehow it all just sorta works well. Harmless B-movie fun with some terrific effects and a Golden Raspberry-worthy performance by Jack Black, Goosebumps is silly, indeterminate fun that lasts just as long as the film plays and not much beyond that. 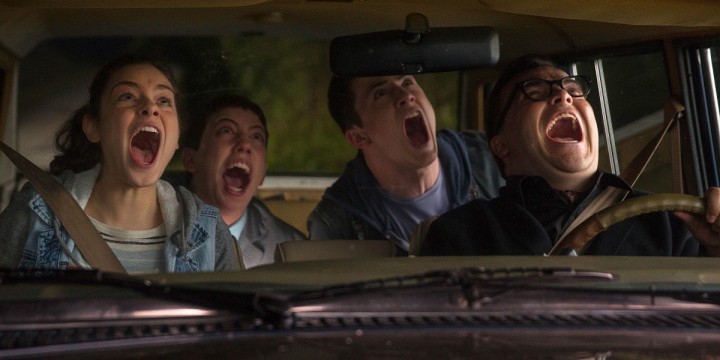 Zach Cooper (Dylan Minnette) and his mother (Amy Ryan) move to the small town of Madison, Delaware, following the death of his father a year earlier. Zach’s mother is the new deputy principal of the town’s high-school; Zach soon meets his mysterious next door neighbour, Hannah (Odeya Rush), and Hannah’s weird father Mr Shivers (Jack Black). When Zach begins to suspect that Shivers is keeping Hannah prisoner in her own home, he breaks in to try and rescue her, but inadvertently uncovers a dangerous secret – Shivers is actually horror author RL Stein, and he keeps manuscripts of his popular books under lock-and-key in his home, for if they are opened, they unleash the monsters he has spent his career writing about. Misadventure causes a number of the books to open, releasing, among other creatures, the Abominable Snowman, killer Garden Gnomes, and Slappy, a sadistic ventriloquist dummy with a laser focus on Stein. As the creatures unleash their wave of terror on Madison, and the students at the school shelter in the auditorium, it’s up to Hannah, Zach, Stein and Zach’s friend Champ (Ryan Lee) to find a way of getting all the monsters back into their books.

Goosebumps works on such a meta-level it’s slow-clap hilarious. Essentially, the film works as a weird fictional biography for RL Stein (the real version of whom appears late in the film in a nice little cameo) rather than an outright adaptation of one of his books. Jack Black plays a fictional Stein, who write the Goosebumps books as a way of dealing with being bullied as a child, before realising that his magical typewriter can actually bring his monstrous creations to life. The film burdens its lead actor Dylan Minnette with a disproportionate amount of angst early in the film – his torment over his father’s passing is intimated at the start but is quickly brushed aside in favour of spectacle and CG – and the performance by Black himself is one of the most skin-crawlingly bad “comedy” routines in cinema history, but there’s a glee to Goosebumps that both kids and appreciative adults will enjoy on a superficial level that can’t be overlooked. 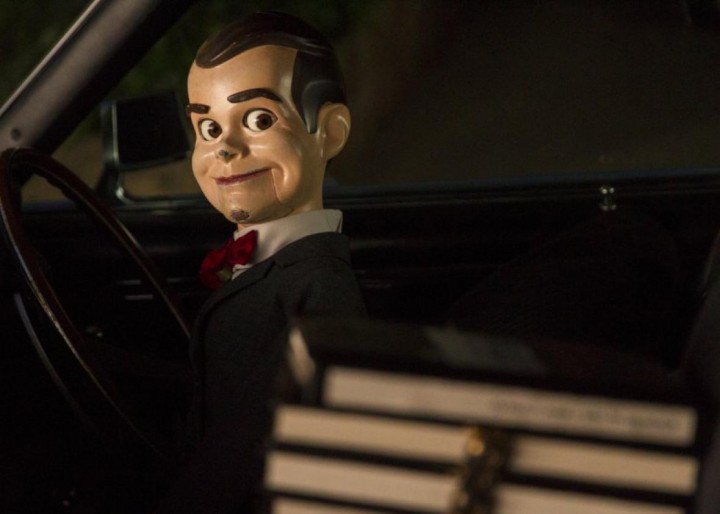 The film sees Jack Black reunite with his Gulliver’s Travels director Rob Letterman, working with a script by Darren Lemke, and the film’s sense of playful menace and hackneyed laugh-a-minute dialogue is both awful and hilarious. While the film is pitched at young teens (I guess) and the juvenile humour works on that level, adults may cringe at some of the rancid jokes, both verbal and slapstick, on offer here. Ryan Lee’s ill-named Champ provides the ironic, face-pulling sidekick comedy relief, and although the insistence and urgency of his performance began to wear thin through overuse, it’s a welcome relief compared to whatever the hell Jack Black was thinking with his work here.

Black’s RL Stein character has a buffoonish arrogance and garrulously opaque diffidence to it; while the younger characters are representative of modern kids today, Black’s performance goes well beyond what the film reasonably asks the audience to accommodate. There’s comedy elements to almost all the adults – Zach’s Aunt Lorraine, portrayed with real comedic timing by Jillian Bell, is another dull-witted caricature but it works for the film’s sense of playfulness, while a pair of dithering, imbecilic cops provoke more eye-rolls than belly-laughs – but Black is severely let down by a tic-laden character with almost zero redeeming interest for the audience. Black’s awful accent and weird enunciation make for a thoroughly squirm-inducing viewing every time he’s on the screen.

Blessedly, Back ain’t the central role, no matter how much the promotional material might disagree. Dylan Minnette and sorry, Odeya Rush, as the twin romantic leads in this escapist jaunt, are effortlessly watchable, and have a solid chemistry together than leapfrogs much of the film’s inherent silliness. Although their characters are let down by shoddy scripting in terms of character development, what threadbare elements they can work with offer at least a minimal sense of tangible realism to a film filled with CG monsters and plagiarised set-piece design.

Goosebumps apropos early scene involves Minnette and Rush having a romantic interlude inside an old amusement park; the film is analogous to a theme park in that once the monsters start to come out, the film goes for bigger, bigger and enormous visual experience – nothing is left in the tank by the end, a cacophonous gaggle of thematic cliches including an insidious doll, zombies (referred to as “ghouls” here, so as not to terrify the impressionable in the audience), gigantic animals in the form of a massive preying mantis, as well as werewolves and creepy clowns. Adults will appreciate the specific nods to films past – one of the characters even alludes to The Blob, which appropriates itself late in the movie when a giant gelatinous blob arrives to suck Stein to his doom – while kids will just laugh and chuckle at how silly it all is. Although it’s not creatively fresh, and merely restructures horror archetypes for its own amusement and glory-porn CG, everybody appears to still be having a good time so you just kinda let it slide and have fun. 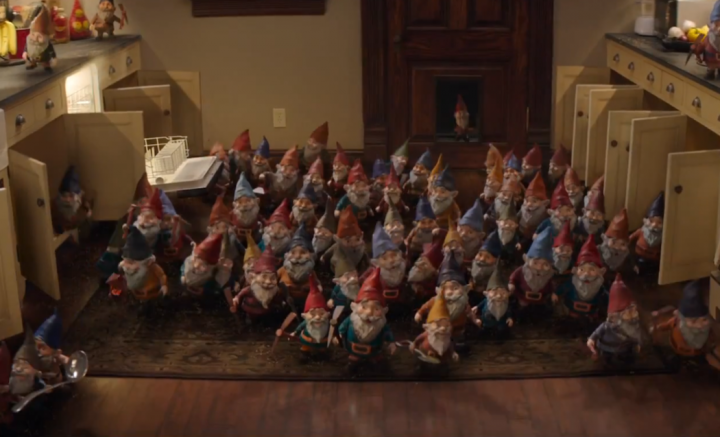 Letterman’s approach to directing action is… well, I’m not quite sure. The film’s key set-pieces of action include a terrific Gnome Attack inside Stein’s house, a blatant rip-off of Emmerich’s Godzilla as the giant Mantis chases our heroes through Madison’s streets, an attack by the Abominable Snowman inside a skating rink, and the predictable “last stand” motif as the students of the high-school barricade themselves inside the gymnasium, Dawn of The Dead style, while monsters try to access the facility. None of these scenes feel like they’re doing anything new (save for the Gnome attack scene, which is handled with considerable dexterity as the diminutive creatures attack en masse to threaten the lives of our heroes) and Letterman’s camerawork and editing is both clumsy and half-baked. Ratcheted frame-rates and poorly chosen hand-held shots mix with more traditional “Spielbergian Stateliness” and you get the sense that Letterman just hoped the production crew would get the stuff he needed to put things together in the editing room.

Goosebumps has just enough saving graces to make one overlook the film’s poorer aspects; it’s a breezy, frothy, occasionally scary but always energetic romp into the world of RL Stein’s successful literary world, and will entertain through sheer velocity rather than the manic performances of most of the cast. Jack Black is hideously miscast (or over-directed) in this, but the young leads and the gamut of recognisable monsters, coupled with some great visual effects and a sense of genuine jeopardy, make Goosebumps a nice little rollercoaster ride to jump on. Never a genuine classic, but still worth a look.