What do you get when you mix the Mexican afterlife, a love triangle, music, bullfighting, animal welfare and two gambling-addicted members of Central American mythological iconography? You get The Book Of Life, a film directed by Jorge Gutierrez and produced by Guillermo del Toro, set in ancient Mexico and featuring a steady stream of anglo-saxon voices giving life to this zany, well made, often startlingly animated movie.

Manolo (Diego Luna) and his best friend Joaquin (Channing Tatum) live in the Mexican town of San Angel, and both are infatuated with the same girl, the vivacious Maria (Zoe Saldana). Local spirits La Muerta (Kate del Castillo) and Xibalba (Ron Perlman), lovers who exist in the Mexican afterlife’s approximation of heaven and hell, have a wager, Xibulba wants to rule the Land Of The Remembered, instead of the less happy Land of The Forgotten, and so the pair bet who Maria will end up in love with. When it looks like Xibulba will lose, he uses secret magic to swing the odds in his favour; Manolo ends up dying, his soul travelling to the Land Of The Remembered, where he realises his fate is up to him and he desperately wants to get back to Maria.

As unfamiliar as I am with the Mexican religious lexicon, I’m gonna go out on a limb and suggest that at no point does The Candle Maker, who lives between the Land Of The Remembered and The Land of The Forgotten (voiced here by a vaguely reggae-sounding Ice Cube), look like some angelic gangsta in the descriptions of him anywhere. So what, I guess; this is a kids flick, part myth-building fable, part blisteringly animated cliché – The Book Of Life offers plentiful detail within the framework of its hugely accessible story, as well a gamut of cool for those willing to freeze-frame the DVD to notice some of the intricate design work going on here.

The Book Of Life does for Mexico’s Day of The Dead celebration what Shrek did for fairy stories. The film zips into its mythological underscoring almost without care – people die in this film, which is aimed at kids, but does so in a way that makes it seem a lot more fun that it probably will be in real life; the question of what happens to us after we die is one which has fascinated both the faithful and the faithless since humans skulked in caves and killed hairy elephants for food, and while you’d never want to use The Book Of Life as a religious teaching method, it at least goes a long way to offering alternative belief structures some credence to the kids in the room.

If I sound like some religious scoffer, please don’t think that. The Book Of Life is fun, it’s zany, clever, filled with jokes and sweet characters, some truly remarkable character design, and effortless charm. About the only real problem with the film is a point I touched on in the opening paragraph – for a film set in Mexico it features a swag of All White American voice talent in lead roles. As Joaquin, Channing Tatum is about as Mexican as I am, which is to say, not at all. Zoe Saldana, as Maria, does well as the focal point for both Manolo – a terrific Diego Luna – and Joaquin’s affections, while smaller roles to Christina Applegate, as a museum guide, and Ice Cube, the least Mexican actor of the film, as a thoroughly hip-hop Candle Maker, who offers exposition on exactly what the titular Book Of Life is, provide star power (I guess) to a film which would do well in Central America, but perhaps not so well everywhere else. Sharp-eared viewers will catch Machete’s Danny Trejo, as well as Cheech Marin, Placido Domingo and more in small supporting roles, while Ron Perlman provides a gravitas as Xibulba that is reminiscent of Jeremy Irons’ Scar, from The Lion King. 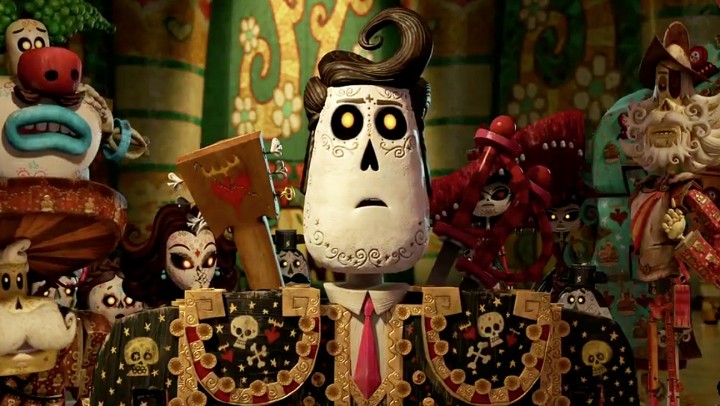 Dealing with the afterlife is a story point prone to put people off, particularly young people, and especially parents of kids younger than, say, seven or eight. The Book Of Life isn’t melancholy in a manner that makes the on-screen deaths of several major characters – who journey to the Land Of The Remembered like they’re going to the shops – but rather a extolling of life, of making the most of the time we have on this Earth, and if that’s a problem for parents to worry about telling their kids, then they’re doing it wrong. The film is filled with characters both large and small – a Mexican bandit, Chakal (Dan Navarro) is gigantic, while much of the populace of San Angel look like dwarves of some kind, and it’s all held together by a pop-culture glue, child-imbued bookend sequence set in “modern day”.

At times, The Book Of Life is a hard film to watch; in terms of story, it never once taxes the brain, but the eyes? Man oh man, this film is dense with design work. The film deserves your time in high definition – the characters look like stringless marionettes most of the time, and when characters enter the underworld they become approximated skeletal versions of themselves, and as an exercise in filling the frame with intricate, layered design, I doubt you’ll find a film better than this. At times garish, at times dark and foreboding, at times so eye-wateringly clustered with character and detail, the film is perfect for kids with attention deficit issues and folks with an appreciation for extravagance. If nothing else appeals about this film, watch it purely for the visuals, and you won’t be disappointed.

The Book Of Life is an above average animated film which gives kids a glimpse into a world I’m doubtful many outside America would be appreciative of. I know it’s currently the film de jour for my daughter, who happily hums the modern pop tunes (like Moulin Rouge, some current musical numbers are absorbed into the proceedings) and pretends her Lego all dies so they can go to the Land of The Remembered. Regardless of your appreciation for cultural heritage, The Book Of Life is well worth a look as a zippy, fun, exceptionally well animated adventure in love and life.