Hellraiser will always have a piece of my cinematic soul. Let me explain: it was the first genuine horror film I ever really watched, which was something considering my fairly innocent experience with cinema to that point. Trouble with being isolated in rural Australia, I guess; Hellraiser was what me and my friends called a “top shelf” video, that was, it was usually positioned on the video rental store’s top shelf, alongside the porn and wildlife documentaries. Coming with a hard R-rating, the film featured male nudity and graphic, bloody body dismemberments (hell, one appears in the first scene!) and demonic representation that, for a kid my age to appreciate beyond simple titillation and juvenile excitement, was a little beyond my understanding. I always look back on that initial late-night viewing with fondness, because it represented my first foray into a love of cinema at its purest, most  brutal, visceral best. 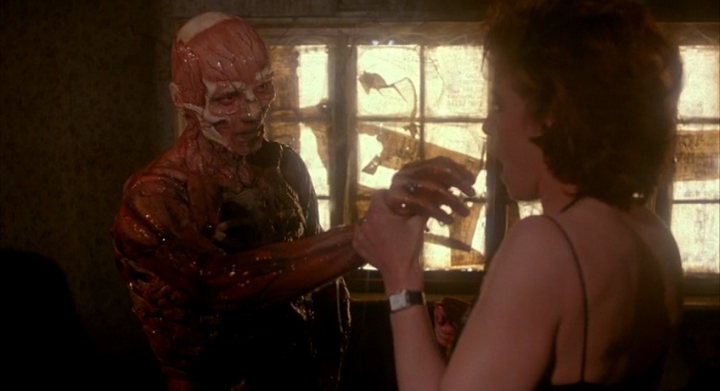 How does Hellraiser of 1987 stack up today, though? Hindsight and reliving past glories aside, Hellraiser is a product of its time and, sadly, it shows. For a film of such distinguished visual strength, it’s almost entirely set within the confines of a single house, lurking to exteriors only occasionally. Kirsty (Ashley Laurence) arrives at the house her father, Larry (Andrew Robinson) and stepmother Julia (Clare Higgins) have moved into; the former childhood home of Larry and his brother Frank (Sean Chapman), the house hides a ghastly secret. Frank, looking for extra sensation in his hedonistic desires, opened a mysterious box given to him by a trader, only to unleash the forces of a race of creatures known as Cenobites, led by Pinhead (Doug Bradley). Frank is ripped apart, but his living corpse is discovered by Julia in the attic – Julia and Frank had a brief but passionate affair prior to her marriage to Larry – and Frank needs blood to rebuild his body to live again. Julia, meeting strange men in bars, and taking them home so that Frank can feed on their bodily fluids, becomes a “black widow” of sorts, unbeknownst to the hapless Larry. When Kirsty discovers Julia’s secret, she inadvertently becomes involved in a horror show unlike any the world has seen before.

Hellraiser is a unique beast, particularly because the film’s iconic villain – Pinhead – isn’t really in it. Marketed around his instantly awesome visage, the film spends the vast majority of its time dealing with Julia and Frank, the latter of whom spends his time mainly as a watery, effluvial corpse up in the attic, waiting to feed off the bodies of the men Julia brings home. It’s testament to the staying power of this franchise that Pinhead’s minimal involvement in the original film had such an impact it warranted revisiting more than once. No, Hellraiser’s real selling point is its startling practical effects, most of which revolve around the blood and gore effects Barker utilises throughout the movie. The film is a genuine horror show, a legitimate sensory gore-fest that delivers some truly remarkable makeup and effects work (and, I’ll be honest, some that’s pretty shoddy too), but it’s undercut with some very average acting and a restrained, low-budget sensibility. 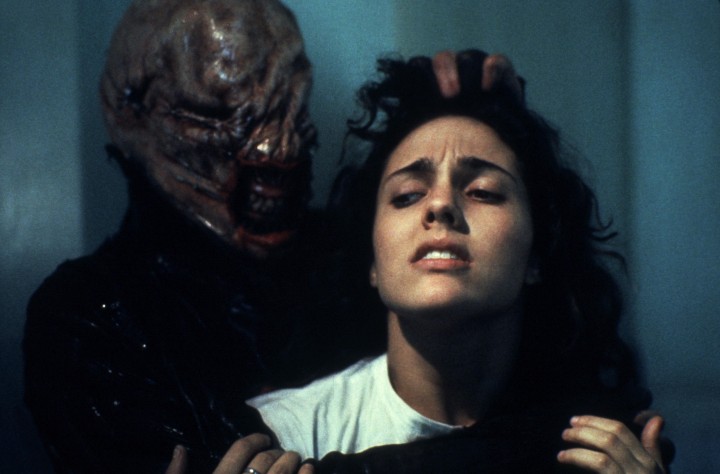 The quartet of performers Barker has assembled aren’t great actors. It’s a shame, because had they been, the material is strong enough to hold up with quality performances: screen newcomer Ashley Laurence is pretty to look at, services as the film’s “innocent” character of virginal standing, and gives the part the requisite looks of shock, horror and anguish, but can’t act her way out of a paper bag, the poor thing. Clare Higgins, in the pivotal role of Julia, is much the same; overacting is her trump card, and stuck with an acutely 80’s fashion sense (the hair, oh God the hair!) that is laughably bad, Higgins is lumbered with a sweaty, confused – nay, confusing – character with limited depth and even scarcer motivation. Sean Chapman, who spends most of the film as a slowly re-compositing corpse (the effects of which are a true highlight in the film), also overacts when he’s not guzzling blood and plasma into his face, a wooden, stagey, high-school-ish style that is hard to bear the longer the film winds on. Andrew Robinson’s performance as Larry, poor hapless Larry, is workmanlike but not even he can make Barker’s creaky dialogue and ill-timed sense of the dramatic work like it should.

Nope, you’re here for the gore – that’s what the box says you’ll get, and Hellraiser delivers on that count. The practical effects are awesome, from the rotting corpses to the animated “birth” of a skeletal Frank early in the film, to the various blood spurts and brutal murders committed by Julia with a hammer, to the body-rending hooks used by the Cenobites to tear Frank asunder; this is a film that delights in tormented, depraved horror and gore, and although the blood is far too red to be realistic, the rest of the film’s tearing, sizzling prosthetics and model work is superb. 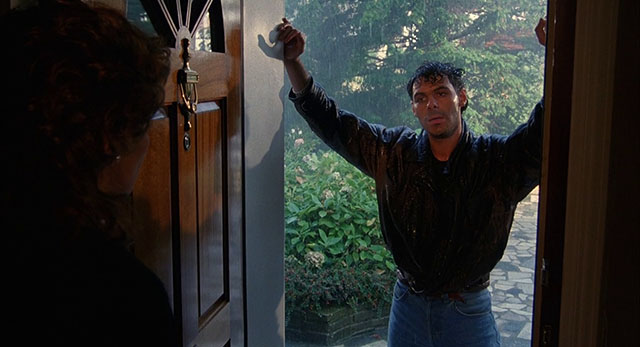 Barker is a man of singular vision, and his sense of style in iconography is truly remarkable. Hellraiser was his first film as director – he’d written horror film screenplays before, but this was his time to shine behind the camera following disappointment with how his work had been handled previously – and at its most basic, the story is a strong one filled with subtext and interesting concepts. The idea of the Cenobites is a captivating one, their mythology rooted in the idea of pain and pleasure intermingling (masochism being a relatively new concept in the 80’s, I wager) and while the film doesn’t really go into detail, it’s enough to dwell in the mind long after the film concludes. The design of the Cenobites, something my childhood self figured was achieved by using people who were actually disfigured in some manner, are effectively creepy for their simplicity and perfect form of agony – skin peeled, blood dripping, hooks and nails in every orifice, shredded flesh: they’re a nightmarish vision indeed – and it’s easy to see why they became a staple of the genre. Doug Bradley’s deep-toned portrayal of Pinhead, the leader of the Cenobites, is ferocious and magnificent.

It’s easy to see why Hellraiser became the cult classic I remember it as. Filled with memorable effects, monsters and ideas, for a late-80’s horror film Barker achieved a monumental feat of giving the film a real energy and sense of style. Although the performances aren’t that great, the premise behind the film and the execution of the effects warrant considerable attention, and it’s for those two reasons I’m scoring the film as high as I am.