It’s a fair statement to suggest that the last really, truly great film Robert DeNiro appeared in was Ronin, back in 1998. While there have been a few mild successes in the years since – Meet The Parents, which gave way to the truly awful Fockers, and Stardust – the majority of DeNiro’s recent career has been spiralling, or flat out colliding, into the sewerage. A once legendary actor has sullied his career appearing in some of the most horrific cinematic dreck to grace the big screen over the last twenty years; surprisingly, The Intern isn’t among them, and actually finds DeNiro in good form opposite Anne Hathaway in what must surely be the most charming comedic enterprise he’s engaged in thus far. 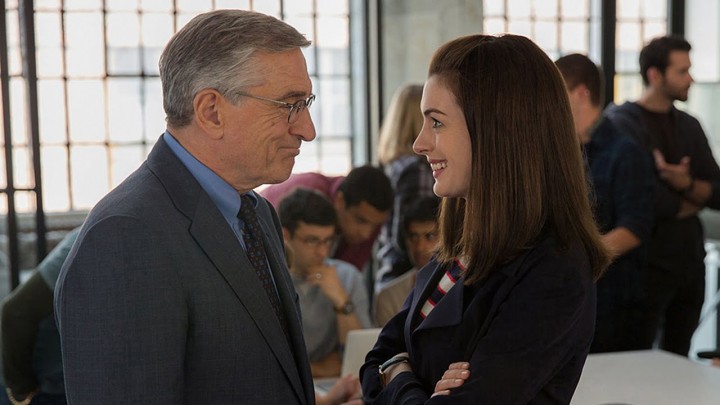 DeNiro plays Ben Whittaker, a retired 70-year-old widower who finds his life at a crossroads; bored by being retired, he looks for a way to return to a meaningful lifestyle, so applies for an internship at a local online clothing distributor, run by CEO Jules Ostin (Hathaway). Initially, Jules can’t get her head around Ben’s age and think he might not be a good fit for the company, but as Ben befriends others within the office, she comes to realise his value, particularly in a high-stress, high impact job, and suddenly can’t manage without him.

The Intern is a sweet film. Genteel, might be the best word for it, really. As an “odd couple” film pairing DeNiro and Hathaway in a flipped out boss-employee relationship, The Intern never really raises its voice beyond a dull chatter; a largely pedestrian narrative interspersed with gabble-talk and a meandering sense of characterisation. The Intern works as a fairly benign allegory on age and experience versus youth and energy; much is made of Ben’s age, until folks start to figure he’s actually really rather useful as an employee, and while it does trawl through infidelity and modern expectations of marriage – the film deviates into some turgid territory in its third act – you get the sense that the heart of this film is so out on the sleeves of all involved it’s infectious. 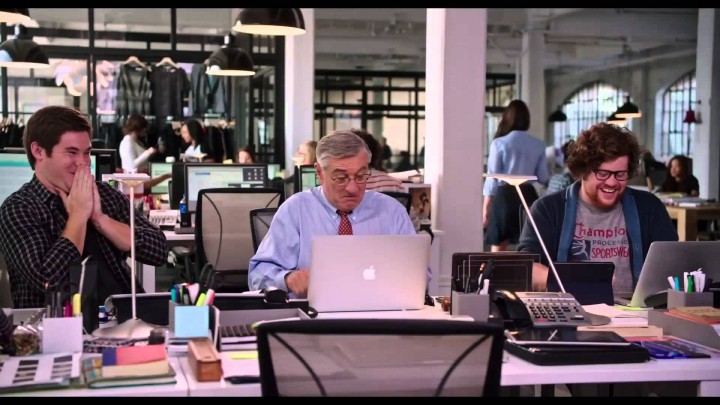 DeNiro’s performance isn’t fancy, isn’t indelible, and it isn’t a stretch for him by any means; what it is is safe but assured, as if the man has finally settled into his role as an elder statesman of the silver screen – he’s a silver fox, that man, and while nobody will remember Ben Whittaker as one of Bob’s great roles, it’s more relaxed and confident than I’ve seen in him in years. Anne Hathaway obviously wanted a character with plenty of internal torment, so director Nancy Meyers, who wrote the screenplay, gives her plenty of angst to deal with in the form of an unfaithful husband while her company is trying to transition to a new CEO of her choosing. Hathaway gets her obligatory moment of teary, blithering emotional diarrhoea, and accomplishes more with a one-note role than many of her contemporaries could manage in their entire careers.

It’s largely because of this added emotional wrangling that the film runs some two hours, about thrity minutes longer than really needed for a film working on the fluffy end of the spectrum. It opens with a grab-bag of pithy observations about what youngsters think of today’s older, Facebook-confused set, most of which is reverse engineered to make the kids look like idiots and DeNiro look positively angelic by comparison. It closes with some weird marital conniption that feels like it might have come from a second-hand idea Meyers had for a different film, shoehorned unconvincingly into this one.

But both DeNiro and Hathaway give the film a quality of chemistry that works well, overcoming the cumbersome “drama” in what might have been a largely playful, energetic waltz through life’s obscurity. Meyer’s, best known as the director of What Women Want, The Holiday and It’s Complicated, brings a real sense of camaraderie to the film, a sense that even in this hurly-burly world there’s still time for the older generation to make their mark. Perhaps the references to age in her recent films, particularly It’s Complicated and Something’s Gotta Give, are something of a continuing theme in Meyers’ work, as if personally unwilling to cave to the younger generation and ensuring older viewers have something to hope for – perhaps fantasize about – as well.

The Intern is a delightfully wry, entertaining film that finds DeNiro in better form than he has been in years, and accomplishes all the audience could possibly hope for in light of the sugary premise. While it outstays its welcome towards the end with a completely unnecessary tangent into marital infidelity, The Intern’s charming nature and beautific representation of hip-modern entrepreneurial endeavour make for funny, fun viewing.

2 thoughts on “Movie Review – Intern, The”