Steve Jobs died a while back. Since then, we’ve had plentiful cinematic and televisual documentary productions seeking to give audiences enamoured with Apple a glimpse into the life of a man many perceived as a technological genius and a marketing megastar. Those stalwart Apple defenders brave enough to watch acting luminary Ashton Kutcher’s on-point portrayal of Jobs, followed by Alex Gibney’s dissertation on Jobs’ faults and corruption, will find their cup brimmeth, and runneth over, as Trainspotting director Danny Boyle tackles an Aaron Sorkin screenplay attempting to semi-fictionalise Jobs’ as a driven perfectionist seemingly willing to trample anyone close to him to achieve his ends. Steve Jobs wasn’t a pleasant man – that much is certain of almost any entrepreneur purely at a business level – and the film which bears his name, while almost worshipful of him, entangles itself on the platform of Apple and, unfortunately, hits a few sour notes. 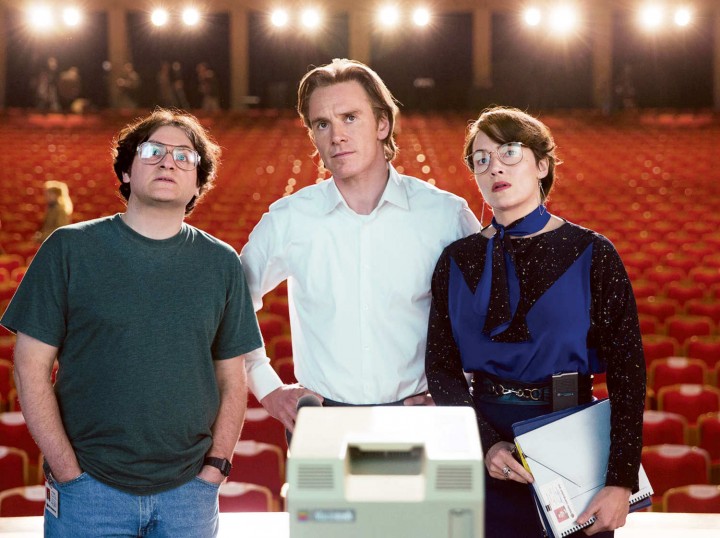 It’s 1984: the launch of the Apple Mac, and Steve Jobs (Fassbender) is backstage with Joanna Hoffman (Winslet), his marketing executive for Apple, going over the final details of the event. Trouble looms, however, when the programmers, led by Andy Hertzfeld (Michael Stuhlbarg) can’t get the device to say “Hello”. Berating everyone around him as incompetent, generally being a bully, Jobs is them confronted with a former girlfriend, Chrisann Brennan (Katherine Waterston) and Jobs’ daughter, Lisa (Makenzie Ross). We cut to 1988, and the launch of Jobs’ next product, for his new company NEXT, following his dismissal from Apple earlier that year. Former ally John Sculley (Jeff Bridges), a one-time CEO of Pepsi and the CEO of Apple during Jobs’ downfall, approaches him asking him to set the record straight over their falling out, as he has been portrayed in a negative light by all within the media and the industry. Jobs reveals to Joanna that he expects NEXT’s “black cube” device to fail, but that Apple, who are struggling, will but his company to obtain the right to the operating system, which they desperately need. Finally, the film moves to 1988, with Jobs back at Apple following the firing of Sculley, and the launch of the iMac, the computer which would revolutionise the industry and eventually lead Apple into iPods, iPhones and iPads. Here we learn that Steve has had a falling out with Lisa (now portrayed by Perla Haney-Jardine), as well as former Apple alum Steve Wozniak (Seth Rogen), and Lisa’s mother.

Biographical pictures, and I’m generalising here, tend to follow a fairly standard archaeological foundation: take a specific identity, in this case Steve Jobs, and recreate several of the more important (read: public) moments in that person’s life, followed by some tragic or compelling background subplot, throw some classy actors at it, and see if it works. Steve Jobs the film doesn’t quite work like that; if anything, it’s the very essence of what made Jobs tick, in that he wasn’t just like everyone else, or, for that matter, what people expected him to be like. Rather, Boyle, together with the verbal mastery of Aaron Sorkin’s brilliantly constructed screenplay, have crafted a film that doesn’t focus on the “big” moments in Jobs’ life, but the smaller, more personal moments around the big ones.

Given it’s a Sorkin script, the film is incredibly verbose; a stream-of-conciousness remark on Jobs’ detestable behaviour towards people who should be his friends, as well as the drive of a man trying to “change the world”, it’s an incredibly insightful portrayal of a man regarded as something of a genius in the world of personal communication. 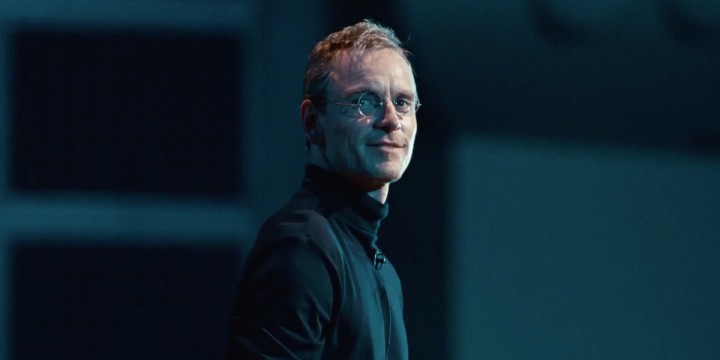 Indeed, Jobs’ influence on the world cannot be overstated, but I think the film’s attempt to contrast public opinion with personal reality doesn’t quite work so well. Sure, Jobs could be a bit of an ass, and no doubt treated people like cattle rather than human beings, but he relied on them: a key moment between Fassbender’s Jobs and Rogen’s Wozniak is pointed indeed, with the latter asking exactly what the former did other than corral the right people who put together his amazing toys? What did Steve bring to the table? The response is wonderful.

Fassbender is magnificent as Jobs. Setting aside their physical differences for a moment, an actor of Fassbender’s calibre astonishes with a nuanced, frustrated, towering portrayal of one of the 21st Century’s most influential men. It cannot be an easy task, bringing to life a man only recently passed, and to whom so many have some level of emotional attachment, but Fassbender’s sense of drive and comittment to the role is unwavering, and the film is stronger for it. He’s abetted by the wonderful Kate Winslet, who absolutely vanishes into the role of Joanna, one of cinemas most thankless characters considering the way she’s treated by Jobs throughout. Winslet provides Fassbender’s Jobs with a moral compass, a matriarchal subservience to which Jobs rails and respects, even if in unequal turns.

The film’s core focus is, when you get past the computer-speak and belligerent Jobs’ hammering people around him, is his relationship with Lisa, the girl he initially claimed wasn’t his daughter (even though paternity tests said she was), and Lisa’s mother, portrayed by a heartbreakingly good Katherine Waterston. It’s apparent that both Jobs and Chrisann despise each other (although exactly why isn’t the point of the film), but exist in an argumentative relationship of sorts purely out of affection for their daughter. Frankly, I found Waterston’s few scenes with Fassbender to be the highlights of the film, a breaking down of Jobs’ inhumane behaviour towards them both that explores the man’s failures as a parent in a manner that’s both profoundly moving, and consistently aggravating. 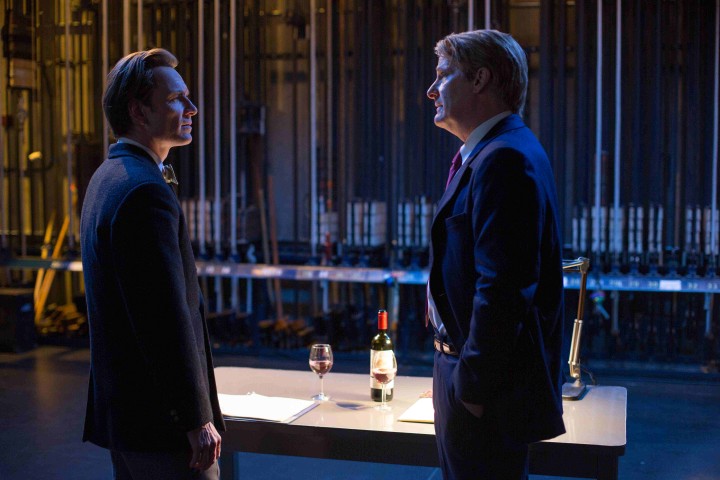 It’s in this aspect I think Sorkin’s script fails the audience; at no point do we ever see Jobs soften, never do we see him concede wrongdoing to the point of personal growth. I liken this film version of Jobs to a Sheldon Cooper-esque sociopath on steroids; he belittles and berates everyone around him, demands perfection and solution in crazy timeframes, and cannot seem to appreciate how, or why, people despise him. The film simply runs over Jobs emotional complexity in favour of a mostly unlikeable characterisation that, according to the people who knew him best, isn’t exactly accurate. There’s no respite from Jobs unrelenting badgering, to his constant frustration with what he perceives as human stupidity, and although the film catalyses this behaviour through his reluctance to cede control of his inventions, it does become tiresome towards the end. We never see Jobs open up, reveal his true self (at least in terms of this film) and that remains the most frustrating thing about Steve Jobs, for me.

In any case, Danny Boyle has done a remarkably assured job bringing this film to the screen. As a period piece, there’s so much wonderful production design going on here your eye is constantly drawn to the background or the detail in the sets, as garish 80’s clothing and that fabulously retro technology design reminds us of where we are today, with our sleek, speedy, gorgeous computer powers. Boyle handles the dialoge with aplomb, eschewing his more traditional frenzy of editing for a more restrained, naturalistic and sombre tone. Sure, there’s plenty of Boyle’s favourite screen tricks (projected imagery across the backdrops, etc etc) but they’re not overt, which is pleasing. Boyle’s camera follows Jobs constantly – he’s the centerpiece of the film, and is in every single scene – as characters bob in and out of the narrative in that typically Sorkin-esque manner; there’s a lot of frantic “walking and talking” tracking shots here, but so to is a sense of Boyle just letting the actors tell the story, rather than hysterical direction.

Steve Jobs the man has become mythologised in the years since his passing, and will no doubt continue to be long after we’re all gone from this Earth. He’s an American landmark, the JD Rockefeller of the 21st Century, and it’s only natural for film-makers to want to tap into his story in trying to understand him away from product launches and slick managed-media interviews. Steve Jobs the film is a time-capsule of interesting intent, an intent to not sully the name of Jobs but to try and draw out some truth we’re unaware of; I think Sorkin’s screenplay is dynamite, and the acting performances across the board are wonderful (especially Fassbender and Winslet, but also Seth Rogen), while Danny Boyle’s direction is as resolutely low-key as I’ve ever seen him. Although I lament the lack of a humanising factor in Steve Jobs, the film is worthwhile if only for some dynamite acting and brilliant writing.