It’s been a long, hard slog for Ryan Reynolds, an actor who has wanted desperately to headline his own successful comic-book movie for ages now. After appearing in the third Blade movie, an abortive version of Deadpool in the abominable X-Men Origins: Wolverine, and the desperately uneven Green Lantern, all hope for Reynolds to have his own successful franchise seemed distant at best, absent at worst. Given the treatment of Deadpool in the X-Men movie, in which the “merc with a mouth” had his mouth sewn shut, Reynolds felt he owed it to the character and to audiences to bring the role back to the level it deserved, and so after much fan love for leaked test footage several years ago, we now have an R-rated Marvel movie (from Fox, no less, who gave us the horrendous Fantastic Four movie last year) that not only course corrects Reynolds’ career as an on-screen comic-book identity, but blows a lungful of gratuitously fun air into the gluttonous superhero genre. 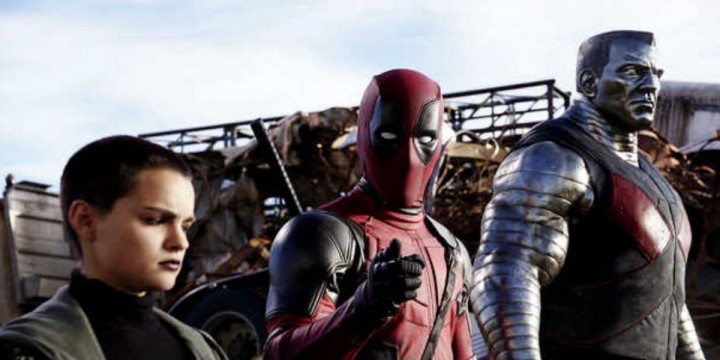 Off the back of one of the most astonishingly brazen, hilarious and encompassing marketing campaigns of all time, Deadpool had a bar raised so high you kinda worried the final product might not live up to it. Expectation can often ruin a film, no matter how good it might be, and the barrage of cross-promotions, roadside billboards, inter-franchise parody and hilariously thematic Deadpool-ish humour littering the pop-culture landscape brought with it a hype for Deadpool that resulted in a record-breaking box-office début for February. People had virtually no option but to see this film, given its market saturation: so the question remains – now that you’ve seen it, is it any good?

Let’s be blunt: Deadpool is not a movie for kids. Decidedly vulgar, fuelled by a non-stop orgy of one-liners, non-sequitors and persistent fourth-wall-smashing action and dialogue, Deadpool’s meta-textual wit and hyperbolic violence is most assuredly aimed squarely at adults. Ryan Reynolds essays the sarcastic mercenary as if he was born to the role – one suspects he was. I know Reynolds has had his detractors through the years, but I’ve never been one of them; films such as Buried and The Voices, to name only two, have provided him with a platform to showcase not only an intensity, but a gravitas and emotional depth lacking in “comedy” performers of similar ilk. You’d never see Dane Cook carrying off this role, not in a bazillion years.

Reynolds plays Wade Wilson, a thug-for-hire who falls head-over for a beautiful stripper-slash-prostitute named Vanessa (the glorious Morena Baccarin – Firefly), before learning he has inoperable and exceptionally advanced cancer. Staring down death, Wilson is given a lifeline by a mysterious man he meets at his local bar, who offers him the chance to gain superpowers which will save his life. Wilson agrees (eventually), but the operation, run by Francis “Ajax” Freeman (Ed Skrein – The Transporter Refueled) is not only torturous, it also turns him into something resembling a pox-ridden scrotum. The trade-off, however, is that his body can heal itself from virtually any injury, effectively granting Wilson a form of immortality. Wilson seeks revenge on Ajax for ruining his relationship with Vanessa, who he refuses to see again for fear of ruining her memory of him – hunting him down by going after his associates, Wilson assumes the moniker “Deadpool”. 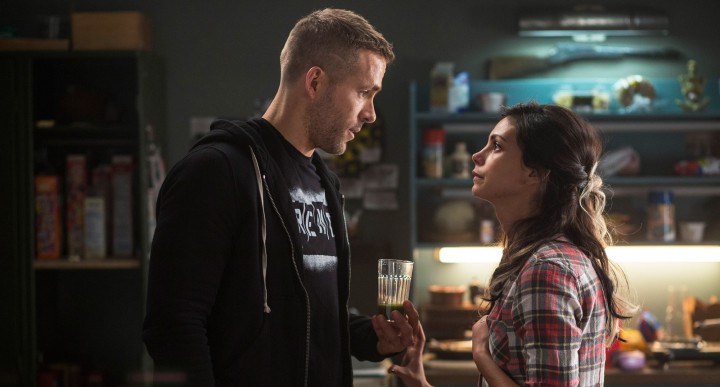 Deadpool is a film of two kinds. At first, it’s a romantic comedy. Tough-guy meets whore with a heart-of-gold, they fall in love, he gets cancer, angst angst angst. Finds a possible cure, takes option to use it, discovers it’s a poisoned chalice and then, because a hot chick like that can’t f@ck an ugly guy like him any more, he stays away from her. Oh, the tragedy. Second, it’s a revenge film: armed with weapons and a body capable of regenerating from any injury,  the main dude uses his wit and physical skills to go after the man who turned him into a human-shaped prune, slashing and hacking his way through the criminal underworld to achieve his aim. Now, normally these two genres would never mix well, and certainly not in a film armed to the teeth with trying to include elements from Fox’s successful X-Men franchise, but Deadpool’s rapier-like humour and deft, non-stop bludgeoning of the audience with slam-bang action sequences, it all just works.

Deadpool brazenly goes where the Marvel Cinematic Universe wouldn’t dare: copious cursing, sex scenes and references to anal penetration, eviscerations, beheadings and all manner of human carnage make this film as far from Tony Stark’s PC-friendly, PG-rated Iron Man as you can get. Written by Rhett Reese and Paul Wernick, the film slides so many laughs into the fray you almost miss half because you’re chortling so often. Deadpool’s comic-book modus operandi is continually breaking the fourth wall – the character knows he’s a fictional character, and plays up to that fact, and the film-makers have obviously decided not to bother changing much in the transition to live-action big-screen carnage. This film is just full-bore crazy, a bloody, hilarious, bloody hilarious action zinger that has legitimate heft in the emotional stakes at the same time as it’s pan-handling the comedic tropes via Wilson’s pop-culture-savvy narration. My favourite geek-part? The tip-of-the-hate to Wolverine, Hugh Jackman.

Had Deadpool simply been an “assassin for hire” film, I doubt it would have worked so well. It’s okay to have a smart-assed killer like Wade Wilson slaying thugs and bad-guys every other minute, but without an emotional footing for the character the film would simply be an empty, withering husk. Giving Wilson a grounding with his love-story in Vanessa, and making the film about retribution for their relationship, allows the action to manifest as a mirror for that subplot. The fact Reynolds and Baccarin have such terrific screen chemistry only adds to the feeling of sorrow at Wilson’s choices throughout the film. Whereas many action films are derived from their narrative hook, Deadpool comes from a place of character development and invested interest in relationships.

Speaking of relationships, it’s fun to see TJ Miller in a role I haven’t outright loathed him in. A far cry from being killed in a Transformers movie, Miller plays Weasel, the barkeep at Wilson’s local tavern, and a constant companion to the seedier aspects of Wilson’s lifestyle. Watching Reynolds and Miller riff the light fantastic dialogue is a pleasure here, restrained as they are by director Tim Miller’s taut editorial oversight. Also of note is Leslie Uggams, who plays Wilson’s blind room-mate after he becomes Deadpool – she’s as sharp-tongued as he is in many ways, and looks vaguely like Star Trek’s Nichelle Nichols – and acts as a secondary support character who “asks no questions, tells no lies” when it comes to Wilson’s activities. Also braving the onslaught of Deadpool’s jabs and jibes are the two X-Men to feature in this film, Colossus (voice of Stefan Capicic, motion-capture of Andre Tricoteux and Greg LaSalle, among others) and the amazingly named Negasonic Teenage Warhead (Brianna Hildebrand), who continually refer to Wilson’s possible recruitment into the mutant fold under Professor X’s auspices. Both come to the fore during Deadpool’s climactic heli-carrier set finale, and sidestepping Colossus’ obvious uselessness in combat for a moment, I’m hoping Warhead’s fanbase will head upwards and promote her to further films in future. 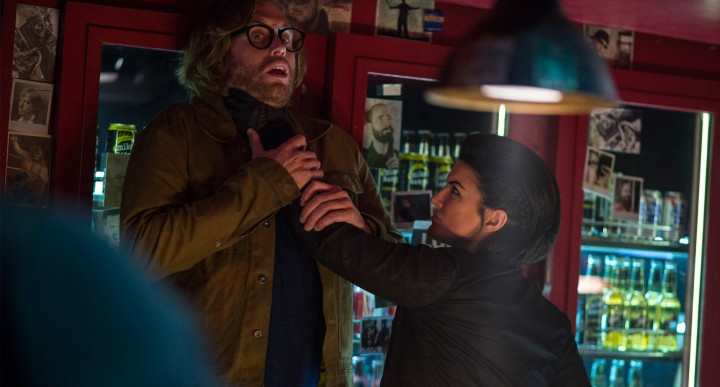 Filling the “villain” roster here is Ed Skrein, displaying infinitely more personality than he did in that rancid Transporter reboot, as Ajax, whose power set doesn’t feel that exploited by the writers as much as simply being there for the sake of it. Ajax’s right-hand woman is Angel Dust, played by Gina Carano, a former MMA fighter trying to carve a niche into Hollywood’s action film market. Carano isn’t an actress, as we’ve established in films like Haywire, In The Blood, and the sixth Fast & Furious movie, and bless her she’s given barely any lines of dialogue to say. Instead, she merely has to look and act tough, which she does I guess, and her brutal knock-down fight with Colossus is one for the ages, so for maximising the payoff without ruining the film, kudos to Miller and the producers. A bit part to eternally creepy Jed Rees, as a recruiter for Ajax’s Weapon X programme, is nice to see, too.

It should be noted for the record that Tim Miller’s direction here is near-flawless. For his directing début, Miller gives the film an adrenalized punch-up aesthetic of smash-n-grab angles and framing, sizzling editing and a sound mix that is as potent and attention-seeking as Wilson’s glib one-liners. 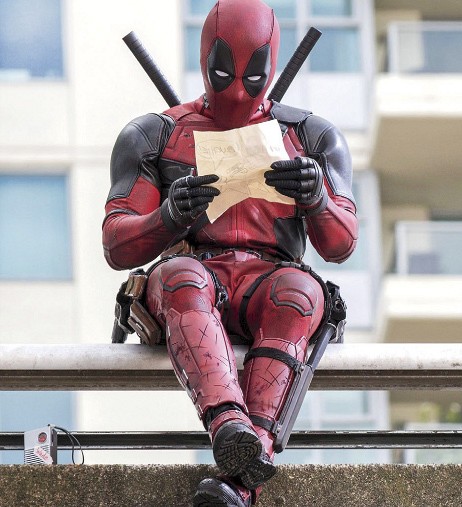 The film’s bravura opening freeway chase attack, in which Deadpool takes on a cohort of Ajax’s thugs, is instantly classic, from its body-tearing physicality to its Bourne Supremacy visceral-ness. The film’s solidly brutal kill-shots and occasionally gory dynamism make for pungent immediacy that a PG film couldn’t hope to accommodate – folks who think there should be a kid-friendly cut of this film will find a film that runs about ten minutes long, if we’re honest – and it’s a wild ride indeed. In saying that, though, a lot of the film’s more violent moments occur off-screen; headshots and limbs being severed are hinted at and glimpsed briefly, for the most part, and even the really gory stuff (the body slamming into the overhead freeway sign, which was alluded to in the film’s trailers, is but a flash of collision without real graphic gore) is primarily achieved through genius sound design and razor-sharp editing.

In saying that, there’s plenty of cringe-inducing moments to keep audiences glued to the screen. This is a film for adults, make no mistake, and is a genuinely funny, often moving story of personal redemption told through a prism of violence and ironic humour. Tim Miller’s direction is to be applauded, alongside Ryan Reynolds’ career-making turn as the title character. Although Deadpool was developmentally fisted up the ass in that awful X-Men Origins movie, the character’s redemption comes in the form of this kinetic, violent, exploitative riot of bullets and laughs. Stick through the closing credits for a couple of bonus tags, and wallow in the sheer vitupernouness of Deadpool.

Reviews of Deadpool by our friends!!

Dan The Man gave it the full thumbs-up!

Peggy suggests you may be rolling in the aisles with laughter…

Linus at The Cinematic Katzenjammer gave it a glowing review…

Hammy thought it was a bit hit-and-miss…

The Craggus loved it.

Grog thinks they knocked it out of the park…

Chris as Cynical Film Reviews didn’t think much of it….