2015 marked a rare year for Pixar, the studio behind films such as Toy Story, Finding Nemo and Monsters Inc. For the first time, the studio delivered two feature films, Inside Out and The Good Dinosaur. One film transported us into the inner workings of the mind of a young girl. The other – this film – took us to an alternative Earth where dinosaurs weren’t destroyed by a cosmic cataclysm, allowing them to live side-by-side with primitive man. Whereas Inside Out was a decidedly adult film from a studio who basically make clever kids films, The Good Dinosaur sees them return to the anthropomorphic character designs which have stood them the test of time since 1995. Appropriating American dustbowl thematics within a buddy-road-trip film, in which the dino’s do the talkin’, The Good Dinosaur’s good-natured character rhythms and fairly bog-standard moral beats don’t really give the film a propellant to match its fellow 2015 release, yet in its own sweet way manages to still retain the Pixar charm enough to elevate it above much of its competition. 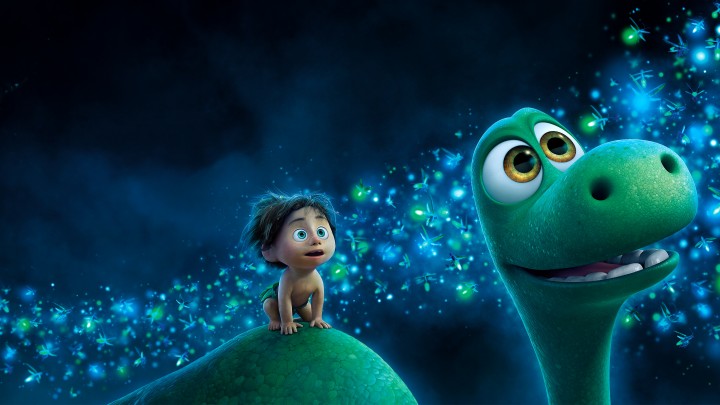 Arlo (voice of Raymond Ochoa, a veteran child voice and television actor) is a young Apatasaurus living with his father (Jeffrey Wright), mother (Frances McDormand) and siblings (Marcus Scribner and Maleah Padilla), early in Earth’s development. The meteor which would have destroyed the dinosaurs never struck, allowing both dinosaur and human species to co-exist – although not peacefully. Arlo is a timid, skittish runt of the family, who struggles to “make his mark” on the family food silo by doing something bigger than himself. So when his father is killed in a raging river torrent, as a direct result of Arlo being unwilling to kill “a critter” – human child Spot (Jack Bright) – the pair engage in a tit-for-tat series of journeys across the landscape for Arlo to find his way home.

If there’s a way to describe the story arc of The Good Dinosaur, it might well be “cute”. Arlo is an inherently marketable character, the kind of lunchbox-and-happy-meal design made for easy Chinese replication and doe-eyed fascination by the inevitably young demographic. Spot, the human child, is a wild-haired urchin who grunts, growls and Tarzan’s his way though this misadventure, spider-like agility and antithesis of Arlo’s timidity providing contrast between the unlikely pair. Spot’s puppy-like behaviour is a reversal-of-character archetype we’ve seen before – where the animals are the intelligent beings and humans are less so – and while this may entertain the littlies watching this, for adult viewers it’ll be a little too simplistic. Unlike Inside Out’s darker involvement with its central characters, The Good Dinosaur vaults depth for clever set-pieces and shallow, often derivative story beats.

That’s not to say this film isn’t without reward, because it’s a Pixar film and you go into it knowing you’ll at least get quality writing and animation. While I’d say the former is possibly the weakest in a Pixar production outside of Cars 2, the latter – the animation – is astonishing. Truly, remarkably, astonishing. Arlo and Spot’s relatively simplistic designs and caricatures don’t always sit comfortably within The Good Dinosaur’s utterly mesmerising photo-realistic landscapes, and that’s part of the film’s key issue. It’s a problem of “meshing”: the design and animation of the primitive landscapes on prehistoric Earth are just spectacular – I don’t think I’ve seen anything so beautiful in my life, particularly Pixar’s attention to water effects, which look indistinguishable from reality – that the less detailed character design pops out in a manner that actually works against the movie. One day maybe we’ll see Pixar stretch itself to putting photo-realistic characters within an equally amazing setting and deliver a film that looks like it all fits together, but the child-friendly nature of this film’s aesthetic means, sadly, it doesn’t happen here.

The film is credited to no less than five writers – typical for a collaborative animated project like this – including Pixar veteran Bop Peterson (UP, Finding Nemo), yet the film never feels much more than a collective of generic animated film plot devices. Being your own person. Finding your own way in life. Making your mark. Being kind, even when faced with adversity. Etc. Etc. Etc. Buried beneath The Good Dinosaur’s potential for interspecies complexity is a reverse-engineered tale of overcoming one’s fears a la The Lion King, conveyed via a mish-mash of sledgehammered life lessons and a burdensome orchestral score that compounds the film’s character issues. 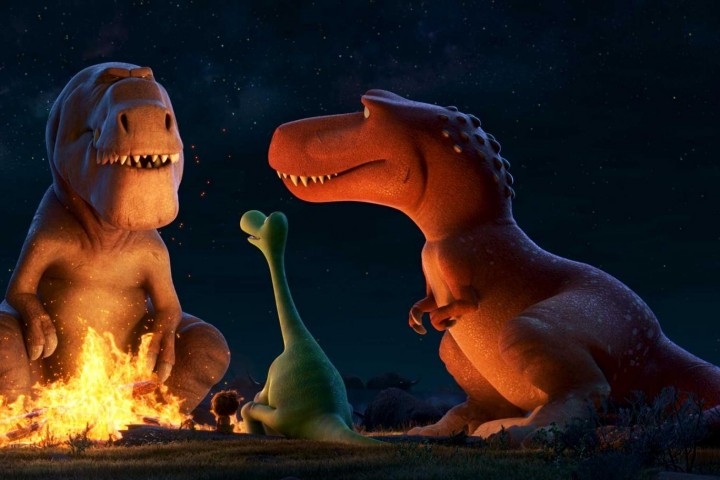 As with most Pixar productions, the choice of voice cast is nothing but class. Again, production vacillation saw the original cast scrapped early in the film’s development (apparently Frances McDormand, who plays Arlo’s mother, was the only one left standing here), but you’d never know it just from listening. Raymond Ochoa’s personable work as Arlo is typically pre-teen, high and pitchy more often than not, but it’s the surrounding quality that saves much of the film from being merely adequate. Sam Elliot shows up mid-film as a T-Rex cattle rancher, and steals every scene he’s in, while Anna Paquin plays his daughter in a role I almost missed until I read her name in the closing credits. Jeffrey Wright plays Arlo’s short-lived father much like a Musafa-esque font of wisdom and patience, while Steve Zahn, as a slightly-mad pterodactyl, Dave Boat as one third of a trio of redneck velociraptors, and Frances McDormand is solace as Arlo’s mother. Even though the story might not require much, the vocal work here is blue-ribbon stellar.

I imagine many of the film’s issues stem from its troubled production, which saw both directors, actors and most of the creative staff replaced at varying points along the journey. Not to mention, the film’s original plot was scrapped in favour of the one presented in the released version, so you just know the care and love that went into The Incredibles and Toy Story 3 is absent to a degree here. First-time feature director Peter Sohn, a long-time Pixar animator and voice artist, strives to deliver a film with enough creative juice to validate its stunning production design, but is hamstrung by a shallow story without real weight. Audiences (myself included) have come to expect much from Pixar, but The Good Dinosaur strikes me as, in terms of story and character at least, something of a step backwards. Snags a C instead of a D because of the astonishing landscape animation alone.