This review is based on the 1942 Academy Award-winning re-release, with added music and dialogue by Chaplin. The film was originally released silent in 1925.

There’s gold in them thar’ hills!

The Gold Rush opens with one of the most incongruous images I think I’ve ever seen in a film: Chaplin’s Tramp, dressed in his traditional coat, cane and bowler hat, traipsing up the highest peak of the Klondike mountain range, seemingly oblivious to the bone-chilling cold the snow and ice depicted would surely engender. It’s a moment of utter hilarity, an oblivious tone-setting device Chaplin expertly interweaves into what becomes one of the great comedy films – silent or otherwise – of all time. Hyperbole doesn’t do justice to Chaplin’s work on The Gold Rush, as moment after moment of comedic genius is thrust upon the viewer – culminating in one of the most famous action scenes in all of silent movie history. 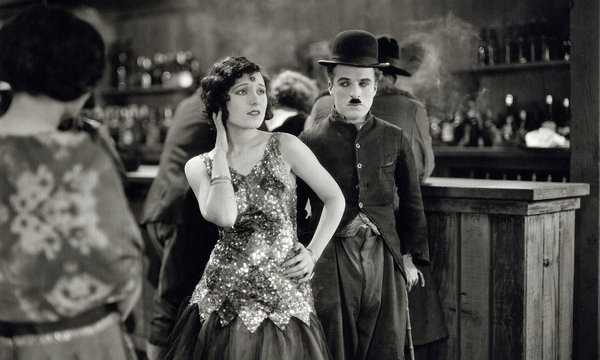 The Tramp (Chaplin) arrives in the Alaskan Klondike during the great gold rush, to stake his claim and find his riches – trouble is, there’s a Bad Guy by the name of Black Larsen (Tom Murray) around, and when the pair becomes trapped inside a cabin high on the mountain, along with fellow prospector Big Jim (Mack Swain), trouble ensues.

Chaplin was 36 when The Gold Rush premièred in 1925, as a silent film snuggled between A Woman of Paris and The Circus. It débuted to generally positive reviews, largely due to Chaplin’s ingenious slapstick routines (notably, a superbly funny sequence inside the snowbound Klondike cabin in which the wind coming through to door pushes people backwards), and his inventive narrative around them. In 1942, Chaplin went back and re-edited the film, as well as recording new dialogue narration (performed by Chaplin himself), streamlining the film significantly, and removing an entire subplot. Essentially, Chaplin’s voice described what might have otherwise appeared as interstitial cards, while also performing much of the on-screen “dialogue” himself. Of particular charm, the constant reference to the Tramp as “the little fellow”. The 1942 edition won the Academy Award for Sound Recording, and the new Score.

Although fairly stop-start in terms of overarching narrative, The Gold Rush has enough comedic warmth to overcome many of its shortcomings, including the improbable romance with Georgia (Georgia Hale, who replaced Chaplin’s real-life soon-to-be-ex-wife Lita Grey in the film) and although it lacks the depth of heart established in, say, The Kid, there’s plenty of fanciful Hollywood magic within The Gold Rush that makes it a real gem. Chaplin’s uncanny ability to find tiny moments of laughter amidst even the most dire of scenarios is wonderful: when Big Jim imagines the Tramp as a chicken, and the Tramp takes the man’s gun away from him and buries it in the snow, he turns and shuffles some snow over the weapon in a very chicken-like manner. It lasts but a second, but is pure genius. The scene in which the Tramp and Big Jim are so hungry they boil and eat one of Chaplin’s boots had me guffawing loudly to the room.

Much like the animated descendants to follow, such as Bugs Bunny or Donald Duck, Chaplin’s Tramp is a nigh-indestructible character who seems to glide through life without obtaining either significant injury or money. His demeanour suggests an affluent intelligence, yet his appearance and status indicate a less fortunate life, even though he’s ostensibly happy with whatever he has at that moment. Chaplin’s broad slapstick skills and constant knowing looks to the camera are one of the most appealing and endearing features of his work, and while The Gold Rush doesn’t perhaps have the subtle wit of previous outings, there’s still a cup-runneth-over abundance of material to satisfy even the hardest film buff. Something as simple as dancing with a pair of bread loves attached to forks at the table is comedically brilliant and wonderfully achieved; it’s this kind of small-scale humour that allows the broader, widescreen material to work as well as it does. 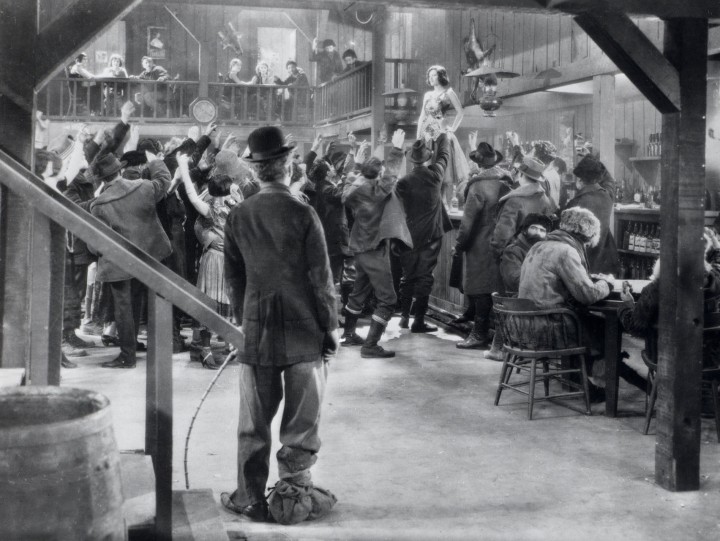 The supporting cast seem to just get that Chaplin is the star here: he’s never overshadowed by a cast member trying to out-perform the director (guess that’s why it’s better to direct!). Georgia Hale is suitably diminutive yet feisty as Georgia, the object of every man’s affection – including resident bully-boy, Jack (Malcolm Waite), who heaps indignity upon indignity over the Tramp’s head – while both Tom Murray and Mack Swain provide the early third of the film with some knockout slapstick farce. Although the romantic angle of the film doesn’t work nearly as well as the “gold rush” element of the movie’s plot, Chaplin manages to escape dramatic weakness by keeping everything light and breezy.

The lure of The Gold Rush is undeniably the film’s effortlessly funny set-pieces. The film’s finale, in which the mountain cabin ends up perched precariously over a precipice following an overnight storm, sets in motion one of the greatest “will it, or won’t it?” sequences I’ve ever seen. Chaplin’s nonchalant hangover acting, as well as Big Jim’s portly counterbalance, are a perfectly devised set-up to one of the most amazing special effects I’ve seen in a film of the era – watch as Chaplin’s Tramp hangs outside the cabin tilting off the precipice, and although it’s obviously a model, it’s so seamlessly inserted into the film that for a moment you believe it isn’t an effect. Chaplin’s use of “The Flight Of The Bumblebee” to accompany the visuals is also delightful.

Amusing from the get-go, The Gold Rush is genius-level Chaplin that works as both a farce and an adventure film. Chaplin’s Tramp persona was well established by this point, and remained an instant box-office draw (the film is roundly regarded as one of the best films of 1925); although not as strong romantically as I expected, the bright spark of the man’s genius shines through in every frame of this thing.