Rise Of The Machines.

Ahead of its, ahem, time, Modern Times is one of those films so attuned to public disenfranchisement with increased industrialisation that it has become something of a cultural and cinematic touchstone in the years since. Made right in the middle of the Great Depression, Chaplin’s social and political statement with Modern Times would have surely fluffed a few feathers, the Rockefellers and so on coming in for scrutiny on the conditions of workers on their production lines. As a film, Modern Times was the very antithesis of modernism – cinema had just embraced the age of the “talkie”, while this film remained largely adherent to the silent movies Chaplin had stamped his legacy all over, so it was kinda against the grain (much like the film’s central character, Chaplin’s iconic Tramp); what Modern Times is, though, is a precise, electrifying diatribe against the rise of machines doing the work of men, and is perhaps as pertinent now, some 90 years after its début, if not moreso. 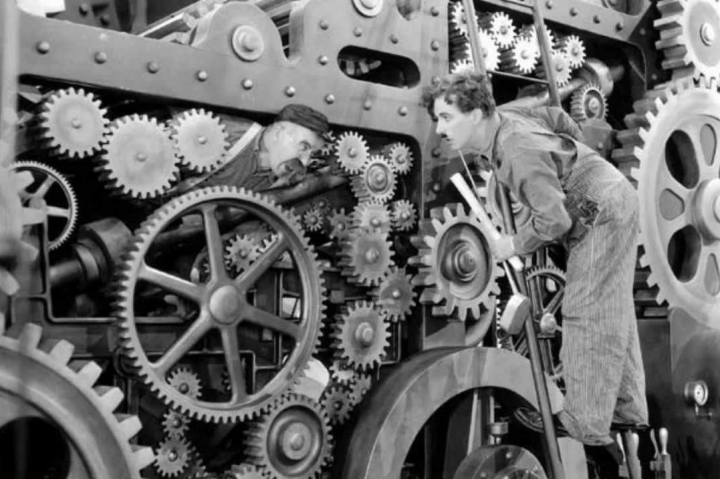 Modern Times is beautiful. A radiant, hilarious, poignant, thoughtful film that captures the insecurity of the early 20th Century and prognosticates the future rather accurately. The dehumanisation of the labour force was a threat to the civilised world, at least that was the thinking at the time, with the Great Depression forcing millions of men into queues for a pittance of job placements – men worked factory production lines whether they be doctors, homeless or business elite; the Depression was the great equalizer in that regard. Modern Times’ assertion that machines, and production line facilities, robbed people of a meaningful career – what was once wrought by human hands now had the sterile, mechanized output of a hundred-fold robotic design.

Chaplin’s commentary of modern life, the association of power with industrialisation (the one thing that actually saved America during wartime, given the war industry was needed to fight), is interwoven with the film-makers often fairy-tale-esque romantic interludes. Chaplin’s co-star, the absolutely gorgeous Paulette Goddard, plays Ellen, a woman of low means with whom the Tramp falls for. Goddard, a former child model, is sublimely stunning, even making looking “poor” quite enchanting. They have a natural chemistry, and the film’s love story works better because of this – easily the best of Chaplin’s many female co-stars, in terms of creative frisson.

Chaplin’s Tramp works in a factory, a meaningless, nameless, loveless job where the workers are pushed to the brink by their demanding boss. One day, after losing the plot following a (hilarious) interlude featuring a mechanised employee feeding machine (I mean, it’s ingenious, but so, so wrong!), the Tramp is fired, before ending up in prison through mistaken identity (isn’t it always?). Modern Times then features a depiction of hard drugs – cocaine, although referred to here as “nose powder” – this is surprising, considering the Code Era of the film meant that illicit drugs could not be depicted at all. After stopping a jail-house riot, the Tramp is released from prison, where he meets Ellen and they dream about settling down (or, in the case of Ellen, getting a feed.) 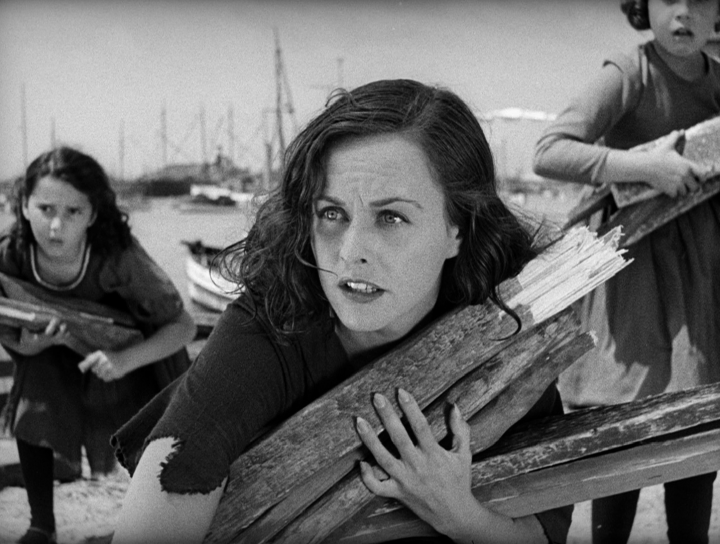 As he’d established throughout his career, Chaplin was a comic impresario – his physical comedy skills were – hell, are – second to none, and he skates (literally and figuratively) through this film with the panache of a daredevil and the ease of a ballet dancer. Key sequences include: the opening factory setting, where Chaplin and his co-workers have to maintain pace with the rapidly moving conveyor belt of parts to be “attended to”. Chaplin at one point (in one of the most symbolic sequences in the film) slides through the cogs of machinery like a human ball-bearing, perhaps reminiscent of his career given the advent of talkies and Chaplin’s refusal to fully commit to the new technology of it here.

A department story fantasy sequence in which the Tramp and Ellen coast along on nightwatch duty easting the store’s food, dressing it the finest clothes, and engaging in all manner of things they would otherwise be unable to afford. The luxury of the wealthy is in stark contrast to the countless workers beyond the sore’s walls who could never afford such items. Watch as the Tramp and Ellen arrive at their “new” home, a planked cabin on the banks of the river (surrounded, naturally, by factories, shipping ports and all manner of industrial accoutrement), that falls apart faster than you can say Buckingham Palace. The Tramp finds himself back inside a factory working the giant gears (of industry, because we never actually see what these places make), before he’s once again arrested.

Then, in the film’s most vaudevillian sequence, the Tramp finds employment in a restaurant waiting tables – yeah, it gets ugly! LOL! – and Chaplin excels himself with the large-scale physical comedy aspects the set-piece involves. Poor Chaplin tries to serve some impatient dude his roast duck, but is continuously waylaid by the maddening crowd.

One of the things I found most amusing with Modern Times is the brusque, abrasive law enforcement of whatever city the Tramp resides in here. At the end of every encounter with failure, the Tramp is inevitably hauled off to prison (wow, that’s harsh), a farcical narrative sink-hole working as a way of keeping tension within the Tramp’s destitute status. The fear of losing one’s job is paramount to Modern Times’ conceit, and Chaplin sees no other way to point to the iniquity of capitalist demands of human beings at the expense of humanity than to make imprisonment a kind of way-station to the next chapter in one’s life.

As with the majority of the Tramp’s on-screen career, Chaplin imbues his iconic creation with a sense of internal satisfaction – the Tramp never becomes mean spirited, instead finding the simple joy in even the most poverty-stricken lifestyle – he’s just happy being happy – which contrasts against the viewing audience’s expectations of anything similar. As with his previous films, Chaplin works on nuance, on the small things to make his comedy come alive. Glances at the camera, knowing winks to the audience, little asides to himself or moments of physical flippancy and flair make his work in this film as sublime as ever – only this time, he’s got himself a really pointed commentary to work within.

Another key point to make about Modern Times, is that it’s the first film in which we hear the Tramp speak – albeit a bunch of nonsense gibberish as a sing-song, in the film’s restaurant sequence. With Modern Times marking the last appearance of the Tramp, and the last “silent” film – although the movie does contain effects and sparse dialogue delivered in key moments – Chaplin wanted to ensure that the Tramp, although an American icon (Chaplin himself was British), was never heard to talk on film, part of his allure during the silent era. With the character’s “retirement” in Modern Times, this ensured the figure would never be cheapened by actually having to give away his accent or speaking voice on film. Chaplin works up to the Tramp’s only on-screen vocals, wringing the expectation of audiences hoping for something marvellous – and getting a song instead. It’s a brilliant moment of performance by a genuine master of the physical comedy art-form.

Modern Times has more subtext and social commentary going for it than I could possibly get into in a single review. As a directorial effort, Chaplin shows deft command of his framing and editing, as well as clever use of timing in the beats of the film’s story. The film is a marvel of production design, character, and story. Featuring the gorgeous Paulette Goddard alongside Chaplin’s resolutely unflappable Tramp, and containing a number of memorable comedy sequences, Modern Times is arguably one of the greatest of Chaplin’s films, if not the greatest. It’s fitting the final shot sees the Tramp wandering off down the highway alongside Ellen, as if saying goodbye to his loyal audience for the final time. Apropos, the Tramp finished on a creative high.