Refuelled with what? Lead?

My big fear when I heard there was a reboot of the Transporter franchise was that we’d be subjected to yet another exercise in tedium by Luc Besson’s most abominable director-for-hire, Olivier Megaton. Blessedly, we’re spared that orgy of ineptitude – although newcomer to the saga, Camille Delamarre, doesn’t fare much better. After helming one of Paul Walker’s final films, Brick Mansions, and cutting his teeth in Besson’s editing parade – Lockout, Taken 2, the second and third Transporter films – he moves up to the big leagues with this, perhaps Luc Besson’s best known franchise. As a soft reboot of the franchise following former star Jason Statham’s decision not to return as Frank Martin, The Transporter Refueled doesn’t really offer much new to audiences expecting a fairly generic action template; new lead Ed Skrein is affable yet utterly bland, the action is all rapid edits and musical punctuation instead of actual… you know, action, and the violence is as pulp and over-the-top as ever. 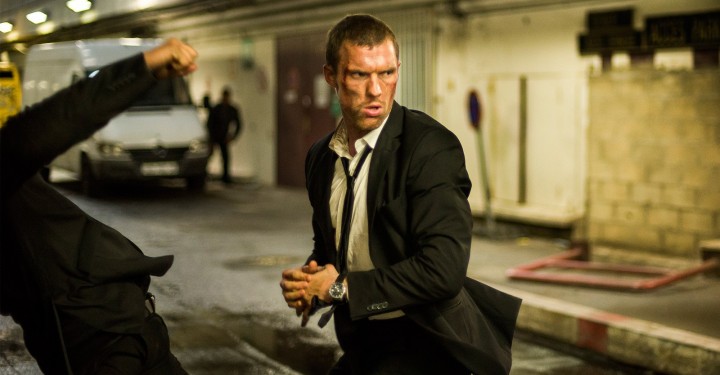 Plot synopsis courtesy Wikipedia:  Former special-operations mercenary Frank Martin (Ed Skrein) is living a less perilous lifestyle than he had previously, transporting classified packages for questionable people. Then he took the contract from Anna (Loan Chabanol) following his 3 rules of no names, no questions and no renegotiations. According to the contract, he should be near the bank for her and her two packages. However, he finds himself thrust into danger again when prostitute Anna and her accomplices Gina (Gabriella Wright), Maria Tatjana Pajkovic), and Qiao Wenxia Yu) orchestrate a bank robbery and kidnap Martin’s father (Ray Stevenson) to confront and kill Arkady Karasov (Radivoje Bukvic), a human trafficker who had victimized Anna years earlier. Anna’s whole team robbed the friends of Arkady and framed his friends against him.

Most of the time, watching films is a pleasurable task; much like writing reviews on them, I guess. Then there’s the times when a film is less a movie and more a vague cobbling of random images and vacuous characters in which mindlessness and narrative iniquity are the order of the day, and those are less fun. Action films, by-and-large, follow one of a small number of templates, typically with a hero, a villain, and sometimes even a romantic interest (usually woven into the fabric of the plot, and even more usually antagonistic the hero at the start), so it’s very hard to get them wrong, as much as an action film delivers on a standardized series of beats and expectations you tacitly acknowledge when purchasing your ticket. Besson’s occasional partner in crime, Oliver Megaton, is somebody who couldn’t direct an action sequence if he needed to save his own life; I’m annoyed to report that Delamarre, either by his own design or by culpable overbearance by producer Besson, is equally bereft of the skillset needed to adequately provide this film with any real energy whatsoever. 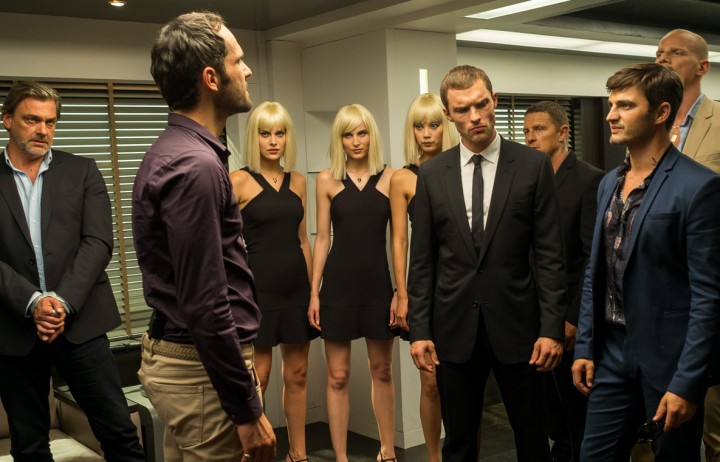 Just once, I mean just once, I’d love one of Besson’s directorial underlings to learn and use the power of not cutting a shot mid-beat. Watch a film by luminaries such as John McTiernan and Richard Donner, for example, and you’ll notice a dearth of rapid-edits in action sequences that allows the audience to actually see what’s going on. Not so here, as the latest in the Transporter films engages in yet more of Besson’s patented slick but superficial exercises in Euro-trash monotony; nameless henchmen who look carved from a timber-yard, a pulsating dubstep and electronic score, a hugely colour graded visual tone, and nonsensical characters following the flimsiest of plot conceits. Transporter movies aren’t known for their depth of concept, and Refueled proves that point multiple times yet again, but I expected at least a little flair in this ongoing B-movie franchise that skips from delightfully contrasting French-set locales to dismally ubiquitous European criminality.

The film’s screenplay is credited to three individuals: producer Besson, Bill Collage and Adam Cooper, who seem merely content to pull from Besson’s grab-bag of cliches and generic potting to produce a film of such limited scope it’s utterly disappointing. Dialogue is thunderously risible, the kind of garbled plot-mechanic-driven tripe designed to get characters from point A to point B without much fuss at all. The film’s designation of character is simplistic – as they have always been in even the Statham films in this series – and designed to maximise the stupid audience members from not being forced to think about what they’re seeing, and every plot beat is as broad and generic as humanly possible. This is the kind of film you could show a three year old and they’d understand it.

Even approaching a film like this with a “style over substance” mentality, there’s little to salvage from the wreckage of what transpires. Refueled is entirely stylish, from Skein’s vehicle to the girls’ sexy couture and the Bad Guy’s obvious taste for high class everything. But even with the emptiness of the plots vacuous wastrel-ridden inadequacy, Refueled’s style seems largely a parody of quality. It’s as if Besson and Delamarre are poking fun at people who act like this, some sort of adolescent social commentary by way of the moral juxtaposition of crime versus Frank Martin’s moral code. No, it doesn’t work on screen, but if one can draw anything at all out of this mess, that’s about it. 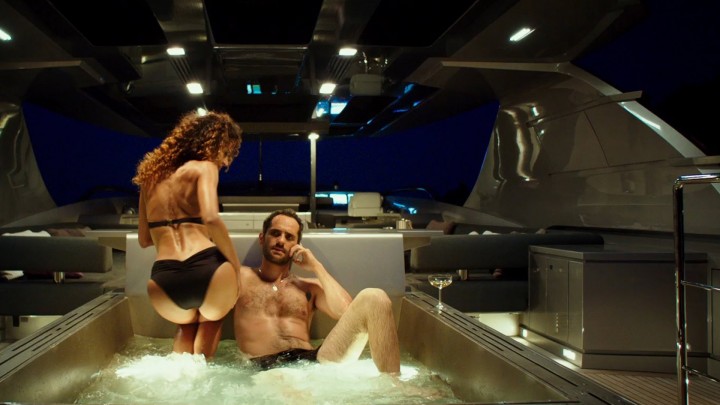 The film is obviously centred around Ed Skrein, an actor with the name of a serial killer and, weirdly, the face to match. As Martin, Skrein ain’t no Statham, and the latter’s shadow (or lack thereof) is a significant blow to the production, although it’s more than assuaged by the appearance of Ray Stevenson as Frank’s recently-retired father, Frank Snr. Stevenson’s relaxed performance easily outshines Skrein, who looks distinctly uncomfortable trying to ape Statham’s square-jawed, ice-cool Martin archetype, although in their defence they both have a solid chemistry when they’re opposite each other. What’s annoying is how bland Skrein is when forced to emote or act opposite anyone else in the film. Loan Chabanol’s femme fatale character, Anna, seems to have stepped straight off the catwalk and into a life of crime and deception (or, revenge), and although often hard to understand with her thick French accent, she’s neither great nor awful in the role. Radivoje Bukvic plays the film’s primary villain with the stubbly, unbuttoned-shirt menace of an archetypal Eurotrash asshole; I think I’ve seen his type in almost every Besson-produced film since Leon, so he’s hardly memorable. Serviceable, more like.

The action, the part of the film you actually pay to watch, is an unkempt threshing machine of editing, Dutch angles and closed-street stuntwork. Generic, formulaic, featuring a smash-n-grab use of slo-mo and car-wreck porn, Refueled worms its way through a 90 minute running time with action as bland and bafflingly ineffective as the film’s leading man. Delamarre might be good editor (or a shitty one, considering his work to-date) but he’s a director without a creative bone in his body. Knowing where to put a camera to make a shot look cool is a lot different than putting it somewhere useful to the story, and knowing the difference is what separates the Michael Bay’s from the Martin Scorsese’s of this world. 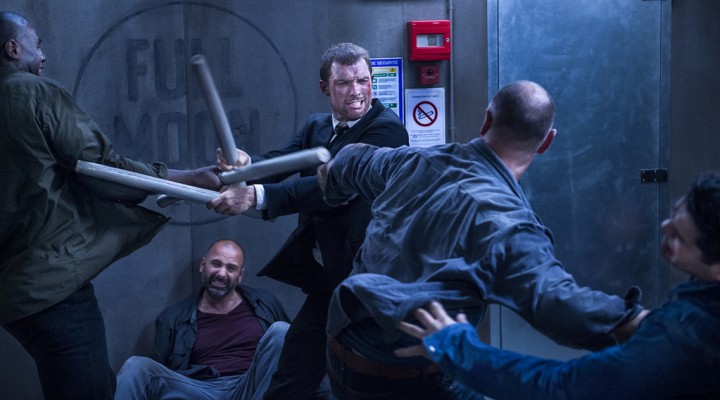 As I wrote once on Olivier Megaton, just because you have fifty angles on the same action or stunt sequence, doesn’t mean you need to use all of them in the movie. Economy of shot, economy of edit, is what makes classic action films so good, and the modern predilection of editing on each punch, sling, gunshot or car-wreck so the audience can’t see the seams of faulty acting or camerawork has become almost passe among modern filmgoers – they overlook it because it’s overused. Delamarre’s editor on this film, Julien Rey (who will most likely direct the next Transporter film, the way these things pan out), seems to have been schooled in the modern style, more’s the pity. Entire action sequences become a hodge-podge of editing and light flares, a cacophonous dirge both for the eyes and, if you’re listening to the soundtrack, the ears. A sequence involving Skrein beating up a quartet of heavies using filing cabinets is ludicrous in concept, and awful in execution. It’s always so hard to make out who’s hitting or shooting who, you kinda lose interest. If you had any to begin with.

The Transporter Refueled is idiotic, asinine action stupidity, the kind of film designed to test a home cinema but little else. Taxing on exactly zero brain cells, the film’s proclivity towards misogyny and aggressively bloodless violence, as well as the aforementioned production inanity, make for a pretty average filmgoing experience. Slick production design cannot overcome Skein’s lack of charisma, Delamarre’s clumsy framing and action choices, and Besson’s overproduced ego bring this film from B-movie action ripper into a D-grade chum bucket of slop.