Okay, so American Ultra stars the two modern-day actors I most despise – Eisenberg’s stuttering, diffident personification of Mark Zuckerberg in The Social Network was a surprising highlight in a meandering package of unmitigated mediocrity (nope, don’t like him), while Stewart’s Twilight-era Resting Bitch Face routine has indefinitely swayed me against her, with the exception of Still Alice – so I went into this thing with expectations so subterranean I’m surprised I didn’t hit China. American Ultra’s ludicrous premise notwithstanding, I didn’t have much hope I’d enjoy this at all, especially in light of the fact that the director, Nima Nourizadeh, was responsible for a film so awful I couldn’t bring myself to finish watching it, Project X. 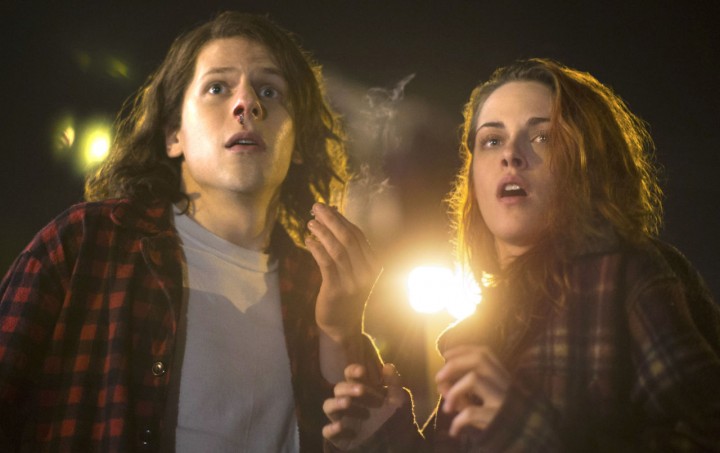 Mike Howell (Eisenberg) is a small town stoner living with his girlfriend Phoebe (Stewart). He works a dead-end job at a small supermarket, has plans on marrying Phoebe, but can’t leave town due to undiagnosed panic attacks. Unbeknownst to Mike, he’s actually a programmed asset for the US Government, an asset now targeted for termination by CIA Agent Adrian Yates (Topher Grace), as part of a liquidation of old assassination programmes. Howell’s CIA handler, Victoria Lasseter (Connie Britton) activates Howell using a series of codewords, escalating Yates’ mission into one that puts the entirety of the town’s population. Howell’s training enable him to overcome many of the assassins sent to neutralize him, but it’s when he discovers Phoebe’s deep dark secret that things take a turn for the worse.

Well, dammit, I did enjoy this movie. American Ultra’s slick, comedic action aesthetic brings its obvious connectivity with Jason Bourne and Pineapple Express and swirls it all into a lovely, balletic opera of blood and narrow escapes. While it behoves me to say that Eisenberg doesn’t make the most commanding action screen hero, and is definitely no Matt Damon, he acquits himself superbly in the films multitudinous action sequences, many of which involve explosions and sl0-motion focus on nuance.

As a pot-head Eisenberg excels, the tic-laden mannerisms and verbal stuttering he’s known for slowed down to a dull roar and with that comes an evolving character that – most of the time – is actually quite charming. At the very least, Eisenberg’s performance isn’t annoying, so there’s that. Stewart also ain’t bad. As Phoebe, the role isn’t demanding at any cerebral level – she’s something for Eisenberg to bounce off for the majority of the film, even when her character’s big “twist” is revealed, but Stewart makes a nice romantic interest for her male lead (no, I didn’t forget they starred together in Adventureland) and provides us with a continual humanising of a guy whose abilities make him infinitely more dangerous. 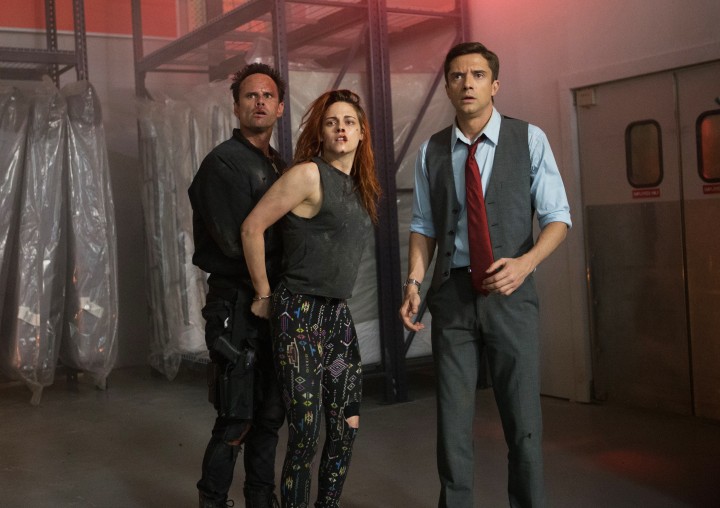 As we know, every hero needs a villain, and American Ultra’s villain is Topher Grace, whose snivelling, conniving Agent Yates is about as bureaucratically malevolent as it’s possible to be. Grace sells the role with a sly wink, pulling as many Bad Guy snarls as he’s able to muster without seeming too camp or overacting – nah, he does overact a bit, but in this respect it only serves to highlight the subversive stylised nature of the film. Connie Britton’s Agent Lasseter demands less of the viewer than we’re led to believe in the opening sequences, and her relationship to Howell is difficult to pin down in any matriarchal way, but Britton commits, and that’s commendable. Throw in a hilariously cool performance by Walton Goggins as a military heavy (who loses his front teeth early in the movie), a wannabe gangster in John Leguizamo’s ill-named Rose, and Tony Hale as a poor Langley operative being pulled in different directions by his superiors, and the film seems to click really well.

It’s all entirely stupid, naturally, but Nourizadeh directs the action scenes with accomplishment and a sense of placing and timing that is as good as anything you’ll see. The fights are augmented by a lot of digital blood, which does look fake and detracts from the film at times, but otherwise the more frantic sequences in the film are solidly handled. The dramatic or emotional moments of the film are also given some nice heft, something I think provided by the cast rather than anything Nourizadeh does himself, but American Ultra balances the fun and gore and violence with a suitably contrasting emotional weight that gives the film some depth.

As disinterested as I was approaching American Ultra, I admit the film’s cool premise and jokey, wry attitude to action made me chuckle more than a few times, and considering Eisenberg’s presence here that’s a truly amazing thing to consider. I’d label this film as “lairising” in methodology, an assaultive blast of fantasy and violent propellant mixed into a visual medium that never wavers in its understanding that sometimes, we don’t need to take things so seriously to have a bit of fun. Nice to see Bill Pullman getting work, at least. Solid, entertaining pulp.