Mean-spirited threequel does away with most of the charm of the first and second films in Tim Allen’s ubiquitous seasonal franchise, replacing the magical sense of Christmas magic with a veneer of snark and cynicism – the film is a metaphor for the commercialization of Christmas, so I guess if that’s what the filmmakers were aiming for, it worked – the tired slapstick and farcical elements shoehorned around Martin Short’s arrival as the dastardly Jack Frost feel mishandled, and the film is a drudge to get through. Perhaps as close to an anti-Christmas film as we’re ever likely to get, The Escape Clause is filled with pretension and hackery, a complete derailment of the franchise and one, sadly, from which it has never recovered. 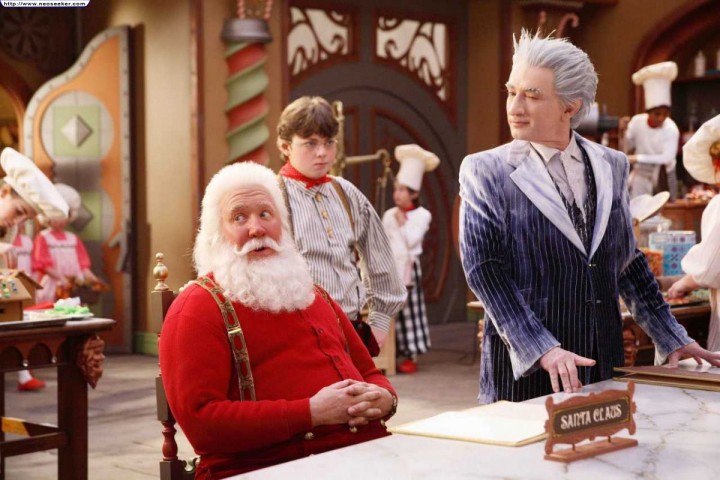 Lengthy plot synopsis courtesy Wikipedia: Four years after the second film, Scott Calvin/Santa Claus (Tim Allen), and his wife, Carol (Elizabeth Mitchell), are expecting their first child as Christmas Eve approaches. Carol is missing her family, so Scott invites his in-laws, Sylvia and Bud Newman (Ann-Margret and Alan Arkin), up to the North Pole, along with his former wife, Laura (Wendy Crewson), her husband, Neil (Judge Reinhold), and their daughter, Lucy (Liliana Mumy), to keep Mrs. Claus company. Meanwhile, he is summoned to a meeting of the Council of Legendary Figures consisting of Mother Nature (Aisha Tyler), Father Time (Peter Boyle), the Easter Bunny (Jay Thomas), Cupid (Kevin Pollak), the Tooth Fairy (Art LaFleur), and the Sandman (Michael Dorn). Jack Frost (Martin Short) also arrives and is in trouble. He is jealous that he has no holiday or special occasion in his honor, and has been promoting himself during the Christmas season. Mother Nature accuses him of attempting to upstage Santa, and suggests sanctions against him. When Santa says that he is dealing with how to get the in-laws to come without revealing that he is Santa, Jack Frost manages to negotiate a light sentence of community service at the North Pole, helping Santa and the elves put up various Canadian-themed paraphernalia, as Carol’s parents believe Scott is a toymaker in Canada. However, Frost’s ultimate goal is to trick Santa into renouncing his position, with unknowing help from Curtis who accidentally blurts out what the Escape Clause is and where it is. Thus, Jack Frost sneaks into Santa’s hall of snow globes (which contain images of all the Santas throughout world history) and steals a special one containing Santa Claus (aka Scott Calvin) that will invoke the Escape Clause, in which Santa must hold the Globe and say “I wish I’d never been Santa at all” thus sending him back in time and undoing his career as Santa. When Lucy discovers this crime Jack Frost freezes her parents and locks her in a closet. Jack Frost causes trouble for the family that makes Scott think that he must resign to make things better. 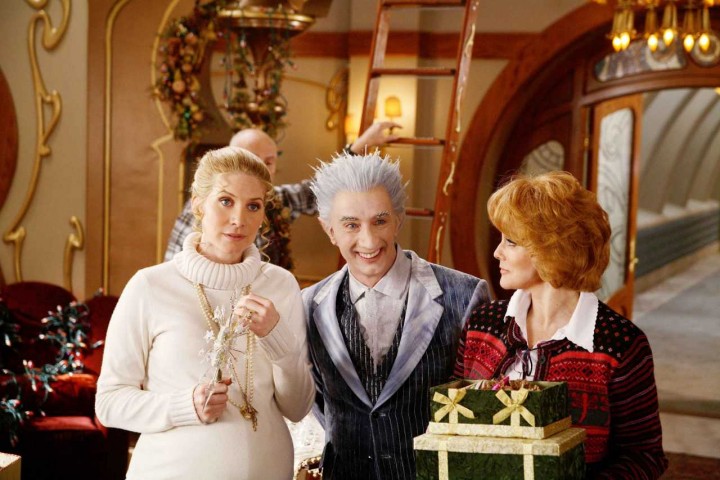 Basically, Jack Frost is jealous of Santa, steals Santa’s job and becomes the icy Man In Red. Subtext is everything, and The Escape Clause’s prima fascie seems to be entirely crafted around back-handed snark at modern society’s over-commercialization of the Christmas holiday; the latter stages of the film, in which Jack Frost has assumed the role of Santa, sees the North Pole transformed into a winter wonderland theme park, complete with sweater-wearing tourists, overpriced “novelty” experiences, merchandise and, naturally, a Vegas-style showtune number for Short’s typically camp screen persona. It’s a tepid, uninspiring full-stop on what is largely utter inanity, a hamfisted attempt to bring both Scott and Carol’s families together to tel them in on Scott’s “big secret” – one of those films where if people just spoke to each other about stuff, half the problems the film throws up could be avoided.

Yes, another seasonal film where human idiocy (or, as is the case here, Legendary Figures idiocy) provides the catalyst for the majority of the plot, and as ill-advised as this plot is, it’s nothing to do with Michael Lembeck’s generally workable direction that brings Escape Clause undone. The main problem for this film is that it replaces the original films charm, and the second film’s sense of internal mythology, with a mean-spirited jibe at the very notion of Christmas being a “family affair”. Scott’s family, portrayed by Wendy Crewson and Judge Reinhold, who simper and pratfall even more than usual, to grating effect, are in on the secret of Santa, but Santa’s pregnant wife Carol has family who believe she’s in Canada married to a toymaker. So because the secret of Santa is not exactly set in stone, depending on who may or may not give the secret away, we have The Escape Clause.

Admittedly, the cast work with what they have, and it’s not a lot. Alan Arkin and Anne-Margret, who would normally make a dynamite pair of casting choices in almost any project, look lost among the tinsel and scattershot laughs, Arkin’s performance rating higher because he seems to get the joke a little better (but not really) – he actually looks annoyed he signed up for this movie. Sweet little Liliana Mumy, who plays Scott’s niece, is wide-eyed and awestruck by the North Pole, and provides the film’s sense of childlike wonder, but there’s no balance to it in the way the first two films, in which Scott’s son Charlie (who appears here in what is basically an extended cameo) was the crux of the plotting primarily, managed to achieve. 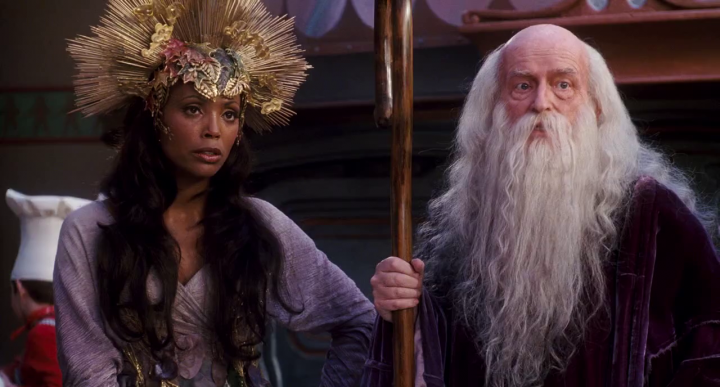 Hell, even the normally amenable Tim Allen is reduced to simplistic mugging to draw any comedy from the disastrously uneven plot. Allen’s shtick runs aground against Martin Short’s abrasive Jack Frost performance, Frost being the “misunderstood” catalyst for the events which transpire to get Calvin out of the top job. If you’d said to me twenty years ago that having Tim Allen and Martin Short in the same film would be a disaster, I’d have slapped you silly, but it’s true – their comedic stylings don’t work well together. Short’s camp, stage-bound sense of vaudeville and Allen’s iconic grunt-grunt masculine bass notes actually collide badly, skewing the story into the realm of nihilism and darkness when it should be simpler, less persnickety than the film offers. While I’d lay the blame at Short specifically, because the role demands a sense of the character being churlish without being mean-spirited (a little like the way we felt sorry for Gollum because the “ring made him do it” thing), the script’s inability to maintain a sense of focus on the tone of the film is the ingredient souring this seasonal pudding.

Lembeck actually provides the film with a modicum of respectability with it’s use of effects, sense of minor holiday cheer (amid the shouting, misdirection and time-hopping Jack Frost machinations) and childlike sense of glee at the nature of Christmas’s inherent magic, but buried deep within the film is a maudlin sense of its own futility. Instead, we’re granted a one-way trip into a nightmarish North Pole scenario, and while I get that in order to lift the hero up you need the stakes to be high (and for a second sequel, higher than ever), there’s just something off about The Escape Clause’s central conceit.

It’s also the juxtaposition of humor and drama that doesn’t feel quite right. Short’s performance would have been spot on if the film had been less platitudinous with its desire to pull funny faces to draw a laugh every few minutes. Rinehold, Crewson, Allen, the rest of the Legendary Figures – hell, I don’t think there’s a person in the film who doesn’t at least roll their eyes or crack a weird face at some point – The Escape Clause is set up as a farce, a well-meaning one, but the addition of a Jack Frost who isn’t in the same vein as the rest of the film brings things unstuck. Allen tries to keep things balanced, but even his well-meaning “serious” face can’t right the ship.

The third Santa Clause film is undoubtedly the last – at least until somebody comes along to reboot the franchise – thanks to a ruinous decision to milk both the film and the premise for all its worth. It’s a decidedly uneven, laugh-free zone (at least adults will find it so – the kids will cackle at all the things going whizz, bang and pop) and lacks much of the emotional resonance the previous two films had in spades. The film tries, it really does, but events and casting conspire to keep this third installment from being anywhere near as memorable for anything other than the wrong reasons.

2 thoughts on “Movie Review – Santa Clause 3, The: The Escape Clause”