So meta, it even references itself.

Subversive, mocking, ironic, rhetorical: it’s vaguely appropriate for Gremlins 2 to start with an animated segue from Bugs Bunny and Daffy Duck, two Warner Bros icons, because in all the mayhem which follows the opening credits, the film’s appropriation of the Looney Toons brand of humour is all to obvious. Swimming in a darker, more adult tone, however, than Fritz Freleng or Chuck Jones would ever be allowed, Jo Dante’s sequel to his mid-80’s hit Gremlins is overflowing with inventiveness, technical wizardry and a “pull out all the stops” sense of grandeur the original film could never hope to achieve. 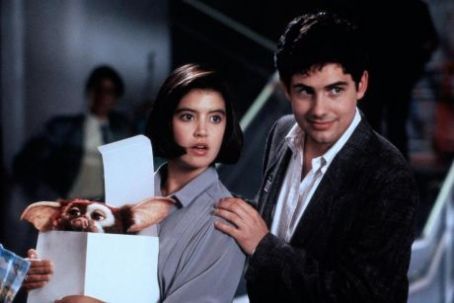 Set sometime after the events of Gremlins, Billy (Zach Galligan) and his girlfriend Kate (Phoebe Cates) have moved to New York City, where they work in the new office tower [real world, corner of Park Avenue and East 40th Street, New York] of billionaire industrialist Daniel Clamp (John Glover). Billy works in graphic design, for his office manager Marla (Haviland Morris), while Kate works as a tour guide showing visitors the state-of-the-art technical wonder of Clamp Tower. However, following the death of Mr Wing (Keye Luke), Gizmo finds his way to one of the Clamp Building’s research facilities, run by the cruel Dr Catheter (Christopher Lee), where he inadvertently becomes wet (naturally), allowing a troupe of nasty, hazardous Mogwai spawn to run riot through the building. Inevitably, these Mogwai eat after midnight, transforming (sorry, metamorphosing) into the hideous Gremlins Billy, Kate, and the visiting Mr & Mrs Futterman (Dick Miller and Jackie Joseph respectively) have always feared. While the creatures antics are broadcast to the outside by resident television horror host Grandpa Fred (Robert Prosky), Clamp security chief Forster (Robert Picardo) tries to save his own skin from the deadly disaster befalling the tower.

If anybody ever argues for the modern predilection of CG over practical effects, usually my first response is to ask if they’ve ever seen a Gremlins movie. Children of the 80’s are perhaps the last of their generation to have the privilege of witnessing cinema at its pre-computer enhanced best, before Jurassic Park (which would come out three years later) and Terminator 2 (only 1 year later) revolutionised what could be achieved on the big screen with visual effects. Gremlins 2 is like the bastard child of The Muppets and Peter Jackson’s Meet The Feebles, an adult, thematic, often nasty piece of nightmarish hokum that works because the entirety of the effects within this movie are lovingly hand crafted, by hand. Using both puppets, models, stop-motion animation, rear-projection and a hint of rotoscoping, Gremlins 2 is practically a showcase for the argument that more often than not, if you want things to feel real on the screen, they have to be real in front of the camera. 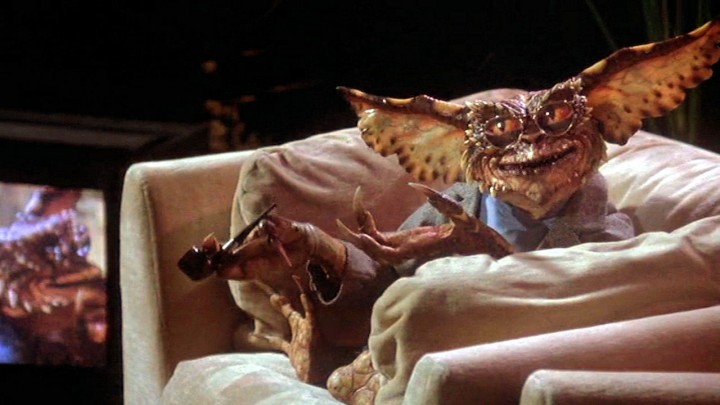 Gremlins 2 is also a film so attuned to its own subversive brand of humour, it’s not afraid to actually reference itself as a work of fiction within the film itself – at one point, the film stops to reveal a projection screen, as if Gremlins 2 has jammed and stopped playing, only to cut to a scene of a woman and her son complaining to a theatre worker than Gremlins 2 isn’t the film she was expecting to see (or something), before Hulk Hogan (yeah, Hulk freakin’ Hogan) gets up to berate the Gremlins into putting the film back on. Older adults will be left scratching their heads, but kids and young adults will get the meta humour involved in this kind of scenario. Dante’s sense of humour works on every level here: the film’s Warner Bros-funded foundation is not only hinted at, but pushed front and center in two specific references – one to the ’89 Batman movie, and another in a tattoo one of the Gremlins gets of the WB shield late in the film – and it’s this scattershot blast-gun approach to kitchen-sinking the film’s sequences with whatever jokes the writers could come up with on the day that makes Gremlins 2 so much fun.

The allure of the film is twofold. One, seeing what kind of crazy creature designs the production comes up with this time, and seeing what kind of mayhem said creatures can inflict on the inhabitants of Clamp Tower. Dante and his team, led by the always brilliant Rick Baker, have crafted some wonderful puppet designs into this film; a spider-Gremlin, a googly-eyed Gremlin, a transgender-Gremlin (not credited as Caitlyn but I’m appropriating the name henceforth!), a “brain” Gremlin (voiced by Tony Randall) – hell, if you can think it, Baker and his team look to have done it. The film’s so cluttered with Gremlin designs they do occasionally feel too similar (I think there were a couple of the googly-eyed ones, just to confuse people) but on the whole, this effort makes the first film look like a test run. 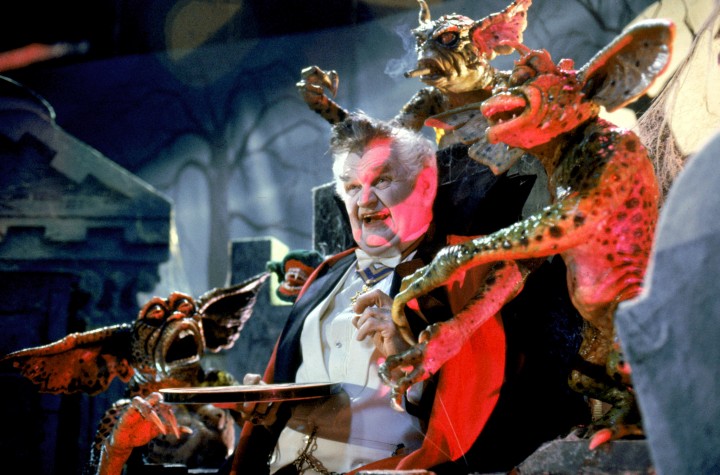 The mayhem we see in jaded New York (because New Yorkers in the 80’s were so obviously me-me-me focussed, and Dante plays on that to the extreme) contrasts with the kind of luxury and superiority people have when they think they’re in control. The security in Clamp Tower is impressive (cameras even on random caged off doorways, no less) although staffed by what I assume are New York cops working an extra shift for extra pay, and the technology behind the building is meant to impress and awe (it does, although its vaguely Star Trek-ish approach to voice commands and computerised instructional monologuing (“the building is on fire, please resort to the age old human emotion of panic, and flee the building”) borders more on parody than it does the reality of the film’s menacing overtones.

Daniel Clamp, so obviously a reference to New York’s resident f@ckwit Donald Trump, is given a big-toothed grin by the wonderful John Glover, with Clamp as shallow and bucolic generally as he is passionate about his city and his PR. Robert Prosky’s jaded horror-show host, Grandpa Fred, is a Dracula impression that has a genteel, graceful sorrow about it, and Prosky’s just terrific. Watching future Star Trek Voyager doctor Robert Picardo slime it up as a snivelling security chief is fun as well, particularly when he becomes ensconced with the aforementioned transgender Gremlin. Christopher Lee provides the film with a certain sense of Frankenstein’s Monster about proceedings (another touchstone notched by casting him, that canny Dante!) as a genetic scientist who thinks only of “the research”, and his final fate is as sweet a death-scene as we’ve ever seen from Lee.

Returning from Gremlins, Zach Galligan and Phoebe Cates once again make a charming, if starkly asexual couple, with their relationship issues pushed faaaaar to the back of the film once Gizmo arrives on the scene, while the always awesome Dick Miller, as Mr Futterman, and Jackie Joseph, as the dithering Mrs Futterman, steal every scene they’re in (and that’s a lot, bless ’em). But you’re not really here for the human characters, are you? No, you’ve paid to see Gizmo and the Gremlins wreak havoc around the city – and Dante’s directorial flourishes allow you to bear witness to one of the most astonishing large-scale puppet assaults on humanity ever captured on film. To the point that the Gremlins, the villains of the piece, actually become the stars of their own movie. Whereas Gremlins focused on Billy, his family, and Gizmo, Gremlins 2 spends much of its time setting up Gremlin punchlines, and delivering on them in typically gooey, messy style, that it leaves Galligan, Cates, Miller and the terrific John Glover, little to do but look alternately shocked, puzzled, disgusted and amazed.

Although it might throw out the pastoral symphony of the previous film’s small-town fantasy, Gremlins 2’s big-budget design and clever, meta-references and deprecating irony is the kind of excessive success the 80’s threw at cinema audiences. Gremlins 2 is a film in which you can see the work behind it; unlike the CG slickness of modern productions (God help us if a Gremlins threequel is made, it’s as likely to be an all-CG affair….) Gremlins 2’s ragged edges and hinkey in-camera practicalities, led largely by technological limitations, give the films a sense of weight and depth the pixel-fans seem to disregard. Abundantly kooky, filled with pop-culture references and wry in-jokes, as well as a number of minor celebrity cameos (which, sadly, date the film more than anything), Gremlins 2 is a legitimately over-the-top sequel that nails everything you enjoyed about the original and amps it up to 11.