Director :   Antoine Fuqua
Year Of Release :  1998
Principal Cast :  Chow Yun-Fat, Mira Sorvino, Michael Rooker
Approx Running Time :   87 Minutes
Synopsis:   Failing to kill anymore because of his conscience, a troubled hit-man seeks aid from a forger to help him get papers to China. However, the drug-lord has hired replacements to finish the job and kill the hit-man.

Oh Chow, what the hell happened to you?

The early 90’s were an excellent time to be Chow Yun-Fat. Off the back of cult success in Asia working with directors such as John Woo (Hard Boiled, The Killer) and Tsui Hark, and having gathered a considerable fanbase in the United States, Chow came across to Hollywood as a transitional mainstream Western star-in-the-making, similar to what Jackie Chan had achieved. Unfortunately for Chow, mainstream success eluded him somewhat, a fact that deflates me considering his charisma as a screen star. Yet, if you were to ask casual audiences his name, based purely on appearance, I’d wager the vast majority wouldn’t have a clue, although they might know him by sight. His first American film, The Replacement Killers, was an all-out action affair, a John Woo clone directed by rising Hollywood talent Antoine Fuqua (who would go on to film Shooter, Training Day, and more recently Southpaw), a renowned music video director. The Replacement Killers was Fuqua’s debut feature as well, so plenty was riding on its success. 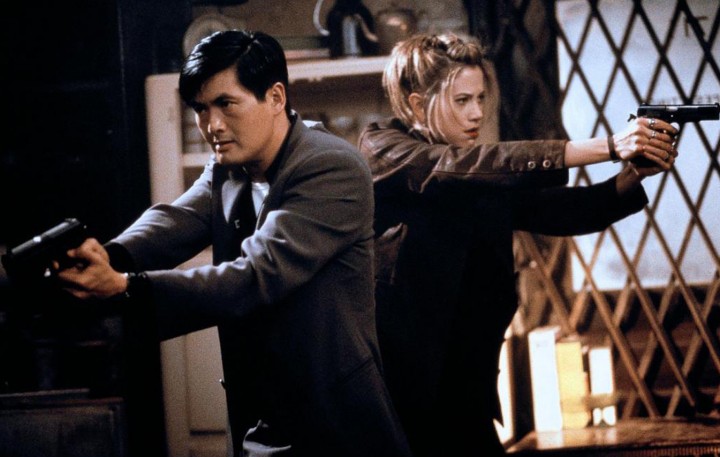 Chow plays Chinese Triad assassin John Lee, who is ordered to kill the son of LA Detective Stan Zedkov (Michael Rooker) following a drug bust gone bad, in which the son of local Triad chief Terrence Wei (Kenneth Tsang) was killed. Lee, unable to kill a child, refuses at the crucial moment; with his refusal comes the Triad’s attention, and now now only is Lee in danger, but Zedkov’s son is still a target. Lee locates a low-fi identity forger, Meg Coburn (Mira Sorvino), to aide him in his return to China to protect his own family. However, as he meets with her, her home is attacked by “replacement killers” looking to kill Lee, and so the pair must go on the run to escape the Triad and get Lee back home, while also protecting Zedkov and his family from a similar fate.

I was surprised to learn that The Replacement Killers was a financial failure at the box office back in 1998, raking in barely $20m off a $30m budget. In every respect, the film should have been a moderate success; it follows a Hollywood template that’s a tried-and-true winner. A lonely, conflicted assassin. A sexy young woman caught in the crossfire. Plenty of fetishistic gunplay, moderate violence and a sense of justice among evil. Plus, a popular cult actor at the peak of his allure as a box-office draw. How could this fail?

It’s not like The Replacement Killers doesn’t do what the poster, tag-line and basic synopsis indicate it will. The film delivers on all counts, from its heady visual tone and overly cloned John Woo-esque camera sweeps, to its blistering bullet-ridden set-pieces and mumbling, incomprehensible central hero (Chow had learned very little English at this point, and from what I understand had to learn – and deliver – his lines phonetically) – there’s not a moment of the film that doesn’t scream “90’s action movie!” Abandon common sense or characters with even vaguely human emotional qualities, and you have some idea what this film is like. 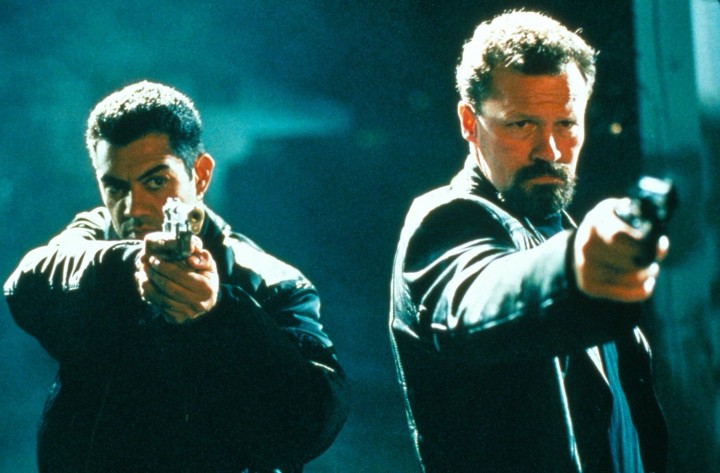 There’s not a believable character anywhere here, not even Oscar winner Mira Sorvino can give her character, a sassy blonde forger, any real depth other than to spend a lot of time dodging bullets and feeling sorry for Chow’s predicament. Archetypal tough-girl, Sorvino delivers more than enough smackdowns to make her a solid mirror for Chow’s more sedate, insular John Lee (because American audiences probably couldn’t handle his character having an actual Asian name…).

For much of his career (or at least, the bits of it I’d seen to that point), Chow Yun-Fat had the market cornered in characters of low-standing with a moral code – the conflicted, don’t-want-to-kill-any-more assassin is a genre archetype, the kind of character Chow excels at in films such as The Killer, the A Better Tomorrow franchise, and Hard Boiled. His intense performances in those films, coupled with his “cool” factor in handling weapons (have you actually seen the end gun-battle in The Killer? Oh man….) led me to think a similar type of film was on the offing here, and to a degree it is. But there’s a problem with The Replacement Killers that is hard to pinpoint, particularly now that my film appreciation has become more mature in the years since, and I found myself a little disappointed.

The cast are, as I mentioned, solid with what are effectively underwhelmingly generic roles. There’s not a character in this film that behaves like a real human; rather, each character does his-or-her best to deliver the pulpish, nonsensical dialogue with as much sincerity as they can muster, and with a few exceptions it kinda-sorta works. But the script feels like it was written to be a film trailer: almost every line is delivered with a degree of import that defies reason, as if every utterance is a matter of life or death (and it probably is), and what little humor the film has is smothered beneath a veneer of graceless menace. Watching Sorvino, an actress who had stood on the Oscar stage barely three years earlier for Mighty Aphrodite, reduced to a support role in a generic action film, you get the sense that this was done for either the paycheck, or the prestige of being an action star, and neither quite worked out. Sorvino’s chemistry with Chow is limited, largely because of the language barrier I think (although apparently Sorvino speaks fluent Mandarin…. why this wasn’t worked into the film, I’m not sure), and even at a platonic level there’s a sense of forced togetherness about their situation than goes beyond what the script demands. 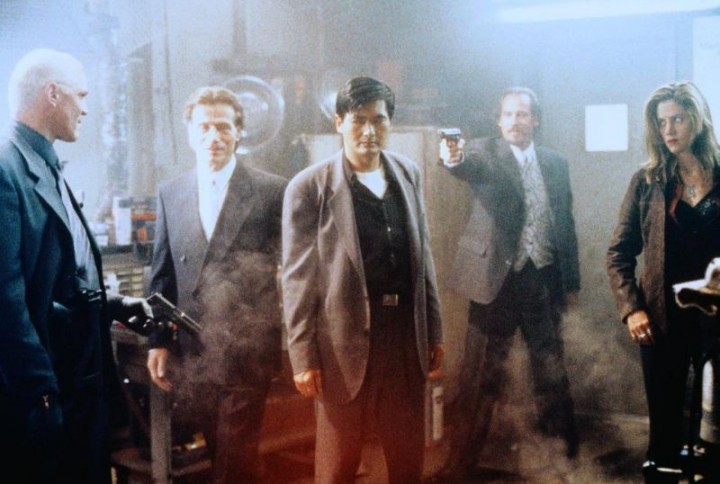 Considering the language barrier, Fuqua wisely keeps Chow relatively dialogue free, instead giving him more than enough stares, glares and grimaces, mixed in with the constant click-click of chamber loading we’ve come to expect from gunplay violence in film depiction. Whereas Chow’s Asian films captivated with a sense of poetic, balletic motion as the violence and action ensued, in Fuqua’s film the very same method of performance just kinda sits there, inert. That’s not Chow’s fault, I think, because he can do these roles in his sleep (and probably has, at some point), but the transition from Asian cinema to what is effectively a clone of those action-fu films in this movie seems to have struck a reef somewhere across the creative straits.

Fuqua’s attempt to mimic John Woo’s successful brand of action, with plentiful slo-mo and crisp, bullet-hit jetsam spraying across the frame, and sweeping camera crane shots, is workmanlike but lacking something Woo has in spades: soul. In trying to achieve a similar action aesthetic, Fuqua appears to have neutered his own natural style, a style he’d solidify in future projects such as Training Day. Considering Woo co-produced the film, perhaps it’s hardly surprising he had to “fake it” a bit, but I think as a piece of art it’s considerably worrisome that it wasn’t a success. In many respects, perhaps Fuqua was simply a director for hire, a young prospect who could be told what to do by producers looking to achieve a specific outcome.

In spite of its problematic overall aesthetic, The Replacement Killers is still an enjoyable pulp romp, a B-movie designed to shuffle audiences through a generic plot and even more generic characters with a sense of flickering fluorescence and metallic hyperkineticism. The acute sense of guns being a manifest part of a person’s personality would be articulated in The Matrix the following year; here the gunplay is delicious and stylish to the point of ludicrousness, but given the proclivity of Hollywood to outright steal from another culture’s established paradigm this isn’t surprising. The Replacement Killers doesn’t hold up terribly well, really, but it’s a short, high-octane burst of silly pretender-fu junk that can’t help but be viewed in the laughably enjoyable manner it elicits as a piece of popcorn cinema.