I had so many problems with this film, I barely know where to begin. So let’s begin at the end: Pixels is absolute garbage. Sexist, vaguely racist, demeaning to all involved and effectively taking a large, steaming dump on the memory of your 80’s childhood, Pixels’ potential is severely squandered by lame jokes, lamer plotting, and characters so unlikable, it’s like having your eyes literally nailed shut. And in what misogynistic fantasy land does Kevin James – yeah, fat ol’ Kevin James – ever become the American President, and one who can’t read, to boot? 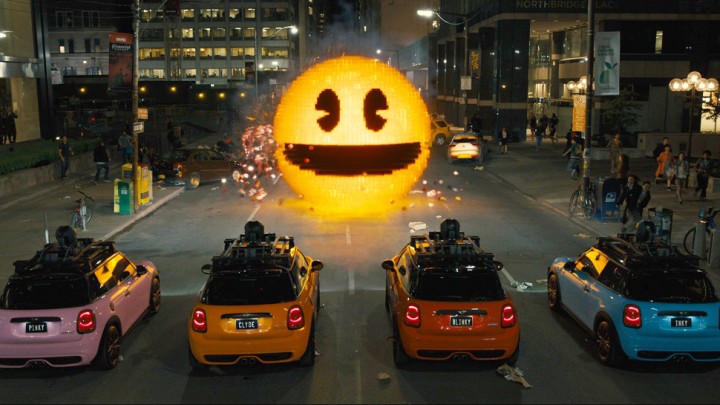 One-time video game champ Sam Brenner (Adam Sandler) spends his days installing home theater gear into rich people’s homes. One day, a group of aliens destroy a US military base, leading President William Cooper (Kevin hart), who is a long-time childhood friend of Brenner’s, to call in his former friends, including Ludlow Lamonsoft (Josh Gad), to combat the “video game aliens”, who have taken the form of old 80’s arcade game characters, such as Pac Man and Donkey Kong.

Frankly, writing about this film is just a chore, a chore unlike any other I’ve face in my film reviewing career. It’s so depressing, coming into Pixels, knowing it’s an Adam Sandler film you expect a little juvenile humor – potty mouthed, overly sexualized, grossly misogynistic, stupid, inane, lame – only to find that you underestimated just how bad it could be. The screenplay, Tim Herlihy and Timothy Dowling, is just dire, a slew of 80’s sentimentality mixed with non-sequitur references to how awesome life was back then compared to now – seriously, it’s like Sandler and his posse never grew up, and if only it was possible to send them back to the 80’s so we never have to watch them again, in anything. This film is so laughably unfunny (a contradiction, much like this whole f@cking film) it’s egregiously wasteful of all the talent involved in pulling it off.

The joy of watching Pac Man destroying New York City streets is mitigated by the utterly horror of having Adam Sandler’s gormless mug mouthing idiotic asides to camera whilst doing so, not to mention Josh Gad’s wretched performance (also, unfunny) as Ludlow, and poor Peter Dinklage’s stuck-in-the-80’s dialogue thuds to the floor meaningless. Gah, this film is a horror show of wretchedness, an effects driven spectacle aiming for Independence Day fun but achieving Battlefield Earth levels of stupidity. Yeah, I compared this film to Battlefield Earth. Michelle Monaghan looks for all the world like she just wandered onto the set and into a contract, but she powers on in spite of the film’s joyless sexism. 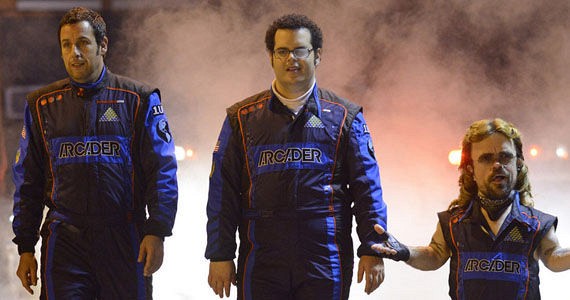 It’s a well known fact that I despise Adam Sandler, as well as his career, built off of inane comedy film such as The Waterboy, Little Nicky and whatever the f@ck that film was where he was a hairdresser. Pixels is yet another turd of a film, a stinky dump on the faces of stupid audiences still shelling out actual cash to watch Sandler’s films. Pixels’ criminal clusterf@ckery is mishandled by the normally competent Chris Columbus, a man who gave us the first two Harry Potter films, and yet tries to work beer-n-pizza humor into what could have been a fairly straight-up action adventure movie. It doesn’t work – Columbus’ pedigree and Sandler’s redneck classlessness mix as well as oil and water.

Pixels is built as a monument to the bygone era of arcade games; trouble is, the kids who’ll enjoy this dog of a film won’t get half the references (a fact made clear when Sandler’s character has to explain the basic gist to a kid, early in the film) and the big kids old enough to get the references will find themselves vomiting into their mouths a little over how recidivist Sandler can get away with being so crassly awful once again. Pixels is a tragic horsef@ck of proportions as yet unmeasured. I detested watching this, I abhorred every second of Sandler’s smug, punchable face as he rubbed the fact he gets billions of dollars to appear in these films when good film-makers struggle to get funding on Kickstarter. I thank God it was a film worthy of his minuscule talents, because the more people who hate him, the less people will be willing to pay him to do movies. This movie is awful.