So, don’t open the door.

I approach any film directed by Eli Roth with exceptional caution. I’m admittedly not a fan, huge or otherwise. I find his brand of torture-porn horror the anathema of quality genre film-making; the awful Hostel films, particularly. I’ve generally avoided most of his stuff since Cabin Fever left me feeling deflated. So Knock Knock, a thriller film which sees Keanu Reeves making the mistake of opening his front door, felt a little less like the Eli Roth I’d come to despise, mainly because it at least looked partially mainstream and a lot less like his gory stuff that turned me off. Plus, Reeves on the comeback (again) following up John Wick with a low-budget genre entry? How could I not at least dip my toe into whatever cesspool Roth might have conjured up? 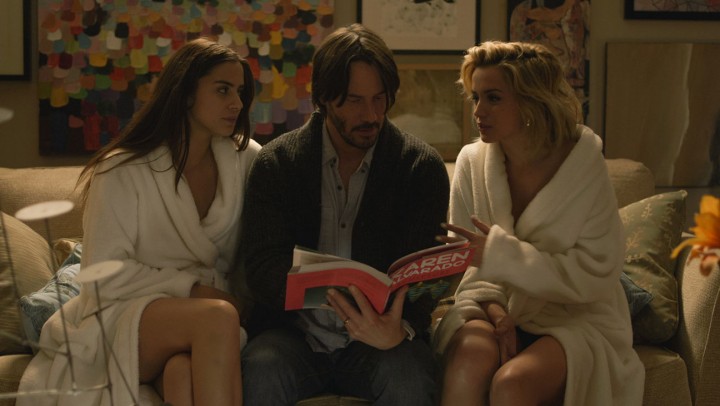 Reeves plays architect Evan Webber, a solid family guy who is left at home on Father’s Day, while his devoted wife (Ignacia Allamand) and their two kids go on a beach trip (which makes zero sense considering the weather forecast is about to become utterly shitty). Home alone during a storm, Webber is interrupted by a knock at the door; upon opening it, he meets two nubile young sexpots – Genesis (Lorenzo Isso) and Bel (Ana de Armas), who proceed to use his facilities and eventually seduce him. The next morning, the tables turn: the two girls begin to trash the house, and blackmail Webber into doing what they want, including torture, for refusal means telling his wife and kids about his infidelity.

Although it has a curiously prescient premise, Knock Knock never quite comes to grips with its various themes. Where it might have explored infidelity, where it might have wandered into the modern societal sense of isolationism, the film opts instead for cheap shocks and weak character plotting; I don’t think that was the intent, but it is most definitely the outcome. What begins as an almost Fincher-esque thriller, a slow-build of tension as Webber’s seduction by the two girls grips the viewer with anticipatory horror, becomes a routine, somewhat perfunctory modern horror flick, avoiding potential and replacing it with a largely formulaic sense of post-millennial cynicism. It’s a requisite, I suppose, for today’s horror films to tap into the social media generation’s shifting of responsibility, and sense of thrills via consequence-free violence, but Knock Knock seems like it works hard at avoiding burrowing deeper into legitimate interest.

The film’s raison detre is (at least, as far as I can tell), trying to humanize Keanu Reeves; for a while now, he’s been stuck in a kinda wooden, charisma-free state in most of his roles (even John Wick, to a degree) and it’s nice to see him…relax a bit. As Webber, Reeves is a flawed, but generally good guy. He doesn’t seem like a cheater, but the persistence of these two girls is probably a lot more than most men in similar situations could rebuff. Webber’s affable nature and initially skeptical response to the girls’ arrival on his doorstep is probably as believable an acting job as I’ve seen in him, so to see the film journey into a truly dark turn midway through, I really felt for the character, I truly did. Reeves sells it. 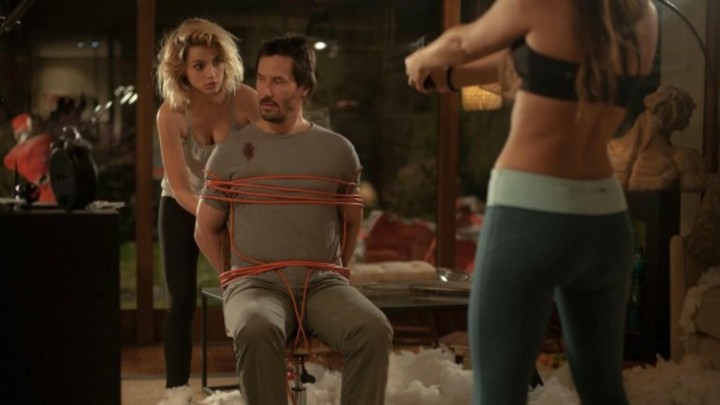 He’s abetted by Roth’s real-life wife Lorenza Izzo, as Genesis, and Ana de Armas, as Bel, who looks like a blonde Scarlett Johansson; both women play the coquettish part perfectly, involving flattery and suggestion, and effrontery in part, to seduce Webber as he flounders a bit with his own inadequacies. Neither actress really nails the non-sexy side of their characters – when asked to deliver a more nuanced performance, it’s Reeves who holds up the film rather than Izzo or Armas. Oh sure, they’re sexy and hot and all, but as dramatic actors, they lack the skill to give us genuine performances.

Frankly, this would have all been solved had Webber just slammed the door in Genesis and Bel’s faces. Okay, so that’s a stretch (and it woulda been a shorter film), but Knock Knock’s sense of menace, particularly in the second half, is utterly dependent on Webber’s restraint. Faced with shattering his marriage, Webber’s lack of intimidation is telling; yeah, he’s guilty of doing what he did, but you get the sense that his level of desperation to “not be found out” only stretches so far. Guess he’s a really good guy, after all. So when he’s held captive, tortured and humiliated, the film becomes a tiresome venture into masochism and depravity; although the “hole” Reeves finds himself in at the film’s conclusion – the girls bury him in a makeshift grave up to his neck – is both literal and metaphorical for Webber’s plight throughout the film entire.

It’s unusually intelligent from a director with so much unfulfilled promise – Roth’s Knock Knock had so much potential but comes away just mediocre. Sure, Webber’s no saint for his inability to control his penis, but rather than explore this kind of humanity, the film’s laughably diffident ending sees us none-the-wiser really other than it’s a riff on what happened to Liv Tyler and Scott Speedman in The Strangers. For all its terrific build up, the delivery of the “meat” of the film is largely anticlimactic. And unresolved. Knock Knock’s lack of torture porn graphic violence (other than a few  moments) is refreshing – it’s more a straight-up thriller than any of Roth’s previous films – and while the two girls have personalities that lack any form of development other than to be merely sadistic, the film does have some associated moments of brilliance tucked away within it. Sure, it’s not entirely clever, and has some plot holes and logic gaps that you might drive a train through, but I found Knock Knock to be a semi-decent effort that isn’t the wreck I was expecting.