Director :  Craig Zobel
Year Of Release :   2015
Principal Cast :  Margo Robbie, Chiwetel Ejiofor, Chris Pine.
Approx Running Time :   97 Minutes
Synopsis:   In the wake of a disaster that wipes out most of civilization, two men and a young woman find themselves in an emotionally charged love triangle as the last known survivors.

Man, I’d love to be stuck in a house with Margo Robbie.

Meandering, stately, ponderous post-apocalyptic drama, Z For Zachariah certainly means well. Boasting a trio of excellent performances, as well as a likeably rural tone, Zachariah’s dramatic impetus works well through its undercurrent of last-man-standing tension, driven by a good ol’ love triangle. Revolving around Margot Robbie’s slightly coquettish pastor’s daughter character, and held up by a magnetic Chiwetel Ejiofor, Z For Zachariah’s slow-burn heft will delight aficionados of this sub-genre of sci-fi (yeah, it’s sci-fi), but I can see casual viewers being left baffled by a film they weren’t expecting. 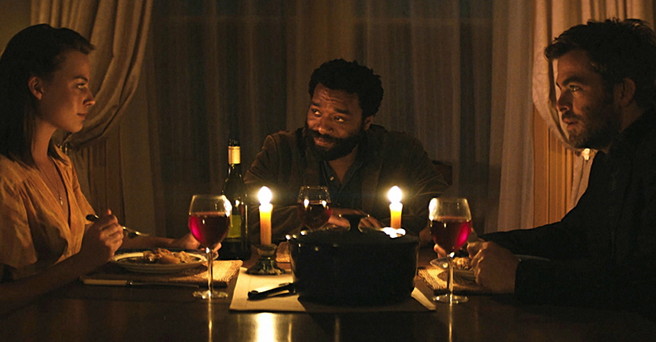 Young farm girl Ann (Margot Robbie) lives seemingly alone in a radiation affected post-apocalyptic world, safe in a valley which has managed to survive the catastrophe. Surviving the rough winters, and planting seed to grow food that isn’t contaminated, Ann stumbles upon John Loomis (Chiwetel Ejiofor), a researcher who survived the radiation after being inside an underground bunker. After rescuing Loomis from a radiation soaked pool of water, and nursing him back to health, Ann and her new fellow survivor work together to overcome their mutual situation. As the pair bond, it becomes apparent that inevitably they must procreate to further the human race. Before this can happen, however, a third survivor, Caleb (Chris Pine), shows up, a younger, stronger man who Ann takes a fancy to.

Although I never had this experience, I am aware that the novel on which this film is based was a syllabus book in many a high-school curriculum; the premise allows for an examination of humanity under adversity, similar in style to Lord Of The Flies, in many ways. Zachariah’s island motif, the radiation-free valley in which the trio survive, is bordered by an unseen danger of death, meaning all at once they’re stranded in the most beautiful parcel of land on Earth, albeit one they cannot leave. This isolation provokes the angst, the drama and the conflict as a flashpoint of humanity – the three disparate personalities of Ann, John and Caleb, all with their unique frustrations and desires, are representative of our own in many ways, so viewers will attach to whichever character they feel is the most alike to themselves.

There’s a level of psychiatry to be enjoyed here, as the bonds of friendship, attraction and, inevitably love, begin to form – it’s amazing how mutual adversity can draw people together – and although I found the film a little hard to “enjoy” (perhaps the term “endure” is more appropriate) from time to time, even at the darkest, the film’s humanity shines through. Zachariah is an appreciably different film from Craig Zobel’s previous effort, the extremely provocative Compliance, but its heartbeat is just as strong character-wise so I can see why he took the project on. 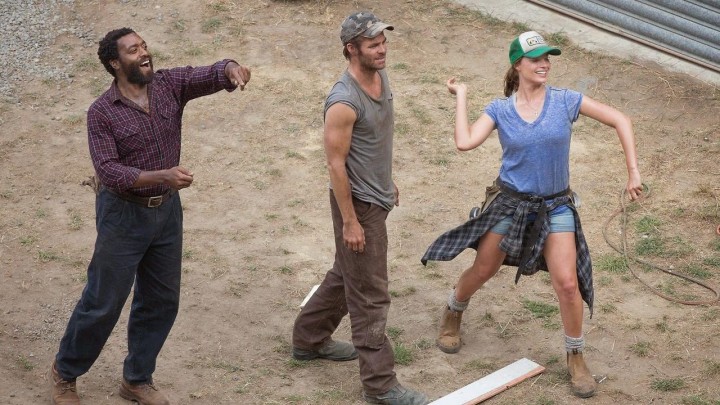 One of the aspects I liked about Zachariah was its inherent stillness; there’s not a lot of “action” here other than gentle farming, hunting, gathering and watching Ejiofor’s character get shitfaced off warm beer one day. Zobel’s direction is calm and resolute, containing a storytelling strength I think a lot of other directors might have lacked were they to take on this film. Whereas other genre projects tend to be either comedic (The Last Man on Earth) or a horror show (The Walking Dead), Zachariah’s compelling aesthetic is less about survival against nature and more about surviving other people. And when there’s only three in the whole dang film, that makes for some occasionally searing moments of tension.

The cast are uniformly excellent; Margo Robbie is a revelation as she shoulders much of the film’s innocence, as Ann. Robbie’s dirt-smeared portrayal of a young survivor is weary beneath a veneer of inner strength, while Chiwetel Ejiofor’s John is the quiet achiever in the face of adversity, and both do exceptionally well conveying emotion, particularly pain and anguish, with minimal dialogue. Z For Zachariah is a film that relies mostly on looks, glances, hidden subtext behind the eyes, than it does with apoplectic outbursts of frustration or rage. Chris Pine’s skittish Caleb, who appears friendly but brings out suspicions in John, is where the film lurches from a slow moving character piece to a suspiciously dramatic thriller, albeit one that remains glacial in speed. Pine has done whacked-out nutty, in Joe Carnahan’s Stretch, so his can-he-be-trusted, shifty sketchiness is rather restrained here, but he’s great in the part bringing unevenness to Ann’s relationship with Loomis.

I really liked Z For Zachariah, with its sense of quiet amid the sorrow. It’s a moving, at times electric piece of survivalist cinema, led by the trio of actors all working with their screen-time to bring out the best in both themselves and each other. Zobel’s direction is fluently solid, a commanding effort behind the camera to bring the characters to life beyond mere genre archetypes. You feel these people’s heartbreak, you don’t just see it. Now, some folks will have issues with the slow moving nature of the narrative, but I think Zachariah’s chief selling point is giving us the time to get to know these characters – much like Zemeckis’ Cast Away, which gave us Tom Hanks on an island for a solid hour or two, alone, Zachariah’s focus on character over situation or violence is where its great strength lies. Your appreciation of that will vary, no doubt, but I think it’s a strong film and a worthy entry into the apocalyptic canon.