Endlessly charming, mightily saccharine and often cloying with sentimental Americana, Forrest Gump is nothing short of an amazing, moving film. Centered around a wandering idiot savant, Forrest Gump’s insertion into and around major historical events within America’s late 20th Century manages to maintain an overriding sense of melancholy loss coupled with idealized hope, a hope that if a guy like Forrest can make it (albeit, luck and good fortune follow him around like puppies), then anyone can. Filled with countless pop-culture references, from the eponymous “Run Forrest, run!”, to the iconic “Life is like a box of chocolates”, Gump became one of those films it eventually became popular to dislike, simply due to its status within the film community. With a captivating performance by Tom Hanks, in the second of his back-to-back Oscar wins, and populated with dead-on impersonations and depictions of famous people throughout the era, Forrest Gump’s love-song mandate to an America now long gone is poignant, moving, and always enthralling.

Reverse-populist negativity towards Forrest Gump stemmed from its monolithic flooding of pop culture during the 90’s, as Hanks’ ubiquitous dialogue and faultless portrayal of the titular imbecile-made-good became something of a touchstone for a United States working itself from the shadows of the Gulf War, as well as Bill Clinton’s Presidency of the time. Overly sentimental, almost to a fault, Zemeckis’ masterful cinematic telling of Winston Groom’s popular novel remains divisive as to its worthiness to take home Best Picture, particularly when it was up against The Shawshank Redemption and Pulp Fiction (among others), two films which could rightfully have taken the title and nobody would have put up a fight.

Hanks plays Gump with just the right level of idiocy – Gump has a low IQ, has trouble with his legs, and is somewhat like Sheldon Cooper in that he’s not exactly aware of things like sarcasm and irony. His mother, a wonderful Sally Field, is straight-up supportive of her son regardless of his limitations, giving him a gamut of life lesson, motivational-poster sayings to help him work through his relatively poor upbringing in America’s deep south. Forrest’s only real friend is a girl named Jenny (played as an adult by Robin Wright), who never sees Forrest as anything more than a childhood friend, even though Forrest obviously holds a very large candle for her. Jenny’s parallel journey through America’s darker moments – she’s involved with the Black Panthers and protesting against Vietnam, among other things – contrast wonderfully with Forrest’s haphazard bumbling. Gary Sinise plays Lieutenant Dan (although, if you’re careful, it’s pronounced “Day-un” for most of the movie), one of Forrest’s commanding officers in the Vietnam War, and who becomes a double-amputee and spends a great deal of the film being angry with the world for his lot in life.

As Gump grows up, and joins the army and goes to Vietnam, becomes a football star, runs across the country multiple times for two years, becomes a shrimp-boat captain and makes a fortune through sheer luck, buys shares in a formative Apple and makes another fortune through sheer luck, and eventually tries to reconcile with the rebellious, angry, distant Jenny, the story occurs mainly as flashback, with Forrest retelling his life story to complete strangers, some of whom don’t believe him, whilst sitting at a bus stop. Zemeckis weaves Forrest’s life into major cultural events, such as the racial desegregation of the US, Watergate, Elvis’ arrival as a rock sensation, multiple talk show appearances and a slew of minor chucklesome gags that work more often than not – did you know, Forrest inadvertently helped the guy who made the “shit happens” stickers? Yeah, that too.

Zemeckis’ preponderance for digital technology is rampant here, as he inserts Forrest into archival footage of just about all the major events in American post-war history; he pops up in the White House chatting with Presidents Kennedy, Johnson, and Mr I’m Not A Crook, vaults into a seat next to John Lennon for a chat-show, and appears in the background of Orval Faubus’ famous stand against racial integration at Little Rock. Within the context of the film this whole idea that Forrest inadvertently arrived at pivotal moments in American history works well for the film, giving the basic plot a sense of compounded strength through association, and yet some decry these moments as “quaint” or too obviously contrived. Personally, I like the way the story weaves in and out of real-world events. The digital foolery still holds up today, too, for the most part; aside from Forrest’s famous showing the President his ass, I think all these scenes work well. 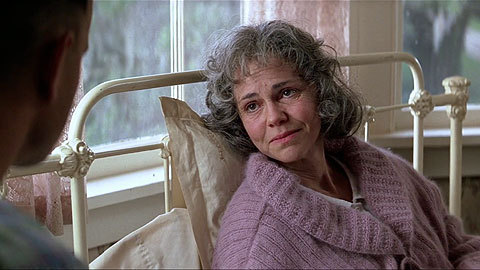 The culmination of Forrest and Jenny’s trans-continental and multi-decade friendship is one in which we’re given the undeniable treat of one of cinemas saddest moments; Hanks’ monologue to Jenny’s grave is one that makes even the toughest man crack, a bottom-lip-trembling eruption of all of Forrest’s dim-witted ambulatory mind-dumps as he mourns the loss of his great love. naturally, this comes just after the reveal that Forrest has a young son (one of the film’s most tender scenes, as we meet a very young Haley Joel Osment in his feature debut), which tugs at the heartstrings more than once. The great thing about Forrest Gump is that the film earns those tears, it earns those moments through carefully constructed development of Jenny and Forrest throughout the preceding narrative.

I’m not ashamed to admit that I found Forrest Gump to be a marvel of a film; I still do, even all these years later. There are those who find its heart-on-sleeve representation of America’s past to be perhaps a tad simplistic, even jingoistic, but in its fairy-tale aesthetic in depicting the passing of time and social change throughout the United States during the latter half of the 20th Century, the film works. We’ll argue the merits of this film and Shawshank until the cows come home, I suspect, but it’s equally a worthy winner in the Best Picture category.