Director :  Roger Donaldson
Year Of Release :  1997
Principal Cast :  Pierce Brosnan, Linda Hamilton, Charles Hallahan, Elizabeth Hoffman, Jamie Renee Smith, Jeremy Foley, Grant Heslov, Arabella Field, Tzi Ma, Bill Bolender, Peter Jason.
Approx Running Time :   109 Minutes
Synopsis:   A vulcanologist arrives at a countryside town named Dante’s Peak after a long dormant volcano, which has recently been named the second most desirable place to live in America, and discovers that Dante’s Peak, may wake up at any moment.
What we think :  Takes a while to build up (a little like the titular volcano!) but once things erupt (ha!), the film is cataclysmic. Utilizing the best effects Hollywood money can buy, but brought low by daffy characters and liberal use of fudge-science, Dante’s Peak is hugely entertaining Guilty Pleasure film-making that does its job but not much else.

Bond Versus The Volcano.

Although missing his trademark suit, martini or Austin Martin, Pierce Brosnan’s mid-Bond star power was enough to pull Dante’s Peak, a 1997 disaster film accompanying the Tommy Lee Jones LA-set Volcano into cinemas in the same calendar year, into one of the year’s biggest earners. Much like Armageddon and Deep Impact did for asteroids, one film takes itself utterly seriously, while the other goes for the lighter tone of fun and tongue-in-cheek disaster. If Volcano took itself seriously, Dante’s Peak has that knowing wink to the audience that this is pure fictional bullshit, a superficially accurate depiction of volcanic violence writ across the widescreen ratio of blockbusterism and commercial disaster-porn. Well before people started taking fiction so seriously (Man Of Steel, ahem), and before 9/11’s seismic shift of disaster depictions, Dante’s Peak was a vacuous, unilaterally cheesy action flick that was sold on the premise that, at some point, a volcano was going to erupt and all hell was going to break loose.

Brosnan plays volcanologist Harry Dalton, who becomes concerned with readings around the long-dormant mountain volcano near Dante’s Peak, a small town in Washington State, USA. Together with his team, Dalton becomes concerned enough to try and warn the town, including local Mayor Rachel Wando (Linda Hamilton), although initially their worries are scoffed at – a little like Amity Island in Jaws, Dante’s Peak’s resident need summer tourists to survive, and naturally the volcano is rumbling just as the tourists are starting to arrive en masse. Eventually, the volcano begins to erupt, sending the town into a panic. As disaster begins to surround them, Dalton and Wando must do all they can to escape the raging inferno, although their escape is hampered by human concerns and, naturally, nature’s fury in the form of lava and suffocating ejecta from the mountain.

I alluded to Jaws earlier; Dante’s Peak follows Spielberg’s classic formula to a T. First, it lays the groundwork on giving the lead character – in this case, Harry – a tragic backstory for motivation, with his wife killed in a volcanic eruption prior to the main story of this film occurring – before placing our hero in a predicament where nobody will believe that the readings he’s getting from the volcano are real or even anything to be concerned about. In fact, if you supplanted Harry Dalton for Roy Scheider’s character from Jaws, you’d probably have made almost no change to the emotional crux of this movie. Then, naturally, when things seem relatively calm and in control, the volcano erupts, spewing its destructive power onto the hapless humans below. It’s a formula, and in 1997, the formula worked. 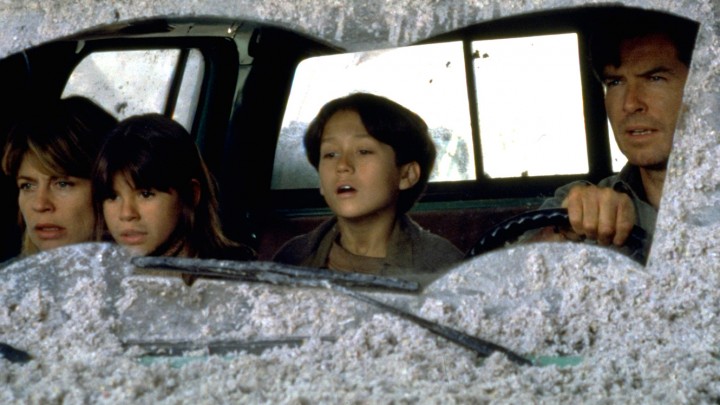 Dante’s Peak is a methodically slow build-up of human stupidity and fallible commercial interests overriding basic human safety – the Jurassic Park method, really, where nobody believes the scientists or the doomsayers until it’s waaaaaay too late. Eventually, you know the volcano is going to explode, and when it does, the film picks you up and slams you into your seat. Everything prior to the mountain going bang is hokey, scientific mumbo-jumbo about the way volcanoes work; a lot of plot exposition is given which is so obviously alluding to events the film will depict in it’s second half, and cynical viewers could claim inane scriptwriting without being contradicted. But consider that not everyone knows how volcanoes work, and the film needs to set up some kind of understanding between the audience and the character, so you can anticipate the stuff that’s on the way.

No doubt the film’s eventual box-office was hindered by the critical and commercial flatline of Volcano a few months earlier, but Dante’s Peak is a far better film. Brosnan, working at the peak of his James Bond powers, provides a more than capable leading man against Terminator franchise’s Linda Hamilton, who is stuck in a limited, undemanding role as the town’s Mayor. Although the film tries to shoehorn in a romantic subplot (which doesn’t work), Brosnan’s character remains as elusively derivative as any other in a 90’s action flick, and although the actor works to make his part convincingly human, when you throw it against the raging inferno of lava and fireballs it kinda pales into insignificance. 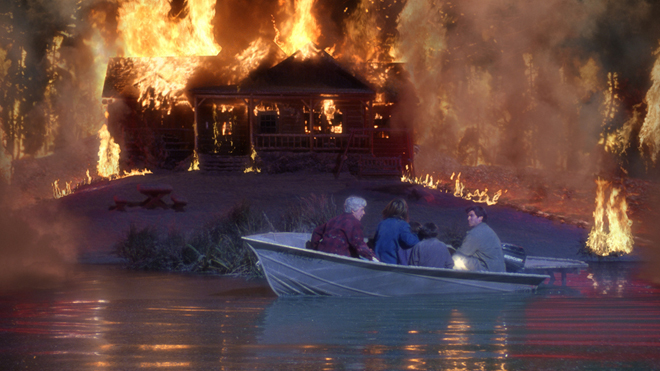 Dante’s Peak, characters aside, delivers on destruction. Once the volcano erupts, the film rips into action, a sonic and visual assault that barely lets up for a moment. Destructive, concussive blasts of visual effects, both practical and CG, obliterate the town, and while the film’s detour into the eye-rollingly inexplicable “rescue the stranded elderly person” subplot do make one grit one’s teeth here and there, the end result of Roger Donaldson’s focus on carnage is one of utter enjoyment that it’s not happening to us. Donaldson, who is better known as the director of The Bounty, Tom Cruise’s Cocktail, and the Kennedy-era thriller Thirteen Days, helms this film with assured measure, allowing his patently ridiculous story and the characters within it to do what they must before he draws the bowstring taut, and lets the pressure cooker of anticipation explode like a virgin on his honeymoon.

Dante’s Peak isn’t an intelligent movie, now is it trying to change the way you think about volcanoes. Nope, it’s a rock-solid (pardon the pun) adventure thriller, a subwoofer-testing farce of a disaster flick the likes only Hollywood can produce. Slick, well mounted, and featuring still-okay visual effects (the pyroclastic cloud obliterating the town is still gasp-worthy) and an early James Newtown Howard score, Dante’s Peak is a fun piece of eye-and-ear candy that taxes the grey matter naught but for the silliness of it all. File it under guilty pleasure and enjoy.