Director :  James Cameron
Year Of Release :   1994
Principal Cast :  Arnold Schwarzenegger, Jamie Lee Curtis, Tom Arnold, Charlton Heston, Tia Carrere, Art Malik, Eliza Dushku, Grant Heslov, Marshall Manesch.
Approx Running Time :   141 Minutes
Synopsis:   A fearless, globe-trotting, terrorist-battling secret agent has his life turned upside down when he discovers his wife might be having an affair with a used car salesman.
What we think :   Blockbusting action classic still holds up – although misogyny and infidelity do take some of the fun out of it, especially in a glacial middle act – and delivers rousing Arnie/Cameron antics on a scale most genre entries can only dream of. Arnie has almost never been better, Jamie Lee Curtis sexier, or Tom Arnold more bumbling: True Lies remains an outright gem that works superbly when all cylinders are firing.

Leonard Maltin once described True Lies as “the grandaddy of all action movies”, and I think that’s a reasonably accurate assessment of the film. Any film where a nuclear bomb going off is given such short thrift (it’s almost an afterthought here) to concentrate on a vaguely racist terrorism plot, contorted infidelity and shunting Jamie Lee Curtis into a bra and panties for one of the screen’s sexiest stripteases ever, deserves to be labelled a classic. Although mis-prioritization of plot details is a key fault in True Lies’ full-blooded, testosterone-injected mandate of “bigger, bigger, no, go bigger“, and the fact that time hasn’t been kind to the film’s nationalistic sense of justified violence, James Cameron’s action masterpiece is a bludgeoning of explosions, gunfire, Harrier jet extravagance and really awful comedic timing. 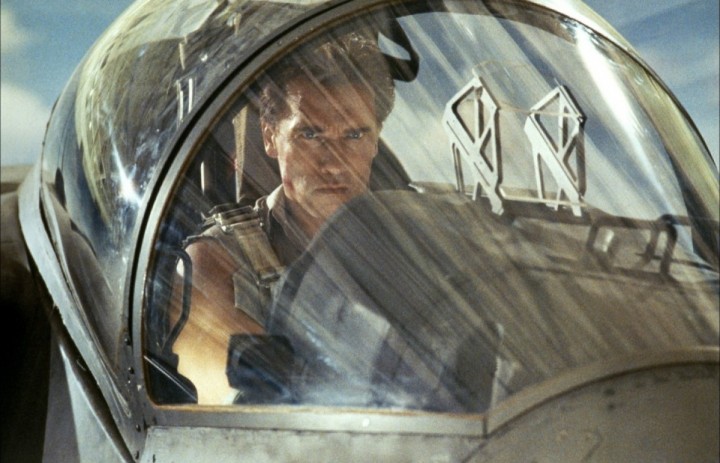 Big Arn plays Harry Tasker, a deep cover spy for the US Government, leading a double life as a “computer salesman” to protect his friends and family. However, when Harry begins to suspect his wife, Helen (Jamie Lee Curtis) is having an affair with a used car salesman (Bill Paxton), which conflicts with his current mission to stop a terrorist arms dealer, Salim Aziz (Art Malik) from detonating a nuclear weapon, he must try to reconcile the two while keeping those he loves most from being killed.

I always thought True Lies was America’s answer to James Bond. Although the British agent would likely baulk at ever revealing his secret identity to any potential wife, True Lies’ dual narrative thrust of a possibly unfaithful spouse – while Harry himself is “unfaithful” with respect to the truth of his job – is given often hilarious, occasionally misogynistic breadth by the wonderful screen team of Arnie and Jamie Lee Curtis. The secret agent plot of the film is as potted cliche as possible, although with everything so amped up to 11 with explosions and gunfire, there’s little doubt that the film is an utter parody on Bond, while also a cavalier blockbuster event film only James Cameron could pull off.

There are so many problems with this film, it’s hard to know where to start. From its startlingly racist depictions of “Arab terrorists” (the film was made in the early 90’s, before the events of 9/11 and the social realignment of Middle-Eastern racism) to its overtly sexist and misogynist overtones, to its often lame-duck humor, True Lies has a general reek of a film firmly rooted in the time it was made. Hardly Birth Of A Nation, but still wantonly egregious in offense in some parts. Also, Tom Arnold, so there’s that.

True Lies is at its core a spy thriller – the film is a loose remake of the French movie La Totale! – and an action film, with its main plot revolving around Harry Tasker’s mission to thwart the plans of Salim Abu Aziz and his zealotry. Intertwining the subplot involving Helen and her possible lover, Simon (a hilarious Bill Paxton, once more delivering lines which have entered into pop-culture) Cameron’s script is a go-for-broke essay on the unstoppable nature of action hero cliches mixing comedy with violence; Tom Arnold’s Gib, part of Harry’s spy team (alongside Grant Heslov, who spends most of his days now working with George Clooney on their film projects) provides much of the film’s mumblecore laughs, a hyperactive aide who has the potential to ruin a mission with glib asides, but who works best as Moneypenny to Arnie’s Bond. Tia Carrere has a nice role as a super-sexy terrorist accomplice who double-crosses Harry, mirroring the Simon/Helen plot without any payoff.

The film is a three act production. The first act sets up all the players, showing us their disparate worlds and set the events in motion: Harry’s routine “job” of computer sales provides Helen with an “out” to maybe, sorta, kinda see a guy on the side, while Harry’s at-all-costs duty to his nation’s security offers a contrasting sense of values. Harry’s daughter, a young Eliza Dushku, sees her father as a walking ATM and embarrassment, and Harry’s boss, a lengthy Charlton Heston cameo, just berates him to get the job done. The second act is all about Harry and Helen’s relationship, namely via the Simon subplot, which sees Helen “captured” by an illegal and unnecessary raid by Harry’s team and “interrogated” (in the most frightening manner possible), before being asked to perform some “spy” stuff of her own, a flip-out on Harry’s own work as an agent. Cameron must have found this hilarious to write, but on screen (especially nowdays) it dies a bit of an awful death. Harry’s decision to make his wife strip for his own amusement is sexist and horrible, a joke I think worked back in 1994, but certainly not now.

The third act, where Harry’s reveal to Helen the truth about his real job, and the continuation of the terrorist arc, brings the film to its dramatic – and in my opinion, best – conclusion. The final thirty minutes or so of True Lies are vintage James Cameron; harrier jets blowing up major US highways, narrow escapes, a nuclear bomb explosion, a massive gunfight between terrorists and said harrier jet within a major city building, and naturally, as many Arnie one-liners as we can get. 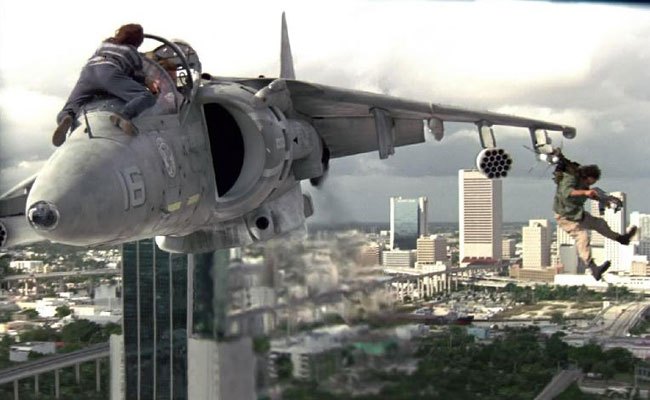 Populated with as many visual gags as possible (incompetent terrorists trying to launch a RPG at one of the jets, is particularly funny) and using the best CG, model-work and actual in-camera effects that money can buy, the finale of True Lies is worth the mid-film slog to get to. It’s little wonder the film became a major go-to demo disc on LaserDisc, and no doubt the BluRay (whenever that’s coming) will once more remain a favorite.

If it sounds like True Lies is a bad film, I apologize. It’s not a bad film, in the sense that the characters are awful or the story is indifferent, or Cameron’s direction is sub-par: that simply isn’t the case. True Lies is a blast of high octane, large scale action extravagance, a lengthy Die Hard-esque film that allows Cameron and Arnie to up the destructive amperage and deliver full wattage devastation to all that surround them. Arnie is a terrific lead – the part suits his screen presence to a T – and Jamie Lee Curtis has never been sexier (albeit in a woefully bad female character role), so if it’s out-and-out action you want then True Lies will satisfy you. It’s the tone that’s all wrong. Occasionally the film dips into a weird mean-spirited sense of schadenfreude, and in the post-millennial PC world, that brings with it some minor awkwardness.

True Lies is rightly a classic. Sure, it hasn’t aged terribly well at a political level, and with overt stereotyping of race and sex bubbling away just beneath the surface, some might take issue with Cameron’s broad brush-strokes of cliche. But for bombast, fun and a sense of one-upmanship with the then-reboot-ready Bond franchise (GoldenEye came out a year later), True Lies is hard to pass up.