Out of war comes love?

The origins of Suite Française are almost as tragic as the story within it; French writer Irene Nemirovsky envisioned a five-novel series, only two of which were completed before she was rounded up and sent to the gas chambers of Auschwitz, where she died, in 1942. The novels and notes made by Nemirovsky were published only after discovery in 1998 (yeah, some 60 years after the writers death) and, naturally, made into a film. Wartime novels hold a hugely important place in history, as Anne Frank would attest had she lived to see her diary turned into one of the 20th Century’s most important publications. Not only do they work as aspirational tomes of freedom or fantasy, they provide a glimpse into a world far too few people remember these days, as the waves of time slowly, inexorably, smooth away the raw pain of one of the planet’s deadliest global conflicts. Suite Française offers itself as a romantic melodrama, but, in light of a distinct lack of genuine passion, works better as a depiction of social fracturing when an invading force usurps control of a democratic country – and a small French town. 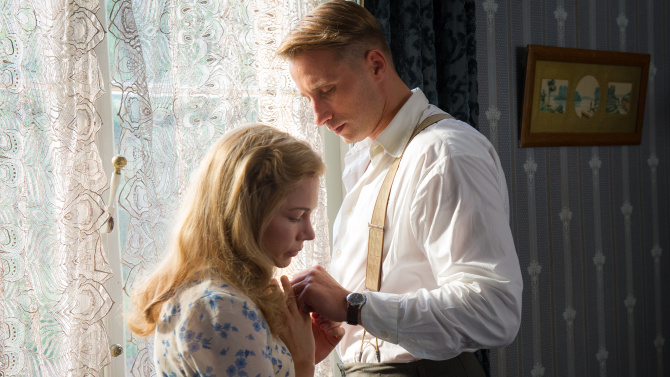 It’s 1940, in Bussy, central France, and the shadows or war loom over the town. Refugees from Nazi-occupied Paris are swarming south to escape the conflict, while German planes bomb trains and those fleeing. Bussy resident Lucille Angellier (Michelle Williams) lives with her mother-in-law, Madame Angellier (Kristen Scott Thomas), a domineering and piously uptight landowner who despairs her son’s absence to fight the war. When the Nazi’s arrive in town to stay, they are billeted amongst the townsfolk; the Angellier house sees the arrival of Commander Bruno von Falk (Matthias Schoenaerts), a man to whom Lucille finds herself attracted in spite of him being the Enemy.

Suite Française is predicated upon the idea that the Nazi’s were all a bunch of murderous psychotic assholes (and, in general, you could argue that to be true), but a lot of them were not. A lot of those conscripted to the German army during World War II were answering the call of their Government (rightly or wrongly), and although time hasn’t been kind to the depiction of these men as anything other than monsters, this film portrays at least one of them as an actual human being, rather than as a cruel and inhuman assholes. Schoenaerts, as Falk, finds himself smitten with Lucille, and she with him – against her better judgement – and with both their respective partners no longer in the picture, it would seem only natural they find solace in each others’ company. 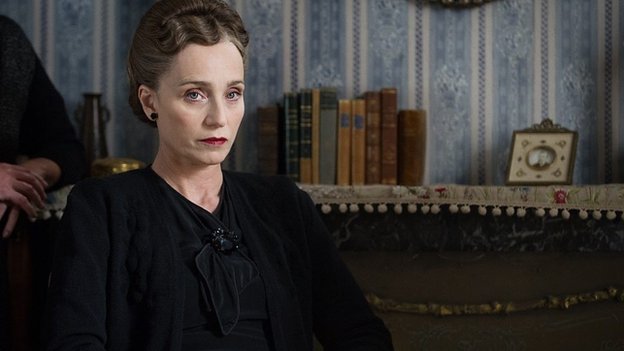 Problematically for the film is that it doesn’t seem assured of its focus: is it a wartime romance, or is it some kind of ensemble statement on social unrest and disorder? I’m not quite sure, for the romance angle is underplayed when it needs to boil, while subplots involving various other Germans (the bad kind) draw out unnecessary cruelty and emotional haranguing. There’s a tonal mismatch here that doesn’t quite work itself out, and I’m unsure if it’s the direction or the screenplay. The script is credited to director Saul Dibb and British playwright Matt Charman, and although tinged with melancholy, sorrow and more than enough interpersonal angst, the film’s scope outweighs its ability at times, with uninteresting characters and scenarios continuing to move into the main narrative and vacillating between intense propagandist reactionism and syrupy, inflated melodrama.

One of the most egregious aspects of the film is its “incompleteness”. The fact that the original story was never finished due to the author’s demise at the hands of the Nazi regime, seems to have translated into a conclusion to this film which feels… well, unfinished. Suite Française has the hallmarks of the opening episode of an HBO miniseries, without the series to back it up. There’s a sense of weak finality to the relationship between Lucille and Falk that isn’t earned, replaced instead by a gormless voice-over and some melancholy closing title cards establishing the story as being incomplete in reality. I’m unconvinced a more solid conclusion could have been cobbled – this isn’t that great a love story that something couldn’t have been found to give the film a bigger oomph at the close. Perhaps it’s the cynic in me that can’t see the larger picture, the picture that says the lovers can’t be together because of political ideology driving them apart, and the picture that says the “never see each other again” tragedy is of the most romantic kind. Bollocks. Suite Française is an unfinished concerto, a Schubert’s 8th Symphony, if you will, and the decidedly downbeat conclusion greets one with mixed emotion.

Saul Dibb’s direction is really rather nice, tone aside. The film has a grandeur and intimacy that work well together, contrasting between the love plot and the violence and intimidatory invader subtext. The film’s muted color palette provides a gradated greyish hue whenever the Nazis are on-screen; otherwise, the film has a bright, highly saturated look that captures the change in a nation’s emotional state once the invasion is complete. Progressively atmospheric, Suite Française captures the sadness the world must have felt during the darkest days of the War. The film’s score is suitably dramatic, by Rael Jones, and both the editing (Chris Dickens) and camerawork (Eduard Grau) are first rate. 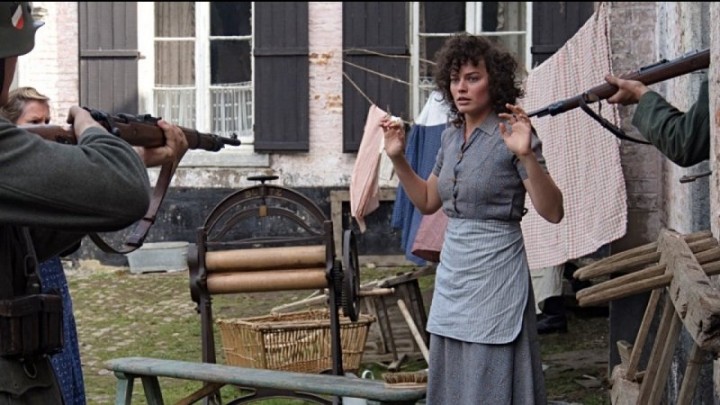 As is the case with most “prestige” film project, the large cast are uniformly excellent. There’s nary a bad performance to be seen; Michelle Williams shoulders a large portion of the internal tension the film carries, while the rest of the supporting roles personify the Nazi cruelty, the horrors of what each man is asked to do in the name of their various causes. Schoenaerts has a better role here than he even had in Far From The Madding Crowd, and as Falk he’s resiliently human. Although comparative reviews will suggest Schoenaerts makes a fascinating leading man, opposite both Williams and Madding Crowd’s Carey Mulligan, he’s got screen chemistry up the wazoo. Ruth Wilson plays a fellow villager who finds her husband (Benoit, played by Sam Riley) a fugitive, while Lambert Wilson (The Matrix Reloaded) has an affecting role as Bussy’s Viscount and Mayor. Kristen Scott Thomas’s role as Madame Angellier is right up her alley – the character is as frigid and obsessed with rules as any she’s played previously, a stick-in-the-mud who values propriety over human indignity. Aussie star-on-the-rise Margot Robbie has a nothing role as a local French girl who has sex with a German soldier.

Suite Française is filled with promise and edgy melodrama, and generally delivers on that promise. Although the film’s tone does drift between soap-opera romance – which is wholly unfulfilling – and wartime drama, the problematic malaise that settles over the film’s midsection reduces both arcs in their potency. At its heart, Suite Française is a weepy, tear-jerking love story, and one which women everywhere will likely sob at (I didn’t, but I’m a dude and this shit is annoying), but for emotional weight and resonance, the film is a tad shallow.