Director :   Jean de Segonzac
Year Of Release :   2001
Principal Cast :  Edward Albert, Alix Koromzay, Bruno Campos, Will Estes, Gaven E Lucas, Jon Polito, Jody Wood, Jim O’Heir, Brian Leckner.
Approx Running Time :   92 Minutes
Synopsis:  The Judas Breed return, this time evolved to even more human-like qualities, and are intent on wiping us out.
What we think :  Generic, by-the-numbers sequel owes more to Guillermo del Toro’s original than any kind of creativity of its own, and is devoid of the creepy, shocking horror that made Mimic so evocative. Interminably directed, lacking polish or fluidity – the editing is garish at best – Mimic 2 is worth a look only for fans of the original.

You know how the opening scene of a film is supposed to entice you in, set the scene for whatever events are about to transpire? Great films have powerful opening sequences – think Once Upon A Time In the West, or Wes Craven’s Scream, or the first five minutes of Star Wars – that give the audience a shock or sense of space about what’s to come. Mimic 2 tries to have a solid opening scene, one involving an old Asian dude, a creepy tall dude, plenty of New York steam, and terrible editing. Sadly, the sequence isn’t great, and never once induces either terror or thrills like it is supposed to. Even sadder: the rest of Mimic 2 suffers the same fate.

Remy Panos (Alix Koromzay, returning from the original film, where she was Mira Sorvino’s assistant) works as a teacher, and is having boyfriend problems. New York Detective Klaski (Bruno Kampos) is have dead-people-turning-up-with-no-faces problems. The Judas Breed, the creatures in the New York sewers from the events of Mimic, have resurfaced, with one of the Breed targeting the many men in Remy’s life, including the school’s Janitor, a thuggish wannabe boyfriend, and – because that’s how these films work – Detective Klaski. As Remy realises that the Judas bugs aren’t all dead, and that a survivor wants to mate with her. Meanwhile, a group of Government operatives, led by Darskuit (Edward Albert), are also pursuing the creature for their own sinister purposes.

Perhaps I’m asking too much of a film sent straight to DVD rather than given a cinematic release, but then again, perhaps not. Made on what was a shoestring budget, Mimic 2’s lack of name actors, or a script decent enough to offer the most mild of chills, make for a trudging, often insipid viewing experience. The film opens on the basis that you have a passing memory of Mimic’s events, and really doesn’t try very hard to build up any tension or scares. 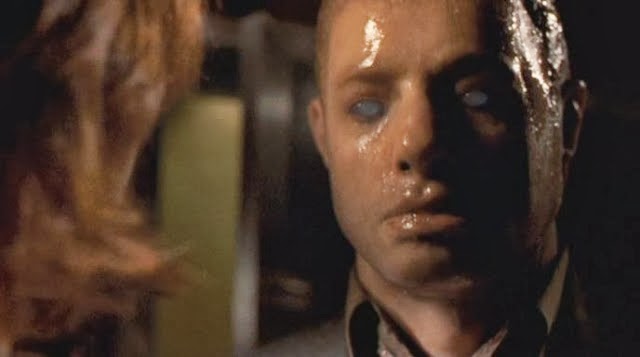 The numbing dialogue and vastly misogynistic tone of the screenplay are abortive genre cliches, and the central premise of the Judas Breed’s motives in this movie are obvious to anyone who watches an early scene with Remy describing instectoid sexual habits. Reading the credits of screenwriter Joel Soisson, I’m hardly surprised at the level of quality in Mimic 2’s abbreviated shorthand vernacular, with almost no tension other than jump-scares and the Judas bug’s inherent creepiness.

Mimic 2’s director, Jean de Segonzac, is better known for his television work, and it’s a sad fact that this film isn’t very cinematic – it’s like a larger budget of a television show, and Segonzac isn’t able to give the film any kind of heft – perhaps he was too constricted by the budget, but Mimic 2 has almost no time to gestate the atmosphere before it goes for jugular carnage. There’s no development, no acclimation to the premise, no foreplay – Mimic 2 is all orgasm. Alix Koromzay’s Remy is given the lead here, with no explanation as to the absence of either Mira Sorvino or Jeremy Northam from the previous film, and although she’s a competent actress, the development of her character is insipid. In true B-movie style, she’s a bit of a hopeless case with the men in her life, a nerdish, booking academic who, weirdly, doesn’t see the bigger picture of the film’s story until it’s well too late.

Koromzac is supported by a cast of names most of you won’t know. Edwards Albert, as the sinister DOD agent, Darksuit, is better known for his role as Shirley McLaine’s son in Guarding Tess, while Will Estes, who plays drunk teen Nicky here, is currently on screen in Tom Selleck’s cop series Blue Bloods. And Bruno Campos, as Klaski, has the distinction of playing a Disney Prince – Prince Naveen, in The Princess & The Frog – and a recurring role on Nip/Tuck. 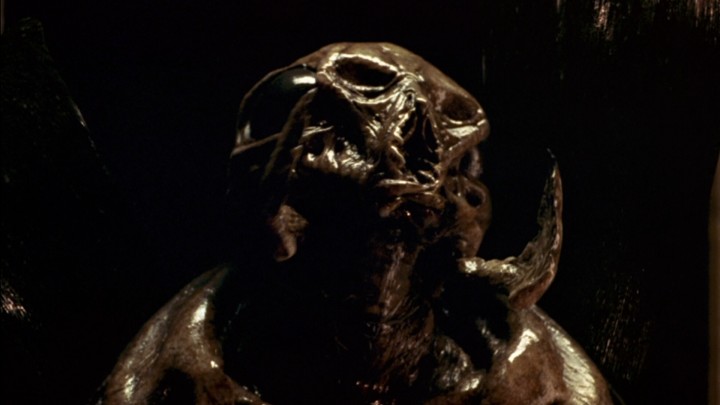 The cast do their best, amid flashing strobe lighting, constant fog, and oppressive shadows and darkness. But this isn’t the film for developed characters of emotional weight – it’s screaming, gore and occasionally sweet visual effects.

Similar to Mimic, the sequel uses a lot of practical effects for the Judas creature, which works well for the film’s overall aesthetic. The bug’s instinctual habits are well designed (it keeps building “walls” of chairs down the school corridors it’s infested) and the physical impact it has on the screen is largely excellent. But the inert editing – the film was chopped by Furious 7 and Insidious 2 editor Kirk Morri, whose work here is perhaps hindered by both the acting and the direction – lacks fluidity and cohesion, a rudderless cobbling of images and framing that jars more that it’s effective. I guess for the $10m budget, Mimic 2 isn’t dreadful, but without this as a consideration most will find the film a fruitless, destitute appropriation of del Toro’s concepts that feels like a poor man’s James Cameron effort at a sequel.

The film borrows too liberally from the previous film to stand on its own, although the line between homage and plagiarism is a grey one indeed. It lacks grace, lacks nuance – Mimic 2 is largely bland, using the rapid click-click sound effect to try and ambulate the tension and failing mostly, and while the end result furthers the franchise’s narrative to some degree, the voyage to do so isn’t worth the time invested in getting there. If you’re a fan of the original, Mimic 2 might be worth one look, but it’s a mostly forgettable affair that offers only minor moments of entertainment.