When nature and science don’t mix.

The first time I saw Mimic in the cinema, I had no idea who Guillermo del Toro was. But I could sense big things happening with him. Knowing now what I didn’t then, del Toro became a household name for a few months several years ago after being tapped to helm the then-two film Hobbit project, a project which would firmly entrench him in pop-culture references (he eventually left the project under difficult circumstances). Blockbuster film came to del Toro with Pacific Rim, but the director will be best known for his early gothic horror films including Cronos and Mimic, as well as later efforts like Pan’s Labyrinth and The Devil’s Backbone. Folks unfamiliar with del Toro’s work would be best served checking out Blade II, as a fine example of a sequel that delivers top-notch story and character, while maintaining a wholly different tone to the film it originated from. But what of Mimic, only his fourth feature film as director; moody and atmospheric, it delivers a template look at what the man’s career would consist of in both aesthetic and motifs. 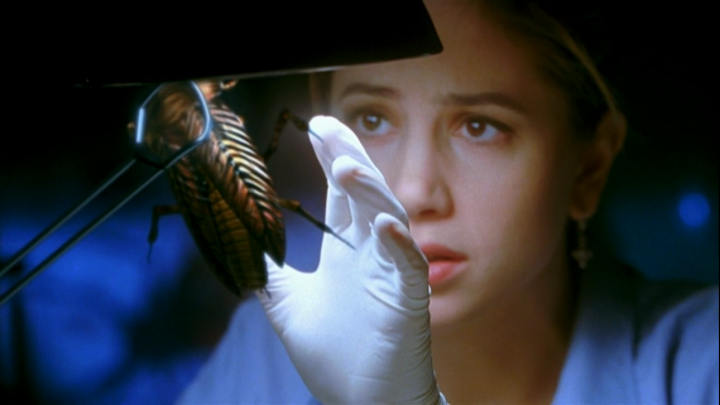 After New York City’s Manhattan Island has an outbreak of a deadly epidemic of “Strickler’s Disease”, which affects almost all the children in the city, entomologist Susan Tyler (Mira Sorvino) is called upon to find a cure; she invents another creature to combat the carrier of Strickler’s, the common cockroach. Named the “Judas Breed”, the new species effectively wipes out the infected cockroach population, thus preventing further outbreaks and saving thousands of lives. Years later, and heralded by the scientific community, Susan and her husband, Peter (Jeremy Northam) find themselves confronted with an unfortunate reality: the Judas breed creatures they released into the sewers of the city have transformed into menacing creatures hell-bent on wiping out their only known predator – humans. Together with CDC Officer Josh (Josh Brolin), subway cop Leonard Norton (Charles S Dutton) and heartbroken shoeshiner, Manny (Giancarlo Giannini), who is searching for his missing son (Alexander Goodwin) head beneath the streets of the city to uncover the mystery of disappearing people, only to confront creatures from their worst nightmares.

Mimic works on a number of primal levels. Sure, it’s a scare-flick designed for many boo-moments, but underneath its layer of jump-to-the-roof reveals, there’s an icky, creepy undertone of insects about the story that will hook the most paranoid acaraphobe. Cockroaches are inherently gross, even in their biological usefulness, and human’s entrenched disgust of the tiny creatures manifests as they grow larger in this movie. It’s a bug film, kinda like Arachnophobia, only with bugs. Giant, man-shaped bugs. Throw in people’s fear of dark, underground, confined spaces (which is most people, I’d say) and you have a compelling, riveting aesthetic in which to thrill audiences. So you have the one-two-three punch of the traditional horror genre,  Gothic body-horror and a creature feature: a more pungent, evocative mix there is yet to be. 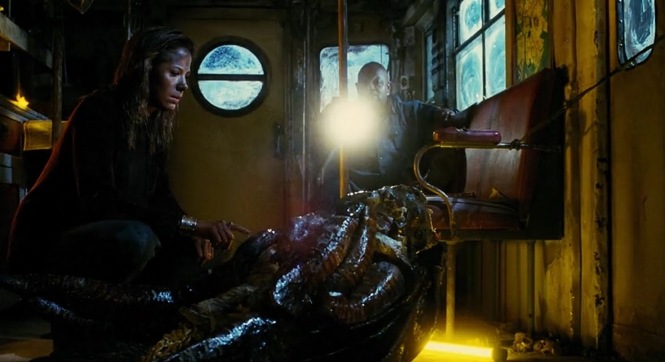 Mimic’s script is based loosely on a short story by Donald Wolheim, and written by del Toro and Matthew Robbins; the premise is the main selling point, and although a fair bit of input into the central characters seems to have been given, the end result isn’t as cohesive as del Toro perhaps expected. The story is primarily about Susan and Peter, but the ensemble nature of the plot, involving several high profile actors including F Murray Abraham (Amadeus), Josh Brolin (Oldboy) and Charles S Dutton (Alien 3), reduce the emotional arc of both Mira Sorvino’s role, and that of co-star Jeremy Northam. This minimization isn’t terribly problematic, largely because the film is constructed on its visual cues, a murky, dread-infused shadow-world of subterranean horror. Del Toro has fun with his vaguely Alien-esque icky creature design, a moist, animalistic amalgam of insectoid perfection and monstrous horror. In this sense, even though Mimic doesn’t have great character development, tapping into philosophical pontificating vis-a-vis evolution versus genetic manipulation, and the responsibility thereof, the blanket of unseen dread suffocating the majority of this dark, dark film will grab any viewer, no matter their disposition, and drag them screaming into the dark.

This is also a unique film in one regard; nobody here is an idiot. You know how in scary movies, there’s always one or two character who do things that just defy logic (forget to turn on the light when entering a room, or saying “I’ll be back” at any point) but Mimic is blessedly void of such rank generics. Sure, competing personality and ideologies provide minor angst or plot twists, and Mimic does occasionally stray into convenience more than I’d like, but you’re never throwing things at the screen in frustration at imbecilic humanity deciding to treat their lives as one giant crapshoot. 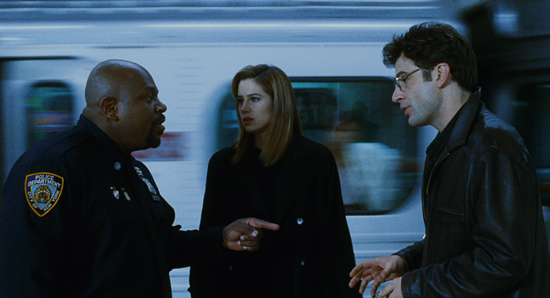 It’s refreshing to watch a film where the people in it aren’t idiots – Sorvino and Northam play scientists, Brolin’s a CDC agent, and Dutton’s a New York Cop (who aren’t dumb, let it be said) – and while the science of what transpires in Mimic might be beyond the realms of possibility, the consequences of genetic manipulation certainly isn’t something people are keen to just let happen. The conflict between science and nature forms the basis for Mimic’s underpinning horror elements, and tackled from an intimate avenue (Susan and Peter are trying for a child, while Giancarlo Giannini’s Manny is looking for his missing son), it provides a nice emotional contrast between the natural horror and the scientific excitement.

Although its artifice and inherent horror roots might dissuade folks from giving it a go, I think there’s a lot to like about Mimic. With a remarkable cast at his disposal, del Toro delivers a genre film that encapsulates so many things people fear and distrust. Darkness, insects, mutation and disease; often frightening, mostly uniquely creepy, and altogether original, Mimic is a heck of a good horror film from Guillermo del Toro, and a film I think largely underrated within the horror fandom. Although, it did spawn two sequels. Guess somebody thought it was good, eh?