My frustration with Melissa McCarthy (and the fact she has a Hollywood career, honestly) continues apace in Spy, an ensemble action comedy riffing on films like James Bond without going into Austin Powers territory. My annoyance with her choice of roles, typically within her limited dramatic range and nominally her usual “fat woman angry at the world” schtick, hasn’t abated after being burned by The Heat, Identity Thief, Tammy, and her defecating kitchen-sink part in Bridesmaids, although here she’s less her usual type and more fish-out-of-water desk jockey trying to make it in a world she’s so obviously unsuited for. My tolerance for McCarthy is fairly small, and to be honest her Oscar nomination for Bridesmaids made me question whether the End Times were approaching, so what I’m about to say should be taken with the shocked amazement I myself find in saying it. 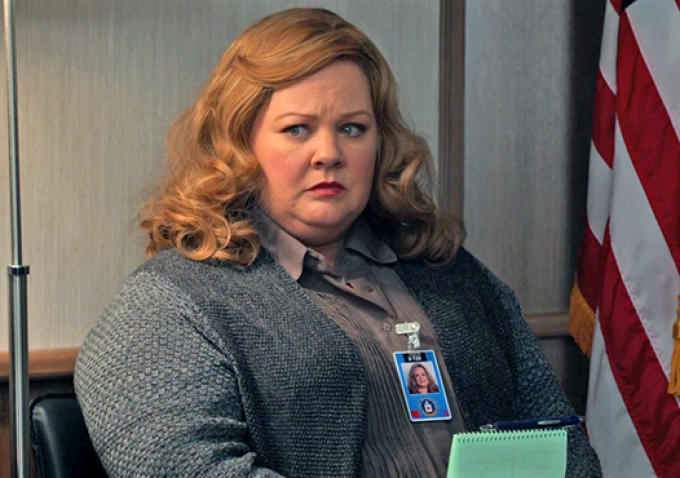 I really enjoyed this film. No, really, a Melissa McCarthy film that didn’t made me want to claw my own eyes out and crawl across broken glass to escape physical torture, Spy is actually really funny, and a great ensemble film that relies as much on the lead actress as it does on everyone else in the cast. McCarthy plays CIA analyst Susan Cooper (or “Coop”), a desk-bound analyst who spends her time directing the agency’s top operative, Bradley Fine (Jude Law), in the various missions he engages in. On one such mission, Fine accidentally kills his target, inadvertently losing all knowledge about a hidden nuclear bomb designed to inflict maximum casualties. The target’s daughter, Rayna Boyanov (Rose Byrne) is thought to have knowledge of the bomb, so the CIA goes after her. But after Fine is taken out, and the identities of the CIA’s agents worldwide are blown, and against the feelings of fellow agent Rick Ford (Jason Statham), the organization calls upon Cooper to go undercover and extract the intel they need to thwart a catastrophe.

Now, before you get all flag-waving and march-on-Washington overjoyed that I’ve found a McCarthy film I enjoyed, let it be known that I enjoyed it even in spite of McCarthy’s appearance in it. The film does have its egregious faults, notably one in which the majority of the humor is “fat humor”, the kind of thing Rebel Wilson’s made her career out of, and somehow validating the Hollywood propensity for fat-shaming, only through the lens of McCathy’s jelly-wobble humor. McCarthy’s a fattie, so that’s funny, apparently. 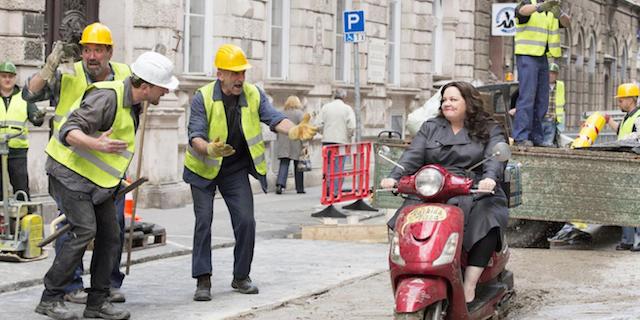 Well, even if the woman herself is calling it what it is, I find the repetitious, often negative connotative elements of this kind of humor both wearying and unedifying. Physical humor is okay, sure, but McCarthy’s stock in trade is to trade on her physicality to the detriment of nearly everything else, and that just annoys the shit out of me.

Spy, which relies heavily on that trademark humor, isn’t the Pepsi-at-the-screen awful I’d expected when her name came up. In fact, I’d go so far as to say the film is really rather sweet, in that kind of innocent way fat people think they’re attractive to others. Guffaw. Nah, it is a really good film, the humor is dead on, McCarthy isn’t as odious as I expected, and with Aussie Byrne, The Stath™ and Jude #attractivebastard Law following up in support roles, the film’s funny streak draws out some truly solid laughs. Although the film’s “spy” genre cliches come thick and fast, with double agents, drone explosions, subterfuge, near-misses, and plenty of running gun-battles (all with McCarthy’s trademark self-deprecating style in full swing), Paul Feig’s direction gives proceedings a nice slap-and-dash pacing that allows the humor and action to work together well, rather than in a jumble. 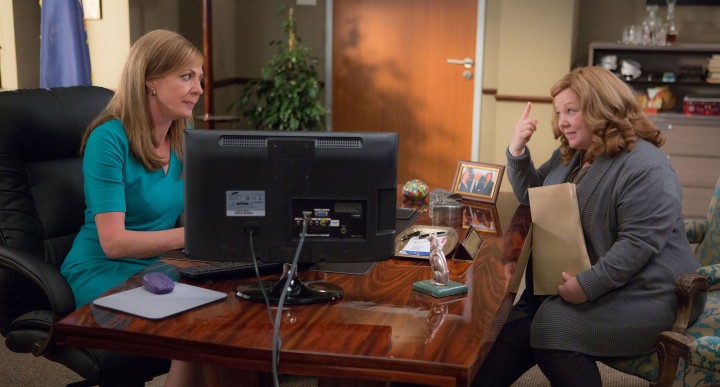 McCarthy aside, the cast are all on song. Allison Janney, as CIA Deputy Director Crocker, is a ball-buster but not without empathy, while The Stath™ is a riot as the angry Brit agent, Rick Ford, with authority issues. Another Brit, Miranda Hart (you may remember her from the UK television series Miranda, as well as period drama Call The Midwife) is sweet as Cooper’s best friend and fellow analyst, Nancy, and Rose Byrne has a blast as the “dastardly” femme fatale, Boyanov. Everyone knows they’re in a comedy, and play it for all they’re worth – especially The Stath™. The dialogue is sharp, with Paul Feig’s script empowering the audience to laugh at the scenario moreso than with it, which is rare in most American comedy these days. The inclusion of a more eclectic band of comedians to fill out the various roles is also welcome, a broad range of performances eliciting substantial humor even when the film weakens during its middle act. Otherwise, Spy is a strong comedic work from all involved.

I’m disinclined to say Spy is the best film Paul Feig’s directed, because I don’t rate him as a master visual stylist more than a solid comedic artisan who understands set-up and punchline better than most. But Spy’s artistic merit might be better than most (the opening Bond-like credits are great) and although it’s primarily a comedy, I do wonder what Feig would do with a straight up action film with no comedy. Spy is often hilarious, has plenty of actual LOL moments, and has McCarthy in a role where she’s not a total waste of considerable space.