Eyes Wide Shut was Stanley Kubrick’s final film. The director passed away (aged 70) only days after showing the studio heads at Warner Brothers his initial cut. The film’s release, in 1999, came a full twelve years after his previous release, the hugely acclaimed Full Metal Jacket, in 1987. The film’s production, starring Hollywood A-lister Tom Cruise and his ten-wife Nicole Kidman, had run between November 1996 and June 1998, a stunning 17 month shoot that caused Cruise to drop out of other projects due to its arduous nature. Sold on its promise of salacious nudity between Kidman and Cruise, as well as some purportedly extravagant orgy sequences, Eyes Wide Shut opened to enormous anticipation – morbid, perhaps, considering the director’s passing prior to release – but the final film’s lengthy running time and plodding, glacial pacing kept general audiences away once word got out that the film was as sexy as embalming fluid. 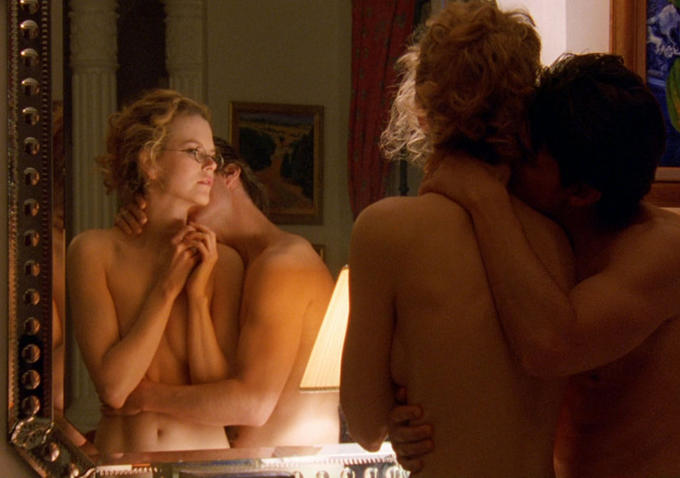 Based on a 1926 novella entitled Traumnovelle, aka Rhapsody: The Dream Novel, aka Dream Story, Eyes Wide Shut is a story of psychological fracturing and fidelity wrought bare between an outwardly successful married couple – Dr Bill Hartford (Cruise) and his wife Alice (Kidman). After attending a Christmas party for an old friend (Sydney Pollack), Bill and Alice become separated and both are almost seduced by various attendees throughout the night. Upon returning home, Alice asks if Bill slept with two nymphs who went off with him, which he denies, before they engage in discussion about the inherent faithfulness of men and woman. Admitting she once fantasized about another man, Alice’s emotional wrangling causes Bill to flee off into the night to think, where he encounters a hooker (Vinessa Shaw), a Russian costume shop owner (Rade Serbedzija) and his promiscuous daughter (Leelee Sobieski), and eventually finds his way to a mysterious manor house out in the country, where masked orgies occur via some elaborate, anonymous group. As the night wears on Bill has to come to terms with not only his own fantasy away from Alice, but Alice’s possible infidelity to him.

As a film fan, I approached Eyes Wide Shut’s cinematic debut with a certain level of hesitancy. After all, Kubrick wasn’t exactly the most commercial director going around, and given the decade between his previous film and this one, not exactly prolific. Treated as an event by Warner Bros, the cinema screening I went to in 1999 was absolutely packed out. 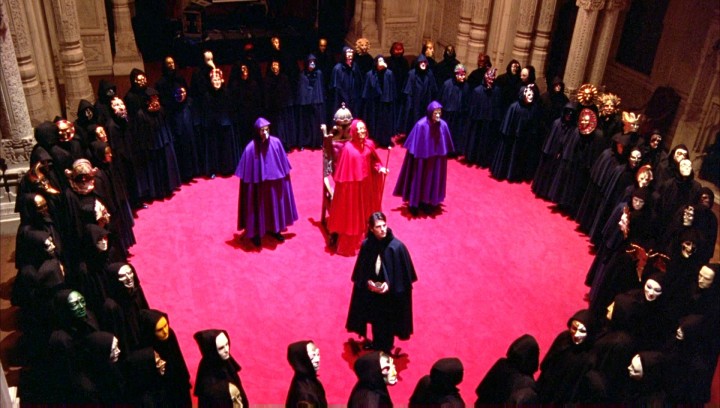 Not a spare seat anywhere, not even the chiropractor ones right down the front where you’d need a good cracking to correct spinal and neck distortion following a screening. As the film started, expectation was huge, the murmur of conversation prior to the lights going down centered around the sexual nature of the film, and whether we’d finally get the voyeuristic thrill of seeing real-life husband and wife Cruise and Kidman debauch themselves in a sex scene. Nearly three hours later, bums were numb, people shifted uncomfortably in their seats, and the feeling of anticipation had swerved from adolescent tittering at the glorious full-frontal nudity (an early scene were Cruise, Sydney Pollack and a nude, unconscious woman appear on screen for entire minutes, drew some mild murmurs) to boredom and the feeling we’d been swindled. Hell, not even the film’s vaunted orgy sequences, most of which took on a bizarre dream-like state via Kubrick’s iconic steadicam filming style, could rouse the audience from its apathetic miasma. Eyes Wide Shut’s initial viewing for me, and for those in the cinema with me, came across as Eyes Wide Shit. The film played more like an endurance test than a narrative film, with lengthy, utterly incomprehensible emotional buttercock set-pieces being as intriguing and engaging as a swift kick to the scrotum. 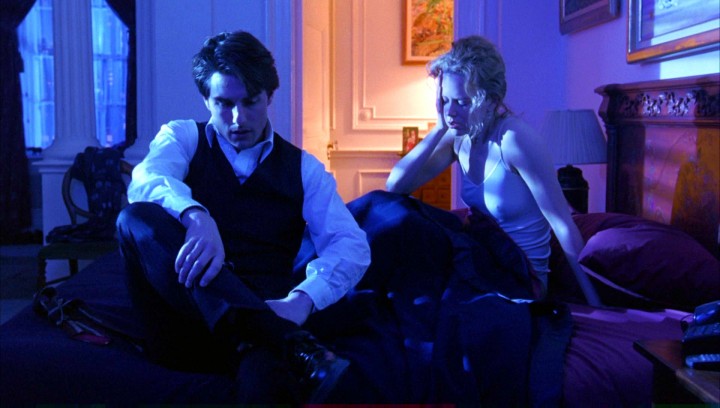 Kubrick’s style of film-making isn’t conducive to deep, emotionally resonant character – in my humble opinion, most of the films made by the man have had a veneer of distance between the events on the screen, and the audience, and never has that gap been wider with his final epic flourish. Meticulous design, framing, editing and acting would normally combine to produce a truly terrific work of art – so you’d think, given what David Fincher has been able to accomplish – and with the film’s considerable production time, coupled with Kubrick’s hours-upon-hours of discussion with his high-profile leads on-set about motivations, emotional arcs and whatnot, you’d expect Eyes Wide Shut to blow us away. Sadly, I found this film an empty, lifeless thing devoid of passion, devoid of interest other than a thirty second scene where we see Kidman in the nude molested by Cruise, and Cruise’s obvious devotion to the project.

Even though the film’s length is torturous for such an empty narrative, a narrative where we’re supposed to get “into” Bill Hartman’s head as he weighs up his wife’s fidelity, Kubrick’s inability to actually engage the audience is telling for his visual acuity never accommodating his cast’s natural screen presence. Both Cruise and Kidman have the ability to display enormous audience-grabbing performances – hell, Cruise’s devotion to each project he undertakes is well documented – but here, even though you can see Cruise doing all the heavy lifting demanded of him by Kubrick, something about the film doesn’t feel like it fits. 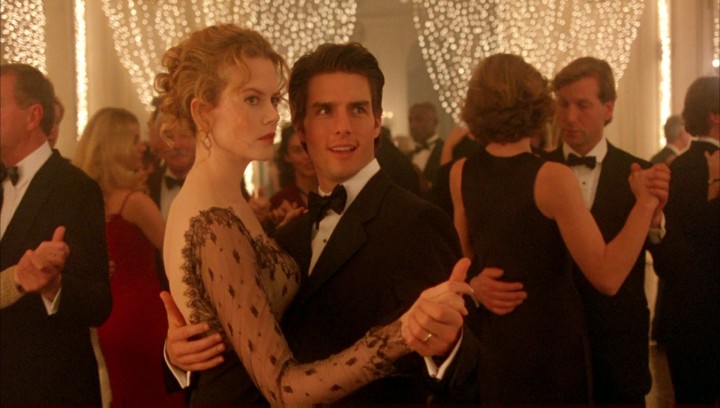 I feel sorry for Cruise, stuck inside a film that asks more of him than he’s able to deliver (his emotional repertoire wasn’t as honed in the mid-90’s as it is today) but he gives it his all, and if there are any weaknesses to the film, his performance isn’t one of them. Kidman fares little better, inside a shrew-like character we don’t really get to know other than as either Kubrick’s muse on female sexuality, or objectified through inadequately explored physicality. 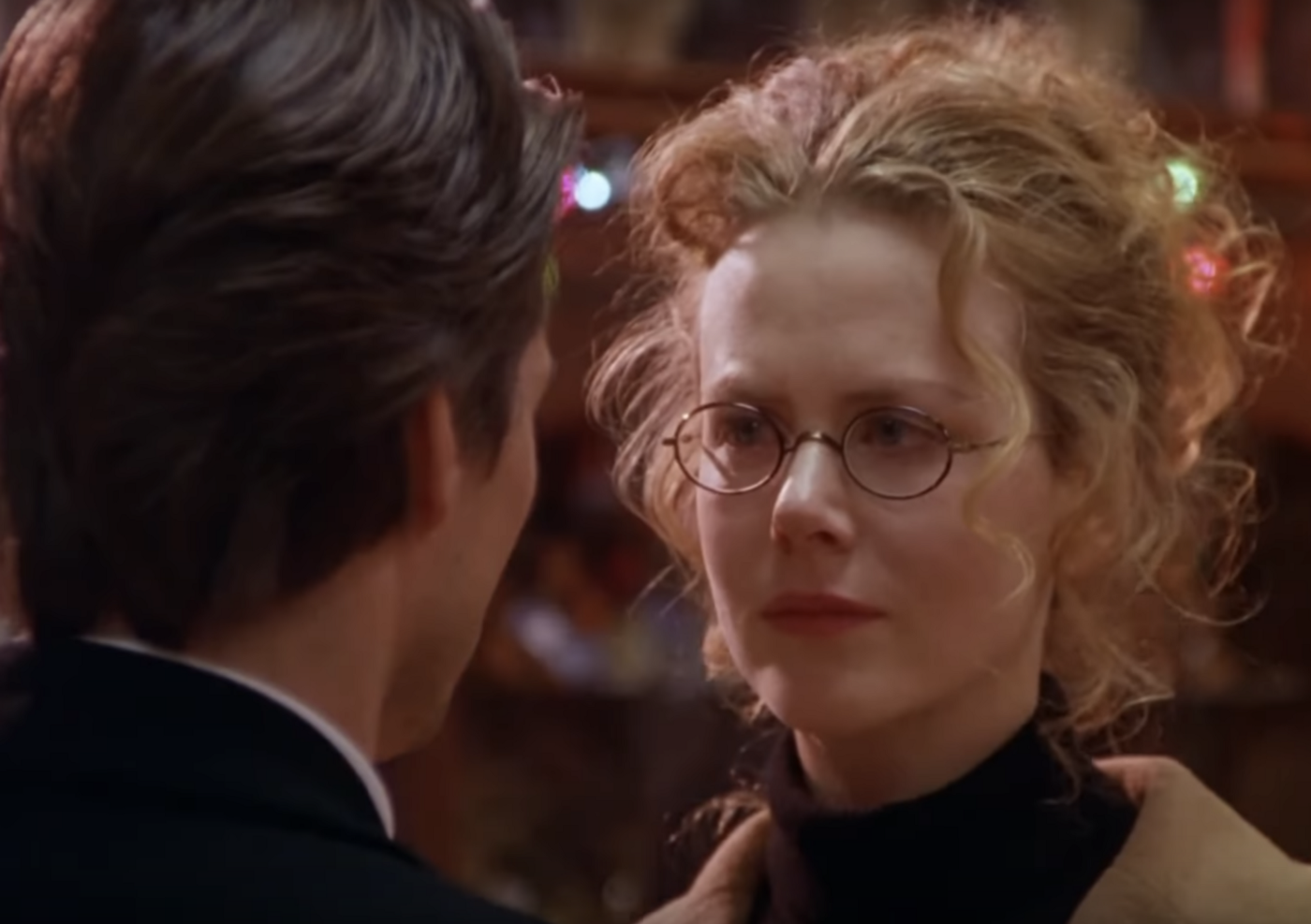 Admittedly, the story doesn’t do much for me; I’ve seen better explorations of marriage, infidelity and the ramifications of sexual tension through any number of episodes of Friends. As a technical exercise, I lament Kubrick’s ability to show restraint and validate his own perceptual inadequacies: the film is way too long, to ponderous, too gynaecological for its own good, and it needn’t have been. Kubrick famously asked Cruise to walk through a door no less than 97 times to get the perfect take. It’s a shame the man was so busy perfecting door walking that he couldn’t find an emotional center to the story, or the characters. Although he might be a visual master, and redefined various genres of film in the past, erotic psych-thrillers wasn’t to be among them. 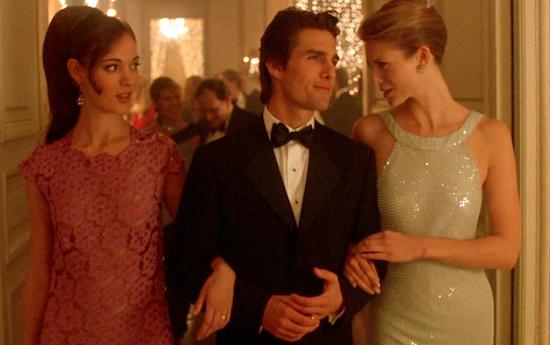 Rewatching the film for this review was again a torturous venture, while I might have found more here to intellectualize than perhaps I had previously, the film still didn’t pierce the section of my brain I use to engage with films. Kubrick’s cool film style, his use of irritating music (half the film is just some dude banging on the same single note on a piano…. ugh) and lengthy, protracted sequences of demountable internal battles for Cruise’s character, none of which translated all that well to the screen, make Eyes Wide Shut a bit of a chore to get through. As a fan of Kubrick I have to admit this is the film I had the least interest in revisiting, and sadly my fears were borne out in the story’s lamentably impenetrable exterior.