Ask anyone under the age of about 20 to name dragons depicted in film recently, and I guarantee you’ll get the top answer of Smaug every single time. Prior to that though? Whatever that dragon’s name was in Eragon? How about Sean Connery’s rumble-voiced Draco in DragonHeart? If you’re lucky, I think. But I bet you don’t get many responses for this film, Reign of Fire. Prior to Smaug’s arrival in Peter Jackson’s The Hobbit, dragons on film had been relatively few and far between, and generally stretching convincing CG technology as far as it could go. Whereas the selling point of most dragon-related film was not always about the dragons (hell, even DragonHeart spent most of its time dealing with Dennis Quaid’s American-speaking English knight), but Reign Of Fire went a long way to rectifying that imbalance with a ferocious, frankly terrifying return to dragons as brutal, powerful, utterly alien creatures lurking around our world. Directed by X-Files feature helmer (and regular Star Trek television show director) Rob Bowman, Reign of Fire starred a before-he-was-Batman Christian Bale, and a hulking, scenery-chewing Matthew McConaughey, and attempted to deliver a genuine apocalyptic thrill ride unlike any we’d seen before. 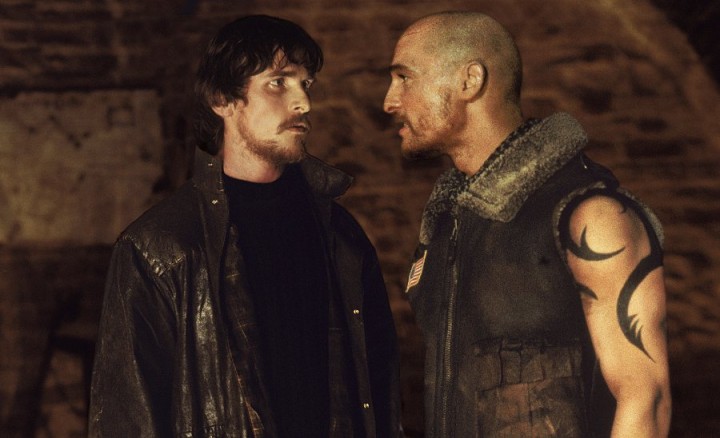 Bale plays the bizarrely named Quinn Abercromby, the leader of a group of surviving humans in post-apocalyptic England, where years earlier a male dragon had burst from deep beneath the Earth’s surface, layed a bunch of eggs, and subsequently allowed a new species to dominate the planet. As crops wither and struggle under the fiery blaze of dragons swirling through the sky, Quinn and his community are relieved (we think) to meet American dragon hunter Denton van Zan (Matthew McConaughey) and his team, including Alex Jensen (Bowman’s real-life wife Izabella Scorupco). Van Zan’s mission is to kill the male – in doing so, the species will be unable to reproduce, leading to the eventual demise of the creatures and a return to power for humanity. As Van Zan’s plan leads to increased danger to Quinn’s survivors, he’s unwilling to put them in harm’s way, but events transpire to force his hand, leading him into a battle for survival in the ruined streets of an abandoned London.

Reign of Fire is an interesting film from Rob Bowman. Matthew McConaughey was an up-and-coming Hollywood hotshot, fresh off box-office successes like EDtv, U571, and small roles in movies like Contact and Amistad. Christian Bale had exploded onto the scene with two consecutive powerhouse performances in American Psycho, and the Sam Jackson Shaft remake, but prior to that was best known to audiences stateside as the kid from Spielberg’s Empire Of The Sun. Knowing now what we didn’t then, we’d have laughed if you’d said McConaughey would spend the next decade or so dwelling in unfathomably mindless romantic comedies, while Bale would become one of the generational greats through appearances in The Machinist, Christopher Nolan’s Dark Knight trilogy, and films like The Fighter and American Hustle. Less could be said of Rob Bowman, whose directorial output following this film was the execrable Elektra, then a return to plenty of television work. Reign Of Fire sees both Bale and McConaughey on the cusp of mega-star careers, although considering this film’s languishing narrative quality, it doesn’t really expose that to any great extent. 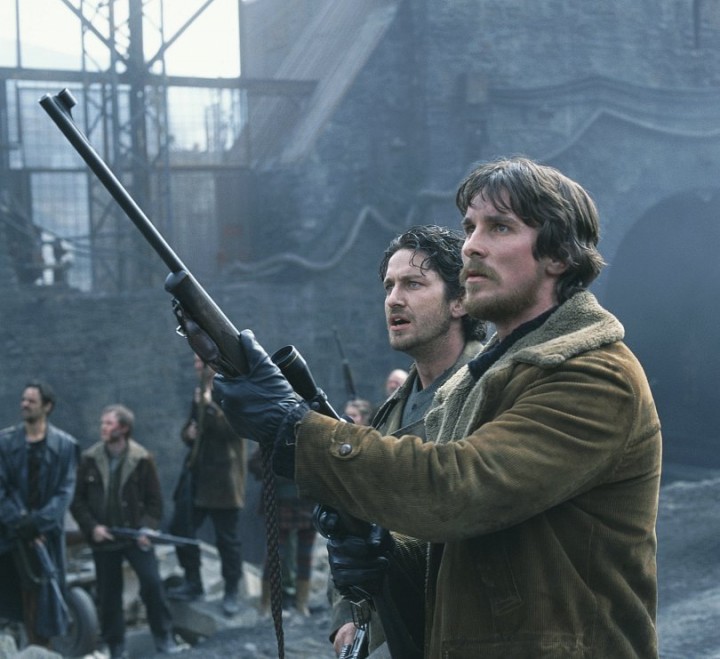 At first blush, Reign of Fire’s central narrative involves Christian Bale’s hapless (but not hopeless) leader figure in Quinn. Bale’s enthusiastic, driven performance sells the film in ways most actors couldn’t have achieved, at least until it goes all gung-ho action on him and he begins to flail about aimlessly. Quinn, being the one holding the rag-tag community of dragon survivors together through sheer force of will, has the rug pulled from under him by the arrival of Alpha Male McConaughey, as Van Zan, a muscular hulk with entirely too much dragonlust and too little restraint. McConaughey’s character is the wide-eyed spittle-producing zealot type, who’d climb over his mother’s corpse to achieve the mission result if it required it, and the actor plays it to the hilt. Honestly, though, Van Zan as a character seems out of place here, his zany facial tics and infuriatingly American ideals contrasting with the more restrained Bale in ways that the film’s overarching narrative can’t sustain. Bowman, in trying to give the film a grittiness and a wallop of grunge, forgets that McConaughey is (at least at this part of his career) all feathers, rainbows and unicorn farts.

Reign of Fire plays as a straight-up action flick, but it’s several parts horror film, a few parts survivalist thriller, and small moments of science fiction. While the film’s dark tones and dank, oppressively melancholy visuals might allow for audiences to be sucked into this as anything but, make no mistake: Reign of Fire is not quite the sum of its many parts. Now, before you rail on me for hatin’ this movie, can I just say that I did, and still do, love the shit out of any film featuring angry, fire-breathing dragons. This isn’t a pacifists film, nosireee. Several action beats, particularly a superbly filmed scene involving a trio of parachuting skydivers who use gravity to trap a creature that flies, only to almost entirely fall to their deaths as the dragon attacks, are tautly helmed, and by-and-large the film’s thrills outweigh the problematic visual effects (looking back at the film now, some of the obvious moments, like Van Zan’s final leap off a tower to hurl an axe into an oncoming dragon, are absurd and frankly awful). But the characters range from appropriately neutral and melancholy, to outright lunacy (again, McConaughey), I had a hard time trying to determine how I should feel throughout the film. 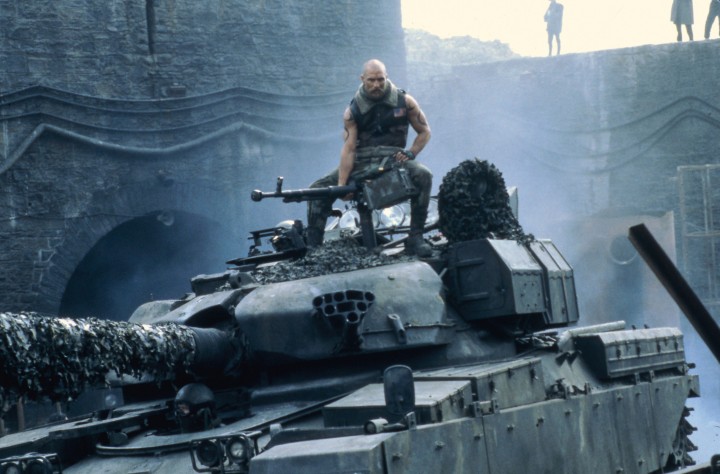 Rob Bowman at least gives us some memorable dragon sequences. The finale of the film, especially, makes great use of the destroyed London setpiece and gives ample opportunity for the title dragon to really sell the film’s danger. These CG creatures are violent, visceral, and fill the screen with lizardous creep, the kind of reptilian nastiness you’d expect from creatures buried beneath the Earth for millennia and reborn to a world of 1 Direction fans. The effects are generally excellent, although sometimes they don’t quite mix well into the plate backgrounds and the illusion becomes mildly wonky. Although, for 2002 CG tech, it’s not bad at all.

Reign Of Fire is an unbalanced but competent sci-fi thriller, an emotionally destitute story of humanity on the brink but saved by a clever MacGuffin to kill the dragons (way too easy, if you look at it objectively) in a deux ex machina moment that feels tacked on, almost obvious by comparison to the rest of the film. Bale makes a good fist of his role, in an intense performance, McConaughey looks like he’s at the scenery buffet table with a time limit, he chews it so much, and the film’s oppressive grey-hued visuals cast a pall across proceedings, but for Y2K era film-making, it’s a solid entry into the dragon genre. It ain’t no Smaug, but it’s still entertaining.