Director :  Tom Shadyak
Year Of Release :   1998
Principal Cast :  Jim Carrey, Maura Tierney, Justin Cooper, Jennifer Tilly, Amanda Donohoe, Jason Bernard, Cary Elwes, Swoosie Kurtz, Anne Haney, Eric Pierpoint, Chip Mayer.
Approx Running Time :   86 Minutes
Synopsis:   A hot-shot lawyer wakes to discover he cannot lie, throwing his life – romantic and professional – into turmoil.
What we think :  Classic Jim Carrey feature finds the comic at the very height of his powers, as he mugs and spastics his way through a (for him) relatively restrained performance as a hotshot lawyer struggling to deal with an inability to fudge the truth. With a terrific supporting cast, and a manic script allowing Carrey to overact at almost every opportunity, Liar Liar remains one of his best all-round films to date.

Most people find Jim Carrey an actor they only need a little of to wear out his welcome. He’s a “take it or leave it” kinda guy, a more spasmodic version of Robin Williams, only without the intellectual dexterity; a little of Carrey’s manic screen persona, established in films such as Ace Ventura, The Mask, and Dumb and Dumber, and enriched by blockbuster films like Batman Forever, goes a long way. Most critics derided the comic as a one-note performer, and in hindsight I guess that much is true of the rubber-faced Carrey, who, against the grain, sheds a lot of his outrageous hysteria to give Liar Liar’s more relaxed effort an edge without sacrificing core character truths. Considering the actor’s work to this point, Liar Liar comes as a breath of fresh air, a charming, hilarious, crowd-pleasing comedy film that works because Carrey isn’t over the top, as usual. 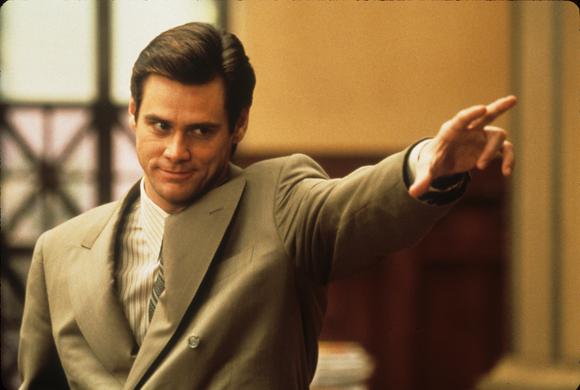 Carrey plays Fletcher Reed, a hotshot lawyer who spends more time having affairs and at work than he does with his son Max (Justin Cooper), and his estranged wife Audrey (Maura Tierney), whose new boyfriend, Jerry (Carey Elwes) is about to ask her to move across the country when he takes another job. Fletcher is known for breaking promises to Max, and has missed numerous birthdays, baseball matches and other important father-son bonding time; after he missed Max’s latest birthday, the young boy wishes over his cake that one day his father cannot tell a lie. That wish comes true, and Fletcher wakes from a sexual liasion with a coworker unable to lie; the horror of which casts into doubt his ability to do his job of defending the odious Samantha Cole (Jennifer Tilly), a gold-digger looking to benefit from her husband’s infidelity. As his life is thrown into chaos due to his inability to lie, Fletcher has to learn that sometimes, telling the truth is the only way to grow.

The 90’s were a great time to be Jim Carrey. Blasting out of comedy series In Living Color, and rising to fame off the back of his outrageous lead performance in Ace Ventura: Pet Detective, Liar Liar saw the comedian at the peak of his powers following a sting of successful movies (I should note, prior to this, the less successful Cable Guy, as well as the Ace Ventura sequel, had opened to tarnish his rep as a compelling box office draw) and commanding then-unheard of $20 million paychecks. Unlike the majority of his roles, however, Liar Liar makes a bit of a change in that it’s the kind of film that doesn’t let him have free reign to just go nuts, like he did in his Ace Ventura films. Directed by Tom Shadyak (his Ventura directing partner), Carrey offers a more layered performance that belied his ability to actually… you know, act, rather than simply pull silly faces for the camera. Okay, so this film isn’t Oscar-caliber Carrey, and there are moments of manic comedy that will make you bust a gut if the mood takes you, but rather than simply hit level 10 from start to finish, Carrey provides the character of Fletcher with light and shade, a charismatic leading role that not only makes his douchebaggery less douchey, but actually makes us want him to succeed even though he’s a douchebag. 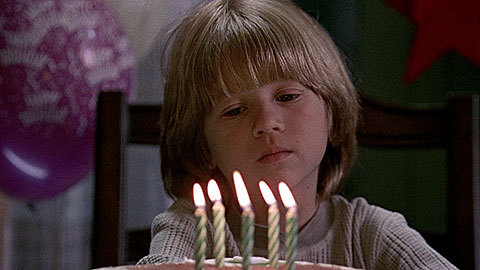 While Liar Liar is undoubtedly Carrey’s film to carry, he’s supported by a game cast who enable him to go large when the script calls for it (a courtroom-set finale, in which Carrey attempts to filibuster his way through to a verdict he needs, is hilariously over-the-top), but also offer more dramatic heft when the narrative needs to quieten down. Hard as this is to say out loud, Carrey’s dramatic work here is actually fairly tender, and honest-to-gosh good. Maura Tierney provides Carrey’s romantic lead, although she spends most of the film being pissed at him, while Cary Elwes makes a solid “anti-Fletcher”, a staid, plain man without a shred of zest or fun in his body. Justin Cooper’s Max has a terrific chemistry with Carrey, even though the older actor has to shoulder most of the dramatic burden; Cooper isn’t much chop naturally, but he acquits himself well enough that he’s not Edward-Furlong-In-Terminator-2-bad for a child actor. 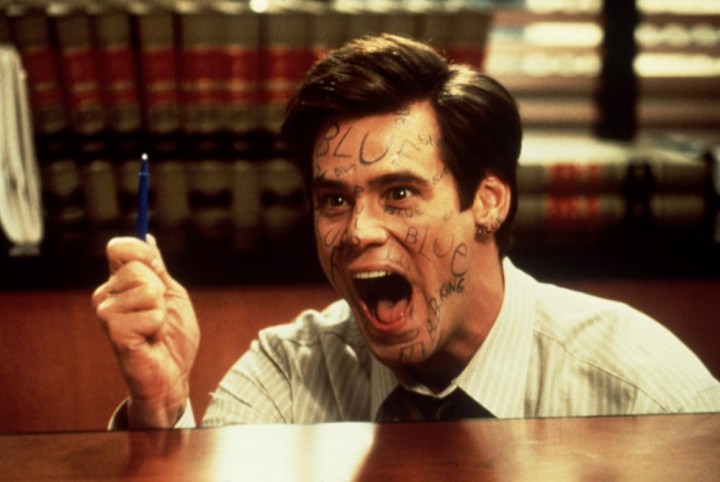 Bit parts to Jennifer Tilly, whose slimy adulteress is one of the film’s most “Bad Guy” roles, the late Jason Bernard as the Judge leading Fletcher’s case, Anne Haney as Fletcher’s long-suffering secretary (she steals every single one of her scenes with Carrey, and looks like she’s about to lose her shit in hysterics with every passing minute), and Amanda Donohoe (unfortunate surname, that) as Fletcher’s boss, give more than ample material for the leading man to bounce off, and he does well. A few moments don’t quite work well, however – notably, a “roast” Fletcher gives to the firm’s boss is cringe-worthy and embarrassing (you can see Carrey almost gagging on the dialogue) – while some of the formulaic romantic elements between Carrey and Tierney come across as contrived, almost desperate.

Generally, however, you’d be hard pressed to skip this if you’re a fan of comedy. It’s probably one of the 90’s best comedy movies, at least in my opinion, and remains one of Jim Carrey’s most semi-restrained performances that relies on emotion and dramatics more than simply pulling a stupid face. Although he would broach legitimate drama in the years afterwards, I think approaching this as one of his first all-round efforts – as opposed to outright comedy – then you’ll have an absolute blast. Oh, and some of the film’s best moments come in the outtakes during the closing credits, so stick around for those. Liar Liar is top-shelf 90’s comedy, and a film from Jim Carrey that’s neither obnoxiously overbearing or ineffectual; frankly, aside from the original Ace Ventura, this is the film of his I’m happy to return to over and over again.