American “high school party” films have become a dying breed in most respects, although that might seem false considering the success of the American Pie movies over the last decade or so, but the late 90’s certainly did their best to reestablish the genre as a legitimate comedy format. Both Can’t Hardly Wait, and American Pie (which came out the following year), revel in their depictions of American high-school archetypes – the jock, the bitch, the nerds, the sexually immature, the shy one, the gangsta and the shrew, to name a few – but it’s Can’t Hardly Wait that massaged the romantic/comedy aspect of the genre to great effect here. Not all of the film works well, and there are moments of clunky “comedy” and stretched character wranglings that feel forced, but as a genteel example (with only minor “gross out humor” themes) of this teen comedy model, Can’t Hardly Wait is pleasant enough. 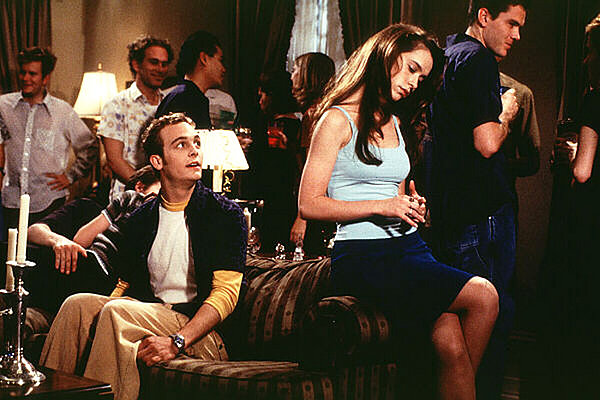 At the end of their senior year, a group of Philadelphia high-school student gather at a house to party. With copious amounts of alcohol, inhibitions are lowered and things start to get a little crazy. For Preston Meyers (Ethan Embry), the news that his long-time crush, Amanda Beckett (Jennifer Love Hewitt) has dumped her selfish, arrogant jock boyfriend Mike Dexter (Peter Facinelli) fills him with excitement, for he plans to use her attendance at the party to tell her how he feels. He’s written a letter explaining his feelings for her. Preston’s friend, Denise (Lauren Ambrose), helps him pluck up the courage to do so, before inadvertently getting stuck in an upstairs bathroom with fellow classmate, Kenny Fisher (Seth Green), who used to be her friend before he became obsessed with becoming “popular”. Nerdy William Lichter (Charlie Korsmo) has a plan to seek revenge on Mike Dexter for years of bullying and torment, and together with his friends Geoff (Joel Michaely) and Murphy (Jay Paulson), arrive at the party with intent to humiliate. However, Williams’ plans go awry when he starts to get drunk, and accidentally becomes the life of the party and bonds with a despondent Mike over his break-up with Amanda.

Can’t Hardly Wait is a terrific example of an ensemble cast just working. Although the film is propelled largely through its continuous use of interwoven cross-interactions with a variety of the cast, the mise-en-scène allows for numerous one-shot jokes and cameos from more noted stars at the time. The film’s jocular use of stereotypes, most of which stretch back down the decades to at least Grease’s game-changing iconographic replication of American school life, are familiar, but hardly fresh. And the rampant cliches surrounding those stereotypes, including references to drugs, Star Wars, sexual encounters (“Have you had sex before?”) and drinking to excess, are trotted out, although in the film’s favor it all feels so discombobulatingly frantic, almost farcical at times, you kinda forget that it’s all been done before. It also pays to note that I don’t recall any of my girl friends in high-school looking like Calvin Klein models, which is what the majority of the cast here all seem like. I know it’s hard to cast actors who look like high-school student, but with only a few exceptions, this would have to be the most attractive school in the history of the world. 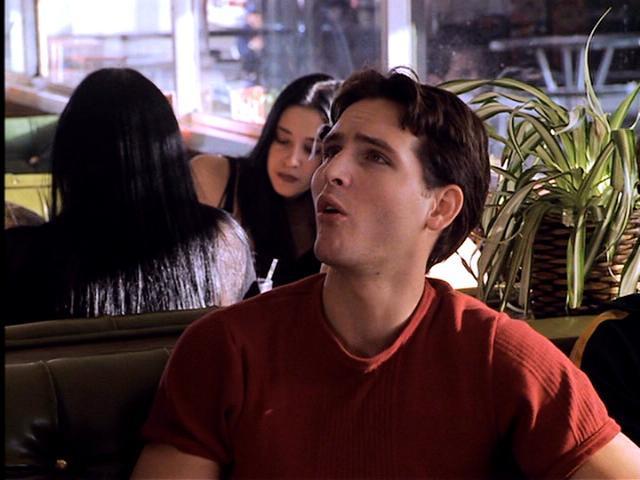 The central plot, or at least the one I was most interested in, involved Ethan Embry’s character, Preston, and his infatuation with the “unattainable” Amanda Beckett. As a male-fantasy model, it ticked all the boxes – who hasn’t been the unpopular kid, or the “ugly” kid, or the nerdy kid at school with no chance of “getting with” the unbelievably well-developed “hot girl”? Embry’s personification of the shy romantic wallflower isn’t entirely implausible, but his character’s starry-eyed hippie trip fate reliance does wear thin at times, as he spends the film engaged in the most one-sided relationship in history. While he pines for Amanda, she doesn’t even know who he is, until she picks up and reads his letter after a series of miscommunications (aren’t they tedious!), and chases him down. The romantic elements of this subplot work at a superficial level, but the ease with which the extremely-recently-single Amanda hooks up with him in the end had my wife grinding her teeth – “She’s only been single for five minutes, met the guy for the first time two minutes ago, and already they’re kissing?” Also, if you watch carefully, in the promo pictures Embry towers over Hewitt in real life, even though in the film he’s portrayed as being shorter than her. So nice camera-tricks, guys.

The “Comedy” subplot of the film is nerdy William’s revenge-plot-gone-awry, as he gets plastered, sings karaoke, and drunkenly bonds with the guy he’s supposed to be hating on. This would be Charlie Korsmo’s final film prior to returning to University and becoming super-educated, going on to have a successful career in the world of academia, but his performance as William is one for the ages. It’s the ultimate “nerd makes good” story, where he suddenly finds himself the center of attention and unable to handle it due to never being drunk before. Korsmo’s unique melancholy at his character’s years of belittling is ingratiating, making him a truly memorable character (if not, then at least the one with the most memorable, trailer-worthy dialogue).

I should also note the blustering performance of Peter Facinelli (who would go on to play the paternal father-figure to Edward Cullen in the Twilight series, Conrad), as Mike Dexter. We all know a Mike. The dude who is alpha male in high-school, but forgets that one high-school finishes, and people go their separate ways, his cocky attitude and sheer arrogance will lead to poor life choices and inevitable ruin. Facinelli is terrific, selling the role but never making us hate the character outright. It’s hard to make a bully sympathetic, or just pathetic, without a measure of resentment towards him, but Facinelli achieves it wonderfully. 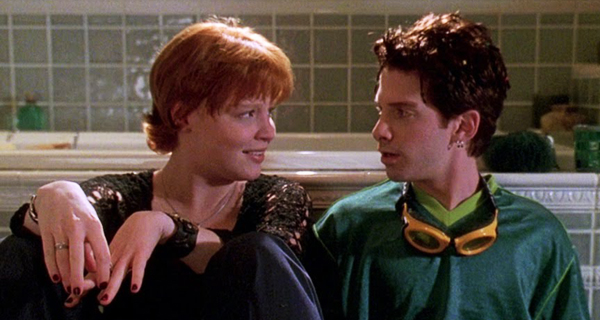 The least interesting storyline of the film is one starring one of my favorite performers, Seth Green, as the “wannabe gangsta” Kenny, and his one-time best friend Denise, played by Lauren Ambrose. Ambrose is to this film what Natasha Lyonne would be to American Pie – she’s the “sensible”, “judgmental” one with a straight up disdain for most of those she’s surrounded by. As this pair are stuck in a bathroom (long, groan-worthy story) and are forced to bond through boredom, their plight feels the least energetic, as it pithily wanders through embarrassed narrative undressing and into sly, furtive glances at each other before sex is initiated.

Story aside, the fun of Can’t Hardly Wait now lies in its “hey, what’s he/she doing in this movie?” moments of realization as to how awesome this cast truly is. Cameo appearances by Dahrma & Greg’s Jenna Elfman, My Secret Identity’s Jerry O’Connell, Breckin Meyer, and supporting roles to notable names like Sabrina The teenage Witch’s Melissa Joan Hart, Scrubs star Donald Faison, Pineapple Express’s Jason Segel, Argo’s Clea Duvall, Cruel Intentions’ Selma Blair, The District’s Sean Patrick Thomas, My Name Is Earl’s Jamie Pressly, and Haven’s Eric Balfour, make spotting faces in this film a real good drinking game. And if you can list all the cast members who appeared with star Jennifer Love Hewitt in her popular television drama, Party Of Five, that’s another list for a drinking game. Oh, and big props for the casting of American Pie’s Chris Owen (The Sherminator) as a delinquent kleptomaniac who has zero dialogue but almost steals the film. Pun intended.

Can’t Hardly Wait is a typically debauched teen-centric comedy revolving around sex, drinking, and unrequited love. The stories and characters are broadly simplistic, with the film living or dying purely on the strength of its characters and the hilarity of the sitcom-styled predicaments that occur within the context of a night-long party. Although the film’s PG rated antics would be subsumed a year later by American Pie’s raunchy pastry-f@cking tone, Can’t Hardly Wait is a sugary, frothy, heart-on-sleeve romantic comedy that doesn’t outstay its welcome, and is surprisingly restrained most of the time.