If there’s a personification of soulless, event cinema, then Swordfish captures the millennial generation in a nutshell. Filled with cybertech gibberish, a nutball performance by John Travolta (admittedly, it’s one of his braver career turns following his Pulp Fiction resurrection), a topless Halle Berry, and an up-n-coming Hugh Jackman (coming off Bryan Singer’s X-Men a few years earlier), Swordfish swaggers into view with the rip-cord adrenaline-junkie frisson of high concept narrative and competent-yet-unremarkable direction, even managing to skewer so many genre tropes it becomes a gag in and of itself. Swordfish might seem to many like an underrated classic, and indeed, I felt it was a bona fide work of genius when I saw it back in 2001, but a decade and a half on, time hasn’t been kind to this techno-thriller. 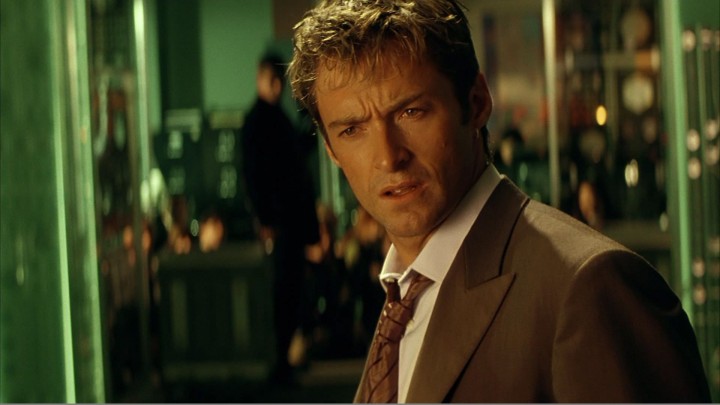 Jackman plays Stanley Jobson, a computer hacker recently release from Leavensworth Prison, and trying to rebuild his life. His estranged wife, Melissa (Drea De Matteo) has a restraining order on Stanley, meaning he can only see his daughter Holly (Camryn Grimes) with explicit permission. Jobson’s arresting officer, FBI Agent Roberts (Don Cheadle), keeps a close eye on him as well, waiting for him to slip up. Jobson is recruited by militant mercenary Gabriel Shear (John Travolta) and his associate Ginger Knowles (Halle Berry), in order to hack into a government system and steal billions of dollars to arm black market terrorism. Shear holds the safety of Holly hostage until Jobson agrees to do the job, knowing he could very well be sent back to prison and never see his daughter again.

One part Matrix, one part techno-thriller, all parts dumb, Swordfish is perfect cineplex fodder that’s as disposable as a quart of coke and a large popcorn. While intrinsically stupid, bereft of even the barest realism, or even genuine emotion (aside from Jackman, but more on him in a bit), this slick, maneuvering swerve-ball of a movie will entertain at the superficial level it operates at, but falls to pieces when the screws are turned on any kind of legitimacy. Written by Skip Woods (whose screenwriting duties before and since indicate just how mediocre the man’s work truly is) the film is a baffling attempt at curveballs and plot twists to the point of ridiculousness; the narrative’s contrivances and conveniences in terms of character development, the aforementioned twists, and subterfuge at an amateurish level, are nihilistic to a fault.

Swordfish feels like the progenitor of the Bourne franchise and James Bond, if James Bond were an asshat and Jason Bourne an idiot. Led by a scenery-chewing John Travolta, whose presence here overshadows the plot and essential emotional content, Swordfish’s labyrinthine narrative plays its tricks close to its chest, but when comes time to reveal what’s up its sleeves, is found wanting by borderline asinine bait-and-switch storytelling. Travolta’s maniacal and deranged Gabriel Shear opens the film with a terrific monologue almost to camera, before an explosive hostage sequence – which sees the return of producer Joel Silver’s Matrix-inspired “Bullet Time” effect – ramps up the tension. Following that, however, the film sputters to a slow crawl, as we’re forced to endure Hugh Jackman’s attempt to crystallize his screen persona as a computer hacker trying to regain his family, only to find the character isn’t as complex or as inviting as it needed to be.

Jackman, in what is an early role, is let down by the script, which asks little of him other than to look alternately confused, angry, frustrated, and scared shitless, often all at the same time, as he tries to outfox the enormously foxy Travolta. Halle Berry, who snagged a hefty paycheck bonus for a single scene in which she bares her breasts to camera (I bet Bryan Singer had wished he’d done the same for her appearance in X-Men!) is purely in this film for a) her sex appeal and b) her ability to be nude, and c) no reason at all. Her character, Ginger Knowles (a throwback to old Bond Girl nomenclatures, perhaps?) is resplendent in all manner of skin tight outfits, but as a character, is as dull as a plank of wood. Berry’s boobs have the best performance of the film, however, and they do virtually nothing but sit there. 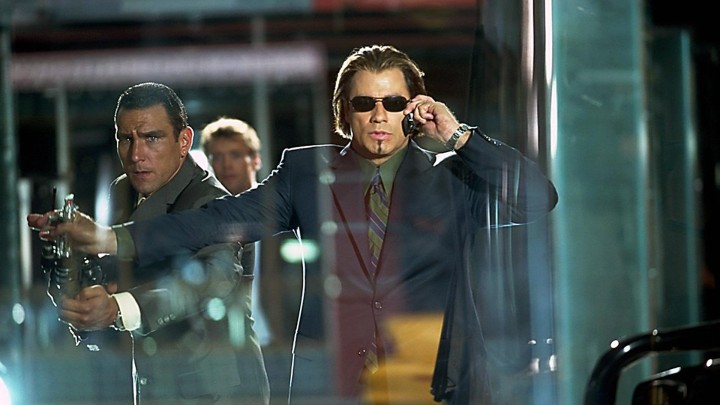 Bit players like Don Cheadle, Vinnie Jones (as a Travolta henchman) and Sam Shepard (as a crooked US Senator) offer minor interest to their parts, with Cheadle probably coming off best as a good guy FBI agent who unravels Shear’s impossible plan within the film’s brisk 90 minute runtime. Director Dominic Sena, who helmed the remake of Gone In Sixty Seconds a few years prior, gives the film’s green-hued veneer of sweaty, slick coolness, and his cast perform their soundbite-ready roles with as much gnashing of teeth and baring of flesh as is humanly possible. The script’s antics even call for a bus to be hung from a helicopter above the streets of Los Angeles, filled with people and a bunch of proximity bombs, just to add some tension and utter WTF moments late in the game.

Yet, for all the budgetary heft at his disposal, Sena’s direction is as average and by-committee as Sixty Seconds was for Jerry Bruckheimer. Sena hasn’t a style of his own, feeling like he can crib from contemporaries like Tony Scott, The Wachowskis and Michael Bay, and although he makes a fair fist of it here, the film’s empty tones and vapid characterizations leave the end result like a slowly deflating balloon. It’s all sound and fury, and very little actual substance. Like a theme park ride you pay overpriced tickets for. If it’s slickly produced yet tension-free set-pieces (although the opening scene is a cracker!) and caricatures of actual people, Swordfish will probably make your day.

Swordfish impressed me back in 2001, but as a work of compelling fiction, either as a thriller, a drama, or a comedy, it lacked any sense of humor, reduced its lead characters to chasmic avatars of human beings, and tried to be way to smart for its own good. The natural conclusion is that, for all its double-speak about “misdirection” (the film’s central tenet), the only misdirection the film enjoys is making us think it’s a film worth watching.