Director :  Neill Blomkamp
Year Of Release :  2015
Principal Cast :  Dev Patel, Hugh Jackman, Sigourney Weaver, Sharlto Copely, Ninja, Yolandi Visser, Jose Pablo Cantillo, Brandon Auret.
Approx Running Time :  120 Minutes
Synopsis:   In the near future, crime is patrolled by a mechanized police force. When one police droid, Chappie, is stolen and given new programming, he becomes the first robot with the ability to think and feel for himself.
What we think :   Robotic misfire treads a well-worn path disassembling humanity’s inhumanity and dependence on machines to do our dirty work. While Chappie himself ia glorious piece of design and CG execution, he’s surrounded by inane characterization and generic plot points that do little to elevate itself. Plus, much of the acting is awful. So there’s that.

Director Neill Blomkamp’s third film as director struggles to overcome fairly basic sci-fi tropes as it meanders through its “robot with a soul” narrative. While he hit the mark with District 9, and found middling critical success with Elysium (a film I liked but didn’t outright love), Chappie has too many familiar elements within it to separate itself from the pack, so to speak. Chappie’s cinematic DNA seems spliced between Short Circuit (an 80’s kids-flick I loved back in the day) and any number of AI-themed flick that have at its heart a robotic protagonist learning just how shitty humanity really is. 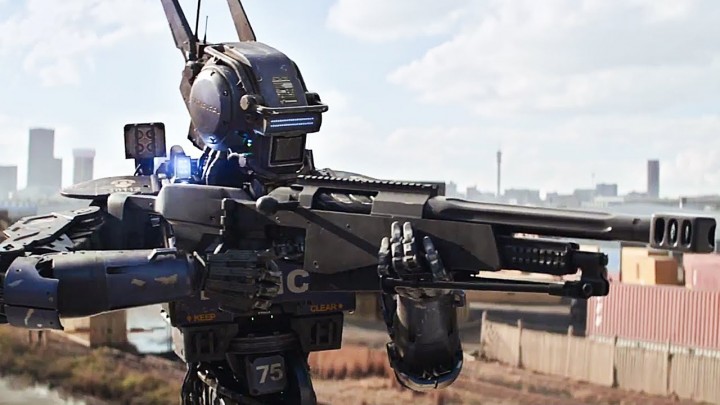 Deon Wilson (Dev Patel) works for robotic weapons company Tetravaal, run by Michelle Bradley (Sigourney Weaver) and alongside fellow designer Vincent Moore (Hugh Jackman). The South African police force has been augmented with robotic soldiers designed to reduce crime (which they do, effectively), but Vincent is jealous of Deon’s designs and wants his own robotic design to be produced instead. After a gang of criminals, Ninja, Yolandi (Yolandi Visser) and Amerika (Jose Pablo Cantillo) are forced to find a large sum of money within a week, they kidnap Deon in order to get him to shut down the machines, not knowing Deon has stolen a to-be-scrapped robot in order to upload a new artificial intelligence programme. In doing so, Deon created Chappie (voice and mocap by Sharlto Copley) a sentient robot that learns things about his world.

With each feature he directs, Neill Blomkamp’s deficiencies as a writer become more apparent. Chappie’s socially charged narrative and junkyard aesthetic has worn thin across Blomkamp’s successive films, as the filmmaker struggles to make his plot and emotion punches land. Coupled with amateurish acting (not only from the trio of gangsters Chappie ends up with, who are in real life a South African punk band called Die Antwoord, but also from old stagers like Jackman and Weaver), Chappie’s attempt at childlike wonder and melancholy understanding at just how shitty humans can be, the film’s depth-charges of character development aren’t as potent as Blomkamp would obviously like them to be. Chappie is co-scribed by Blomkamp and Terri Tatchell, and with the title character’s gradual realization that Ninja and his gang are really no good, the film can’t escape the inherent similarities with the aforementioned Short Circuit. 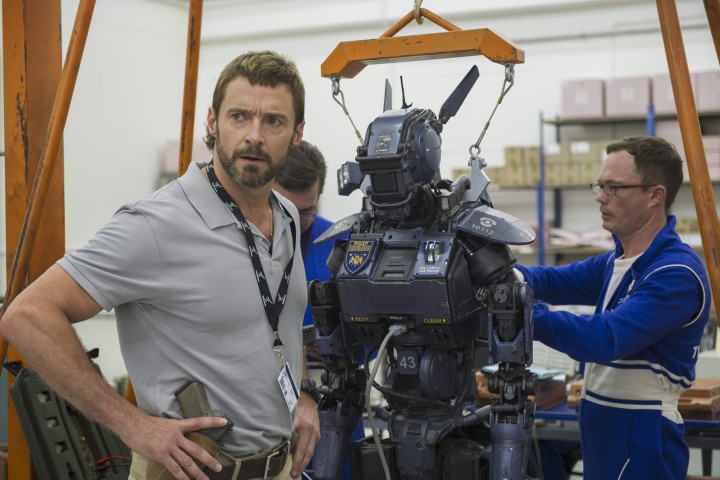 Basically, Chappie is a film about prejudice, about humanity’s inability to accept things different from us. If that sounds familiar, it’s because it is. Considering its well-worn sci-fi roots, Chappie needed to elevate itself in other ways, through characters, perhaps action, or maybe some new style we’ve not seen before. In this respect, Chappie fails on multiple levels. Ninja and Yolandi Visser, the two members of Die Antwoord tasked with leading a fair chunk of this film’s acting, range from average to awful, with Visser especially out of her depth as the maternal member of the gang who sees their robotic accomplice as a child, someone to mother. Dev Patel is solid as Deon, Hugh Jackman is all cheese as Vincent, and Sigourney Weaver is basically a cameo.

The best part of the film is Chappie himself. Using Sharlto Copely’s performance capture and voice, the robot of the film is a marvel of practical and CG design, a seamless blend within the live-action of the film and a brilliant example of what computer animation is capable of these days. Copely gives Chappie a largely imitatory performance, gracefully childlike and innocent (until that innocence is lost, naturally) and although I had trouble connecting with the character at an emotional level, it was still a joy watching him… it, interact with the rest of the movie.

As with Blomkamp’s previous projects, it looks like they filmed most of Chappie at the back of an abandoned industrial estate. The film’s grimy visual tones (matching the human ones, I guess) and omnipresent barrenness of life and joy become tiresome, less impactful than District 9’s slum-lord grittiness due to a deficient script and poor acting, and while the cinematography (by DP Trent Opaloch) is deservedly applauded, it’s that “dirty future” look that “real” sci-fi is supposed to be that appears purposeless. Hans Zimmer’s score is less music and more sound effects, while the Die Antwoord beats within are icy and kickin’. 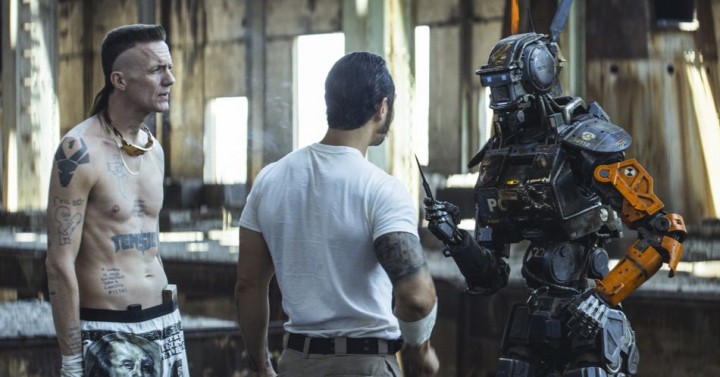 Chappie is a muddled sci-fi opus that starts out well, but quickly overburdens itself with ham-acting and middling plotting, among other things. While the central character isn’t as charming a persona as, say, Short Circuit’s Johnny Five, it’s a valiant effort by Blomkamp to try a story like this at a time when AI and technology aren’t all that far from where the film pitches itself. It’s a warning film, a cautionary tale of tech run amok that leverages cringe-worthy performances with state-of-the-art CG and finds itself misstepping rather than striding ahead. Gallant, yes, but ultimately a bit of a failure.