Director :  Mark Dindal
Year Of Release :   2000
Principal Cast :  Voices of David Spade, John Goodman, Eartha Kitt, Patrick Warburton, Wendie Malick, Tom Jones, Patti Deutsch.
Approx Running Time :   78 Minutes
Synopsis:   An arrogant and immature Emperor of the Incan empire is transformed into a llama when one of his traitorous advisers tries to poison him. He teams up with a local villager to make his way back to the palace and get his kingdom back.
What we think :  Plagued by production problems from the get-go, it’s a wonder Groove turned out nearly as good as it is. Terrific fun for all ages, with zingers, non-sequiturs and plenty of slapstick, Emperor’s New Groove is a sub-80 minute blast of pure Disney fun. The “message” of the film is ladled on for the kids, but it’s nearly buried beneath David Spade’s sardonic delivery and the one-two punch of Eartha Kitt’s kitty-purr voice, and Patrick Warburton’s defining Alpha Male depiction of Kronk. It may not please the serious Disney fans, but it has become one of my go-to movies for a rainy day.

I’m sorry, you threw off the Emperor’s Groove.

Following the period typically referred to as the “Disney Renaissance”, which involved a series of films that launched the Disney studio out of the doldrums it entered during the 80’s, the studio suffered a rather sharp decline. Following the blistering success of Tarzan in 1999, the studio released a for-fans-only sequel to Fantasia, a aniation-mixed-with0-reality project in Dinosaur, and then Emperor’s New Groove. Groove was followed by Atlantis, then Lilo & Stitch (which left audiences confused), Treasure Planet (Robert Louis Stevenson in space), Brother Bear (a man becomes a bear, and a concept copied almost directly in Pixar’s Brave), and finally Home On The Range, a dismally performing series of movies that ended up seeing the animation studio of Disney shut down completely. Many point to Emperor’s New Groove as the begging of the end, seeing the film’s troubled production history and frankly bizarre mix of buddy-comedy and ancient history somewhat incongruous. But does the film deserve such disdain? Sure, it’s no Tarzan, but as a fully animated feature resting on the shoulders of an actor I hate (Spade) and one I admire (Goodman), does it warrant serious reconsideration as a classic of Disney’s canonical cinematic ventures? 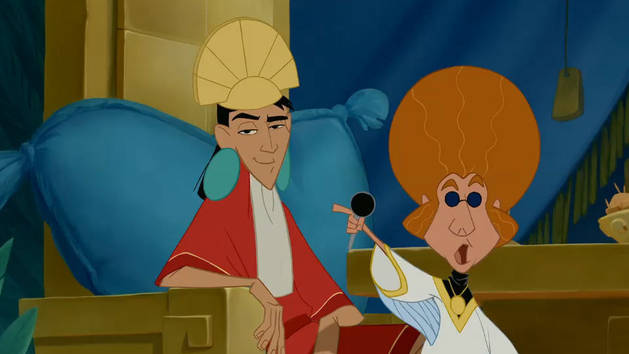 The Emperor’s New Groove began life under the working title Kingdom of The Sun, based on an idea pitched to the studio around the time The Lion King was released. It would be overseen by Disney execs Roger Allers and Matthew Jacobs; neither of who would end up working on the film ultimately released. Due to production delays and budget overruns, and the fact that the film was destined to miss its scheduled release date, Allers resigned citing stress. It’s interesting to note that recording artist Sting was hired to pull off a similar job to Elton John in The Lion King – Sting wrote and created a number of songs which would be used, and his wife would document the process in a “documentary” that would ultimately be released as its own film following the studio’s painful decision to retool the project as The Emperor’s New Groove. 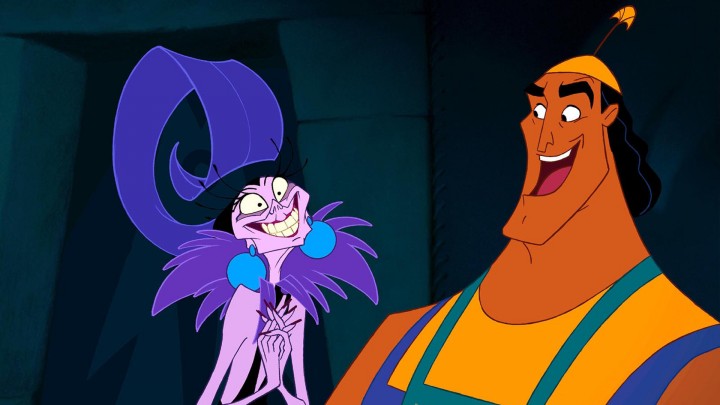 Inevitably, this problematic creator-vs-executive battle would have an impact on the final film, and New Groove shows much of what could happen if a fixed release date simply had to be running headlong into artistic endeavor. That’s not to say the film is poor by any stretch, but its relatively lightweight plot, throwaway characters and minimal use of songs give the impression this is among the “weaker” entries into the studio’s canon. I say that’s not entirely true, but a case could be made for it. 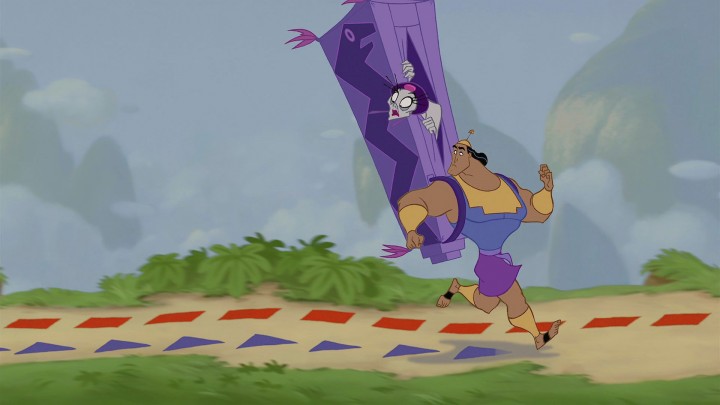 The Emperor’s New Groove sees Incan emperor Kuzco (voice of David Spade, who was bafflingly popular at the time for his idiotic sitcom Just Shoot Me!) as a teenage recalcitrant fixated with superficial pleasure at the expense of everyone else in his kingdom. Rude, arrogant, vain and indifferent to the suffering of his people, Kuzco dismisses those who disagree with him with an attitude of casual psychopathy. One of the leaders of a local village, Pacha (John Goodman), approaches Kuzco to complain that the emperor’s new pool will come at the expense of his village, since it will take up the entirety of the mountain on which he resides. Kuzco doesn’t care, and Pacha is booted from the palace. Meanwhile, scheming adviser to the emperor, Yzma (a terrific Eartha Kitt) and her dimwitted associate (read: boyfriend) Kronk (Patrick Warburton, typecasting himself forever with a single role) plot to kill Kuzco and claim the throne for themselves. Things don’t go to plan, for Kuzco is instead transformed into a llama, and must team up with a distrustful Pacha to return to the palace and take back power from the usurping Yzma. 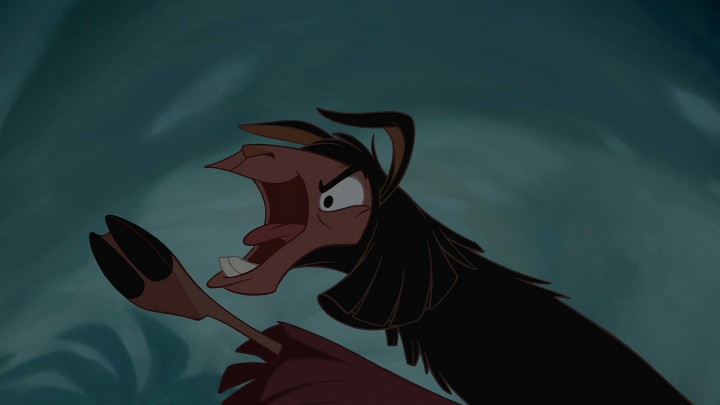 I love this movie, it’s fair to say. I didn’t initially, though – New Groove is a film I didn’t appreciate during its brief cinematic run, and only came to love after numerous DVD screenings with my brother (who loved it from the start). The film’s breakneck speed and cavalier attitude to humor, from song puns, pop-culture meta gags (the fourth wall isn’t something this film concerns itself with, to be honest) and physics-defying magic amount to a hodgepodge of laughs and strained morality that some will find simply too adhoc to work well. I admit, New Groove requires a certain sense of humor to “get”, and if you don’t “get” this film, don’t worry. Plenty of others do. The story is actually fairly standard – a guy you hate and a guy you know is okay have to overcome their differences to thwart the plans of a scheming villain you love to watch work but secretly hope gets their comeuppance. It’s age-old Disney stuff, and although brushed with bright colors and a fresh coat of star talent vocals, it just works in spite of its bordering on cliche. 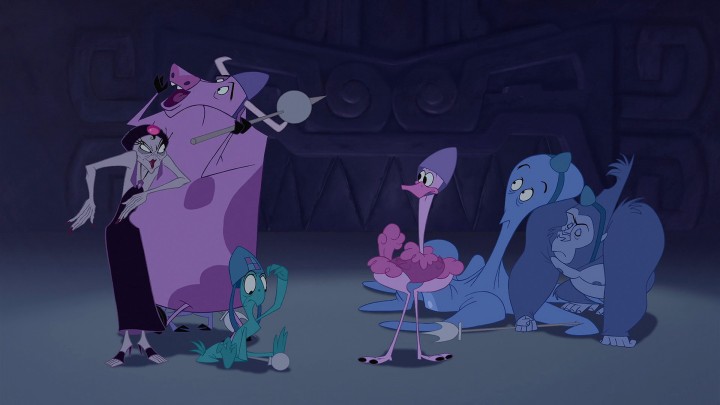 The best part of this film is Eartha Kitt’s Yzma, followed closely by Patrick Warburton’s Kronk, who gets the lions share of the best lines and gags. Kitt’s vocal style is deliciously evil here, as she grows increasingly frustrated by both Kronk’s ineptitude and moral center, and continual coincidence in thwarting her plans to be rid of Kuzco. New Groove is primarily a slapstick comedy, mixed with buddy comedy, and the hijinks are derived mainly from Yzma’s Looney Toons-esque plot hatching and failure. Warburton’s performance here (following a brief but cult appearance as televisions The Tick) cemented his ability to play the dull-but-smart Alpha Male Cliche, deep baritone and all, and it’s a part he did so well, he’s become known purely as that guy in every film or television show he’s appeared in since. 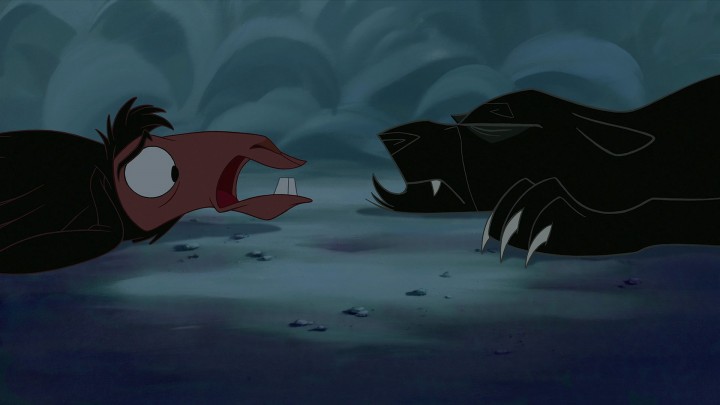 David Spade was initially the reason I couldn’t stand this movie, largely because of his association with Adam Sandler, and his inane portrayal of a complete douche on Just Shoot Me!, an inexplicably popular sitcom which also happened to star fellow Groove cast-member Wendie Malick. Although here, Malick plays a tough-talking mother of two to Pacha, and is far from the uppity shallow slut she played on television in that show. Spade’s Kuzco is indeed a thoroughly unlikeable dude, and he’s meant to be; the trouble I had is when Spade has to transform the character from being inordinately “bad” into being reformed, and without conviction I can say he largely succeeds in spite of me still wanting to punch him in the face. John Goodman’s Pacha (Goodman would also voice a Pixar character, Sully, in Monsters Inc the following year) is the hopeful yearning Good Guy we all strive to be; Pacha isn’t the most rounded character, and is fairly simplistic in motive and development, but Goodman makes him work. 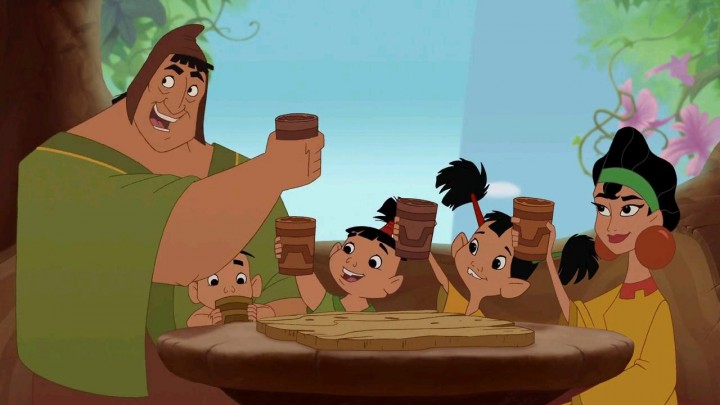 Groove’s sense of playful fun is evident from the opening frames – a delightful montage of Kuzco’s life and claims of perfection, set to Tom Jone’s “Theme Song Guy” ripping out a rendition of a narcissistic song to the title character. The film breaks the fourth wall, delights in not bothering to explain plot holes (it assumes it doesn’t have to) and dips a toe into the “zany” world established by Bugs Bunny and Daffy Duck many decades prior – it’s frantic, slapdash fun with a decent budget. For a Disney film, there’s also blessedly few songs to contend with – Sting’s only remaining input into the film would be the Oscar nominated “My funny friend and me”, which hangs on the closing credits (and has thematic input into John Debney’s terrific score). 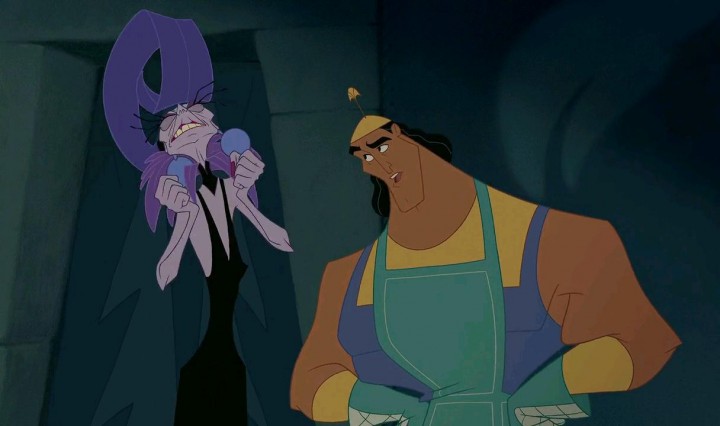 I’m well aware of the Disney fanbase who despise this film purely because it’s so silly. Those clowns can’t see it for what it is: a playful, fanciful jaunt into slapstick comedy that made a change from the heavy, adult-themed features to come immediately prior (Dinosaur and Tarzan, especially) and frankly, it’s a blast from start to finish. It’s not strong in character development, and its humor ranges from delicious (Yzma as a kitten, which is hi-larious!) to uneven (a sequence inside an Incan diner is as inert a comedic sequence as you’ll ever see) to gut-busting (I’m sorry, you threw off the emperor’s groove), but it moves like a freight train of comedy, unstoppable and fast. And the film is barely over an hour long, including credits! It’s not exactly a trudge to get through. So I often wonder why people point to Groove with a frown on their frowny faces. 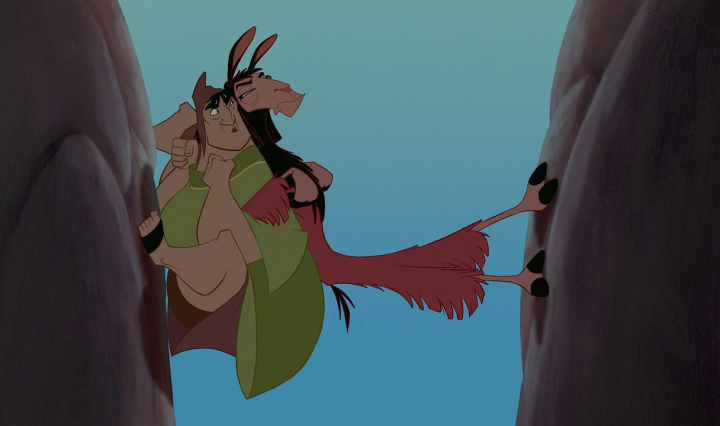 Look, if you’re after a good time filling in a Sunday afternoon out of the rain, you could do a lot worse than The Emperor’s New Groove. It’s not the most polished film Disney ever released, nor is it swamped with the acclaim of the films preceding it, but it delivers more than a few chuckles and some sweet-natured comedy and if that’s all you need, you’ll be happy. Groove yourself into the mood for this film, and you’ll find it a sweet treat of delicious cinematic slapstick that deserves more than it gets.