Director :   Denis Iliadis
Year Of Release :   2014
Principal Cast :   Rhys Wakefield, Ashley Hinshaw, Natalie Hall, Rhoda Griffis, Logan Miller, Marla Malcolm, Megan Hayes, Chrissy Chambers, Colleen Dengel, Suzanne Dengel, Chrissy Chambers, Max Calder.
Approx Running Time :   96 Minutes
Synopsis: At a party, a freak meteor crash sets off a series of time events that cause the participants to confront their doppelgangers.
What we think :  Vividly obnoxious in its visual style, +1 is all Big Ideas and often Poor Execution. It’s a shame, because I felt this is a film that could have taken the Party Movie genre, or the Sci-Fi genre and tipped it on its head. When all’s said and done, there’s nobody to like in this movie, and nothing enjoyable about watching them.

Time travel is a bitch.

+1 isn’t a typical film about time travel. Hell, it’s not a typical film, leastways not by my standards. As a kinda frat-party-mixed-with-Donnie-Darko, +1 (or Plus One in some markets) has a unique and truly frightening hook, but often squanders it with inept direction and a predisposition not to explain what’s going on. Oblique to a fault, +1 runs afoul of genre conventions and trying to stretch itself too far, if that’s possible. Did I enjoy it? Yes, but with caveats.

+1 has all the cliches of a bad party film a la American Pie or Project Zero. The lead character is a guy whose relationship with his girlfriend is on the rocks. He’s accompanied to said party by his oversexed best friend, who has made it a mission to score as many… and I’ll try not to sound too misogynistic here…. as many “hot babes as he can”. Then there’s the “girlfriend”, a  mournful, stare-at-the-stars type who willfully tries to make the leading man both jealous and angry in order to prove her point. Oh, there’s the “drug-addled moron”, the “token angry black guy”, the “slutty girl who isn’t picky”, the “wallflower type who is only there to make up the numbers” and the “typical party boy out for a good time” – all the Party Film cliches are here. Where +1 deviates a little is in the fact it’s not a comedy, a romantic comedy, or even a straight up drama. Marketed as a horror film, +1 features more sci-fi elements than thriller or horror elements, although its late stage blood-a-thon does veer into horror convention. 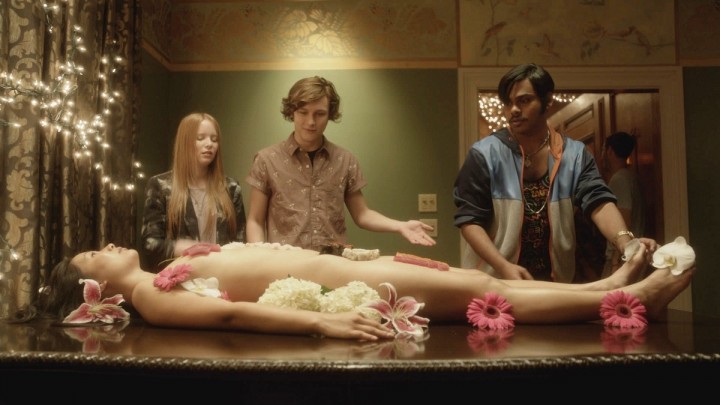 The plot revolves around this group of walking cliches being swept up in some mysterious time slip; a meteor crashes to Earth nearby, and the strange power is exudes travels down the power lines to the house. Periodically, it alters time so that doppelgangers of those attending the party appear suddenly, existing 15 minutes in the past. As the lead character, David (Rhys Wakefield, who played one of the main baddies in The Purge) and his best friend Teddy (Disney Channel star Logan Miller), as well as wallflower Allison (Colleen Dengel) and Teddy’s sexy conquest Melanie (Natalie Hall) try to figure out what these doppelgangers want, or how they can be stopped. In a weird coincidence, every so often time stops again, allowing their “past” selves to slightly catch up with the “present”. All the while, David is trying to reconcile with the waftish Jill (Ashley Hinshaw, Chronicle), who has hooked up with a random dude David doesn’t approve of.

First the good. +1 has a great premise, and although it stumbles badly with scripting and logic chasms, the execution is at least stylish and evocative. I admit, most of the time I had no idea what was happening, but with the rampant nudity, public drunkenness, gradual degradation of the party into a bloody free-for-all brawl, and eventual “oh, I suddenly can explain everything” from one of the film’s central characters, +1 borders on both the ultra hip and the idiotically nonsensical in equal measure. It’s voyeuristic fun, in some ways. Girls get their tits out, there’s a nice scene involving every hetero man’s fantasy, and the final act, where the “past” catches up with the “present” is frightening in some ways. Unfortunately, the film doesn’t earn a lot of its expected chills, and the gobbledygook explanation as to what’s going on will confuse even the staunchest sci-fi addict.

Written by director Denis Iliadis, the film’s time-shift conceit would feel right at home in Doctor Who or Star Trek, but those expecting more of a straight-up horror, or thriller, or sci-fi outing will feel a little confused. +1 doesn’t really know what kind of film it wants to be, so it tries to be them all, diluting the end result. Iliadis had a concept of making David and Jill the lead characters, and having their relationship schism be the catalyst for what occurs (at least, that’s the way it seemed, unless cosmic coincidence is also on the table here) but neither David nor Jill are compelling characters, and you catch yourself asking exactly what David sees in Jill anyway, she’s so poorly written. Iliadis thinks he can get into the brains of a bunch of teenagers (at least, I think that’s the age-group presented here, it’s hard to tell with all the man-children about) but he’s a hack at writing for this age-group, with the lingo and the dialogue crashing to the floor more often than not.

Frankly, the characters in this film are typically abominable human beings. They lack a core truth, existing within the moment and yet feeling like they’re as fake as unicorn shit. Teddy’s as close as we get to somebody with actual emotional weight behind him, and he’s a secondary character! David, played by Rhys Wakefield, is hugely similar to Dawson from Dawson’s Creek, all huge forehead and arched eyebrows. Oh my, those eyebrows. Ashley Hinshaw’s role is horrible – Jill is the least attractive female in the film from a connective point of view for the audience. She’s harsh, a bit of a bitch, and least likely to actually think about anyone other than herself. We’re told what to think throughout the movie, via the clunky script, with neither the characters or the story earning points as they go.

+1 is also an exceptionally visual film, and I say that in the sense that it’s very much like a Danny Boyle acid trip: hard to explain, lots of freaky effects, and plenty of close-up and mid-range shots never quite giving us the “full picture” of what’s going on. This damnable aesthetic makes for a discombobulating experience, I must say, although in terms of sacrificing the story for the look of the film, Iliadis has stretched himself too far. It’s all visual, all the time, and the film can’t breathe on its own merits without some cool special effect. Truth be told, I’m not quite sure how they pulled off a lot of the effects in this film. Cast roster would suggest a few twins were given payment for appearing here (sisters Colleen and Suzanne Dengel play the past and present iterations of the same person, for example) but exactly where the line is blurred I couldn’t spot – kudos for that, I guess.

Generally, +1 is a frustratingly inexplicable affair. The film doesn’t explain itself at all, really: in the end we’re left to fend for ourselves in working out exactly what happens, and that’s annoying. The film is horrible towards women – almost none of the female characters aren’t sexualised terribly in some manner by the closing credits, which is frankly appalling – and the soft-core horror aspects aren’t handled at all well. Logic gaps, such as characters figuring out what’s going on with the bare minimum of information to go on, is forehead-slapping stuff indeed, and as such, took me right out of the movie just when things were looking up. Ultimately, I can only recommend +1 on the strength of the premise, and some of the nice visual effects littered through the movie, but everything else is a slush of tits, anger and WTF moments that don’t amount to much at all.