Director : Francis Lawrence
Year Of Release :  2014
Principal Cast :  Jennifer Lawrence, Josh Hutcherson, Liam Hemsworth, Woody Harrelson, Elizabeth Banks, Philip Seymour Hoffman, Julianne Moore, Donald Sutherland, Natalie Dormer, Sam Claflin, Jena Malone, Stanley Tucci, Willow Shields, Edgar Wright, Paula Malcomson, Robert Knepper.
Approx Running Time :  118 Minutes
Synopsis: Katniss Everdeen joins the ranks of a rebel force to thwart the dictatorial rule of President Snow in the Capitol.
What we think :  Part 1 of a one-two punch to audience empathy with this franchise – a lifeless, inert example of splitting a single book into a two-film effort that thins out the material and leaves narrative energy aside in favor of stretching extraneous characters across the running time. If you don’t mind watching chess played by others, Mockingjay Part 1 will probably excite, but for everyone else, this is a melancholy bore.

Mockingjay, the third novel in Suzanne Collins’ successful trilogy about a dystopian world in which teenagers battle for the sport of a narcissistic upper class, comes to us as a film – or rather, films – in a manner that once more engenders the discussion, and validity, of splitting a single novel into multiple parts. They did it with Twilight. They did it with Harry Potter. And now, another two-part conclusion to a story that probably warrants only one; at least, that’s my view, because I have yet to truly embrace or enjoy a single one of these Hunger Games films. With one hand clutching her Oscar, and the other speed-dialling lawyers in the wake of The Fappening, Jennifer Lawrence’s final contractual obligation to this franchise is nearly up, but in order to get to the meaty (we hope) Part 2 of this cash-grab, we need to wade deep into the muck of Part 1. So deep breath, folks, as we take apart Mockingjay – Part 1, the nearly-almost-kinda final episode in this big-budget turkey known as The Hunger Games franchise.

Lawrence once more plays Katniss Everdeen, the hopelessly overburdened warrior-woman who threatens to topple and entire governmental structure almost on her own. After surviving two Hunger Games, the latter concluding with her destruction of the habitat’s forcefield (see Catching Fire), Everdeen is taken to a hidden district, where a population rebels are trying to incite a rebellion against the Capitol. She is persuaded by the leaders of this group, President Coin (Julianne Moore, far out of Oscar contention here) and Plutarch Heavensbee (the late Philip Seymour Hoffman in his final screen role) to become the symbol of the resistance, something Katniss is initially reluctant to do. With President Snow (Donald Sutherland having a grand time as the chief nasty) ordering a more brutal regime against those who resist the Capitol’s rule, the rebels begin their plans to lay a final, all-or-nothing assault against those who would keep them downtrodden and not masters of their own destiny. 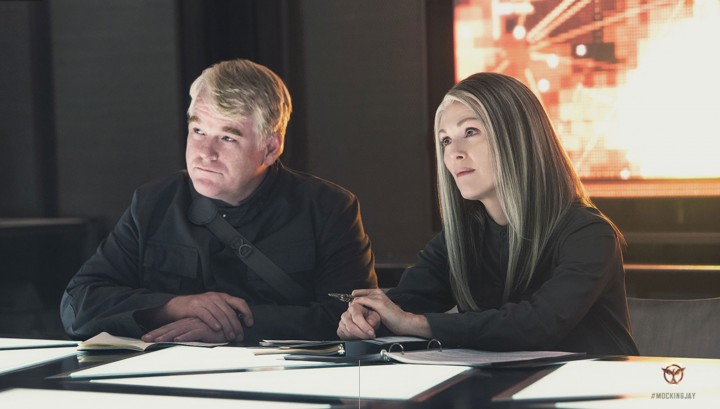 I guess if there’s one thing I’m thankful for, it’s that Mockingjay Part 1 does not take place inside a Hunger Games arena. Eschewing the titular games for more story development, Mockingjay Part 1 focuses on the trials, emotional arcs and subplot manipulation of the inhabitants of Panem, as the rebels begin to mount their challenge to President Snow’s authoritarian rule. No doubt the payoff comes with Part 2, for Part 1 is a largely actionless affair, consigned to the “calm before the storm” cliche most “part 1” films suffer from. Set all the pieces in place, then wait for Part 2 to unleash fury. Frankly, it’s stupefyingly inadequate, in parts, this movie. Exactly why the studio felt the need to split this film in two feels like a blatant cash grab – there’s almost no artistic merit to divide and conquer here, what with the copious casting for the roster of characters ensuring that, for the most part, the people playing the parts remain bigger than the parts they play. 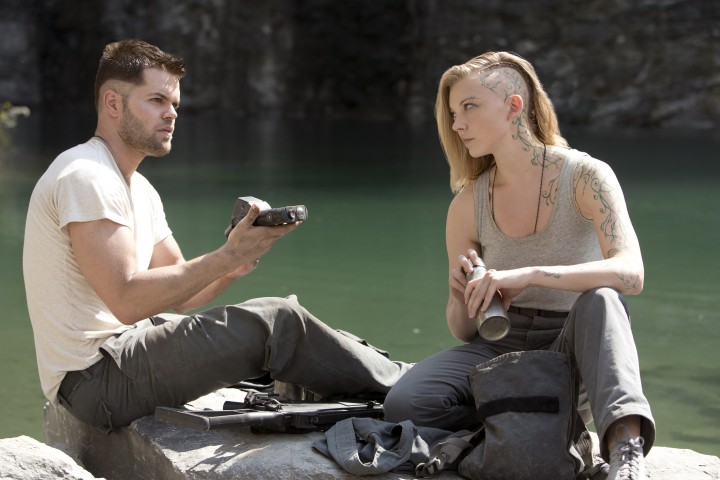 Ahh well, I guess beggars can’t be choosers, so if a studio is gonna throw a bucket of money to put a film up on the screen, I night as well watch it. Directed by Francis Lawrence (no relation to Jennifer), who also helmed Catching Fire, as well as I Am Legend and Water For Elephants, Part 1 has a similar tone and feel to it as the previous films, although it does tend to go darker into the psyche of the characters. Whereas the previous films played with Katniss’ heroic aspects, her conflict for being forced to participate in the Games, Part 1 of Mockingjay leaves her flapping about like a wet fish with feelings for Peeta (Josh Hutcherson) and Gale (Liam Hemsworth, still appearing to act like a wooden plank once more), wrapped in her initial refusal to be “the icon” of the rebellion. Apparently, heroes aren’t born great, they have greatness thrust upon them, which makes Katniss resentful of her fate. 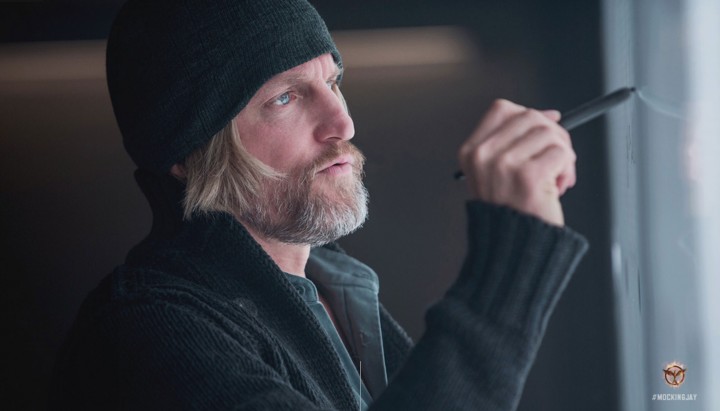 In one aspect, Mockingjay Part 1 is a film about people, much moreso than previous installments, most of which were filled with nameless, faceless cannon-fodder types who performed their various death scenes with requisite skill. The arc of Katniss is obviously the focus, but the larger picture starts to come into focus as Peeta seemingly betrays all that Katniss was standing for. Lawrence and Hemsworth have more time to shine together here than in previous films (not saying a lot, they have the chemistry of dry fish) and as Katniss is forced to recognize herself as a flashpoint for the rebels, Lawrence injects her with an inner strength, a strength we saw briefly in the previous Games adventures. The larger spectrum of the cast do their job well – franchise stalwarts Banks, Harrelson and Sutherland have their work cut out rising above the desaturated color palette and monotonous intonations of doom – and there’s more than enough of those. 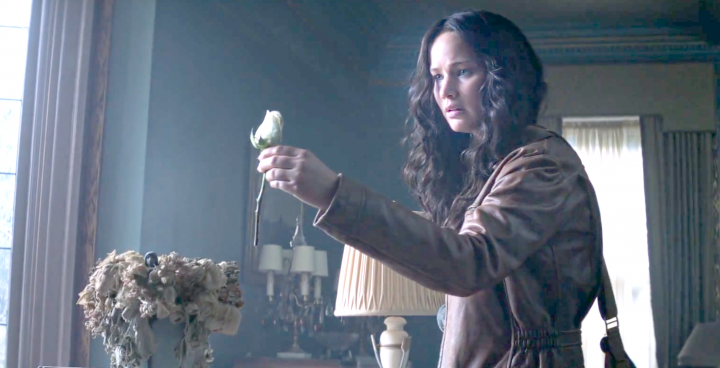 Newcomers Natalie Dormer (formerly of Game Of Thrones) and Julianne Moore are solid if remarkably bland in their respective roles of President Coin and Cressida, Moore particularly so. An actress of Moore’s capacity should normally give such a role presence, although this time such potency is lost amidst garbled pseudo-politics and the kind of rambling plot mechanics that scuttled the Star Wars Prequels. Nobody really gives a shit about the politics of a scenario; just get on with it. Anyhoo, you’d be forgiven for thinking everyone had a case of the sads making this movie, with nary a smile, giggle or casual guffaw to be found – I know, it’s a rebellion against a brutal autocratic regime, and there’s no time for japes, but man, what a depressing excuse for a movie. I thought blockbusters were meant to be fun. At least Lord Of The Rings threw in an occasional dwarf gag. 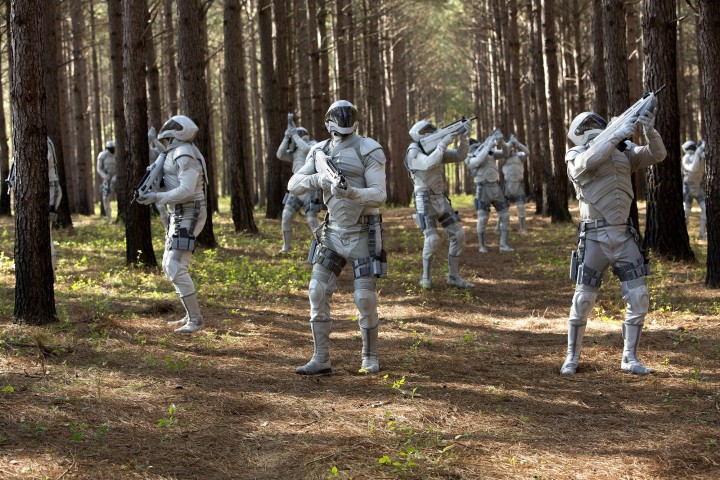 Much of Mockingjay Part 1’s resolutely melancholic tone is its inclusion of the late Philip Seymour Hoffman. Hoffman, who died while Part 2 was in production, hovers through this movie like a ghost; in terms of watching him, perhaps the distance of time hasn’t yet worn out the awkwardness of having a deceased actor still playing a part, although in saying that, his role of Plutarch Heavensbee ain’t a patch on Heath Ledger’s Joker. Hoffman is solid, charismatic, and charming, and I guess if this is his final bow then it’s not the worst. 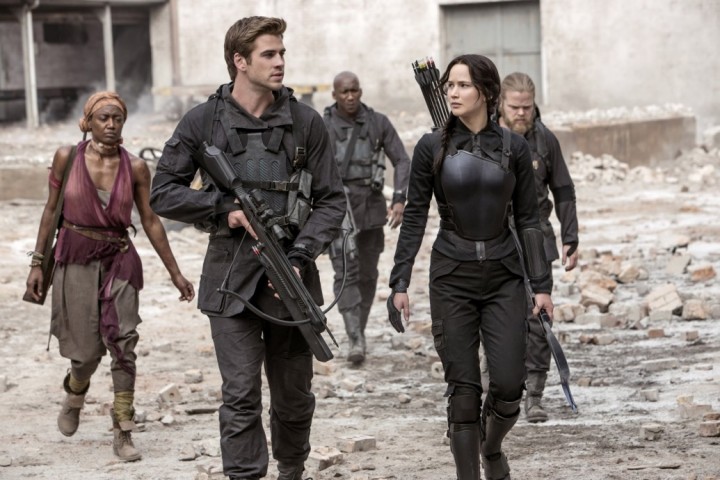 What little action there is, is given dynamic heft by Francis Lawrence’s deft camerawork. Much of these sequences are hand held (ugh, again), even when they probably don’t need to be. Even so, the film never attains that “shakycam freneticism” which blighted the first movie. Lawrence has a remarkably sensible sense of framing when it comes to action, and his editing, pacing and refusal for quick cuts makes me thankful he’s the one in charge here. Instead of an overexposed explosion fest, Mockingjay’s restrained style magnifies the events of the story as they progress. It’s just a shame that we have to wait twelve months to find out what happens next. 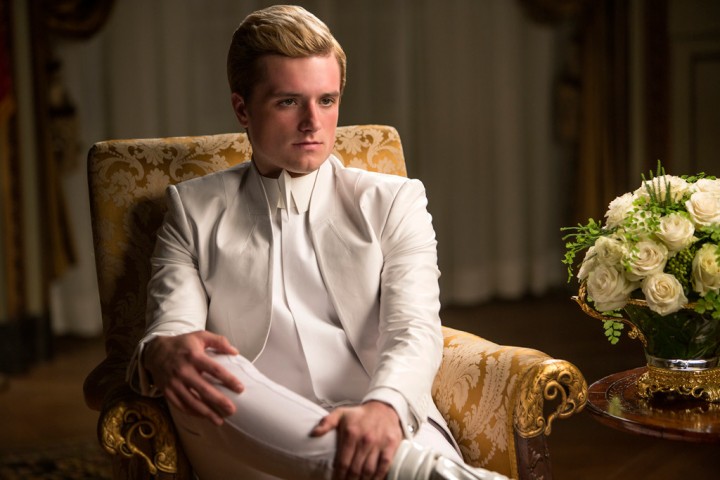 In terms of a spectacle, I found Mockinjay Part 1 lacking. While it strives for a widescreen feel, the film feels constricted, less epic than it’s predecessors. This isn’t so much the fault of Lawrence, or even the screenwriters (Danny Strong and Peter Craig perform the duties here), but rather the demands of the character development. Giving credit where it’s due, Part 1’s focus on character is its strongest selling point, although whether you go with the characters on this mopey, self-indulgent journey is a decision you’ll have to live with. Me? I found it decidedly rote, plodding and generic. Katniss’ love-triangle relationship with Peeta and Gale lacks spark, in either direction, and even the usually hilarious Woody Harrelson appears to have been neutered utterly, while Elizabeth Banks’ energetic, vapid and garish Effie Trinket is reduced to a bit-part here. There’s only meandering intellectual pontificating; responsibility, destiny, fate and whatnot all gets bandied about as Katniss rises into the “mockingjay” the rebels want her to be. The face of the uprising. 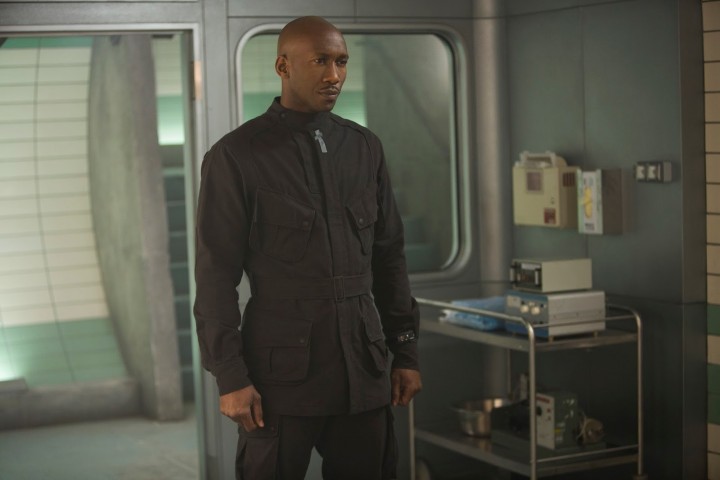 As the franchise slowly crawls towards its no-doubt-fiery conclusion, Part 1 of the Mockingjay double-act is decidedly routine, decidedly mournful. In trying to build character, it mitigates soul, limits heart, as a stoic Jennifer Lawrence struggles to imbue Katniss Everdeen with even a shred of resolute dignity. Anger, sure. Vengeance, yeah. But dignity? A sharp-edged character? Barely. Not even. Mockingjay Part 1 is a slow-burn build of audience anger towards those who kill without compunction, with no payoff. If you’re thinking about giving this one a shot, wait until Part 2 is out, and watch them both consecutively. Part 1 is labored and tiresome in wearying melancholy, and although underneath all this gloom is a sliver of hope, it’s buried too far down to warrant much excitement.