Director :   Bobby Farrelly + Peter Farrelly
Year Of Release :  2014
Principal Cast :  Jim Carrey, Jeff Daniels, Laurie Holden, Kathleen Turner, Steve Tom, Rachel Melvin, Robb Riggle, Paul Blackthorne, Brady Bluhm, Dalton Gray.
Approx Running Time :  110 Minutes
Synopsis:  Lloyd and Harry embark on a road trip to locate Harry’s adopted daughter, in order to obtain a new kidney from her.
What we think : Look, I love Jim Carrey, and probably always will. It’s a shame he’s sullied himself with this rubbish, a blatant cash-in on one of his earlier films that, frankly, didn’t need to be made. Uneven, wildly unfunny in most parts, and filled with the same kind of juvenile humor that made the first film work (but, for whatever reason, doesn’t here!), this mild, inadequate sequel will make you wish for the days of Liar Liar and Ace Ventura.

Ahh, reminiscence. If only things from our youth were still just as good now. Dumb and Dumber To, the long-awaited Jim Carrey/Jeff Daniels sequel to Dumb And Dumber, is based almost entirely on how funny you remember the original, only without the charm, the casual 90’s idiocy and the laugh-out-loud antics of a pre-“I’m a serious actor” Jim Carrey. Dumber To, a sequel lacking grammatical accuracy as well as any semblance of humor other than toilet gags and the aged Carrey trying to recapture his youth, I found this effort a tiresome, beleaguered, strained film hoping to boost more than one flagging career. 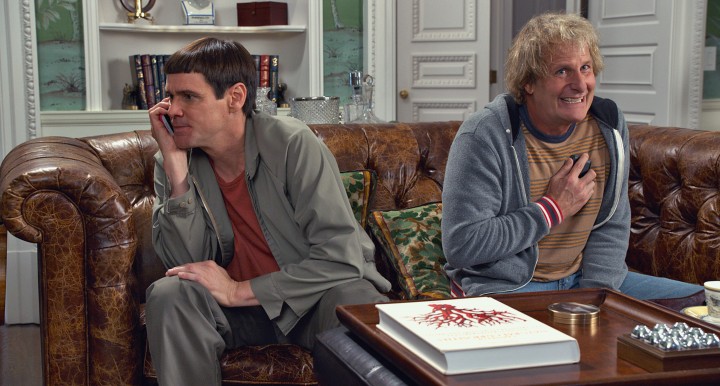 Carrey and Daniels reprise their iconic roles of Lloyd and Harry, as they track down Harry’s illegitimate daughter (Rachel Melvin) to ask if she’ll donate a kidney to her dad, who needs one. A series of road-trip set-pieces thread the thin narrative together via Carrey’s inane mugging – I think the guy’s lost his mojo – and Jeff Daniels’ wretched homeless-man parody, Dumb And Dumber To vapidly hones in on the most idiotic, inane moments of improvised comedy seen in a film this year. The Farrelly brothers’ skill-set has diminished since their 90’s zenith, as they struggle to bring the same kinetic comedic timing to what is, obviously, a cash-in job for all involved. 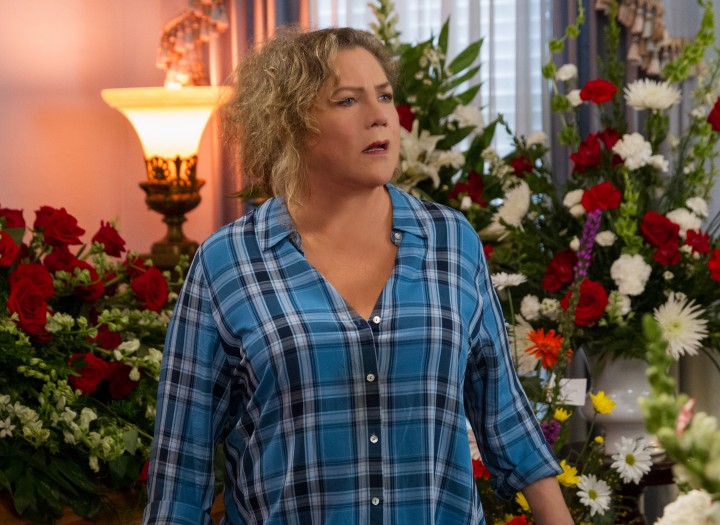 Okay, so I’m a bit harsh on this film; no doubt there’s people out there who found this a laugh riot, and there are a few minor chuckles (a cat farts out bird feathers, which I actually laughed at), I’ll concede that, but on the whole I found this more one giant eye-roll of gross-out slops and politically incorrect gag-reflex twitching. As a fan of the original film (yeah, I am) and of Carrey in particular, I’m wholly disappointed here. The story is largely terrible, a cobbled comedic pastiche of misdirection, assumption and idiocy: there’s 6 writers credited with this film, and it shows. Plus, you have to wonder how much Jim and Jeff improvised on the spot, adding to the confusion. Harry’s requirement for a kidney is merely the MacGuffin setting the road-trip film off, and it gradually gets worse. 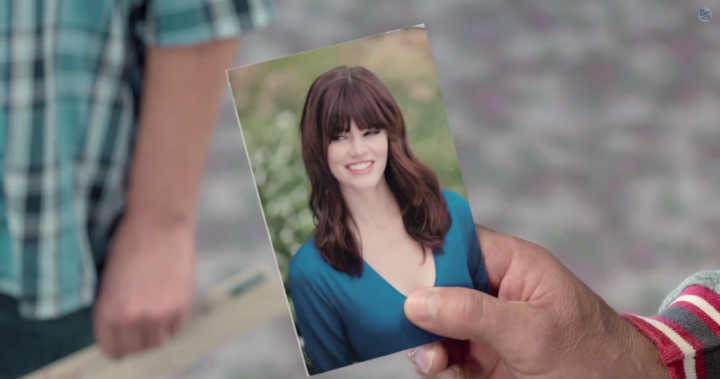 The film relied solely on the audience’s acceptance of Carrey and Daniels as a couple of brainless boobs, and their casual defiance of the laws of logic, gravity, the ability to live through things most people would die doing. Obviously, my tolerance of “stupid humor” has become lower over time, what with the Farrelly’s constant aim at making audiences retch with horror at bodily fluid and physical harm jokes nearly constantly throughout their movies, and Dumber To merely bounces this up into view once again. Ugh. Rob Riggle’s double-act portrayal of the film’s villain is okay, Laurie Holden and Kathleen Turner seem to get the joke, and play this one as straight as they can, but Turner in particular is wasted here. As is Rachel Melvin, who’s appropriation of Carrey’s physical dumbness is alternatively hilarious and idiotic. 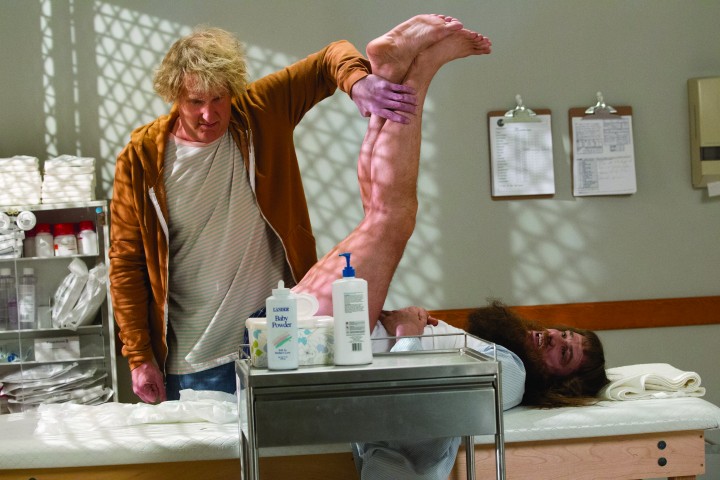 Non-sequiturs and lame ironic humor aside, this film is probably exactly the kind of Jim Carrey vehicle we deserve nowadays. Instead of the riotous Liar Liar stuff that had at least some heart to it, Dumber To scrapes low-brow and actually delves deeper. As a comedy, it’s anemic, and as a film, it’s slipshod to the extreme. Frankly, I’ve never laughed less at a film purporting to be funny. You may disagree, but that’s okay. I’m over the Farrelly’s frat-boy style idiocy. Oh, and stick around (if you’re not already ignoring the film completely by then) for the closing credits, there’s a stinger at the end that actually filled me with horror.